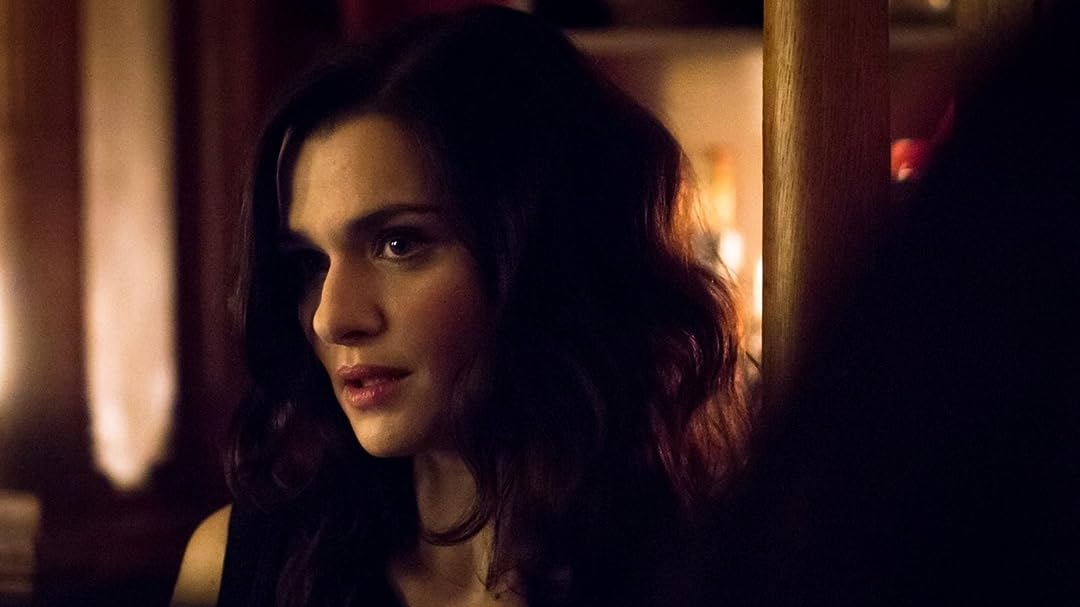 (1,125)5.41 h 32 min2016X-RayUHDR
A mysterious woman with a remarkable past revisits a former lover, complicating the settled life he has built for himself and his wife in Complete Unknown, an unsettling exploration of identity from acclaimed filmmaker Joshua Marston (Maria Full of Grace, The Forgiveness of Blood).

VictorReviewed in the United States on November 3, 2016
5.0 out of 5 stars
Superb Character Driven Drama , Very Original
Verified purchase
I was not sure what to expect when I entered this film. The premise sounded rather intriguing and my curiosity was piqued enough that I decided to give it a chance.

I recognize this will not be a film everyone will enjoy, as the premise is a woman, that has reinvented herself multiple times over, arrives into the life of an old friend through a dinner party. Much of the film is dialogue driven, which attests to great writing and brilliant actors can accomplish.

I liked the dichotomy of both character as there were polar opposites in their approach to life and the lines became blurry about if it would be right or wrong, to simply drop an old life for a new one when the spirit would move a person.

One character, a man that feels trapped in his own world, becomes embroiled at how easy it would be to slip casually into another existence the same way one would change clothes.

There are many great lines throughout and some of them struck me as quite poignant near the end.

Granted, this will not be a film for everyone. This film is lacking suspense, high action, criminal elements or anything of that nature. This is a bit of a thinking film and will not be suitable to everyone's taste.

But the galvanizing questions it raises throughout about the motivations of the lady will leave you thinking as the end credits begin to roll.

CDUReviewed in the United States on February 11, 2021
5.0 out of 5 stars
Watching this film is a test. How INTERESTING are YOU as a person?
Verified purchase
Most reviews say more about the reviewer than they do about the thing being reviewed.

If you understand that how interesting YOU are depends primarily on whether you lead your own life, or you simply follow, then you might understand that you are not interested or bored BY things; you either interest yourself in things or you bore yourself about things. Being interested is a choice. In my opinion, interesting people choose to be interested in things, and they don't blame something if they choose to be bored.

You can see by the distribution of the reviews (many 1 and 2-star, many 4 and 5-star, with very little in between) that THIS FILM IS VERY CONTROVERSIAL, and it does this with hardly any shock value. No violence. No sex. No Religion. No Politics. No exciting Action. Hardly any Love or Romance, certainly not the kind that would be in a Romantic Comedy. In fact, the only comedy, or humor, here, is of a flavor so very droll that most people won't even recognize that it is there. Yet somehow, looking at the 1-star and 5-star ratings, this film manages to create a LOT of strong opinions and strong reactions. Why? Because it is a work of art. Think about that.

As you can see, this is a 5-star review. I found the film intellectually thrilling. No spoon feeding here. This film doesn't set a simple scene for you, then tell you a simple story. It doesn't tell you what to think, what your opinions should be. It just gives you a story that gradually reveals itself, and it lets you explore for yourself what you think about it. Like a good game of chess, some great classical music, or a home designed by Frank Lloyd Wright.

I can put myself in the shoes of the character who has many times changed her name and her occupation. In my case, I have never had a fake name, nor a name change, and I have never created a whole new backstory for myself. Every new career path I have taken involved changing what I wanted people to call me, and completing all the proper training and certification. But what makes me similar to Jennifer and DIFFERENT from most people is that I have been willing to make huge changes in myself at every step. People whose intellects or imaginations are too limited for such leaps will not like this film. Their loss. I would consider anyone who loves this film a potential new friend!
6 people found this helpful
Report abuse

Logain UT AblarReviewed in the United States on December 12, 2017
2.0 out of 5 stars
Good cast but terrible premise
Verified purchase
The cast of this film inspired a viewing. I've been a fan of Rachel Weisz (Alice) for a few years now and Michael Shannon (Tom) was awesome in The Iceman and I liked Mud and Before the Devil Knows You're Dead making me a fan of his too. Then there's Danny Glover and Kathy Bates (as a cute, old interracial couple) and Azita Ghanizada (Ramina) who was good in Alphas even though the show was short lived. We honestly don't get enough of her in front of the camera.

The acting in Complete Unknown is good as the cast delivers on many levels but the problem is the premise itself and a ending that was disappointing (which I won't spoil). Alice is a successful woman in many career choices but with issues. She has a habit of relocating and living under made-up identities to keep others from getting too close to her personally. But as people begin to get to know her false identity, Alice will abruptly relocate to some far off region and make up a new identity starting the cycle over again. Apparently she's done this for 15 years until finding her way back to New York to reconnect with Tom, an old friend/lover that is the last person that knew who Alice really is. This is where the film falls apart in my opinion. Tom is married to Ramina so there is absolutely no way Alice returning to the fold is a good thing for anyone involved except for maybe Alice herself and that's a stretch. Upon seeing Tom again, both pretend as if they're meeting for the first time to avoid awkwardness and explanations to Tom's wife and friends.

True to form of people that can't keep track of their lies, Alice slips up at a gathering of friends to celebrate Tom's birthday. Alice was brought as a guess of Michael Chernus (Clyde) who is a coworker of Tom who had no idea that Alice is Tom's ex from over a decade ago. Alice is harshly condemned for lying leaving her with no other option but to leave the gathering. Tom follows her out because, unknown to the rest of the group, Tom knows who Alice really is...then again, maybe he doesn't. The film begins to feel pointless by the time this scene plays out and no where is it more evident as when Tom asked Alice "Why did you come back?" During the film Tom asks the question three times, the first two instances were interrupted preventing Alice from answering but it's this question that exposes the film. Why did Alice come back? What was the point under the circumstances? Unfortunately, the answer isn't a good one, made worse when the ending of the film plays out proving yet again, that the interactions in the film were indeed...pointless. Alice comes off as a selfish, habitual liar, a scam artist, making a request she has no business making, for Tom to run off with her. Not because she loves him or because she needs him. No, because she feels he's the only person that actually knew her, because he's real in a life that isn't. Alice was hoping for the impossible. I could sympathize with Tom because he's faced with the absurdity of complication that Alice causes by showing up after 15 years. He's married. Married to a beautiful woman that's about to have a go at launching her own jewelry line. He has a job that he doesn't necessarily care for but it's his. He has friends. He has a life, while not perfect as no one's life truly is, it's the life he's chosen. Alice is the lead in the film but the entire time she is nothing more than a complication that should have never been there.
20 people found this helpful
Report abuse

Olga UltreraReviewed in the United States on January 18, 2021
1.0 out of 5 stars
STUPID!!!!!!!STUPID, STUPID!!!!!!!!
Verified purchase
THIS MOVIE HAS BEEN THE WORSE MOVIE I'VE SEEN IN 50 YEARS!!!! I NORMALLY DON'T WRITE REVIEWS BUT THIS IS JUST A STUPID, STUPID, STUPID MOVIE. I WOULD RATE IT A NEGATIVE -100. THE FIRST 15 MINUTES ARE INTERESTING BUT AFTER THAT THERE IS NO STORY, NO POINT, NO MEANING, AND THE ENDING IS EVEN MORE STUPID THAN THE MOVIE ITSELF! WHO EVER WROTE THIS MOVIE MUST HAVE BEEN ON SOMETHING. IM SORRY BUT I MUST SAY IT AGAIN, THIS MOVIE IS STUPID, STUPID AND STUPID. OH AND BY THE WAY, THERE IS NO ENDING.
11 people found this helpful
Report abuse

Barbara RReviewed in the United States on February 14, 2018
4.0 out of 5 stars
Everyone's Fantasy
Verified purchase
One reviewer commented that people can't simply present themselves as a nurse or biologist and be hired. But that happens more often than you'd think. Remember the movie Catch Me If You Can (Leonardo DiCaprio). It was based on a real life serial impersonator, who flew commercial jets, performed surgery, etc, etc, etc, all without creds. I enjoyed this movie. Alice's character unfolds bit by teasing bit, finally making you realize that as shockingly different as she is from you and me, we can all relate to her yearning to escape the hole she's in; her urge to reinvent herself on the fly. I say watch it.
15 people found this helpful
Report abuse

RadhikaReviewed in the United States on December 25, 2016
5.0 out of 5 stars
must watch when sober
Verified purchase
This is a really thought-provoking film. Is it legal and moral to reinvent your personality? Jennifer never committed any crime by faking her identity. In her mind, she 'changed' her identity and is not 'faking it'. Personally, I can connect to her feelings very well. I wish I could change my life as well, but I cannot afford to burn bridges with the people I love. At the end of the film, you ask yourself the question:"Who am I?" Am I defined by my name, job, friends, education, experiences, memories, likes, dislikes, behavior? All of us may probably change one or two things in this list without suffering from serious identity crisis, but what if one were to change all of them?

Very very underrated film.
34 people found this helpful
Report abuse
See all reviews
Back to top
Get to Know Us
Make Money with Us
Amazon Payment Products
Let Us Help You
EnglishChoose a language for shopping. United StatesChoose a country/region for shopping.
© 1996-2021, Amazon.com, Inc. or its affiliates