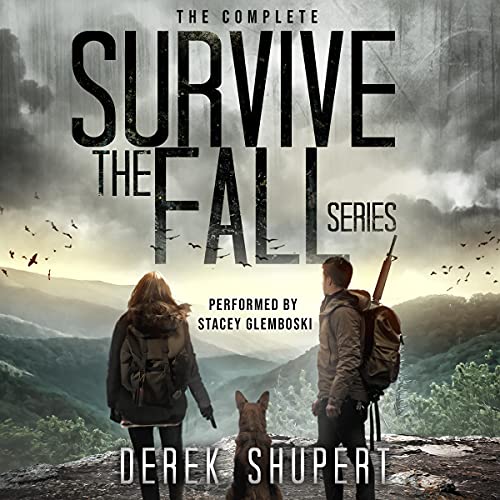 Derek Shupert (Author, Publisher), Stacey Glemboski (Narrator)
4.2 out of 5 stars 631 ratings
See all formats and editions
Sorry, there was a problem loading this page. Try again.

Get the best-selling Survive the Fall post-apocalyptic series now in one complete edition. For a limited time, grab the box set for 60 percent off!

...was all it took to bring down the grid.

The world will never be the same.

Russell Cage would much rather work on his crumbling marriage and life than leave town with his best friend. But the fun weekend planned turns tragic when their plane loses power in the Blue Ridge Mountains. Battered and beaten, Russell emerges from the wreckage alone with no choice but to hike through the mountains and find help.

Teaming up with a prepper, and her faithful dog, Max, Russell battles his way back to his family. But on a road littered with roaming gangs and unscrupulous mobsters, reaching his loved ones in time maybe more than he can bear....

The Complete Survive the Fall series is a riveting action-packed story of surviving the end at all costs. If you like flawed, complex characters and rugged adventure stories, then you'll love this post-apocalyptic tale.

Books included in this box set:

The Complete Survive the Fall Series:

Scroll up and grab your copy now!

Your audiobook is waiting!
Learn more about membership
List Price: $29.95
You Save: $3.96 (13%)
By completing your purchase, you agree to Audible’s Conditions Of Use
Sold and delivered by Audible, an Amazon company

Kindle Customer
5.0 out of 5 stars An amazing story
Reviewed in the United States 🇺🇸 on November 21, 2022
Verified Purchase
The twists and turns are never ending. This is a very well written story. The characters become larger by the page. I hope you enjoy this as much as I have.
Read more
Helpful
Report abuse

G. Evans
4.0 out of 5 stars That was the ending?
Reviewed in the United States 🇺🇸 on September 11, 2022
Verified Purchase
I was so caught up, I couldn’t stop reading these books. Then, it ended. I almost feel like Mr. Shupert was tired of writing, so he just left a few other storylines dangling and it was over.
The reason I only took one star off is because as disappointed as I was with the end, the rest of the books were filled with vivid settings, attention grabbing plots, and main characters who were realistic.
Read more
3 people found this helpful
Helpful
Report abuse

Bookgirl13
3.0 out of 5 stars An action packed journey I won't reread
Reviewed in the United States 🇺🇸 on October 1, 2022
Verified Purchase
I loved the characters: human, canine, good guys, bad guys.
The writing was meh, with an increasing need for the suspension of disbelief as the series progressed. Interestingly enough, the overall writing improved some over the story arc.
The suspense and plot were quite good, especially if you overlook some rather blatant holes. This is definitely a post apocalypse survival thriller, start to finish. Speaking of, the end was great, no question.
-ncv

Randyl JTop Contributor: Camping
4.0 out of 5 stars Non-stop Action!
Reviewed in the United States 🇺🇸 on June 29, 2021
Verified Purchase
This ‘apocalyptic’ novel is actually a non-stop Thriller-Mystery with constant action. It’s non my usual genre in novels, however the intriguing mystery of the characters kept me reading to find out the truth of who the main protagonists, Russell and Sarah were and how Spencer was related. Meanwhile, the reader gets a likely glimpse into life without the power grid! The story would condense well into a super action movie. I had some curiosity as to the author’s frequent use of this phrase:
“Dipping the Chin…”? Chin dipping constantly, by all the characters.
Fast paced and loaded with action. I appreciated the strong female roles. The series most likely draws a greater male audience. I read more for ‘plot’ and followed characters than the violent action scenes. I loved Max, the German Shepherd and the Chapter 24 epilogue was a satisfying conclusion.
I would recommend this series mostly to thriller/crime drama readers, as well as for apocalypse fans.
Read more
2 people found this helpful
Helpful
Report abuse

daneling
5.0 out of 5 stars Love the series, give it five stars
Reviewed in the United States 🇺🇸 on August 7, 2022
Verified Purchase
Second series I have read by Derek Shupert, going to continue to follow this most excellent writer, encourage you to give it a try, I am pretty sure you too will agree with this series a five star rating
Read more
Helpful
Report abuse

Kindle Customer
5.0 out of 5 stars Great Apocalyptic Series
Reviewed in the United States 🇺🇸 on August 2, 2022
Verified Purchase
The characters in this series are easy to get attached to,and to understand. Each chapter had me on the edge of my seat. This series would make an exciting summer block buster for the big screens.
Read more
Helpful
Report abuse

Stephen M Cass
3.0 out of 5 stars It's good enough
Reviewed in the United States 🇺🇸 on July 1, 2021
Verified Purchase
I've read enough post-apocalyptic books recently to say this doesn't really fall into that realm. This is closer to the world of the Purge than anything else.

While I don't judge the writing as harshly as some have, I admit the structure sometimes just felt lazy and even uncomfortable with a good chunk of those issues involving the use of the dog Max. I swear sometimes I got the feeling the narrator wanted to make out with Max.

With those things said, it kept me interested and left enough open for a sequel/parallel series that I might look at if it happens. With the sale price I got this collection under, it was good enough for me to enjoy most of it as a gap read (reading between book collections/series that I do like a lot). I however would never pay anything close to full price for this.
Read more
One person found this helpful
Helpful
Report abuse
See all reviews

mandy
4.0 out of 5 stars Great
Reviewed in the United Kingdom 🇬🇧 on September 28, 2021
Verified Purchase
Love love loved this book, I got so engrossed in the story I have had endless sleepness nights thank you
Read more
Report abuse

lee
2.0 out of 5 stars Poor ending
Reviewed in the United Kingdom 🇬🇧 on July 20, 2021
Verified Purchase
The basis for the story line was ok, perhaps too many sub plots and characters that impacted details. I also felt there were too many questions that went unanswered, especially in relation to the ending. It was as if the author had reached a set amount of words and decided to just finish it up.
Read more
Report abuse

Grant Rombough
1.0 out of 5 stars Don’t bother.
Reviewed in Canada 🇨🇦 on June 3, 2021
Verified Purchase
I’m afraid I must agree with the poor reviews of a few others. Long and overly repetitive,- as at least one other reviewer stated, I only finished because I had the whole series and am always reluctant to abandon something I have started ... although the temptation to do so was certainly there ! The author’s writing style is quite amateurish and cliche -ridden, with frequent use of inappropriate words, repeatedly. ... I was left withthe impression that the writer used a Thesaurus to find a quasi-synonym for a more appropriate term, then set the reference aside and continually usedtthat same poor choice.
Read more
Report abuse

Jack Tinley
1.0 out of 5 stars It's A Survival Book Alright. Glad to survive reading it!
Reviewed in Australia 🇦🇺 on September 22, 2022
Verified Purchase
It should have been sent to an editor and the whole set would've been condensed into 1 book.
If I could fing the words "blinding darkness" less than five times in a chapter I was relieved. Too many repeat scenes which made the reading tiresome. Plenty of spelling mistakes and spell checked word replacement which didn't make sense.
Read more
Report abuse
See all reviews