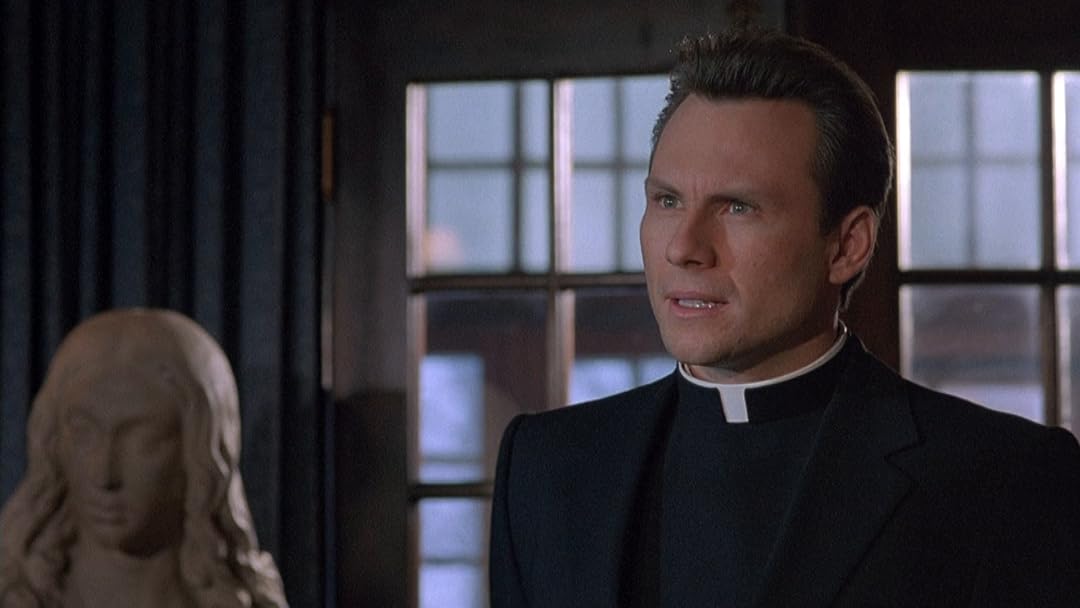 (48)5.21 h 31 min2005PG-13
A worldly and urbane priest is forced to challenge his comfortable existence as an ecclesiastical spin-doctor when he comes to believe in the innocence of a young priest accused of murder. His only ally, a journalist, is also his former sweetheart...

Amazon CustomerReviewed in the United States on October 31, 2020
5.0 out of 5 stars
Great movie and Slater shows his talents, once again
Verified purchase
Very suspensful and great thriller. No crappy action-where the stuntmen and women do all the work. No nudity or sexual scenes. The actors have to act and all did a great job. Usually i can figure out who the antagonist is before the end. But I had no clue.
Having been raised as a Catholic- The Catholic Church is very crooked. Sad but true. All the scandals and coverups by them, unfortunately is real. Like sending pedophiles under the guise of their robes to different parishes or leaves of abscence. Yet their hypocrisy shows by how they treat suicides, homosexuality and so forth. My father was not allowed to take the sacrifice because he had been divorced.
The real theme of this movie is the redemption of Slater, basically being a business man with little faith in God. However, after the accused priest tells him he is praying for Slater, Slater is transformed into the man who he was when entered the priesthood initially-to serve God and find out the true murderer and attempt to vindicate the priest accused of the crime. I think the Director did a great job as well as the writers and producers. I thank them for showing what a real movie should contain.

Nancy A. FoxReviewed in the United States on July 18, 2020
3.0 out of 5 stars
Adequate
Verified purchase
This movie was mildly interesting, but not gripping. I couldn't find anything wrong with it, the acting is adequate, the direction is decent, the dialogue is clear, but I just couldn't get that invested in the story and I could never really care about the protagonist, played by Christian Slater. In fact the only thing I found above average in the film was the performance by Stephen Rea.

A brief overview of the story is that a priest is accused of murdering a young man, who worked at a shelter where the priest does outreach. The accused asks to see a priest, played by Christian Slater, who is excellent at raising money for the church and its building projects, but not so much in tending to the flocks. Christian Slater's character looks into the case, and believes that the accused priest is innocent and asks for help from his old girlfriend who is now a local news anchor. There are a few twists and turns along the way, including a few red herrings, but it quickly wraps up in about 90 minutes, so there's no long term time investment.

If you're looking for a film with a mystery that's not too gripping, and you happen to be a Christian Slater fan, I'd recommend this film. For anyone else, unless you've watched everything else in amazon prime, I'd probably give this a pass.
One person found this helpful

mequinnReviewed in the United States on February 26, 2021
4.0 out of 5 stars
Rediscovered Christian Slater
Verified purchase
I have never been a big fan of Christian Slater, but I must say I have rediscovered him. “The Confessor” is now one of my favorite movies. Slater gave an excellent portrayal of Father Clemsen. The supporting cast, including Molly Parker and Stephen Rhea both performed well. The movie’s story and plot kept me guessing who the killer was until the last 10 mins.
While trying to solve the murder of Eric and Father Andrews, Father Clemsen must deal with his dilemma – does he want to continue facing the demands of his superiors and raise money for the archdiocese or follow his original calling to serve God and work in the parishes? Christian Slater was thoroughly believable in his role. Many movie characters have been faced with a similar dilemma and most found the right path and became a better person in the end. I was happy to see Father Clemsen serve the parish of St. Dominic’s and find his true path.
One person found this helpful

wild oakReviewed in the United States on August 1, 2021
2.0 out of 5 stars
Lame
Verified purchase
By jove, this movie is so lame and boring. Screenplay is weak. Cast performance is weak. Directing is bland. For a church-related thriller/legal thriller, Primal Fear is far far far more superior than this low-budget movie (which was probably shot in Canada). Who is the moron screenwriter that puts in the plot of having a reporter interviewing a suspect in the interrogation room!?! This is exactly the kind of BS in Night Hunter (another super-lame movie along the same vein). And, the father serving tea with full tea set to a guest? Has the screenwriter mistaken this with Father Brown?? Don't waste your time on this dog.

Brian MaesReviewed in the United States on November 17, 2020
5.0 out of 5 stars
A new way to see Christian Slater
Verified purchase
I liked seeing Slater in this role. I also enjoyed the story line. I think it is very easy for people who started out intending to do good and become sidetracked by the demands and allures of 'the world' - but than better to see a reexamining of one's life and one's goals.
One person found this helpful

Amazon CustomerReviewed in the United States on May 16, 2020
4.0 out of 5 stars
Good Movie
Verified purchase
May 16, 2020: This is not a bad movie. Had no clue who did it until the end. I enjoy watch Chris Slater. Did not like the Cardinal's attitude.
One person found this helpful

Wanda MassieReviewed in the United States on June 25, 2018
1.0 out of 5 stars
Awful!!
Verified purchase
What a waste of Stephen Rea's talents! Why do they put the bigger names at the top then when you watch it they have about 10 minutes in the whole dang movie. I think who ever wrote or directed this fell asleep. I'm building my Stephen Rea library and let me tell you if your a Rea fan skip this one. The whole thing was just awful.
One person found this helpful

D. KovacsReviewed in the United States on May 24, 2021
5.0 out of 5 stars
A quiet Canadian gem about learning to be a good priest
Verified purchase
I’ve watched this one more than once — love the three leads, the snow, even the soundtrack. The shoot-out at the end is a bit silly, but I don’t care. For me, it’s worth the watch!
See all reviews
Back to top
Get to Know Us
Make Money with Us
Amazon Payment Products
Let Us Help You
EnglishChoose a language for shopping. United StatesChoose a country/region for shopping.
© 1996-2021, Amazon.com, Inc. or its affiliates