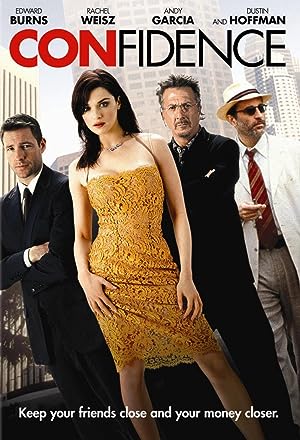 (291)6.71 h 37 min200318+
When professional grifter Jake Vig (Edward Burns) chooses the wrong mark in The King (Dustin Hoffman), he is given two choices: pull off a near impossible heist or lose his life. Needing all the help he can get, Jake brings in beautiful con artist Lily (Rachel Weisz) and a mixed group of "professionals.

KatieHepburnReviewed in the United States on February 10, 2011
4.0 out of 5 stars
Always be confident in the Vig...
Verified purchase
`Confidence' is an `Oceans-11' type Heist movie with its own unique personality. While he sticks to the genre formula, Director, James Foley, moves this film along at a steady, active pace and throws in enough twists and turns to keep us involved.

Ironically, the master mind is a guy named Jake Vig (Ed Burns). Ironic because Mr. Vig (his last name meaning 'the take' or 'the amount charged by the bookie for services rendered') is a `charming, virile fellow' (slang definition for `jake`) who wishes to accomplish his 'gigs' with minimal actual violence. Unfortunately, a heist goes sideways when he and his crew find they have jacked a morally bankrupt criminal called 'King' , who is not partial to letting things slide. In fact, with an act of very harsh measure, King makes it acutely clear what he requires to resolve the matter. Of course Jake refuses and the negotiations begin. This is where the twists and turns commence and the whole thing gets interesting.

The caliber of talent in `Confidence' is amazing. The crew, Brian Van Holt (Cougar Town), Paul Giamatti (Oscar nom.), Rachel Weisz (Oscar winner) and Ed Burns (a celebrated actor/director himself) come off as a tightly knit, intelligent bunch that are as close and trusting as family should be. Two cops on the take (Donal Logue and Luis Guzman) are hilarious hired help who hope to come out ahead. Of course, King (Dustin Hoffman, Oscar winner) has bodyguards galore. Tiny Lister (as Harlan) intimidates politely, yet inimitably, as usual. A young, handsome Latino, Frankie G, displays his chameleon-like acting chops as Lupus, Harlan's understudy. There is a moderate amount of subtle symbolism, in my opinion. Unfortunately, I've been told I have to be hit up long-side the head with it (symbolism) to see it. For example, the name Lupus seems apropos for this particular bodyguard's character, in terms of the word's medical implications. It would be a fun subject for discussion.

The movie, 'Confidence', ends up being a Heist/Revenge movie with some great twists and a surprise ending. I'm not a great fan of Heist films, but I enjoyed my 97 minutes just fine. It was well paced, well acted, and well ... I liked it.

At first I was skeptical of Dustin Hoffman being a mob boss with a sinister reputation, but he turned out to be an enormously entertaining eccentric that made for a refreshing change of pace. I must repent for ever doubting that Hoffman could pull off any roll.
7 people found this helpful

gReviewed in the United States on May 13, 2014
4.0 out of 5 stars
Review for DVD version of confidence
Verified purchase
This is a movie about a group of con artists and a giant size con they're plotting to pull off.---If you like a flick with lots of twists and turns, some edge, some violence and some humor all rolled into one then you'll probably like this. ---Its got a great cast--Edward Burns,Andy Garcia,Dustin Hoffman, and Rachel 4 a little eye candy.--Its light fair yet pretty good with only a couple of overacted scenes . I love the interaction between Burns character and Hoffmans character.--- Its not an academy award winner but its fairly entertaining if you like the subject matter. I found the DVD picture quality fine.---I give it 4 stars
3 people found this helpful

Shaine-mikal whiteReviewed in the United States on July 5, 2019
5.0 out of 5 stars
This film is obviously a remake of The Sting, but it's fun from beginning to end.
Verified purchase
Edward Burns leads an all star cast of sordid characters to try and take down a mob boss to avenge a friend's death. Dustin Hoffman, Rachel Weisz, Andy Garcia, Paul Giamatti, Donal Logue, And Luis Guzman star in this dark comedy crime film.

JIMIReviewed in the United States on October 31, 2020
5.0 out of 5 stars
Great Actors
Verified purchase
This DVD arrived on 10/28/20 in good condition. It opened and functioned with no problems. Looking forward to seeing it with all the top actors. Who can go wrong I hope. Thank You - JIMI

Woon SocketReviewed in the United States on April 28, 2007
5.0 out of 5 stars
Brilliant - a jewel
Verified purchase
I must echo the writer who says s/he has watched this over and over. I too have repeatedly watched this wondeful movie. I come across few people who have ever seen it. This is a movie that begins with Ed Byrnes saying "So, I'm dead." His narration reminded me in feeling of the very fine narration by Nicholas Cage in Raising Arizona or Mogran Freeman's in Shawshank Redemption. There is complexity here in the story and noir poetry in the dialog and in the character's movements on screen. I watched the movie several times before I really felt that "I got it". And the movie became more fun every time I watched it. I have a top ten list of movies that I wander around with - this movie has never left my top ten. I do recommend it - if you liked Rasing Arizona, if you liked Shawshank and you liked House of Cards - you'll like this - but don't don't expect to 'get it" the first time thru - that is part of what makes it so much fun.
One person found this helpful

Timothy RayReviewed in the United States on January 28, 2021
5.0 out of 5 stars
Great movie
Verified purchase
One of my favorite Edward Burns movies.
Based around a group of con artists.

Camera GuyReviewed in the United States on February 17, 2010
4.0 out of 5 stars
Confidence by Edward Burns, Morris Chestnut, Paul Giamatt
Verified purchase
This is a con-mans dream movie. It has you going in one direction while pulling you in another.
There are so many twists in this film that as they reveal themselves you smile to yourself and say I didn't see that coming.
But at the end it makes sense and holds up well with the story.
Edward Burns is great as the conman Dustin Hoffman is unbelievably creepy but Smart as the Strip club owner/ Mob Boss, Rachel Weisz, Andy Garcia round out the cast.
The Sting is a good one, you never know who the players are.
All in all I give it 4 stars out of five.
One person found this helpful
See all reviews
Back to top
Get to Know Us
Make Money with Us
Amazon Payment Products
Let Us Help You
EnglishChoose a language for shopping. United StatesChoose a country/region for shopping.
© 1996-2021, Amazon.com, Inc. or its affiliates