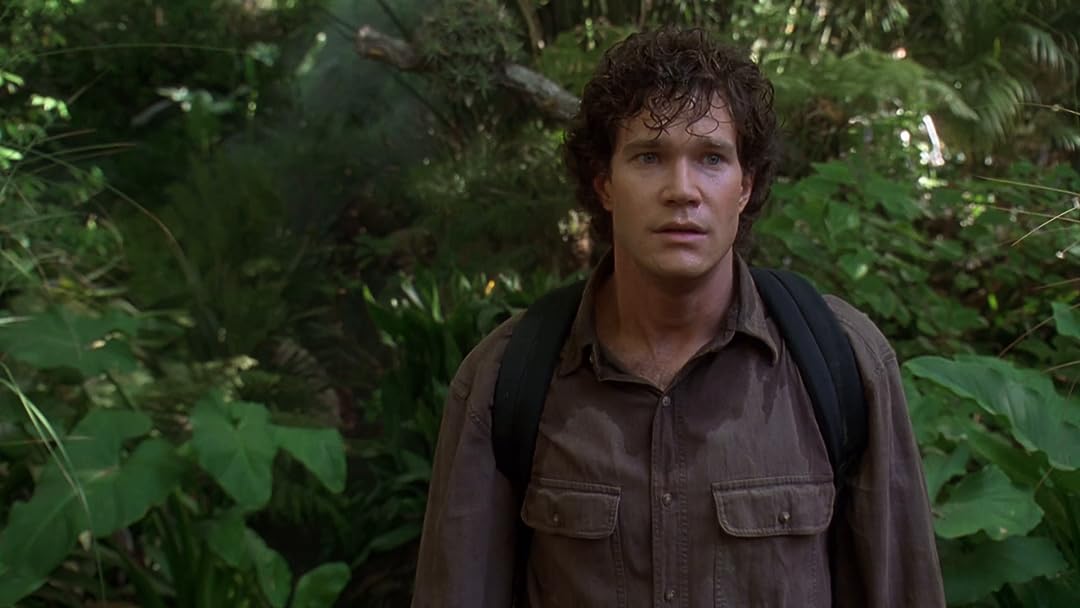 DorothyZReviewed in the United States on October 21, 2017
4.0 out of 5 stars
Fun movie that feels like Diet Spielberg
Verified purchase
In an attempt to capitalize on the mega success of Jurassic Park, Michael Crichton movies became all the rage and Congo was brought to life from a novel he had written ten years before Jurassic Park. Overall what you have here is a fun movie that feels like "Diet Spielberg". The location shots of Africa are stunning but the sound stages although chocked full of wonderfully designed temples and plants still REALLY look like a sound stage. The cast does a great job of playing it straight while interacting with people dressed as killer gorillas with animatronic faces. Laura Linney commits to her character as she does with everything she's in. Amy (the good gorilla that can communicate in sign language) is adorable, even though not particularly realistic, although I will say that for the time the movie was made they did a pretty good job and it's easy to just go with it. Great action scenes and a fun story, which is the hallmark of Crichton's work in general. Props to Tim Curry for camping up his sleazy Herkemer Homolka treasure hunter. Yes, it's a little dated and but it still holds up well and is a fun adventure movie to watch with the family.
34 people found this helpful

J. S. WahlReviewed in the United States on May 1, 2019
2.0 out of 5 stars
Another hollywood abortion of a good story / book.
Verified purchase
Why does hollywood feel compelled to fundamentally alter stories in all the worst ways when those stories come from books? There's hardly any story out there that has a movie and a book and the movie is better. The books are better 99% of the time. Let me give you an example.

I recently reread Congo by Michael Crichton. In it a corporation is hired to find blue diamonds in nature for use in super conductors. (Note that Congo was written in the late 1970's, before the vast, vast majority of people had even heard of super conductors.) The expeditions have to cross the deepest and darkest sections of Africa. Military Coups. Cannibals. Revolutions. Other corporations trying to beat them to the diamonds.

Then, only when they've beat the other corporations to the location with the ultra valuable diamonds, *SPOILER ALERT* do they come across a species of hyper-intelligent almost-gorillas. These almost-gorillas are so intelligent that they literally have a spoken language.

How much of Crichton's great book do we see in the movie? Practically none of it. A story of corporate greed and the almost-human monsters that haunt our nightmares is watered down to a few laser effects and people in gray gorilla suits. *Yawn*.

A. RoseReviewed in the United States on August 6, 2019
5.0 out of 5 stars
A good film that suffered from bad marketing
Verified purchase
This is a 1995 movie that combines legend, sci-fi, and adventure. It starts out with an expedition to Africa looking for a rare blue diamond that can be used in a revolutionary new communications satellite. When the expedition is destroyed by an unknown force, a woman who has a personal attachment to the leader of the group is sent to rescue them. She hijacks another expedition headed by a primatologist who is trying to return a female gorilla to the wilds of Africa. The gorilla, whose name is Amy and that knows how to communicate through sign language, has attracted the attention of a treasure hunter who believes she knows the location of the lost city of Zinj, where legend says the fabled diamond mines of King Solomon are located. So, with this mismatched group, and a professional guide, they begin their journey to the last known location of the missing expedition.
While this movie received mainly unfavorable reviews when it was first released, I found it to be quite enjoyable. The group of misfits are captured by revolutionaries, survive a plane crash, and are attacked by hippos on a river. And this is all before they even arrive at their destination. As far as an adventure film goes, it's right on par. The acting is excellent, with Laura Linney as the woman rescuer with a complicated past (she may or may not have worked for the CIA), Dylan Walsh as the primatologist who has never been in Africa and is totally overwhelmed with the entire experience, and Ernie Hudson as the professional guide who is an expert at what he does but manages it all with a joviality that belies his serious intent. The special effects are top notch for their time. When you first see it, you think CGI, but, upon reading the credits, you realize that the entire thing was accomplished with a group of body actors and puppeteers. Absolutely incredible, and a real feather in the cap of the head of the effort, the incomparable Stan Winston. With a score by the immortal Jerry Goldsmith and a special appearance by the multi-talented Tim Curry, this definitely has its share of moments and fun.
There is a lot of violence in this one, but very little strong language and no erotic scenes at all, so it would be entirely suitable for older kids. Based on a novel by Michael Crichton (he of Jurassic Park fame), this is a good movie that suffered from some bad marketing when it first came out, and deserves a second look by those who may have passed it up in times past.
8 people found this helpful

I'm a bit lost on what direction they wanted to go with... at some points it almost seemed like a kids movie, but the outright gore / violence in others made it want to seem like a horror... It wound up somewhere in the middle between like, Jumanji, Indiana Jones, and like Wendigo ( or go ahead and name a creature feature )

Acting was good ( took me a couple minutes to realize the one guy was the cop from the Crow )... effects were really good... sound was great... I just think the main fall was that the movie itself didn't seem to know what it was doing... Again, one minute, I'm thinking, yeah, this is ok for my kids... and the next, I'm thinking, yeah, no way can my kids watch this... :D

Not to mention, the ending seemed to wrap up AWFUL fast... as if they were like "Ok, just 1 more day on set, so punch it..."... yeah, they concluded everything, but for a quasi-epic style movie... I was expecting a little more finesse with the closure...
11 people found this helpful

Karen J. Reviewed in the United States on June 17, 2019
1.0 out of 5 stars
A chaotic mess
Verified purchase
Although a few brief scenes of Africa were nice, the entire premise of bringing a Koko-type gorilla raised entirely in society, back to live in the wilds of Africa is ridiculous. That gorilla wouldn't last one day. In order to return anything to the wild, they had to have been wild to begin with AND would need to be taught by their keepers how to survive in the wild. Since the premise was silly, I could't enjoy the movie at all. Laura Linney was the only saving grace, although for a "professor", she sure was "multi-talented"-she could white-water raft, shoot surface-to-air missiles, handle machine guns and just about anything else. Lol. Just a bit far-fetched. The entire movie was a fantasy. I couldn't believe any part of it. The ending was especially funny. Planes were being shot down over Zaire but they were going to escape in a hot air balloon. Too funny. I can suspend belief if I am watching something like Indiana Jones, but this? If they wanted me to believe any of it, they didn't do a very good job.
3 people found this helpful

cwe6291Reviewed in the United States on June 12, 2019
5.0 out of 5 stars
Sci Fi Nostalgia
Verified purchase
If you know me, I Loved the Sci Fi channel growing up. All the B Movies and a few A Movies sprinkled in. This was one of the films mixed in. I must have seen it a Dozen times and guess what, after all these years I watched it again. It is something that anyone watching Sci Fi during the 1990s and early 2000s would remember. Does it have any issues? Yes, of course, it does but they are not that big of a deal. The movie is a movie I wish spent more time on the main sight of the story but didn't mind as much as some might. Please give it a chance and I know 90% of you will be glad you did.
3 people found this helpful

Inquiring MindsReviewed in the United States on July 4, 2017
3.0 out of 5 stars
Here we go again - only this time it's baby gorilla that does the acting... What will they think of next...
Verified purchase
There are so many ape/gorilla movies out there, its hard to tell the players without a scorecard. For most part - if you watch just once you might get a small buzz off of action/scenery etc. After that forget it. It beats counting the frogs jumping in your swimming pool (or something like that). The folks did best job expected with such a lame plot - but who cares when there's plenty of popcorn to go around - you get my drift. Sit back and relax -
everybody in the cast gets their 5 minutes of fame. They did manage to keep bad language to bare minimum - otherwise it would have been a complete disaster for sure.
5 people found this helpful

demonsRendangeredReviewed in the United States on July 12, 2021
3.0 out of 5 stars
Entertaining on its own
Verified purchase
Whenever this movie is free with Prime I like to give it another watch. It's a fun flick and one I first saw in my childhood, which I think plays a part of my enjoyment in rewatching it.

I remember when it hit the theaters it wasn't received very well. Most notably I remember the hippo scene being criticized. Also, the gorilla they use is clearly not a real gorilla. But I just enjoy the cast of characters in this film. Ernie Hudson brings great personality and Tim Curry is always bringing some great acting.

Also, I want to note that I read another review stating that this was based on a book. I had no idea of this. It's typical that movie adaptations of books are never as good as the books themselves so I think it's safe to say that if you've read and enjoyed the book then you will most likely dislike the movie. As a flick on its own though it has some charm that's possible because of the talent of the actors they chose.
See all reviews
Back to top
Get to Know Us
Make Money with Us
Amazon Payment Products
Let Us Help You
EnglishChoose a language for shopping. United StatesChoose a country/region for shopping.
© 1996-2021, Amazon.com, Inc. or its affiliates