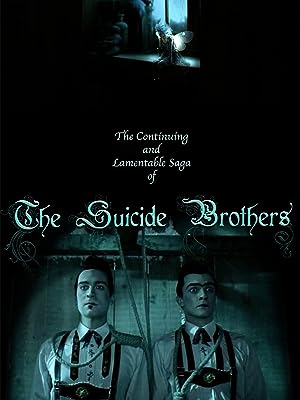 The Continuing and Lamentable Saga of the Suicide Brothers

(10)
6.111min200918+
A fantastic Gothic fairy-tale about two brothers with a death-wish and a fairy companion who tries to show them that life is worth living. Starring Keira Knightley and Rupert Friend.

Included with Shorts TV on Amazon for $1.99/month after trial

Watch with Shorts TV
Start your 7-day free trial
Add to
Watchlist
By ordering or viewing, you agree to our Terms. Sold by Amazon.com Services LLC.
Write review

Kindle CustomerReviewed in the United States on September 14, 2014
4.0 out of 5 stars
Bizarre, hilarious, a teensy bit unsettling
Verified purchase
Short films are often odd, even surreal, and TCaLSotSB is no exception. It's a Grimm's fairy tale on drugs, a story of two brothers who attempt suicide at the same time each day, and fail miserably and rather bizarrely over and over. They're visited by a fairy who tries to get them to understand that life is worth living. Yes, that's pretty much the story. And it's told in a jerky, cartoonish manner that is at once appealingly childlike, and unsettlingly sinister.

The housemate and I watched it mostly because one of the brothers is played by Tom Mison (Ichabod Crane, "Sleepy Hollow") who co-wrote the film with Rupert Friend (He who looks more like Orlando Bloom than Orlando Bloom does), who plays the other brother. I'm not sure how they came up with the concept. I think it must have had something to do with too much Jagermeister and a Katzenjammer Kids marathon, but I could be wrong. Once we got past the weirdness of the piece, we began to enjoy it. It's genuinely hilarious if your sense of humor has gone over to the dark side.

Don't look for any sort of deep meaning here. Enjoy the inspired goofiness.

C. GerberReviewed in the United States on April 12, 2015
5.0 out of 5 stars
A Must See for Dark Humor Fans
Verified purchase
Wow! At first this short is like watching something filmed through absinthe, creepy and green. Eventually it turns to color, just when you think the two brothers have finally seen the light and are going to give up on committing suicide. Unfortunately, that is when the story becomes really dark. The fairy (Kiera Knightly), reads the bottle of poison the two have taken and find out the missing ingredient to finish them off is...
I can't tell you without spoiling the ending, but it was unexpected after their previous unsuccessful attempts at suicide.
I thought it was funny, dark, and lovely and I would recommend it to anyone with a dark sense of humor. The costumes were a hoot, the setting was intriguing, and it was interesting to see these particular actors in such an oddly fantastic short. Be sure to watch to the very end to see the funny dance sequence.

If you enjoy quirky films (such as Wes Anderson flicks), you'll enjoy this short.

Fan readerReviewed in the United States on January 17, 2017
4.0 out of 5 stars
Good
Verified purchase
Ok, no words can't express this, but it's very interesting.

Melissa GReviewed in the United States on October 28, 2015
5.0 out of 5 stars
Funny Dark Humor Short!
Verified purchase
Yes I gave this 5 stars. Clearly I have a dark sense of humor. It's a mix of comedy, Grimm fairy tales, with a hilarious dance number thrown in at the end. I could have died laughing watching those two dance. :D
One person found this helpful

BJReviewed in the United States on October 31, 2013
1.0 out of 5 stars
The Continuing and Lamentable Saga of the Suicide Brothers
Verified purchase
I do not know what I expected but this wasn't it. I like Jonny Lee Miller and try to watch anything I can find with him starring. This was really bad, would not recommend to anyone.
One person found this helpful

Suzanne SchumacherReviewed in the United States on October 25, 2015
5.0 out of 5 stars
Great Short
Verified purchase
This was a great short that I really enjoyed. I am especially fond of Rupert Friend and any/all of his works.
3 people found this helpful

Amazon CustomerReviewed in the United States on January 29, 2016
5.0 out of 5 stars
Unexpected
Verified purchase
It made me laugh hysterically!
One person found this helpful
See all reviews
Back to top
Get to Know Us
Make Money with Us
Amazon Payment Products
Let Us Help You
EnglishChoose a language for shopping. United StatesChoose a country/region for shopping.
© 1996-2022, Amazon.com, Inc. or its affiliates