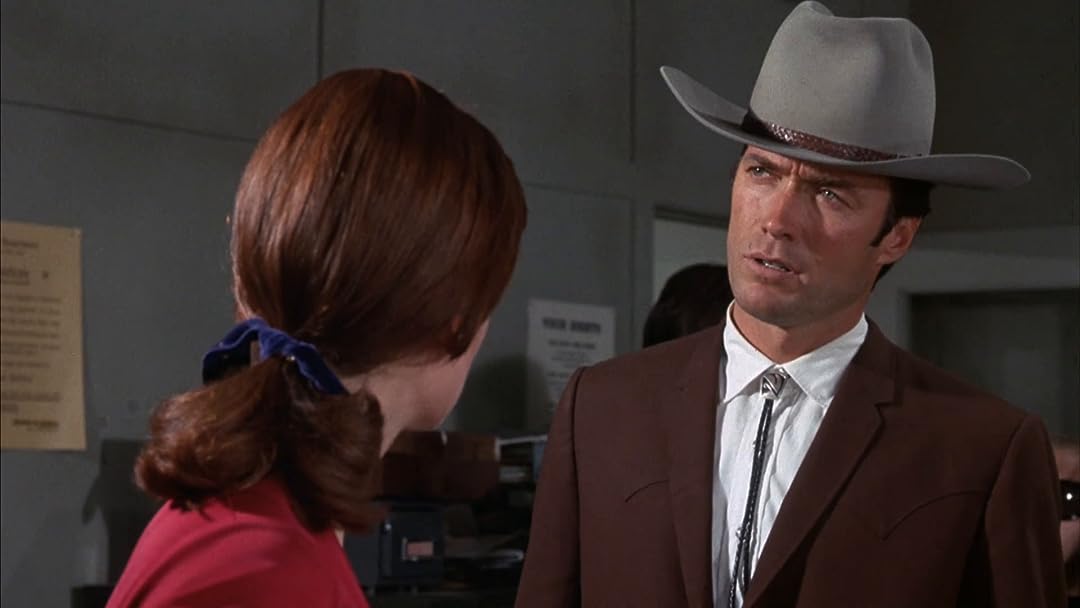 (683)
6.41 h 35 min1968R
Oscar winner Clint Eastwood stars as a soft-spoken, straightforward, Arizona cop sent to New York City to extradite a captured murderer, but when the killer escapes, the hunt is on!

John FowlerReviewed in the United States on December 24, 2021
5.0 out of 5 stars
REVIEW OF THE 2021 BLU-RAY
Verified purchase
‘Coogan’s Bluff’ was released on Blu-ray by Universal in 2015.
Picture quality was about the same (excellent), but that was a bare-bones edition without bonus features.
The new Blu-ray from Kino-Lorber is the Deluxe edition:
-- Two audio commentaries.
-- Newly filmed interview with actor Don Stroud, who plays the villain.
-- 1968 featurette with Clint Eastwood.
-- Clint Eastwood theatrical trailers.
-- English SDH subtitles.

‘Coogan’s Bluff’ was filmed in New York City over seven weeks in Nov-Dec 1967.
Several scenes were filmed atop the Pan-Am Building, an iconic skyscraper built above Grand Central Station.
Now known as the Met-Life Building (boo).
For a brief period in the 1960s, Pan-American Airways operated helicopter flights between the roof of the building and Kennedy Airport.
Super-Cool, but highly controversial.
Due to safety concerns, the helicopter flights were discontinued in February 1968, making Clint Eastwood one of the few people who actually used the service.
Scenes were filmed inside the helicopter, on the 60th floor landing strip, and in the Pan-Am lounge (where the bad guys ambush Clint).
Helicopter service was briefly resumed in February 1977, but a crash two months later beheaded five passengers, which brought a premature end to the experiment.
Still cool.

‘Coogan’s Bluff’ was the second film Eastwood made after his return from Europe (The first was ‘Hang ‘em High’).
‘Coogan’s Bluff’ was the first Eastwood film directed by Don Siegel.
It is almost a prequel to the Dirty Harry movies that he and Eastwood would make together beginning in 1971.
Clint is an Arizona deputy sent to New York to escort a criminal back for trial.
His attitude toward the criminal justice system is identical to Harry Callahan’s.

Mark D. BurghReviewed in the United States on July 5, 2015
4.0 out of 5 stars
He's Only Got Three Fours in His Hand
Verified purchase
Don Siegel just shoots the film. Nothing fancy, nothing insightful, nothing of artistic merit. The camera devours the necessary shots, and the story chugs on of its own volition. A template for the 1970's TV series McCloud, this film presages the coming of the original terminator, Dirty Harry, a few years late. Of course, Clint kills no one in the film, although he does attend a wild party (wish I'd'a been there) searching through the wilderness of 1960's NTYC searching for someone who did something bad in Arizona. He breaks rules, uses women, beats up thugs, wears a cowboy hat, makes Lee J. Cobb upset, and rides off in a helicopter in the end. Compared to moderns films, such as say, John Wick, this film is tame, a tad boring, and the deficiencies of Siegal's direction come off rather poorly in comparison. Now more an historical document, the joys are seeing a vanished New York and a younger Clint.
13 people found this helpful

rbmusicman/and/movie-fan'Reviewed in the United States on December 23, 2015
4.0 out of 5 stars
'I'M FROM 'ARIZONA'
Verified purchase
Arizona based 'Deputy Sheriff 'Walter Coogan' (Clint Eastwood) a smooth talking cop with an eye for a pretty lady is
assigned the task of collecting a prisoner from New York, a murderer.
Expecting a quick turnaround he finds that he'll have to wait around for a day or two, the prisoner 'Jimmy Ringerman'
(Don Stroud) is currently hospitalised.
It also seems according to the N.Y precinct Lieutenant 'McElroy' (Lee J Cobb) that there will be a list of procedures to
follow to extradite the prisoner into 'Coogan's' custody.
'McElroy' and 'Coogan's' paths will cross quite frequently along the way.
With time on his hands 'Coogan' makes a play for 'Julie Roth' (Susan Clark) who he meets in the precinct, she works in
probation department.
'Coogan' isn't one for hanging around, he illegally takes 'Ringerman' out of the hospital making out he had orders from
the local authority to do so, his plans are to fly back to Arizona with is prisoner as soon as he can, however, 'Ringerman'
is sprung at the airport, 'Coogan' overpowered by the murderer's friends.
Though ordered back to Arizona, 'Coogan' is going nowhere unless he as his prisoner in tow, 'McElory' insists that the
Arizona cop leaves the recapture to his department,.
In a strange town with great danger to himself 'Coogan' sets about the task, unofficially of course, to recapture 'Ringerman'
himself.
Perhaps a little dated, however it is 'Clint Eastwood' with his usual laid-back style and a collection of one-liners and his on-
screen talent for getting into a scrap or two, this is an enjoyable offering, a must for 'Eastwood' fans.
An 'okay' Blu-ray upgrade.
One person found this helpful

Brett L.Reviewed in the United States on February 15, 2018
3.0 out of 5 stars
Journeyman effort
Verified purchase
I remember liking this movie a lot more when I used to watch it on TV. Clint's character is kind of a jerk, really, but Don Stroud - sorry I love that actor - makes a great bad guy and the New York scenery from the 60's is great, back before American cities all became homogenized with the same stores, places to eat, and feel. A decent enough movie, but not like Madigan.
3 people found this helpful

DTLReviewed in the United States on October 14, 2011
3.0 out of 5 stars
No Dirty Harry without Coogan
Verified purchase
It's a good film by Don Siegel. You can see the outline of Dirty Harry taking shape in Coogan. In this case Eastwood plays a Sheriff sent to extradite a prisoner and finds a new frontier in NYC. They must have also decided that Coogan belongs in the city as a tough cop who knows his ground rather than the country as a top notch law official. There was also a temptation to drift into satire or romance and consume time but in turn so you changed the pace of the story and drifted away it. Eastwood does a decent job but with the exception of Lee J. Cobb the cast's support is inconsistent. Dirty Harry is a better film. It would never have gotten made without Coogan's Bluff. After all how many times can a country boy like Coogan go wandering into the city? Nice introduction to Dirty Harry and the changes that Siegel made. Lots of DVDs stamped and plenty usually available at a cheap price.
4 people found this helpful

Movies Are CinemaReviewed in the United States on January 14, 2020
3.0 out of 5 stars
Predecessor to Dirty Harry Films...A Bit of A Warm Up!
Verified purchase
Wanted to add this flick to my Clint Eastwood video collection. Not the best Eastwood film, but tolerable and some parts enjoyable. You can see the genesis of the Dirty Harry films that were to come.

316Reviewed in the United States on October 30, 2018
4.0 out of 5 stars
Cint V. hippies
Verified purchase
Same review as City Heat - not so great as a movie but if you are an Eastwood fan and want to see him in action against a bunch of dirty hippies it's good fun. Sad thing is things seem worse now than they did in the sixties.
One person found this helpful

L. CabosReviewed in the United States on December 2, 2008
5.0 out of 5 stars
Clint and Don
Verified purchase
The first of many collaborations between Clint Eastwood and Don Siegel, this, Eastwood's second film after the Dollars trilogy, has him as an Arizona Deputy Sheriff sent to NYC to bring back a wanted criminal. The fish out of water scenario as Coogan (dressed in stetson and cowboy boots) confronts the pecularities of the Big Apple. Susan Clark as the romantic interest, Lee J. Cobb as Lt McElroy, Don Stroud as Ringerman (the wanted criminal), Tisha Sterling (daughter of Robert Sterling) as his drugged out girlfriend. Look out for David Doyle (Bosley on Charlie's Angels) and in the "Pigeon Foot Orange Peel" long time Eastwood friend actor Albert Popwell (bank robber in DIRTY HARRY, pimp with Draino in MAGNUM FORCE, Big Ed Mustafha in THE ENFORCER and Callahan's buddy Horace in SUDDEN IMPACT). Nice score by Lalo Schifrin.
2 people found this helpful
See all reviews
Back to top
Get to Know Us
Make Money with Us
Amazon Payment Products
Let Us Help You
EnglishChoose a language for shopping. United StatesChoose a country/region for shopping.
© 1996-2022, Amazon.com, Inc. or its affiliates