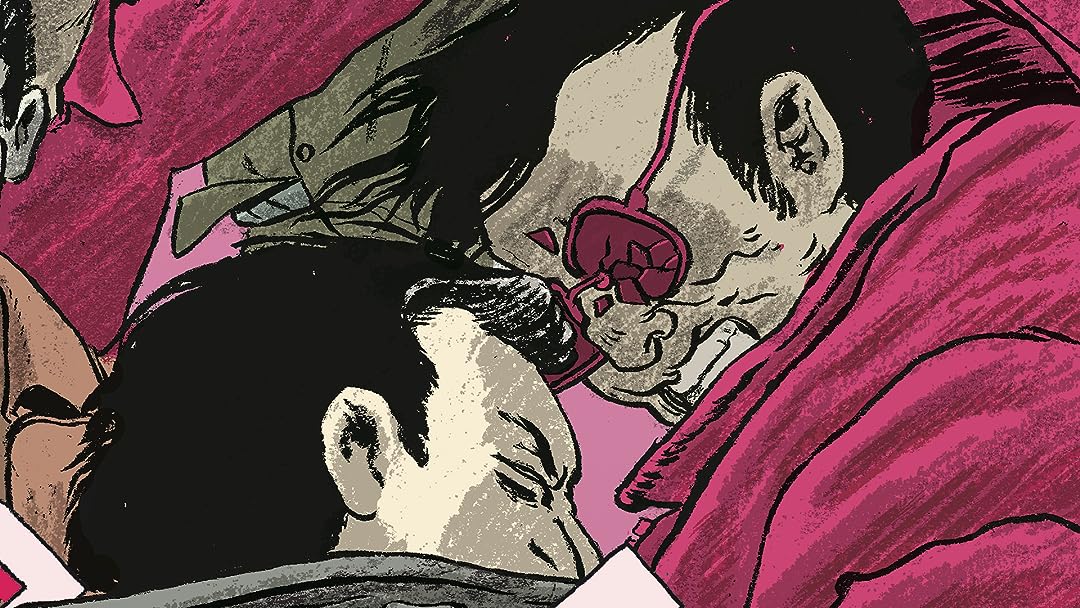 (50)
7.21 h 40 min200013+
Hirotani, acting boss of the Ohara gang, uses his friendship with Detective Kuno to usurp a staged land deal arranged between a rival yakuza gang and local politicians. Kuno is torn by his childhood allegiance to the kingpin and the pressure from his superiors to keep the city streets safe.

joel wingReviewed in the United States on February 8, 2020
5.0 out of 5 stars
Another classic by Fukasaku on how the Yakuza were a product of a corrupt Japanese society
Verified purchase
Cops Vs Thugs was another Yakuza (gangster) masterpiece by director Kinji Fukasaku. It was released in 1975 after his classic series Battles Without Honor And Humanity came out. Cops vs Thugs was filmed in the exact same type of realistic style and featured Bunta Sugawara as his lead once more along with several other actors from Battles.

The story takes place in Kurashimi City in 1963 where two factions, the Ohara and the Kawade gangs, are battling it out for control. Things begin in a dramatic fashion as the Ohara raid a new club opened up by the Kawade leading to a bloody fight. Sugawara plays Inspector Kuno a corrupt cop with connections to the Ohara clan and tries to help them in their rivalry with the Kawade.

The film emphasizes how corrupt Japanese society was. It’s not just the Yakuza and police who are in bed together, but so were various businessmen and politicians. They were all involved in a deep web of blackmail, bribery and other illegal acts. As one policeman says during a drunken party with both Kuno and Ohara’s men, cops and Yakuza are all the outcasts of society who couldn’t get good jobs.

Like Fukasaku’s other films this one does a lot to debunk the myth of the Yakuza which had been promoted for decades in Japanese cinema. Before Yakuza were portrayed as chivalrous heroes who followed a strict code of honor and carried short swords like samurai. Kinji showed that the gangsters were the product of a larger problem with graft within Japanese society, and would lie, cheat, steal, beat, kidnap, murder, etc. people left and right because they were criminals and usually had the protection of the police, politicians and businessmen.

If you’ve ever seen any of Kinji Fukasaku’s other films or even if this is your first try you’ll be thoroughly entertained. He created some of the best Yakuza cinema to ever emerge out of Japan.
C

telecaster62Reviewed in the United States on April 25, 2008
5.0 out of 5 stars
What's a tough cop to do?
Verified purchase
In at least 6 movies by director Kinji Fukasaku, Bunta Sugawara played a yakuza thug. This time, he carries a badge but his character hasn't lost his distaste for double-dealing bosses and authority figures who are out to cover their own butts.

Detective Kuno is balanced between the law and pragmatism. Cops didn't enforce the law to the point of pushing gangsters over the edge. In return, the gangsters mostly stayed out of the public eye. Some of them even became friends with cops, sharing a mutual desire to keep-down trade unions and leftists. When that balance is upset, Kuno has to decide where his loyalties lie. In this gray world, cops aren't always good and gangsters are thoroughly bad.. although there's no reward for good men who drink from the cup of corruption.

"Cops Versus Thugs" has that trademark Fukasaku camera-work.. constantly moving, zooming, and putting you right in the middle of the action, changing loyalties and political maneuvering between cops and criminals.

Oh yeah, it was shot and takes place in the 1970's.. so dig that righteous polyester!
11 people found this helpful

Mike SmithReviewed in the United States on October 17, 2017
5.0 out of 5 stars
Nice mob film
Verified purchase
It's peppered with fights, gunplay, murders, and other things to get the blood pumping, but this is not some rampage-style action movie: most of the excitement comes in the form of fighting words. I would recommend because it has an upbeat counterpoint that starts at the theme and vivifies the whole movie, so that even when the second half gets a little slow, you're never having a bad time.

It's a story about crime, friendships, partnerships, it's got some good action, some big crimes-gone-awry, and the film makes you think a bit too.

Other small points: films a little long so be ready for that. No real romance subplots.
One person found this helpful

Amazon CustomerReviewed in the United States on November 16, 2017
5.0 out of 5 stars
Awesome. Totally awesome.
Verified purchase
If you liked the Yakuza Papers you’lllove this, and you don’t need to watch 6 of them. Fukusaku in his prime.
2 people found this helpful

michaelReviewed in the United States on May 16, 2018
5.0 out of 5 stars
Five Stars
Verified purchase
Good
One person found this helpful

Movieline OnlineReviewed in the United States on May 31, 2017
4.0 out of 5 stars
Chaotic violence amidst the blurred lines between law and order
Considering he shot 23 yakuza-action movies between the years 1972 and 1978, it's a wonder director Kinji Fukasaku could keep the characters, stunts and scripts from spilling over into each new production. In actuality, there's a good bit of recycling going on in Cops versus Thugs, with familiar actors from the Battles Without Honor and Humanity films (recently released as a box set by Arrow Video) shuffled into new roles and familiar scenarios given a fresh twist. Here, it's an unlikely friendship between Detective Kuno (Bunta Sugawara) and up-and-coming yakuza Kenji Hirotani (Hiroki Masukata) that sets the stage for an almost Shakespearean family tragedy.

The title, Cops versus Thugs is more than a bit of a misnomer as the script (by BWH&H screenwriter Kazuo Kasahara) is primarily focused on the blurred lines on both sides of the law. Det. Kuno and the cops at his local precinct aren't exactly on the take, but their method for keeping the peace involves making sure one gang has an edge over the other. In this case, the Ohara gang (led by Hirotani) is given a leg up on every bit of information in town, keeping the rival Kawade gang in a distant second place, despite some corrupt government officials trying to selfishly turn the tide.

And it's a land deal gone bad that instigates a full-on war. With violence spilling over in the streets, city officials call for an outside task force to take charge led by Lt. Kaida (Tatsuo Umemiya), whose by-the-book strategy doesn't gel with the local laissez-faire policy. The surprise raids put a strain on Kuno and Hirotani's tenuous friendship, culminating in a standoff in which only one of them will be left standing.

It takes nearly an hour for Cops versus Thugs to find the core of its story. Fukasaku's chaotic action scenes combined with an overabundance of cops, bosses and underlings makes it difficult to sort out exactly who is at the center of Kasahara's script, which a title card claims is based on actual events. But when the film finally settles on Kuno and Hirotani's yin-yang relationship, the drama begins to pay dividends.

While Cops versus Thugs offers up its share of typical action tropes - beatings, rumbles, rape and revenge, all shot with a rough 'n ready documentary style - its the ethical argument behind Kuno's style of law enforcement that puts meat on the script's bones. Sure, he drinks on the yakuza's tab, screws the yakuza's women and greases palms in their favor, but the result is a peaceful equilibrium in which everyone comes out ahead. Lt. Kaida's hardcore approach, strictly following the letter of the law, results in more arrests and more dead bodies. But just when you think the film will choose a side, another facet is revealed, leaving the audience with an ethical quandary all their own.

Arrow Video's hi-def transfer is another solid Toei import and includes a few extras that will certainly enhance your appreciation of the film, including a 10-minute "introduction" by Fukasaku biographer Sadao Yamane and an another video essay by film scholar Tom Mes. Both pieces cover the director's major cinematic achievements are the current films' place in his oeuvre. There's also a bit of archival behind-the-scenes footage and the original theatrical trailer. A DVD version of the feature is included as well as an insert booklet with new writing on the film.
2 people found this helpful
See all reviews
Back to top
Get to Know Us
Make Money with Us
Amazon Payment Products
Let Us Help You
EnglishChoose a language for shopping. United StatesChoose a country/region for shopping.
© 1996-2022, Amazon.com, Inc. or its affiliates