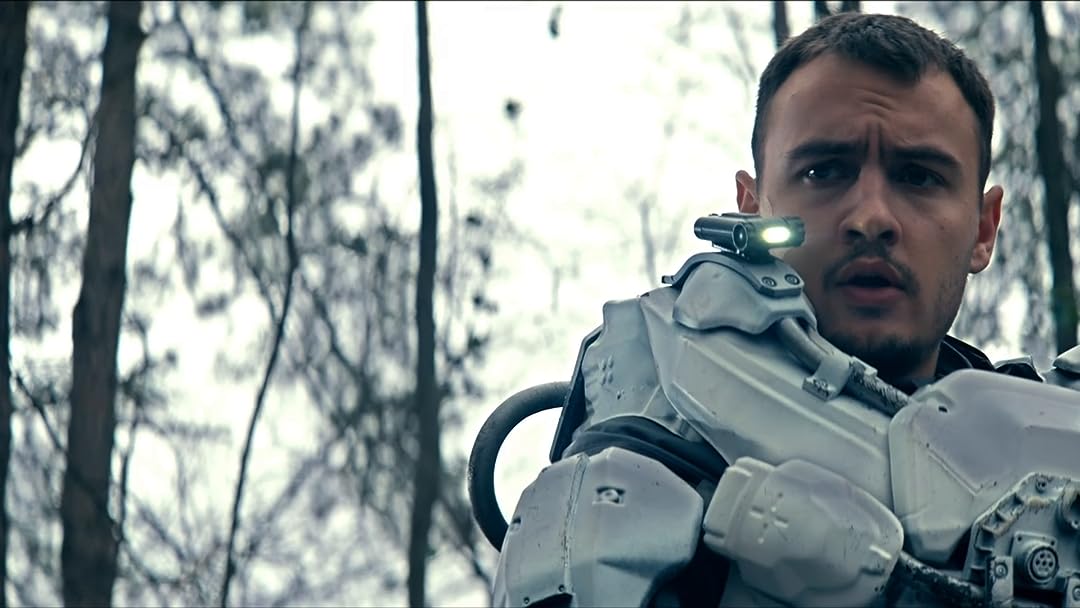 (2,785)2.51 h 28 min2021X-RayR
Bruce Willis and Frank Grillo star in the epic sci-fi adventure set in the year 2524. Retired General Ford (Willis) partners with General Eron Ryle (Grillo) and a team of elite soldiers in a race to stop an interstellar war before it's too late.

Mac McGillReviewed in the United States on March 15, 2021
1.0 out of 5 stars
Unwatchable
Verified purchase
The badness just hurts. Worst Grillo movie ever, not to mention Willis. There is just nothing redeeming about this movie. I knew I had made a mistake renting it within minutes. Willis spends the whole movie looking like some old lady who just lost a bet, barely saying anything. I especially love how 500 years in the future people are still driving pick up trucks from 2018. All the actors are bad, saying bad dialogue, in bad action sequences. Its not even bad in a good funny way, its just bad. Holy cow is it bad. Really bad. Dont rent this bad, bad movie.
55 people found this helpful
Report abuse

Amazon CustomerReviewed in the United States on March 13, 2021
2.0 out of 5 stars
Great Potential but Total Let Down
Verified purchase
This movie was too short and really felt like a B movie based on The Expanse. There was no character build up, acting was sub par, and the plot had so much potential but really fell flat. Any sci fi lover will hate this b/c of the potential to be so cool and being let down. For example, sending a general into battle with 5 or 6 companions makes no sense to me. If he honestly thought our entire specifies was at risk he would send a lot more than himself with 6 people, and they would likely be some form of special forces. Another amusing fact, acquiring a Q bomb was probably easier than getting a side arm. If these are the future nuclear weapons, I would think there would be a little more security than what this movie had in it (i dont even think there was a locked door and the base had like 20 people in it). The movie also never really explains the alien species or shows them outside of their human hosts (B movie could at least slap a mask on dog or something). Overall i like the ethics questions surrounding first contact going badly, i just wish this movie was made by someone with a thought process more advanced than what seems like a freshman in high school.
35 people found this helpful
Report abuse

UtopianThomasReviewed in the United States on March 12, 2021
2.0 out of 5 stars
If you have bad eye sight, like bad dialog, and don't like to think, this one is for you.
Verified purchase
I gave it 2 two stars for Bruce Willis. Not that he was good in it but because I like him in general. It feels like Bruce knew it was not going to be stellar and gave the appropriate amount of energy toward his role. It feels campy with actors using devices they don't have on them and pulling guns out of nonexistent holsters on their backside. The dialog is poor and feels awkward at times. The talky talky get old fast and most of the special effects feels 2nd rate.

Brandon Thomas Lee does try to make his character likable but with the limited one sentence dialog makes it to big of a challenge.

I feel like it was made for the SciFi channel. :)

ScottReviewed in the United States on March 23, 2021
1.0 out of 5 stars
This is shit.
Verified purchase
This was trash. Terrible acting. I’ve watched bad movies and enjoyed them, but this... I should have been paid to watch it. Then given my time back. Such an amazing concept. But instead of making a memorable movie, I was given a memorable pile of shit. I will always remember this as THE worst movie I have ever watched. And I know people exaggerate this type of thing, but I swear on my entire ancestry, this is the worst thing I have ever seen. I was so extremely excited about it, but I am utterly disappointed. So many plot holes. Terrible progression in the film. Several scenes are useless to the story and the ones that could have made a difference, fall... plummet way short of being able to explain or even hint on what is happening or how they should even be possible. I love Bruce Willis and was excited for this film. I am, however, regretful that I watched it. Please do not waste your time on this. The concept is great, but I feel as if the whole thing was made on one take. The armor they wear is half of the time falling off or hanging off to the side as it’s not even secured to them.. I could go on for pages of complaints. I’m just sad it was not what I was expecting... by a long shot. Good luck if you watch it.
21 people found this helpful
Report abuse

J. FreemanReviewed in the United States on April 3, 2021
1.0 out of 5 stars
Edited to an unwatchable plotless mess
Verified purchase
Acting is ok. CGI is ok. Plot is THERE but makes no sense because of bad editing. The story jumps from an interstellar encounter to the same ship arriving back on earth in 24 minutes (there is a “time since first contact counter”). Then a plan comes together and a team is assembled and a plot device is thrown in (none of which make sense but again, bad sci-fi) by minute 74 after first contact. Then jumps to an interstellar planet under alien siege for hours and hours with a whole “battalion of 300 people” wiped out.

It just feels like the editors cut this from something meh into drivel and people who have no idea about what is realistic or even logical shit this out while working from home and not caring. Not blaming actors or writers because no one could have written or acted in something this bad and not made changes. Tons of things must have been cut that would have made this movie at least make some kind of sense.

Tina L.Reviewed in the United States on March 13, 2021
1.0 out of 5 stars
A very bad B movie
Verified purchase
The preview made it look better than it was. I gave up on it approx. half way through. Even with Bruce Willis and Frank Grillo still not good. Certainly not worth 7 bucks. Maybe 3 if you are really really bored. Otherwise save your money for another movie.
17 people found this helpful
Report abuse

Rocko3Reviewed in the United States on March 16, 2021
3.0 out of 5 stars
...this is an incomplete film???
Verified purchase
....first off, there are a lot of people blaming the actors for this movie being lame. Not fair at all. Actually the acting was, although a little stiff at times, the best thing about this movie. The movie was probably edited into extinction because of time restrictions...I suppose. They could have just foreshortened the bang bang parts and wiz-bang effects, which were mostly CGI animated and made this a better movie. They didn't trust the actors I guess..... I mainly watched this movie because of BW... unfortunately he appears seldom, and seems disinterested when he does. Anyway, the only way I can recommend this film is if they knock the price down, or re-edit it.
15 people found this helpful
Report abuse

C&SReviewed in the United States on April 12, 2021
1.0 out of 5 stars
this is what millenials think the military is like
Verified purchase
I've seen anime shows better than this. This needs to go straight to rifftrax. Alien first contact... what's the containment protocol? Walk them into a room with armed human soldiers and doctors. When this idiocy goes poorly, what do we do? We call in a couple vets from an old conflict, slap plastic armor on them, and fire them into space with no helmets. Yes, you read that right. These actors must have demanded that their faces weren't obscured, so their helmets are literally plastic things that go around the neck and up the back of the head, but no face shield or respirators. Combat? Why, naturally, when an elite team lands they huddle up, don't secure the perimeter, don't even look around. The point man stealthily does a 360 and sweeps his entire team with his weapon. The elites are rescued by a woman with yellow hair that looks like an antifa mugshot. Oh, and she walks around with what looks like a sci-fi Barret .50 that's taller than she is. In fact, everyone under 30 in this show has a snarky comment and a close up eye-rolling scene that just takes you out of the entire movie. The premise is bad. The dialog is horrific. The combat is like watching children play "army". The aliens, naturally, are built like us and the same size, have the same expressions and move like us... shocker... except they have cool assassin's creed outfits. I have no idea what made Bruce Willis agree to participate in this mess. I'm not exaggerating, it is one of the worst sci-fi I have scene in a long time. I watch B movies on purpose to make fun of them... this one is so bad, you almost can't. And it takes itself seriously. Whoever greenlighted this production needs to retire immediately. Oh, and the "q-bomb" had to be "calmed down" when they landed. That should tell you everything you need to know right there. They should put the girl with yellow braids and the 20-something calming down a nuke in the trailer so rational people know not to waste $6 frigging dollars on this. Holy cow, it was SO bad.
4 people found this helpful
Report abuse
See all reviews
Back to top
Get to Know Us
Make Money with Us
Amazon Payment Products
Let Us Help You
EnglishChoose a language for shopping. United StatesChoose a country/region for shopping.
© 1996-2021, Amazon.com, Inc. or its affiliates