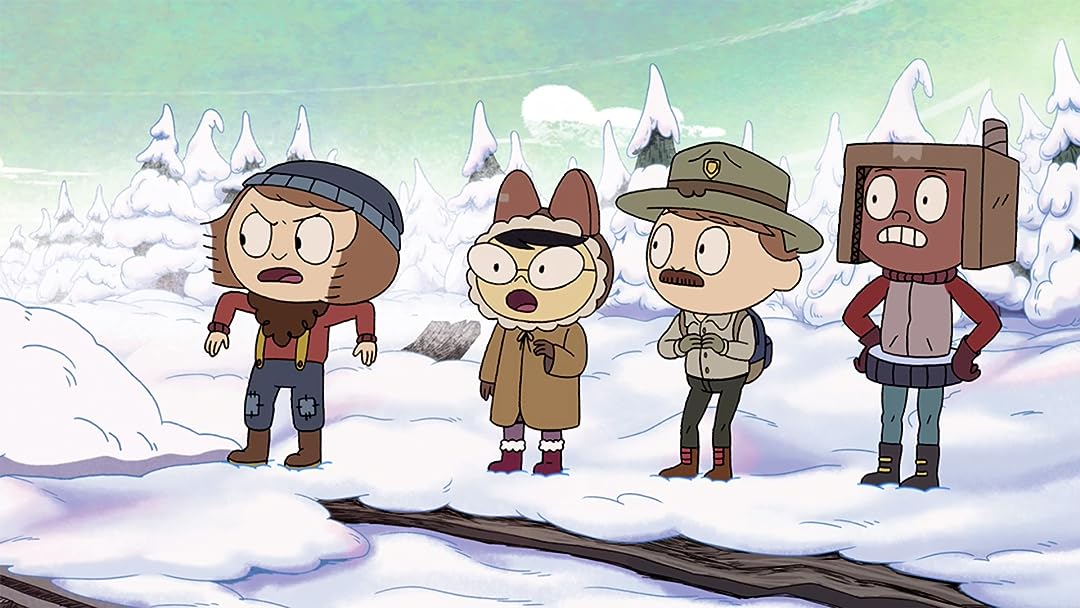 (8)
7.12019X-Ray7+
Everyone is jolly as ever at the Auburn Hollow Christmas Festival of Cheer. Wren, Reynold, Everett and Lucy are thrilled to finally enjoy a holiday without having to worry about saving the universe, but trouble looms when the monster hunter Silvia Razer arrives looking for paranormal activity. With their friends in danger, the kids must use their magic costumes once again and face this new foe.

Bryan VariellReviewed in the United States on November 24, 2019
5.0 out of 5 stars
Grublins on Ice
Alright since this is the first review here I'll say this. Like the rest of the series me and my little ones enjoyed it. The story itself continues form the end of season 2 and like the show does its own thing. The episode itself is a nod to the original games expansion Grublins on Ice. Also its the longest of the episodes being single 35 min episode compared to the average 10min spilt in 2 episodes. The story itself I found good very little has been rehashed while adding new elements such as a the series first antagonist. if I have any complaints its that one it was released before Thanksgiving and little to no promos where given. As didn't know of the episode until the day it was released. But yeah if worth watching if you liked the show its worth a watch. And I believe it to be satisfying end to the show.
7 people found this helpful

Christian IriarteReviewed in the United States on December 1, 2019
5.0 out of 5 stars
Very Entertaining and Enjoyable
I was looking forward to this when I heard of it as I've really grown to like the series. I haven't played the games, but the series is quite good, and this special is no exception. It continues the story from where the first season left off, and it is cool to see what the characters are up to after defeating Bob. Also, the Christmas setting is a nice change of pace from the fall scenery of the first season.

Overall, this is a very entertaining special with the same level of quality present in the first season. I love that it managed to create it's own story without resorting to any of the tired Christmas special cliches like having the characters help out Santa Claus for example. It's cool to see how the kids, Norm, Oona, and the Grubins are all a team now, and how all the character development that we saw in Season 1 continues here. I wont spoil anything in this review, but it is cool to see how the characters are starting to trust each other more, and there is a nice moment in the climax that showcases how the Grubins have truly changed for the better. There is some cool action as always, but most of it is towards the end here, and there isn't too much of it throughout the special. However, there is enough in this to keep you interested, and the story is entertaining with all of the character interactions and humor. I am also glad the show continues to not devolve into sophomoric levels with awful toilet humor.

Any nitpicks I would say are minor, and don't take away from the overall special. The new antagonist is not that interesting, and she can get annoying in some scenes, but overall, she doesn't bring it down at all. It's also sad we don't get to see the kids interact with their parents in this, but I know you can't squeeze in every character even in a special that's over 30 minutes. Norm also takes somewhat of a backseat, and doesn't appear that much in the middle of the story. However, the positives easily outweigh any nitpicks, and if you like the show then this is certainly worth watching.

I believe this to be a well done special, and even though it's not necessarily among my favorite Christmas cartoons of all time, I still think it's one of the better Christmas cartoons I've seen in recent years, and possibly one of the best I've seen since Phineas and Ferb's Christmas Vacation. I really hope Amazon chooses to continue Costume Quest, and that it doesn't end up dying after only one or two seasons. The series is very well done, and I would love to see more of it.

JonsauceReviewed in the United States on December 25, 2019
5.0 out of 5 stars
Enjoyable Holiday Themed Costume Quest
I am a fan of the games and I enjoyed the two part seasons released earlier in 2019. I was a little surprised to see a Christmas themed Costume Quest since all of the previous works have been centered around Halloween but this 35 minute episode worked great. It's probably not a great intro to the series since it carries over the characters and their backstory from the first two seasons and assumes you understand the backstory, but it was a very enjoyable watch for someone who has consumed everything else Costume Quest.
4 people found this helpful

Linden SeamanReviewed in the United States on April 24, 2021
4.0 out of 5 stars
Enjoyable show, but is it really for an audience of children?
I really enjoyed the two main seasons and the additional Christmas episode of Costume Quest. I did feel that the first season didn't seem exactly geared towards kids but I'm pretty sure that's where I found this listed when I was looking for a new animated series to binge. I did appreciate the development of a storyline as the series went along. I didn't feel there was much of one towards the beginning but that changed. Also, I just questioned sometimes why there is so much fighting and violence but also that's just what some people want to see. I feel like there was a lot of room for character development to continue and also I'd like to see more of the escapades that the crew gets up to. Hoping maybe this will have another season come out although I understand the original plot line is over as far as I can see unless we jump 100 years into the future. I enjoyed the grubbins, Norm, and the different ways the kids interacted with their parents. I kind of wish we could learn more about Norm. The Christmas episode was a cute follow up of his story with Oona. FIngers crossed for more of this show

A.S.Reviewed in the United States on April 8, 2020
4.0 out of 5 stars
Comfy and Eventful Holiday Special
I wasn't expecting much from this episode since it was a holiday special, but it was surprisingly eventful. It picks up after the events of the season finale, a new villain is introduced, the new status quo is explored, etc. It has a delightful winter atmosphere that's as successful as the Halloween one. I do wish it addressed some aspects from the finale, like Lucy's mom knowing the truth and whether the kids are keeping the events secret besides just Dudley.

Still, I recommend it overall if you enjoyed the series and want a holiday special to watch.
One person found this helpful

JAMES B MCDANIELReviewed in the United States on February 8, 2021
5.0 out of 5 stars
Entertaining and fun!
Me and my 6 year old son watched this all day long and it was great for both of us! He wants to add that he likes Bob Dickerson in his monster form.
One person found this helpful

The Illegal CoconutReviewed in the United States on November 4, 2020
5.0 out of 5 stars
Great Show
Very entertaining and an awesome find.
One person found this helpful

AlonsoReviewed in the United States on July 26, 2021
5.0 out of 5 stars
A Serie so fresh / Una serie muy fresca
The plot of the story, the narration and the style of drawing seemed very good to me. It is a fresh series to see with the little ones in the house or even to be able to enjoy it in an adult life. :))

The plot of the story, the narration and the style of drawing seemed very good to me. It is a fresh series to see with the little ones in the house or even to be able to enjoy it in an adult life. :))
See all reviews
Back to top
Get to Know Us
Make Money with Us
Amazon Payment Products
Let Us Help You
EnglishChoose a language for shopping. United StatesChoose a country/region for shopping.
© 1996-2022, Amazon.com, Inc. or its affiliates