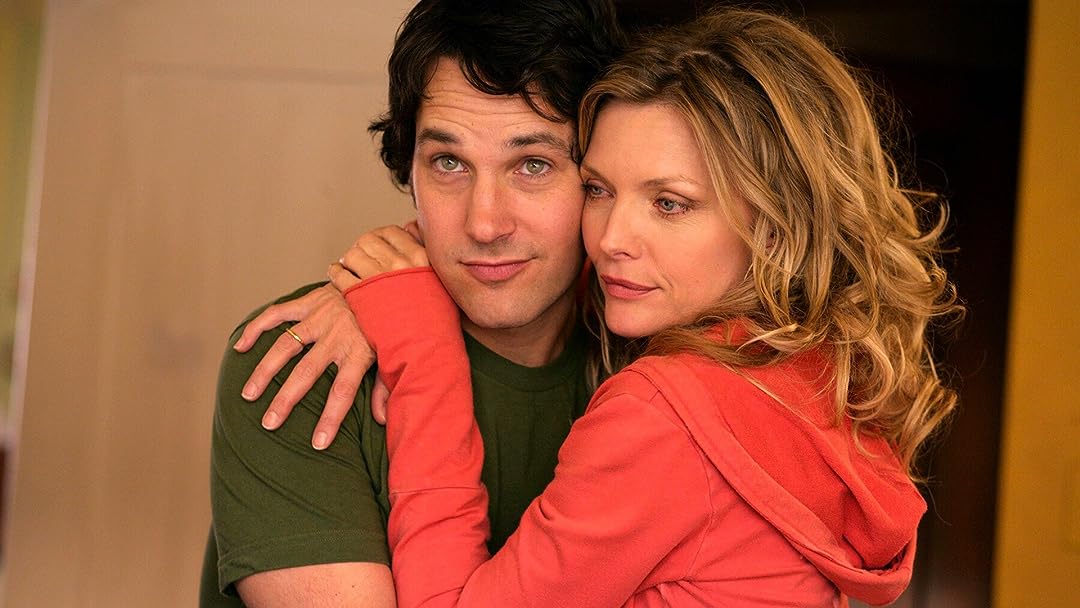 I Could Never Be Your Woman

Baba GanushReviewed in the United States on September 27, 2021
4.0 out of 5 stars
Your Averrage Rom-Com Fare With Pretty People
Verified purchase
Although this film was not "Oscar worthy", it was totally watchable. Because I'm a fanboy of Michele Pfeiffer(that white gold) and I think Paul Rudd is an amazing talent, I bit the bullet and watched it all the way to the end. The script seemed like it was written for two totally different actors but those two thespians pulled it off.

It was interesting to see Soarse Ronin's debut. She was a talented young actress doing the Reese Witherspoon. If you're in the mood for light fare and good acting, this would not be a bad choice. Give it a try. I think you'll like it.

KEITHReviewed in the United States on January 23, 2022
4.0 out of 5 stars
A Kaleidescope of Glib Impressions
Verified purchase
"I Could Never Be Your Woman" is a movie filled with a wonderful feel good vibe. There are some rough montages, of plastic surgery patients during the opening credits. There is a very specific target that this movie aims at. Rosie (played by Michelle Pfeiffer) is a scriptwriter for the television comedy series 'You Go Girl'. Jon Lovitz is Nathan, Rosie's ex. Nathan has a proclivity to chat with Rosie even though he is taking a board game away-trying to sneak it out with him, from the house. There are impressions made cliche, by some slick looks, and in spring color props. One thing that is standout is the natural kindness of all of Amy Heckerling's colorful characters. With this proposal I can't help but think of the dispositions of literary artists( the effulgent cast and the quality of the excellent Clueless are also proponents). Michelle Pfeiffer as Rosie, this is a methodical placement. A single parent in a creative profession. This agent as Rosie is the essence of myth-making. A semi-worldly, posh, single mother-none of the actual hardships of acting would ever be glimpsed.
On the set of ' You Go Girl', the actors, playing their roles, speak the brogue or the slang of teenagers. This speech has been voiced by Rosie's daughter, Izzy, and Rosie has worked it into the script. The actors, Brianna (played by Stacey Dash) and Sean (played by O-T Fagbenle) are complementary to each other. These sketches are not set plays to deliver a joke, a sequence of actions to resolve bits of dry drama into laughter. As a viewer one can also trust that the film will give us authenticating details; a crew manager instructs the cast to "drop off your phones" when the scene is cut to stop.
Despite this highly fictionalized world, the characters invite intense interest. Saoirse Ronan, playing Izzy, daughter to Rosie, has a physical range which is extraordinary in relaying various attitudes. One moment she can be relaxed, involved in daydream scenarios with her mother, employing doll dramas(or comedies) together, or Izzy can narrate a story about a tampon that is mildly crass. In Heckerling's fantasy driven reality, Izzy becomes fiendishly mature when it is time to connect two souls. Paul Rudd, as Adam, has scenes when the film becomes a cornball feel good fantasy(not many, and they're very brief). Adam has a galvanizing quality, an impish good humor that is bound up with an ambiguous courtesy. This is delightfully expressed in mischievous playmaking. Kindness is never mentioned in the movie. To approach this issue close up would be to negate the meditation which must exist to let considerations materialize like apparitions. Paul Rudd and Michelle Pfeiffer are the products of an exposition. Adam made me feel proud to be a male-this was a denoument, invoked privately, when I was trying to explain my love for the film. Michelle Pfeiffer innovates social exchanges, when listening, when watching, when addressing, every expression is a novel embellishment.
Practical points in the plot are gaudy-saturated in clumsiness and rushed off the stage. As for instance, when Rosie discovers that a certain photo is fake. The problem with fictional motives is that in a slice of life world invested in personages-this sugary pudding is reflected in real life which is ugly-appearances can jar resentment like the friendly wood dwelling troll in some classic fables. Why is plastic surgery so graphically displayed? Why does Adam, a lover of life, have to be crude?(for most of the movie, he really isn't). These are
statements. A grand plan, an over-arching theme, would have fused the sectional issues together. In a more sensational revelation these rendered canvasses would be bound up by a popular mystique.

A. Z.Reviewed in the United States on September 24, 2021
3.0 out of 5 stars
Some fun performances.... but
Verified purchase
I enjoyed Paul Rudd and Michelle Pfeiffer's performances, even jon Lovitz adds some fun. A little silly and overplayed for my taste. I think it would have worked much better as a teen rom com. Some of the overtop plot lines would have worked better for a younger audience. Paul and Michelle had a good chemistry that carried it for me. Some of it feels dated, and Heckerling uses the daughter as her muse to interject her personal opinions throughout which feels very out of place and distracting.
2 people found this helpful

Glama PussReviewed in the United States on September 19, 2021
3.0 out of 5 stars
Fluffy movie that actually made me...
Verified purchase
laugh quite a few times. Loved Tracey Ullmann was great as were Paul Rudd and ofc Pfeiffer. Love it when she as Rosie said to the wanna-be actor putting down many actresses that an actor "Sun Yi'd her out of the marriage''. Music was great. Figuring for a yr to make this movie, Michelle Pfeiffer was actually 48 in this.
She is so gorgeous still and I dont think she has any procedures besides a teenager nose job - didnt even look Botoxed (so dangerous, do yr research on that!) Fasting and dry fasting tho to stay thin and keep the skin firm, that I hope she is doing. Recommend for a lazy Sunday afternoon.
One person found this helpful

JudyReviewed in the United States on November 26, 2021
1.0 out of 5 stars
Now I understand why it straight to video
Verified purchase
There was so much going on and yet so little. I like Michelle Pfeiffer and Paul Rudd. But it was hard to by that she was 40 and that he was 29. I suppose this was supposed to convey just be yourself instead of making yourself into something that you think would make you more attractive to men but gosh if it wasn't annoying getting there. I watched some and fast forwarded some. That should tell you something.
One person found this helpful

A&RReviewed in the United States on September 4, 2021
1.0 out of 5 stars
Did not work for us despite the fabulous Michelle Pfeiffer
Verified purchase
Turned this off after 5 minutes due to an opening scene with Jon Lovitz and Michelle Pfeiffer that did not seem to work well, so we can't say if it improves later. There's simply too much content these days to spend too much time on something that doesn't grab you instantly. Not sure if that is a good or bad thing for the movie industry or our attention spans, but it is what it is.
3 people found this helpful

Denise H.Reviewed in the United States on October 30, 2021
1.0 out of 5 stars
Terrible movie
Verified purchase
I didn't make it more than 30 minutes into the movie I was so offended with the lines the daughter was given. This is a real person. A young girl around the age of 10-12. And this is the part that her parents and Hollywood are fine with her playing. It was sad and unnecessary.
2 people found this helpful
See all reviews
Back to top
Get to Know Us
Make Money with Us
Amazon Payment Products
Let Us Help You
EnglishChoose a language for shopping. United StatesChoose a country/region for shopping.
© 1996-2022, Amazon.com, Inc. or its affiliates