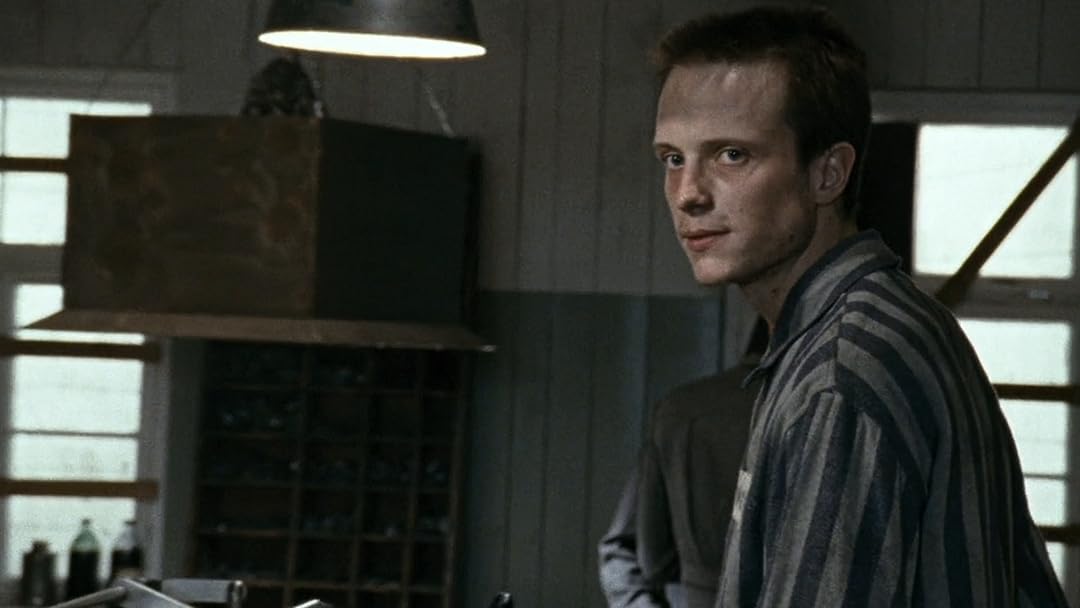 (512)
7.61 h 38 min2008X-RayR
Winner of the Academy Award® for Best Foreign Language Film, The Counterfeiters tells the true story of Salomon Sorowitsch (Karl Markovics), a swindler who made a name for himself as Berlin's "King of the Counterfeiters." However, his life of women and easy money is cut short when he's arrested and placed in a Nazi concentration camp. With the German army on the verge of bankruptcy, Sorowitsch ..

Hee Chul KwonReviewed in the United States on May 11, 2016
5.0 out of 5 stars
ONE OF THE BEST GERMAN MOVIE I'VE SEEN
Verified purchase
This is one of the best German movie I have ever seen. Not mentioning Rainer Werner Fassbinder cause he is far from comparable. He is like a god of making movie so let's put him apart from being compared.

This movie is about this guy who is famous for forging fake money, passport, and checks of all kind.
The is a Jew born in Russia and during the Nazi period, the Nazi heppens to arrest him and put him in a camp for jews.
But the place where he was in was far from other jews. It was luxurious and full of plenty of stuff.
Although some of the nazi's treat them bad, the top officer who happens to be the one who arrested him treated him decently.

There he forged different kinds of moneys, checks to back up nazi for war budget. The German's are having hard time to having war and they did need money.

The movie was extremely well made.
The acting of Tim Breyvogei and all the others are so well done and even after the show, I still remembered their faces clearly. They were so lovable.
The young guy who end of being sick and died by nazi who shot him to kill, the guy who's wife is in Auschwitz, I think it was, wanted to conqure them and rull over the camp, and others.

And I shoul never forget about the beautiful exotic music by Hugo Díaz along with harmonica tunes it was just so great to hear.
Try this.

If you think this is just another movie like <Schendler's List>, you are totally wrong. This movie is far from it and in some way it is way better. The movie never pushed us to feel what they felt like Shendler's List did. You know Spielberg.

The director already made a lot of good movies by the time he made this one and you can feel it by watching this film.

There seems no weakness in this movie at all to me and that's why at the beginning this is one of the best German movie I've seen so far.

RescuepetsruleReviewed in the United States on January 18, 2021
5.0 out of 5 stars
They dumped the duds in a deep lake...
Verified purchase
Before they fled the Nazis loaded trucks with the Pound notes and took them to a deep lake, dumping the evidence, BUT some locals saw what was going on. Later, divers recovered some of the money. As usual, just as they were too late perfecting the V2 Rockets and the first Jet fighter planes, they were too late ruining Britain's and the USA's economy too. Good movie.
One person found this helpful

Carol StormReviewed in the United States on July 14, 2015
5.0 out of 5 stars
Imagine Jimmy Cagney In The Toughest Holocaust Movie Ever Made!
Verified purchase
Imagine THE DIARY OF ANN FRANK if it had been filmed as a classic crime film starring Jimmy Cagney. This is a movie that turns all the well-meaning Holocaust clichés on their head. The cynical, amoral anti-hero Solly is so completely selfish and so completely focused on his own survival that his own private journey through hell comes across as classic tough-guy drama rather than moral uplift. Yet at the end the brilliant forger discovers his conscience and finds a way to outwit the Nazis after all. A Holocaust movie for everyone who hated SCHINDLER'S LIST but loved THE MALTESE FALCON and THE PUBLIC ENEMY.
7 people found this helpful

mecReviewed in the United States on March 8, 2016
5.0 out of 5 stars
An unforgettable story of moral ambiguity in the Nazi concentration camps.
Verified purchase
Memorable as the true story of Salomon Sorowitsch (Karl Markovics) shows how a morally ambiguous character survives the Nazi concentration camps where personal loyalty is his guiding principle and not the larger resistance against the evils of Nazi extermination of the Jews. The movie shows a disturbing and human face to the victims as well as administrators in the concentration camps. Well deserving of the Academy Award.
3 people found this helpful

skywatcherReviewed in the United States on September 22, 2008
5.0 out of 5 stars
Untold story-great characters,loved the "artifacts" extras
Verified purchase
PQ/AQ 4/5.I am 1/2 German and unfortunately heard about the time period in which my mom grew up in, when she was a little girl. Many German people risked their lives helping Jewish people who were unjustly persecuted. This film showed yet another side of this inhuman time period, and it was an engaging portrayal of the economic plot happening behind the scenes of the bombs and atrocities. With humor and a contant edge of fear, this film tells an incredible story of what happens when a group of people is asked to compromise all ethics to survive. The "artifacts" extras are very interesting and the film is not to be missed for its relevance. Thoroughly enjoyed-highly recommended.
2 people found this helpful

Sue E. CrossReviewed in the United States on November 19, 2009
5.0 out of 5 stars
Ugly Anti-Hero; Death Camp; Holocaust -- this film has it all!
Verified purchase
I first saw this film in a theatre and then knew I had to have it in my personal collection. While there are necessary moments of high seriousness and tragedy, basically we get to see a deeply flawed "hero" turn his criminal talents into a unifying, rallying effort to defeat the enemy and find his own kind of nobility at the same time. So what if he isn't a typical marquee idol, classically handsome and clearly wearing the white hat? He finds his own salvation and that of others (if not their own lives) by, first, trying to stay alive by cooperating with the enemy and, then -- growing more deeply conscious of his own humanity and that of others as well as the evil of his captors -- trying to take seemingly small actions that could not only save their lives but contribute to the larger issues of winning wars and defeating the enemies of mankind.
4 people found this helpful

Malcolm WebsterReviewed in the United States on November 15, 2012
4.0 out of 5 stars
An interesting true story of fraud.
Verified purchase
The Counterfeiters is a co Austrian/German production that is based from a true story starting in Berlin in the late 1930's where a Jewish man who loved the high life and betting in Casinos. In order to maintain his lifestyle, he started producing his own counterfeit German Reich Marks but he eventually got caught and went to Jail. When World War 2 broke out, he was transferred to a Concentration camp and he was approached by the same Berlin Detective that arrested him and was now a Major in the German Army. The Major wanted him to produce Counterfeit British Pounds and American Dollars as a way to help Germany win the War. The Counterfeiters is a very interesting movie and it is worth watching.
4 people found this helpful

E. D. DeussReviewed in the United States on October 7, 2008
5.0 out of 5 stars
Great Germanic Opus
Verified purchase
The Counterfeiters is one very good film. It's even better when one considers it is based on a true event within Nazi Germany! Jewish counterfeiters and forgers who ran afoul of the law are in a prison camp and are recruited by the Third Reich to counterfeit American and British banknotes. How this is accomplished and why it ultimately fails is carried out in detail in this film.

The film is in German, with fairly large English sub-titles. Among the extras is a queston-and-answer period with the director, who speaks near-perfect English. There are few other extras. Beautifully photographed, it was the best foreign-language Oscar winner for 2007. Very highly recommended!
See all reviews
Back to top
Get to Know Us
Make Money with Us
Amazon Payment Products
Let Us Help You
EnglishChoose a language for shopping. United StatesChoose a country/region for shopping.
© 1996-2022, Amazon.com, Inc. or its affiliates