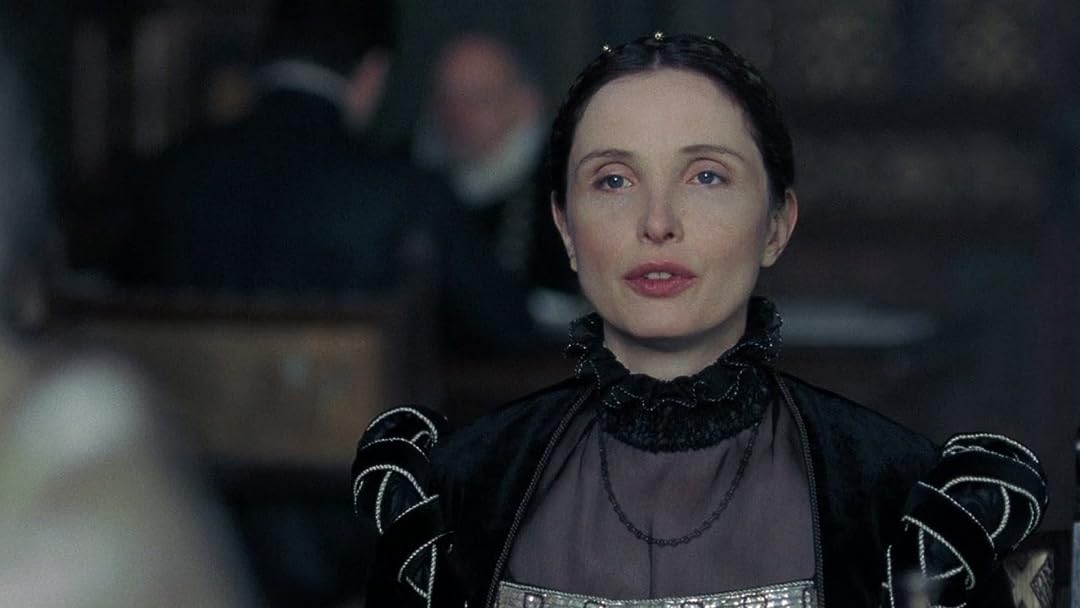 (528)
6.21 h 39 min2011X-Ray13+
Hungary, at the dawn of the 17th century: Countess Erzebet Bathory (Julie Delpy) is considered the most powerful woman in the country - beautiful, intelligent and unwilling to accept a world in which men may bend and break the rules as they see fit.

LoveSkulls13Reviewed in the United States on January 11, 2020
2.0 out of 5 stars
Welcome to an episode of As the Wheel Turns...
Verified purchase
I do like speculative fiction and I am certainly capable of suspending disbelief, but all the pretty wardrobe in the world is not going to convince me that Elizabeth Bathory, one of the most prolific serial killers in the history of murder, was a misunderstood romantic...nor can I believe that she would be as stiff as Julie Delpy, who seems to be so focused on her impeccable English that she forgets to act. I understand that showing the humanity of a monster makes them even more terrifying, but ruthless, perverse, psycho-sexual sadists don't suddenly go wholesale chop-happy on entire villages of peasant girls because a man hurt their feelings. I mean, at least give her some gallows humor, a la Lecter. This is more like "'Elizabeth: the Bathory No One Knew', brought to you by Hallmark--*because we can be edgy too*. Stay tuned for an episode of Jeffrey Dahmer: the Musical".
13 people found this helpful

cutting-edgeReviewed in the United States on September 16, 2021
4.0 out of 5 stars
A startling feminist take on history's woman serial killer
Verified purchase
Hungarian Countess Elzabet Bathory is reputed to have killed scores of young women in her county and bathed in their blood in an attempt to remain forever young, earning herself the sobriquet of the female Dracula. While she is noromally and understandably depicted as a villain, Julie Delpy, directing and acting, gives her story an unflinching feminist twist. It begins with the Count eating on the battlefield beside a huge pile of severed Turkish heads, for which sort of feat he is honored by the Emperor. The Countess, frustrated in her affair with a much younger noble, starts her unconventional beauty regime because she mistakenly thinks he dumped her because she looked too old. When, eventually, it catches up with her (mainly because the Emperor wants her army and lands), before she is walled up in her room alone for the rest of her life, she says coldly and dignity that she wished she had been a man, so they would have have praised her for slaughter. The film is gorgeous, each frame carefully composed like a great Master painting, in lots of browns and green. Watch it.

Tmm BReviewed in the United States on January 3, 2021
4.0 out of 5 stars
Blood Queen
Verified purchase
I waited years to see this movie and it was worth the wait. A beautiful and respected woman of honor who believes she was scorned by her lover turns to greed and murder to keep her beauty alive. For people who want a fast paced thriller this is not for you, but for the ones who want a good story with great acting, intrigue and drama here you go.

Such a good movie about how power and obsession can turn even the kindest of souls into murderers.

22Reviewed in the United States on February 24, 2021
1.0 out of 5 stars
A Waste of Time
Verified purchase
The movie is beautiful in terms of costumes and lighting and etc, and the music is... fine... You ever been to a middle school play where half the kids don't want to be there and the main star is the only one taking it seriously but she's actually the worst actor of all? The writing is also terrible.
One person found this helpful

Crystal NelsonReviewed in the United States on December 15, 2013
5.0 out of 5 stars
Good Movie
Verified purchase
I just watched the movie The Countess. The movie is about Erzsébet Bàthory (Elizabeth Bàthory). The Countess that killed many girls and noble alike for their blood to keep young. This movie isn't about vampires, it's a historical movie about her life and times.

A lot of people have a misunderstanding of the medieval times. The movie did a great job representing the time. You can see that in her time women had rights and spoke their minds, the people in her time, didn't act that much different from us. You also got to see that the royals had less freedoms than the peasants. You could relate to any of the people in the movie. You get to see that Erzsébet was human as anyone else. She had many affairs with women and men. To the people that think homosexuality is newly invited thing. Think again! It's been around since forever.

The acting was superb. I do not know how historical accurate this movie about her life is, because there are some that don't think she did those crimes, and it all was made up to ruin her. I never found her that interesting, to kill with unjust reasoning as she did, just turns me off. But this movie makes you be the judge of her.

The movie portrays a great ruler, a very powerful woman that spiewhirls down to a very weak woman, who's obsess in staying young. The movie shows her lunatic quite well, to how she sees what she thinks the blood is doing to her, to what everyone sees. In the end her obessiness vanity is her downfall. I think her punishment was quite fitting for her, which I will not tell. Does this make me want to read about her? Yes. All in all a very good movie.

Dexter LecterReviewed in the United States on April 23, 2017
5.0 out of 5 stars
She's a lady! Wow wow wow she's a lady!
Verified purchase
A film that shows (asides from the killing) beauty in a time of complete utter filth. The English spoken is elegant . The clothing is meticulously chosen. And the actors and actresses are believable(except the priest with the purple hat). And it's a fun disturbing film for one that doesn't really show any voilence. Leaning your imagination to fill in some blanks. This is a collectors film for every reason anyone should start a film collection.
3 people found this helpful

Tn DReviewed in the United States on October 30, 2012
5.0 out of 5 stars
Scary but Interesting Movie
Verified purchase
What was great about this movie is that it arose my curiosity in a strange way. I don't watch scary movies. However, this one fascinated me by presenting a really complex and interesting woman. Until the end, I was never sure if I should feel sorry for her or find her repulsive. In the end, I felt more sorry for her.

Julie Delpy was outstanding as a director and actress. I have never heard of her before this movie, a fact which I deplored greatly. The film described the countess' dreadful action but managed to slip in the alternative explanation for the myth of the blood countess which was that the story was fabricated by a count, jealous of her power and wealth. It was about power, greed and the desire to dominate a strong and beautiful woman by using deception and her weakness for young handsome man.

This is a strong and meaningful movie.
4 people found this helpful

HCReviewed in the United States on October 2, 2021
1.0 out of 5 stars
Couldn’t watch it.
Verified purchase
I love Julie Delphy’s work and have greatly enjoyed all her movies… except this one. It is a grisly, bloody, disturbing movie and I could not get past the first 15 minutes. It is based on a true story… and why anyone would want to relive (and visually watch) that horror is beyond me. I would never recommend it to anyone.
See all reviews
Back to top
Get to Know Us
Make Money with Us
Amazon Payment Products
Let Us Help You
EnglishChoose a language for shopping. United StatesChoose a country/region for shopping.
© 1996-2022, Amazon.com, Inc. or its affiliates