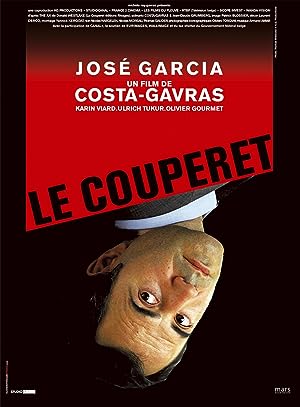 Andrew EllingtonReviewed in the United States on October 24, 2011
5.0 out of 5 stars
It's very smart...
Verified purchase
I love telling people that Russell Crowe recommended this film to me. It isn't really a lie, more like an exaggeration of the truth. I follow him on Twitter (so sue me) and he was raving this film a few years back, talking about how Jose Garcia was phenomenal in it. He got my interest, and considering that the Leading Male category is notoriously my favorite, and Russell Crowe is my favorite current leading man (so I trust his taste level), I had to bite here.

`Le Couperet' is a very modern take on the film noir. It isn't as stagey as the classics, and so it breathes with a little more follow-through, much like Curtis's '97 masterpiece, `L.A. Confidential'. The story told is that of Bruno Davert, a middle-aged business man, married with two children who is very good at what he does. Despite his loyalty to his company, downsizing and relocation costs him his job. Two years later he is still unemployed and the economy is at such a low that he can't find any work. Desperation devises a plan in his head where this otherwise rather sensible man becomes a cold blooded killer, tracking down anyone who stands in his way of getting a plum job in a well-to-do paper company. Sure, he's nervous but he has to do this.

Perfectly meshing two worlds (it is serious and dark and provocative and yet equally witty and humorous), `Le Couperet' is a gem of a film. The construction and pacing is splendid, never aching on particulars long enough to become tiresome, but constantly solidifying our attention with its sharp edits and story progression. And then there is Jose Garcia, who is flawless. He delivers one of the best performances of the aughts, delving deep inside this man's psyche to find the heart of his newfound chaos. The way Jose wears each murder on his skin (scrub with soap) is achingly realistic. He also understands how to shade this performance to find the nuggets of humor and even charm in this everyman-turned-killer.

Costa-Gavras directs a winner here, a film that is sure to entertain as well as provoke.

Hank PutnamReviewed in the United States on May 7, 2016
4.0 out of 5 stars
Great idea for a plot
Verified purchase
Great idea for a plot. Based on the novel, The Ax, by Donald Westlake, who authored many books, under other names. Some have been remade a few times, like Point Blank, ie. Payback. This one centers around a paper manufacturing executive that is 'downsized' when the factory moves to a cheaper country. Like a good engineer he comes up with an effective plan- kill every top candidate for the job he wants, and kill that guy, too.
Along the way, Westlake's character raises some interesting points about the myth of the Great American Dream in the suburbs and the death of the middle class in the U.S. This is the film Costa-Gavras made in France. Well directed with a sure hand.

jenesuispasgothReviewed in the United States on November 24, 2015
5.0 out of 5 stars
Extraordinary black comedy
Verified purchase
I saw this movie the year it came out, about 10 years ago. I found it hilarious, subversive, well acted and very well directed. I purchased it because I want my friends to see what French cynicism can bring to cinema. :-)

Michel V TranReviewed in the United States on March 16, 2013
5.0 out of 5 stars
Great movie!
Verified purchase
Love this movie with it's dark humor and great actors! Hopefully, it will not inspire anyone to follow the hero's example in the movie! How the globalization and the New World Order is transforming decent and otherwise nice people into predators... somehow, the use of the "preemptive war" principle used by the American Empire by a common man. Brilliant!

Poulik PoulikReviewed in the United States on April 26, 2013
5.0 out of 5 stars
Great movie!
Verified purchase
Bitter humor, real characters, right to the point! A brutal exposure of our ugly side and the ugliness of the world we live in.

StellinaReviewed in the United States on August 10, 2010
4.0 out of 5 stars
You like thriler....this one is for you
Verified purchase
First time I watch it in Paris..I loved it.. and the next step is to own this great story
Jose Garcia is a brilliant versatile actor...he play comic also great...the story can be any work place and promotion, being replaced ..etc- wonderfull Director C -Gravas

TapTheLineReviewed in the United States on September 4, 2018
4.0 out of 5 stars
An extraordinary tale about the devastating consequences of unemployment.
In today's France, a long-term unemployed father of two decides to take matters into his own hands by following a grotesque plan: to kill all the antagonists applying for the same job that he does. Greek director Costas Gavras (''Z'', ''Mad City'') approaches the theme of unemployment and its potential consequences in a rather extreme manner, attempting to show through the use of hyperbole the contemporary condition regarding job-seeking and the brutalization brought by the distortion of the original meaning of antagonism. Gavras is always making movies with socio-political dimensions and this one is not an exception, even though ''Le Couperet'' is also darkly funny at some parts and overall it constitutes a highly pleasurable viewing experience which can appeal to all fans of European cinema and not only them. José Garcia delivers a memorable performance as the deranged middle-class man who just had enough with everyone and everything. The secondary characters are also well-acted and the final result is a highly recommendable film.
RATING: 3,5/5.

Bert vanC BaileyReviewed in the United States on April 8, 2013
4.0 out of 5 stars
Black comedy about the nasty world of work
An enjoyable movie, despite its implausible/not very promising premise. It'd work fine as a comedy, but it isn't; not quite. It might also have based a sociological/political polemic about how the current world of work makes us all one another's enemies; but, again, it's nothing quite so earnest. Instead, we get both, or something in between, and perhaps works best in this hybridized formulation.

A laid-off executive goes about killing off those who might compete against him for any opportunities in his field. This is the shaky foundation, but the acting is top-rate and things unfold in an extremely well laid out way -- including a few near-chuckles and a couple of scenes that make one ache in the quiet suspense.

You know things are being crafted by the practiced hands of a master with the late introduction of a subplot about illegality elsewhere in the family. It's plausible and adds to the proceedings without shouldering aside the plot.

In any case, we worry about the protagonist, no matter how nasty he really would have to be to leave strewn behind so many cadavers of people so like himself. Costa-Gavras has us asking: how can he possibly end this mess?

Not preposterously, as it turns out, considering that premise. It fits nicely within the protagonist's wonky world that we've consented to peer into.

The actor, José Garcia, has the role of a lifetime in this: it's a difficult part to play (again: absent the laughs, or any rending of garments), yet that's what he does - and to a curious degree of perfection. Also watch for the chameleon-like Karin Viard, little known to most outside of French cinema but probably the country's most natural actress today. She's already got an impressive body of work behind her, and is flawless and very engaging in her rather minor role. (How come few Hollywood stars accept small roles in which they can shine, while in their recognized prime?)

Recommended.
See all reviews
Back to top
Get to Know Us
Make Money with Us
Amazon Payment Products
Let Us Help You
EnglishChoose a language for shopping. United StatesChoose a country/region for shopping.
© 1996-2021, Amazon.com, Inc. or its affiliates