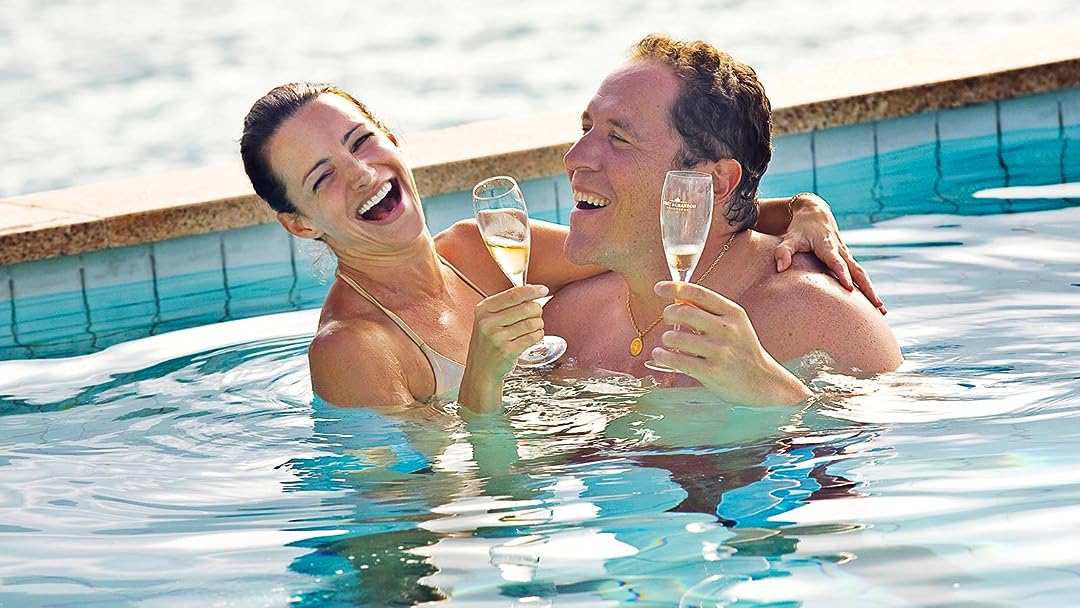 (10,059)
5.51 h 53 min2009X-RayPG-13
Vince Vaughn stars in this laugh-out-loud comedy about eight friends who discover their participation in a resort's unconventional couples therapy activities is anything but optional.

PatStratReviewed in the United States on February 2, 2020
5.0 out of 5 stars
So many one-liners
Verified purchase
This is one of my favorite Vince Vaughn movies. There are so many hilarious scenes in this movie, it doesn’t seem to get old. My favorite scene in the movie is the Guitar Hero battle in the cabin. The dialogue is classic Vaughn delivery. I laugh every time.
8 people found this helpful

FillReviewed in the United States on May 10, 2021
3.0 out of 5 stars
Just raunchy no real good humor in it.
Verified purchase
I just would have to classify this as raunchy wasn't that funny and was a uncomfortable blending of fantasy and reality some people really do face marital problems but some of the situations depicted here are totally unrealistic. If you want something that's funny and definitely fictional and not to be confused with the way couples really interact maybe something more like Mr and Mrs Smith, or keeping up with the Joneses or the egg and I or Spencer Tracy and Catherine Hepburn movies.

Amazon CustomerReviewed in the United States on March 11, 2020
5.0 out of 5 stars
I LOVE THIS MOVIE!
Verified purchase
I'm home ill, I'm bored, I love this film, and rented it to watch for the umpteenth time, b/c I needed a laugh. Mission accomplished.
4 people found this helpful

CarolynReviewed in the United States on January 23, 2021
4.0 out of 5 stars
Awesome Movie
Verified purchase
I watched this with my boyfriend, because I love romantic comedies. It’s also a good break from the horror/suspense movie binge we went on earlier this week.

I liked that it opened with a really funny sequence. Right off the bat, the sequence draws you in. My favorite couple in the movie was Ronnie and Dave. I just felt like they always knew what they wanted and didn’t get distracted as the other couples, but had some issues. My boyfriend and I laughed a few times throughout the movie. I love when he takes a genuine interest in the movies we choose to watch together. In my opinion, the movie is really good after dinner and over dessert. Watch it when you’re happy. It can only make you happier! :)

S. OlenReviewed in the United States on May 25, 2019
1.0 out of 5 stars
Irritating
Verified purchase
I only made it 20 mins into this movie before i had to shut it off it was boring the guy who wants to go on the vacation was driving me absolutely batty. I gave it a shot but bleh
3 people found this helpful

CCReviewed in the United States on May 24, 2015
3.0 out of 5 stars
Okay run-of-the-mill romantic comedy, IMHO. Not bad, but could've been better fleshed out.
Verified purchase
I was debating whether to give this movie a 3 star or a 4 star. Too bad Amazon doesn't let you rate in 0.5 stars.
I liked the movie overall, though I admit the main reason I rented it was because Jean Reno was playing the couples therapy guru (loved his role & performance).
Vince Vaughn's character would probably be considered stuffy and uptight for a comedy, but unfortunately he just happens to be my type and I'm biased towards him.
I found Jon Favreau's character hilarious and fun for the most part; he would've been my favorite character, had he not thrown some very personally off-putting offhand remarks.
I feel the movie didn't do Faizon Love's character justice; least development opportunities IMHO due to his physical condition and the fact that his "spouse" is a party-girlish young woman who's way too young for him; it's as if the film put Shane there, just so there'd be a token minority. And the backstory with his ex-wife lacked the most substance - can't feel for their successfully newfound love (except the fact that it's simply stated so).
Jason Bateman's character all but ruined the entire film for me (would've considered purchasing it if I didn't had him so much). I just downright loathed his utterly self-centered and self-absorbed personality all throughout the movie. He was probably (intentionally) helpful ONCE in the entire film for something that he didn't have any personal stake, and a real jerk the rest of the time. I would've much better preferred it if Jason got things a lot tougher than everyone else in the end (and actually had to work much harder to earn his happy ending).
Also, I wish the wives had a bit more of their own personalities, too (with the exception of Trudy). I didn't find Malin Ackerman, Kristin Davis, and Kristen Bell's characters really standing out as unique individuals, like their husbands (contrast how the wives interact with each other or when everyone else is around, as opposed with the husbands).

Then again, in the end, this is just a light romantic comedy, and a pretty short one at that. Maybe I'm setting standards too high.

Aaron PettolaReviewed in the United States on July 31, 2020
5.0 out of 5 stars
Awesome movie!!
Verified purchase
1 of my top 5 favorite movies!! Watch it dozens of times!’
2 people found this helpful