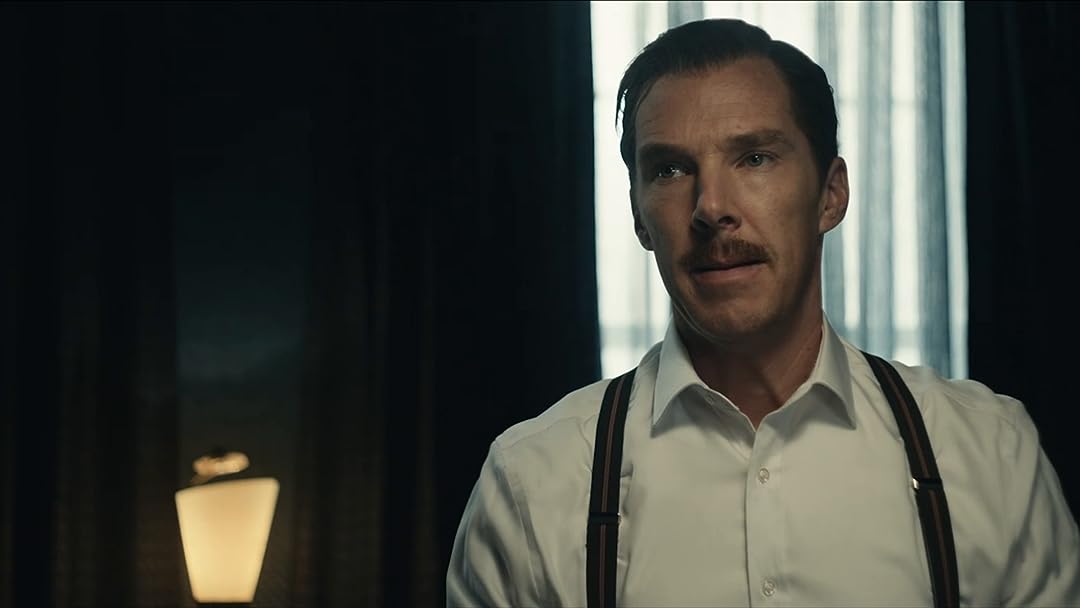 (9,212)7.11 h 52 min2021X-RayPG-13
Benedict Cumberbatch (DOCTOR STRANGE) and Rachel Brosnahan (“The Marvelous Mrs. Maisel”) star in this true-life Cold War spy thriller about British businessman Greville Wynne, who must form an alliance with a Soviet spy to prevent a nuclear confrontation.

Victoria BloomReviewed in the United States on April 18, 2021
5.0 out of 5 stars
Its a true story folks
Verified purchase
Someone wrote that it was an unoriginal, run of the mill, spy movie. I guess they did not notice that this is a true story. It did not come out of someone's (limited and unoriginal) imagination. It is very moving because it actually occurred. The actors did a great job at recreating these real human beings that went through this very real experience and helped save the world from nuclear war. I am old enough to remember the Cuban Missile Crisis and how scary it was.
233 people found this helpful

FranciscoReviewed in the United States on April 17, 2021
5.0 out of 5 stars
Inspiring
Verified purchase
It's refreshing to see a movie about people being selfless and doing something for a cause greater than themselves.
136 people found this helpful

William KentReviewed in the United States on April 21, 2021
5.0 out of 5 stars
Excellent Cold War Drama
Verified purchase
Based on a true story, Oleg Penkovsky, most important known Russian asset to US and British intelligence leading up to the Cuban Missile Crisis, and Greville Wynne, who served as a courier and go between. Benedict Cumberbatch is outstanding as usual. The actor who plays Oleg Penkovsky, Merab Ninidze, may be the best in the cast. Rachel Brosnahan is strong. Anton Lesser has a small role. Angus Wright is so very very British. Five stars for sure. You get your money's worth and more.
98 people found this helpful

P SmithReviewed in the United States on April 19, 2021
5.0 out of 5 stars
A heartwrenching story of two extremely brave men.
Verified purchase
I could barely watch some scenes because I knew the fate that lay ahead of the protagonists. Cumberbatch is a wonderful actor but so were the other members of this cast. Some said that this film was not worth the fee to see it. I could not disagree more. This is a bit of history that I lived through when we all sat around, staring at our television sets, wondering if the Russians were going to launch their missiles from Cuba. The mood of that grim time is very well, almost brutally, portrayed.
87 people found this helpful

jenny latimerReviewed in the United States on April 23, 2021
5.0 out of 5 stars
The best movie I have watched in over a year!
Verified purchase
Finally, finally, finally! A movie worth the money that kept me on the edge of my seat. Brilliant and enthralling the entire time.
63 people found this helpful

Elle Shopper LadyReviewed in the United States on June 12, 2021
5.0 out of 5 stars
This is a true story of one small act that saved the world
Verified purchase
I always prefer true story films - so WORTH it! The "After" is as interesting as the "Before" and "During".

This was a story about what real people did in a real moment of extreme life threat to the world.
It is a story I must talk about because is one of the most important ones of my teen years.
1962 - Passionately ignoring all but my own mandates as adulthood approached- no matter what - in my Jackie K clone fashions, working studying and dreaming of my Handsome Prince to come.

Our coming of age - all was new..... many new tools for world powers were new - how would we use them?
Nuclear power, U-2 and other information helpers...a whole new way to be "my brothers' keeper".

World Peace as a main course at the UN - not a dessert.

People like me will love this film that clips a segment of the story of those days.

We lived that moment - when we CHOSE to save the world and not blow it to smithereens.
No spoilers but pay attention - the first simple quiet moments of the film may not seem worth attention, but they ARE the thing.

One man thinks and decides and acts - and states his awareness of the likely outcome for him, and yet chooses to act in the interests of world peace.
Although others like him existed - they would have been unknown ot one another and so the awful loneliness of the man.
The timing on the part of the thing was clever - seasonal cloud cover obscured the view for U-2 and other surveillance.
The man on the ground - the LONE HERO is the one who must help.

The film is well done technically and use of quality approaches in sets, costumes, makeup, and camera work are appreciated - they did not let us down.

I smiled: Tom O'Connor. as writer seems likely to capture the Irish flavor of things in those days.
...as does the Western European flavor in Production and Direction. Thank you so much - good work.

The Acting never lost me for a moment:
Merab Ninidze, the actor who played the part of Oleg Penkovsky, the Russian war hero who saved the day for all good nations, will treasure this role forever, as a fine Georgian himself, so good.
Benedict Cumberbach is PERFECT as his UK contact and partner in the rescue of the world from certain nuclear war, Greville Wynne.
Rachael Brosnahan was super in the role of Emily Donavan, who bridged things among Russian, British and American powers in the story.

Even if you rent it, watch it more than once - or twice - till you appreciate the story. The gravity of the Cuban Missile Crisis was such that the many tellings of the story from varying perspective are still happening.

On October 22, 1962. I was studying for my drivers license, but set it aside and sat with my siblings hugging parents in front of the television, as the JFK Cuban Missle Crisis Broadcasts played out for us.
I remember, veteran of lots of John Wayne Movies and a good large family of American Patriots, thinking to myself after JFK announced his ultimatum to "Stand down Gentlemen" ...
"That's just what we do - something threatens , we catch it and fix it". This is intense but no big deal.

Later on, as age and priorities sorted themselves, the awesomeness of that moment in world history. sank in.
The Nike sites were set up in our totally gold coast residential town, and soon after dismantled, and all that was left was the heavy-duty access road - to accommodate the weight of the missiles on flatbeds. We PLAYED there - using it to test our teenage cars for efficiency and 0-60 mph quicktime. That "straightaway" was to fun -- my Hillman Minx did it in under 7 seconds.

Plans for Fallout Shelters were on my parents' table where, with other tech wise friends they planned....not so different from "Blast from the Past"
Fortunately, the crisis passed and our basement remained cache shelves for "Delicious jams and jellies"
Tomatoes for sauces, piccalilly for Dad, and a freezer full of frozen treats. A much better idea, no?

While we saluted the flag and sang our. "God Bless America" with enhanced passion and devotion, people like the heroes in this film chose to think us worth it and risk all to keep it for us.

I feel that each and all of us could be a bit better at doing our part to be worth their sacrifice.
As long as America is a government of, for and by the people we are obligated to do our part and yet most feel paying some taxes take care of that - and geting trash to curbside nicely...and maybe voting.

How many of you tell the story- as a story- to your children - to make it real?
I am finding that I did some good but in places where I thought they KNEW - I was often really wrong...they needed me to SAY and say again till the good thing was part of them.

They grow up wonderfully fit for the Third Millennium but sometimes just MISSING PARTS
The story of the heroic character and integrity of our heroes - are we good when challenged even in small ways? It's not so hard. Maybe we can be better.
What do you think?

elaine arizonaReviewed in the United States on May 2, 2021
5.0 out of 5 stars
Excellent Film
Verified purchase
As someone who was a college student during the time period of this excellent film, let me say this was very well done. The acting is perfect for the time. Everything from the costumes to the attitudes between the countries represented is reminiscent of living through the fear and pessimism of the missles of October.
The fact that these brave men were instrumental in preventing nuclear disaster makes for an entertaining yet heart wrenching story.
53 people found this helpful

HouTexReviewed in the United States on May 14, 2021
5.0 out of 5 stars
Riveting film based to the Cuban Missile Crisis and the heroism of two men
Verified purchase
Tonight I watched "The Courier" on Amazon featuring Benedict Cumberbatch, Merab Ninidze, Rachel Brosnahan. Well worth the $20 rental. It was a double barrelled performance by Cumberbatch and Ninidze. Five Stars.

The film's portrayal of the Soviets really captures what I often refer to as the Soviet/Russian "flat effect" i.e. a nation that does not show the usual signs of emotion like smiling, frowning, or raising their voice. They seem uncaring and unresponsive - perhaps residual chronic PTSD that occurs in a country that suffered 27,000,000 casualties during WWII.

While it purports to be filmed in Moscow it was in fact filmed in Prague. It features the crème de la crème of Socialist Realist architecture, called Stalinist Empire style, the style of architecture used in the construction of buildings during the reign of Josef Stalin. It's conspicuously present in the Czech buildings featured in the film --- you will find cheaper renditions in Mongolia.
41 people found this helpful
See all reviews
Back to top
Get to Know Us
Make Money with Us
Amazon Payment Products
Let Us Help You
EnglishChoose a language for shopping. United StatesChoose a country/region for shopping.
© 1996-2021, Amazon.com, Inc. or its affiliates