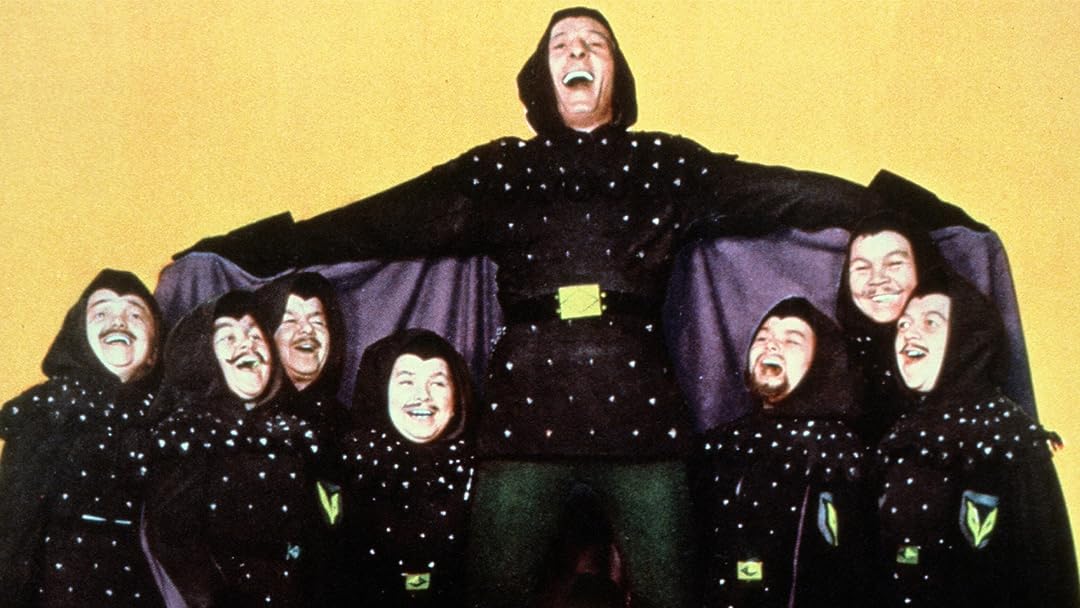 Phyllis Ann KarrReviewed in the United States on January 17, 2017
5.0 out of 5 stars
The Middle Ages As They Should Have Been
Verified purchase
I first saw this movie when it came out, loved it then, have loved it my entire adult life. While I quite like Danny Kaye, I don't like his every movie; in my opinion, "The Court Jester" is easily the very best one he ever made. Its only possible contenders in this category being "The Inspector General" and possibly -- I have seen it only once -- "Wonder Man." But the Jester wins hands down. Its excellence may have something to do with the fact that while "The Inspector General" has so far shown up on two of my budget DVD multiple-title collections, "The Court Jester" remains higher-priced and usually alone or with at most one other Kaye movie.
Unfortunately, this past December when I decided finally to give myself the Christmas present of this movie, Amazon had it available only in PAL. Fortunately, a player taking both formats became a necessity of life for me when I could get the Halas & Batchelor Ruddigore only in PAL. But I'm sure "The Court Jester" is going to reappear in NTSC. Perhaps eventually in Blu-ray as well. It's well worth the investment! Not only is it a superb spoof, but it looks as lavish as if it were an actual, serious Hollywood medieval epic of the period. And I think the swordfight between Kaye and Basil Rathbone has to be in the running for the best (if deliberately funniest) such swordplay ever filmed.
20 people found this helpful

SamuelReviewed in the United States on April 12, 2021
5.0 out of 5 stars
Incomparable musical comedy finally available in high definition and true color on Amazon Prime
Verified purchase
Simply put, the funniest film I've every seen and the most amazing, breath-taking performance by a talent without equal. This is not cinematic trickery or screen vulgarity for the sake of humor. It's cinematic artistry by the only performer with the dancing, singing, elocutionary skills to create a movie without the cameras, sets, and editors. But include them, and the result is screen entertainment that rivals "Singin' In the Rain," "Wizard of Oz" and "The Bandwagon" -- all at once!

I've never understood why this film failed at the box office--a sad commentary on American culture and public taste in the mid-fifties, an era remembered for trite, empty-headed hit songs like "How Much Is That Doggie in the Window," "Hound Dog," "Sixteen Tons," and "If I Knew You Were Coming I'd Have Baked a Cake." Danny Kaye cannot play dumb. His is sophisticated entertainment based on the singular execution of witty and tricky "texts" exceeding the elocutionary and acting-dancing skills of any performer before or since Danny Kaye. (I came to appreciate his gift after, first, discovering Cole Porter's virtuoso song lyric, "Let's Not Talk about Love," and then hearing it performed by the person for whom Cole wrote the song--the only person capable of negotiating its tongue-twisting challenges at demon speed.

I did not see "Court Jester" in the theater (I don't recall hearing anything about it as a teenager). And every print I've seen--rented or purchased on VHS or DVD--has been a badly faded fuzzy print. I expected this most recent print from Amazon Prime to be no different. To my surprise and sheer jubilation, this is the first print to rival the quality of a pristine 35mm movie in a first-class movie theater. Still a relatively obscure jewel of American cinema, "The Court Jester" promises to loom larger with each passing year.

F. S. L'hoirReviewed in the United States on May 31, 2021
5.0 out of 5 stars
They Don't Make Comedies Like This Anymore!
Verified purchase
And it's a shame.

What a superb comedy with music! It'll tickle your funny bone and make you feel glad all over. The gags are LOL (until there are tears in your eyes), and Kaye, Johns, Lansbury, Rathbone et al are splendid. (And was that Raymond Burr playing Sir Griswold?)

The swashbuckling swordsmanship of Danny Kaye and Basil Rathbone is entertaining in itself.

I found the film just as funny today as it was when I was about 10-years old (if not more). And I have never forgotten the immortal lines: "The poison's in the vessel with the pestle; the chalice from the palace is the brew that is true."

Do yourselves a favour and watch this film. You'll be glad you did!
2 people found this helpful

Carollynn H.Reviewed in the United States on April 5, 2019
5.0 out of 5 stars
A great and fun Classic!
Verified purchase
This movie is my New Years Eve tradition. So much fun, and great songs. Amazing to see Angela Landsbury (Murder, She Wrote) and Glynnis Johns (While You Were Sleeping) as young and beautiful women. Danny Kaye is a treasure! Basil Rathbone is a classic villian! Don't skip the opening credits and really listen to the words.
9 people found this helpful

Happy ReaderReviewed in the United States on January 12, 2015
5.0 out of 5 stars
A Classic Comedy to Rival "The Princess Bride"!
Verified purchase
We first meet Hubert Hawkins (Danny Kaye) dressed in a velvet cape and cowl at a forest hideout. He laughs at a wanted poster for The Black Fox and then launches into a funny song, with great accompaniment dance:
"Only the stoutest arm
The bravest heart
With a magic charm and a good head start
Will ever out-fox the Fox"

But Hawkins is just a gentle wanna-be. He left the carnival to join the anti-tyranny cause of the Black Fox, hidden in the forest. The tyrant in question is King Roderick I, who slaughtered his predecessor's family - he thought! The Black Fox is hiding a babe who survived, and it carries the Purple Pimpernel birthmark to prove it.

Hawkins and the Captain (Maid Jean, played by Glynis Johns) must infiltrate the King's castle and open a secret tunnel to allow in the Fox and his men. How it all goes wrong and then all goes right is a hilarious comedy. I am a huge fan of "The Princess Bride" and "The Court Jester" has the same manic comedy. The latter just doesn't have as many one-liners, because so much of the comedy is physical, and Kaye was the master of physical comedy.

Such as when the witch Griselda puts a spell on the hapless Giacomo (Hawkin's disguise): "Repeat after me. I am craven and thou art my master."
"Yes, master. You can snap me in and snap me out."

Which leads Giacomo to romance the princess, "I offer myself to you. All of me. My heart. My lips. My legs. My calves."

Probably the most famous sequence, though, is the beginning of the joust between Giacomo and Sir Griswold:
"The pellet with the poison's
in the vessel with the pestle.
The chalice from the palace
has the brew that is true."

Remember that?
Then it changes - and you've got a flagon with a dragon. Try saying the words with the actors in the movie. It isn't that easy, especially if you're laughing!

This DVD is presented in "widescreen version enhanced for 16:9 tv's". It is 101 minutes of super fun. The only DVD extra is a theatrical trailer for "The Court Jester". The movie was released in 1955, as far as I've been able to find out, but my DVD case says 1956. I purchased my DVD from this page, and It does not have subtitles available. Audio dubbing, however, is available in French.

DJ StumpyReviewed in the United States on April 19, 2017
5.0 out of 5 stars
Hilarious and clean, such a great movie!
Verified purchase
They totally don't make movies like this anymore. Hilarious without resorting to any crude or crass jokes. Smart and witty. And of course some amazingly talented actors and actresses who actually play the part and not just get paid to look pretty. I cannot recommend it enough! Now, if you will excuse me, I'm going to go willow waley it away!
14 people found this helpful

GottaDoSumptinReviewed in the United States on December 29, 2020
5.0 out of 5 stars
Danny Kaye at his best.
Verified purchase
Danny Kaye at his best. But, then again, he always put his best foot forward. And, he looked pretty good in tights and tunic. Stellar cast, all proper actors, playing it straight to Danny's natural jester persona. "The pellet with the poison's in the vessel with the pestle; the chalice from the palace has the brew that is true!" -- classic -- stands up to the test of time. A must-see, for all ages.
One person found this helpful

I was a teenage scaredy catReviewed in the United States on May 7, 2020
4.0 out of 5 stars
So silly, so funny
Verified purchase
I never expected to like this but that first song and dance got me. So silly, so funny. Danny Kaye in his best; he's playing a man in a Robin Hood-esque gang but, alas, it's his job to tend to the baby. His most important job in this tending is to present the baby's bottom for worship, because thereupon lay the royal birthmark, the purple pimpernel.
2 people found this helpful
See all reviews
Back to top
Get to Know Us
Make Money with Us
Amazon Payment Products
Let Us Help You
EnglishChoose a language for shopping. United StatesChoose a country/region for shopping.
© 1996-2022, Amazon.com, Inc. or its affiliates