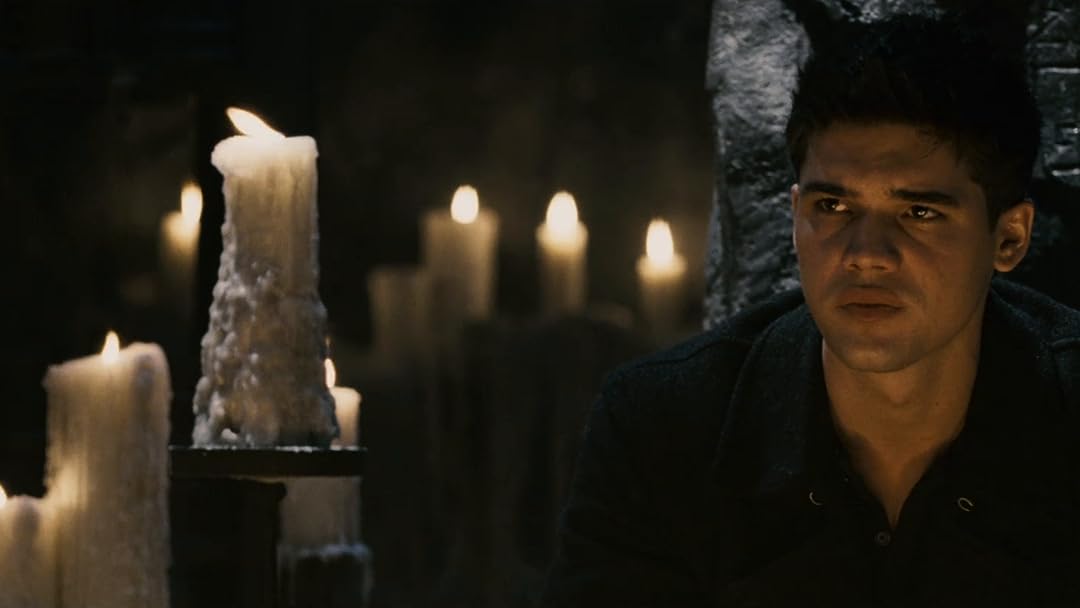 (3,889)5.31 h 37 min2006X-RayPG-13
Four teenage warlocks are about to face their greatest challenge as their long-missing fifth descendant has returned to wreak havoc upon those whose ancestors betrayed his family three centuries ago.

H. BalaReviewed in the United States on June 16, 2020
4.0 out of 5 stars
"Ooooooooh - witchy!!"
Verified purchase
Maybe some plot spoilers from jump.

No one knows where the Power came from. In 1692, in the Massachusetts colony of Ipswich, five powerful families steeped in the dark arts formed a covenant. One family sought more than its share of power, and was exiled. For centuries, nary was there a trace of that banished family. Until now.

Cut to present day, as we eyeball the Sons of Ipswich, four teenagers, age sixteen or seventeen. Caleb, Reid, Tyler, and Pogue - all students of the priveleged Spencer Academy. They're so tight-knit that nothing seems able to dissolve their bond. Hahahaha!

They're descendants of the magical families, and gifted with supernatural powers passed on by ancestry. The caveat is that the more these addictive powers are used, the more they prematurely age the user. And when they turn eighteen, they will "ascend," thereby increasing their powers a thousandfold. In the past, the temptation to use these powers have proved to be irresistible to others, at the cost of their very lives. And, tonight, unbeknownst to the Sons of Ipswich, the bloodline of a long-vanished family resurfaces.

Oh, it's about to get CW. It's the start of the new school year. An outdoor party is being held. The Sons of Ipswich show up, having dropped off from a cliff. At the party, they meet newcomers Sarah Wendham (Laura Ramsey) and Chase Collins (Sebastian Stan), both of whom promptly ingratiate themselves into the group. Caleb Danvers (Steven Strait), the oldest and most level headed of the Ipswich bunch, and days away from his eighteenth birthday, falls hard for Sarah. Sarah reciprocates the attraction, to the consternation of Reid, the youngest and most rebellious Ipswich son. Meanwhile, a triangle forms amongst Pogue, new kid Chase, and Kate (Jessica Lucas) who is Sarah's roomie... and Pogue's girl. It's a lot of characters to shuffle thru.

The creepy begins when that same party produces a student's corpse, courtesy perhaps of a drug overdose. That night, Sarah gets the feeling she's being watched in the showers. She's not wrong. Meanwhile, Caleb wakes up suddenly, sensing that someone has channeled the Power. Next morning, he's driving his car when a darkling - a manifestation of the dead student - appears in the passenger seat, startling Caleb and causing him to collide head-on with a truck. Caleb survives without a scratch. Years ago, you may have seen the movie trailer.

These unsettling incidents are just harbingers of more sinister events in the offing. It dawns on Caleb that a malignant supernatural force is on the prowl. Further events soon have the Sons of Ipswich at each other's throats. And, me, I sensed a bit of Baron Zemo in Winter Soldier fkcery going down.

The trailer doesn't quite lie. This is a fun popcorn flick. The Covenant is reminiscent of The Lost Boys and The Craft in its hip, horror-laden, teenage sensibilities. However, it improves on those films in the CGI department. The Covenant boasts some nifty visuals. While not as inventive as I had hoped, the film does come up with neat ways of showcasing the young warlocks' powers. I wish it had an R rating, instead of PG-13. I craved even darker, more brooding, and more horrific scenes. But that's just the ghoul in me.

Starring a promising complement of gorgeous, then unknown kids, this is a rollicking entry in the action/horror genre. Steven Strait, Taylor Kitsch, and Sebastian Stan stand out. Stan, in particular, chews up the scenery. Laura Ramsey doesn't bring in the sexy as much as she ushers in the cute. The sexy label adheres better to her hot roommate Jessica Lucas, while Strait and Kitsch take over the smoldering look department.

So, nada complaints about the production values. It's a good-looking film, saturated in dark, brooding colors and tones, while the banging hard rock soundtrack serves to drive the story and lends immediacy to the scenes. The Covenant also benefits from the insertion of certain themes cloaked under the guise of fantasy horror - notably, themes of addiction and that sense of immortality and invincibility that you feel when you are young.

3.5 out of 5 stars. I got mad like for this movie, so I hesitate to state the negatives. But here goes. I feel the movie would've been better served with a tighter script. For instance, how many times have we seen the female lead tell the hero, "I'm scared" and the hero responds with a "Don't be"? Bits in the movie's middle drag. And there isn't enough jeopardy, not enough casualties. The ending seems rushed and feels abrupt. Frankly, I expected more from the showdown between Caleb and the exiled Ipswich descendant. By the way, the film doesn't even really try to camouflage the baddie's identity. What else? The other Sons of Ipswich could've been showcased more (Tyler was basically non-existent). By the movie's end, I didn't have the sense that everything had been resolved. Maybe the studio suits were thinking sequel? Joke's on them.

Jim EcoinedReviewed in the United States on May 24, 2019
5.0 out of 5 stars
If you like supernatural then you'll love The Covenant.
Verified purchase
This movie leads in with a student party in the woods. Lots of beer, dancing and some arguing but that is interrupted by the police arriving. They proceed to chase the 4 sons of Ipswich who lead the chase to the edge of a cliff but they continue to drive like the road is still there. The police stop on the brink of the cliff and believe the car they were chasing has crashed onto the beach below. The story progresses from there and is fast paced and interesting. It's not too creepy but is more about coming of age and gaining their full power and one rogue son trying to take over the strongest son's power. I highly recommend this movie.
5 people found this helpful

hottiebiscotti82Reviewed in the United States on December 10, 2017
1.0 out of 5 stars
Renny Harlin strikes again!
Verified purchase
Watched this movie to go along with a podcast (How Did This Get Made?) and I have to say it doesn’t even deserve the 3% it got on the Tomatometer. All the boy band butts and Bucky Barnes in the world couldn’t save this movie. I felt like the movie didn’t know what time period it wanted to be in: the clothing, hair and tattoos looked like the 90’s but it was clearly set in 2006. It was like watching Twilight on massive doses of anti-depressants, and I don’t mean that as a compliment. Pay attention to the multiple shots where Renny Harlin displays his weird obsession with feet. At one point it’s two consecutive shots!
9 people found this helpful

Lanna E.Reviewed in the United States on February 15, 2017
3.0 out of 5 stars
A Fun Dark Movie
Verified purchase
I saw this movie years ago and totally forgot about it, until it popped back up again. I rewatched it and I have to say it's a fun movie to enjoy when you have nothing to do and just want to kill time to be entertained. I would consider this movie the witch, warlock version of the Lost Boys meets a male version of Charmed with just a touch of Harry Potter, just a touch like a drop or two of it. The soundtrack/score is awesome. I love the remix version of White Zombie's "More Human Than Human." The movie does have romance, if you're looking for that sort of thing in a movie. Also, if you are a fan of Sebastian Stan, you can see the young Sebastian Stan in action. He sure has come along way. The scenery and atmosphere of the movie is great, it really sets the mood and tone of the film. For instance, the old barn and the long off the beaten path original Danvers' home really stuck out to me. Again, it's just a fun entertaining movie.
9 people found this helpful

DestinyReviewed in the United States on March 10, 2021
2.0 out of 5 stars
Meh.....
Verified purchase
This movie how can I say this when it first came out I remember watching it and my thought was meh ok a male version of witches(warlocks). I watch this movie again and my thoughts is the same. Seriously funny Craft came out out in 1997 I believe and it was about witches so hey I'm guessing whoever came up with the idea for this movie was saying hey they had a movie on witches(there were many movies made on witches) why don't we make one on warlocks. This movie has a few intresting moments but it's not a great movie, it's just ok. I skip a few scenes cause it was getting boring. This movie is ok to watch it you are truly bored or just trying to past the time.

Shena BentleyReviewed in the United States on December 29, 2019
4.0 out of 5 stars
Pretty good movie
Verified purchase
I read through the reviews before giving this movie a shot and it seems a lot of people didnt like it. I thought it was a pretty good movie, directed more toward teens or women. Has a cute love story and the CGI was better than expected. Loved the action, just wish there was more of it throughout the beginning and middle versus the last 15 minites or so. Also wish they would have dove more into the backstories of the main characters (maybe show some flashback scenes of how the blood line came to be, how his father abused his gift, etc). Other than that, it kept me intrigued for the most part. Definitely feel like i could relate this movie to a Twilight type of feel. All in all, glad I gave it a chance. 😊
Giving it 4 stars to offset some of the critics that didnt give it much credit lol. Without the offset, id probably give it a 3 or 3.5 at most.
2 people found this helpful

ksweatt84Reviewed in the United States on May 31, 2016
2.0 out of 5 stars
Teenage male witchcraft movie...just as ridiculous as it sounds.
Verified purchase
I will be honest, I watched this movie just to see how bad it was. I was not disappointed, it was as awful as expected, but in a fun way. I would say it is like Twilight, but with warlocks/witchcraft. I think they were going for a male version of The Craft, but failed miserably. The boys are very moody, cliche, shirtless, and homoerotic. The acting is so-so and a story that lacks anything interesting. The special effects are good and if you like to watch cheesy horror movies to make fun of it, then this is your kind of movie. I enjoyed laughing at how completely ridiculous this movie is. I don't regret watching it, but I do not care to ever watch it again.
2 people found this helpful
See all reviews
Back to top
Get to Know Us
Make Money with Us
Amazon Payment Products
Let Us Help You
EnglishChoose a language for shopping. United StatesChoose a country/region for shopping.
© 1996-2021, Amazon.com, Inc. or its affiliates