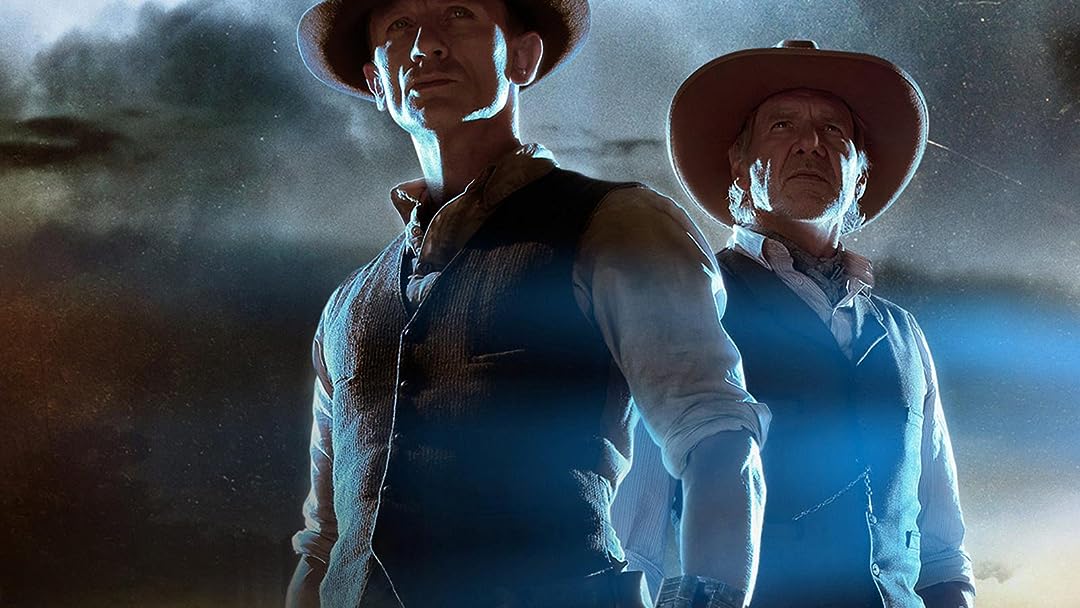 (11,038)
6.02 h 15 min2011X-Ray13+
Daniel Craig and Harrison Ford star in this action-packed sci-fi western from the director of Iron Man (Jon Favreau). The Extended Version of this epic adventure includes more action not seen in theaters!

UndawntedReviewed in the United States on October 19, 2021
4.0 out of 5 stars
Cowboys & Aliens is a Ride like No Other, So Saddle Up and Be a Man
Verified purchase
Cowboys & Aliens is a movie with one big problem: its audience. The cross-genre romp combines cowboys on the range with aliens in spaceships. What is there not to like? There is action, romance, emotional resonance, explosions, gun slinging, and aliens.

This movie is fun.

The film will not garner an Academy Award nomination, but that does not mean Cowboys & Aliens is a Razzie Award winner either. Just the opposite. Good acting, plot, characterization are pivotal to this good old-fashion western.

The Old West… where a lone cowboy leads an uprising against a terror from beyond our world. 1873. New Mexico Territory. A stranger with no memory of his past stumbles into the hard desert town of Absolution. The only hint to his history is a mysterious shackle that encircles one wrist. What he discovers is that the people of Absolution don't welcome strangers, and nobody makes a move on its streets unless ordered to do so by the iron-fisted Colonel Dolarhyde (Ford). It's a town that lives in fear. But Absolution is about to experience fear it can scarcely comprehend as the desolate city is attacked by marauders from the sky. Screaming down with breathtaking velocity and blinding lights to abduct the helpless one by one, these monsters challenge everything the residents have ever known. Now, the stranger they rejected is their only hope for salvation. As this gunslinger slowly starts to remember who he is and where he's been, he realizes he holds a secret that could give the town a fighting chance against the alien force. With the help of the elusive traveler Ella (Olivia Wilde), he pulls together a posse comprised of former opponents-townsfolk, Dolarhyde and his boys, outlaws and Apache warriors-all in danger of annihilation. United against a common enemy, they will prepare for an epic showdown for survival.

Jake Lonergan, played by Daniel Craig, cannot remember who he is. He wakes up with a weird metal cuff on his arm and no recollection of how he acquired it, where he has been, or how he ended up in the middle of the desert. Once he makes his way in town to the local saloon, he is met by others who do know him and want him in jail. He is an outlaw.

Woodrow Dolarhyde, played by Harrision Ford, is a cattle rancher. His business is the only thing to keep the small community from becoming a ghost town. He has an ungrateful son, but the loyalty of his men.

Ella Swenson, played by Olivia Wilde, is an alien with one quest: to end the dominate alien's genocide and theft. Her people were exterminated by this alien race, and she has plans to stop them from doing that exact conduct on Earth.

The destructive aliens only want gold. Gold fuels their spacecrafts, but the metal is scarce, leading them to murder and plunder other worlds that possess it.

Together these three characters bring several groups of people to their banner: law men, outlaws, and Native Americans alike to end the terror from the alien assailants.

Woodrow Dolarhyde: Look. When I was just a little bit older than you are now, all this was Mexico. Word came that the Apaches was riding towards a settlement called Arivaca. My father wanted me to be a man, so made me ride out with the garrison, banging on a drum. Boy, was I scared. Well, we got there, it was too late. They were all dead and the whole place was burnt down. This settler fella came crawling out of a burning cabin. He was bad. He knew he was gonna die. Burnt bad. He rolled over, looked up into my eyes, and he said "Kill me."

A movie where aliens meet revolvers.

This film has heart and soul. Two facets many action-adventure movies are missing today. The Entertainment Industry is too obsessed with technology to realize CGI is not the story or the answer, people are. When optics rules your film and the technology becomes a character, then how do the humans compete with shiny objects, explosions, and visual illusions?

Humans end up on the editing room floor.

Cowboys & Aliens is the right balance of human interactions and technology. The audience is allowed to feel for the characters and understand the odds against them. There are some hard lessons the characters learn about themselves and how they interact with one another. The audience witnesses a man teaching a boy what hard choices lie ahead of him: "Be a man," Woodrow Dolarhyde says.

Such honesty and complexity is devoid from movies these days.

It seems as if moviemakers are more concerned with politics and social engineering, then to realize the human story is what matters. What drives the human condition is what makes the audience want to watch. The father-son interactions with Woodrow Dolarhyde are great. I wish there were more movies about these divine masculine rites of passage and relationships instead of name-calling (toxic masculinity). The only behavior that is toxic is the presence of man-haters.

Westerns are usually a man's fare, but this film allows the audience the chance to see a woman in an action as well as romantic role, men coming into their own power through courage and tests, and enemies becoming allies to fight for something bigger than themselves. All in all, a pretty well-made film.

But have audiences been so jaded by political correctness that they are unable to see a great movie when one present itself to them? By the low rating of this movie, that would be an affirmative.

Take off your postmodern, dystopic glasses, Cowboys & Aliens is a film connoisseur's treat.

My review will be posted on Prime as well as IMDB.

Have a great and wonderful day.

Richard PengalaReviewed in the United States on November 13, 2022
4.0 out of 5 stars
Cowboys disrespected by aliens
Verified purchase
ETs on steroids terrorize strange people in the old west in their pursuit of gold. It turns out the real hero with a heart of gold is a lovely gunslingin' woman who ain't what she appears to be
and has more cojones than most men.....but who is she really?..This crazy comic bookish tale is not so far fetched except for the fact these aliens are too big, strong and monstrous. Smaller bodies and bigger odd oblong heads with large almond shaped dark eyes would match up with human descriptions of close encounters they've had with ETs for thousands of years..

Sharon L.Reviewed in the United States on October 21, 2022
5.0 out of 5 stars
Cowboys vs Aliens
Verified purchase
Love this movie. Previously owned on DVD.
Someone borrowed it and never returned movie to us. So when I found it on Amazon on Blu-ray,
Purchased it. Daniel Craig, Harrison Ford star. Love this movie.

Karen MarieReviewed in the United States on October 20, 2022
5.0 out of 5 stars
How Did I Never Hear About This Movie?
Verified purchase
It's terrific! Cowboys and aliens - what's not to love?

Ride2live Reviewed in the United States on October 7, 2022
5.0 out of 5 stars
When Hollywood succeeds.
Verified purchase
A great family movie. So rare in these crazy times we're living.

Kindle/Audible CustomerReviewed in the United States on July 6, 2022
4.0 out of 5 stars
If you know a filtering service...
Verified purchase
There was a lot I chose to filter (language, nudity, gore), but the movie was really interesting and surprising. With the filters, I give it 4 stars. (I wouldn't watch this without them.)
One person found this helpful

Critic's CornerReviewed in the United States on July 31, 2012
4.0 out of 5 stars
Aliens of the Old West! (Minor Spoilers)
Verified purchase
Cowboys and Aliens brings out an original concept and although is based on the comic book/graphic novel of the same name, is nearly a complete story in and of itself.

The film starts out as a standard cowboy film; drunk, irresponsible son of a cattle baron screwing around with the locals since he feels his dad's name will protect him. Part of the gang includes an American Indian whose later history is revealed and is quite touching. But I am getting ahead of myself.

It's night and just when you think you are going to watch another Western drama, the aliens come. Their ships are sleek and fast. They whip out these hooks and kidnap people off their horses, the street, stores, etc. You really feel the passion, the fear and excitement as they come zooming in!

Of course 19th century peoples have little concept of these so they are dumbstruck. The plot rolls on like this, with an amnesiac cowboy and a strange weapon on his wrist; a cattle baron who has second thoughts about absolute power; and a woman from a strange planet, herself a victim of the alien hordes upon her own world.

Harrison Ford is great as the crotchety old cattle baron, whose backstory is filled with tales of how to be a man and how his sympathy for those less powerful than himself changes the viewer's opinion of him.

Daniel Craig plays Jake the amnesiac; barely escaped from the last alien culling, can't remember it and only knows that he must ride on. But can he?

And the third person, the woman from another world in human form who wants to help these 19th century men and women to avoid the fate that her world suffered from. Great acting!

Best Scene: When the Cowboys & Indians fight the fast-moving aliens, it's really a site to behold. Guns, arrows and laser explosions for a good 15 minutes of fanboy overload.

Bottom Line: The film plods along at times, and a plot hole or two prevent this one from making it five stars. Still, loved the action, you care about the characters and really sympathize with Jake, a man out of his league but adapts to what is really needed of him. The Spielberg touch with the turtle-like aliens, their delicate hands and fierce demeanor, really put in some frightful appearances.

The DVD's special features including several Making Of's, how the aliens were formed, the creation of the aliens, some exclusive interviews with director Favereau, Spielberg and a few of the main actors. Great product.

Simon JesterReviewed in the United States on October 7, 2022
3.0 out of 5 stars
I laughed a lot...
Verified purchase
I laughed a lot and rolled my eyes a couple of times throughout this one. This is mindless entertainment at it's finest. An all star cast that mostly phones in their lines. Most of the effort went into the special affects instead of the story. Clancy Brown is in the movie so I gave it an extra star.
One person found this helpful
See all reviews
Back to top
Get to Know Us
Make Money with Us
Amazon Payment Products
Let Us Help You
EnglishChoose a language for shopping. United StatesChoose a country/region for shopping.
© 1996-2022, Amazon.com, Inc. or its affiliates