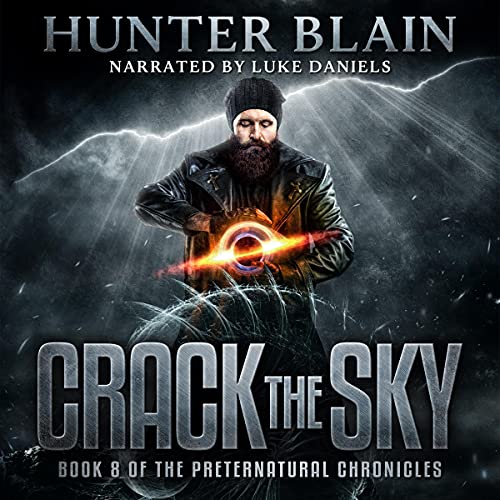 In the heart of darkness...do what must be done.

Depweg is lost in time, unwittingly finding himself in a stream of reality that has broken off from the single river our universe safely resides upon. John has no choice but to do the impossible and retrieve his best friend or risk the two parallel timelines crashing into one another. Teaming up with the newcomer, Jose, our hero, must act quickly to prevent a catastrophic flood of crashing realities.

Poised at the center of our galaxy lies the most destructive force in the known universe, and John will get a firsthand experience at its unimaginable power. To save Depweg, our hero must travel through the supermassive blackhole, and back in time to find a single needle in a thousand haystacks.

Waking up in a strange place, Depweg is gifted with something he hadn’t known he had craved since John had first told him of the unstoppable prophecy and coming apocalypse; solace. For the first time in years, Depweg can take a breath, finding peace in the knowledge that the end of the world is far, far away. There’s only one thing that could make his relaxing vacation even better while simultaneously providing the perfect reason to never go back....

Having lost everyone he cares about, a defeated, hopeless young man will allow chaos into his heart in exchange for a chance at revenge for the fallen. All too late, he realizes the cost as the law of unintended consequences proves to be absolute, and a war is waged on people the young man once called friend.

Behind the scenes, powerful marionettes pluck at fraying strings, guiding the story toward its inevitable conclusion. Will John be able to cut away his strings to become a real boy? Or will he remain a puppet to his fate?

4.8 out of 5 stars
4.8 out of 5
223 global ratings
How are ratings calculated?
To calculate the overall star rating and percentage breakdown by star, we don’t use a simple average. Instead, our system considers things like how recent a review is and if the reviewer bought the item on Amazon. It also analyzes reviews to verify trustworthiness.
Top reviews

C.T. Top Contributor: Star Trek
5.0 out of 5 stars Ooof, many gut punches!
Reviewed in the United States on September 2, 2021
Verified Purchase
I am a huge fan of the Preternatural Chronicles and John Cook the Irish Vampire. I have followed him from I'M GLAD YOU'RE DEAD to the current volume. Unfortunately, I have noticed a certain level of power creep and it's become a bit like Supernatural where the protagonists go from being guys who hunt monsters to guys who regularly fight the Devil. I was worried that this book would continue this trend. I'm glad to say I was completely wrong and that this book's biggest appeal is that it is a character piece.

John Cook's best friend, Depweg, is someone who has lived virtually his entire life alone with no chance of a normal life. An accident involving time travel results in him being transported to the Eighties where he discovers his chance to live a quote-unquote normal life. Unfortunately, it has the potential to unmake everything in existence. Horrific choices must be made, consequences will happen that could not be imagined, and some really good distractions from the apocalypse that has been building for multiple books.

Laurie C. Davis
5.0 out of 5 stars Actions Have Consequences
Reviewed in the United States on August 23, 2021
Verified Purchase
Crack the Sky, Preternatural Chronicles 8th book by Hunter Blain, is an adventure in a rich setting unlike no other. Blain has taken the reader to an incredible place you don’t want to leave. John Cook is faced with a dark choice that has consequences. There is a quote in the book that visually describes the story; “You will always have to face the consequences of your actions”. And, John does with gripping emotions that touch the soul.

Hunter Blain weaves a story that reflects the massive amount of research that went into the action and plot. Once again, he has amazing characters that grip your imagination and make you love them. Yet leaves you always wanting more.

I love Crack the Sky for many reasons; including Blain’s trademark humor but it is John Cook’s relationship with others that engage your mind. It is truly a place to visit and thrive.

When is the next book coming?
Read more
Helpful
Report abuse

Ronnie Malina
5.0 out of 5 stars Loved it!
Reviewed in the United States on October 4, 2021
Verified Purchase
Hunter Blain continues the story of John the Vampire and his quest to save the world. John is a complicated character with complicated friends, but his sense of humor and penchant for extreme violence makes the book fun!

Depweg, his oldest friend (who happens to be a Werewolf) has an equally important story arc in this book. As a matter of fact, his portion of the story actually had me in shock. First, it was his absolute bliss at his new lot in life that had me totally invested in his story. Then, the craziness that happened next shook me to my core. I know it was just words on a page, but the weaving of those words made me FEEL the story.

I can’t wait for the next book in the series!
Read more
Helpful
Report abuse

Amber
5.0 out of 5 stars Impressed beyond belief
Reviewed in the United States on October 24, 2021
Verified Purchase
When I came across Hunter Blaine`s first book " I'm glad you're dead" I was amazed at the imagination, creativity & humor of the author. I was enthralled in a new world of vampires, monsters and heros of all kinds and higher dimensions, the land of fairy, heaven and hell, good vs evil or is it evil vs good? This is a series with all the attributes that make up a great fantasy novel. Horor, comedy, action & adventure, love & friendship, moral compass & forgiveness and little bit of syfy and a whole lot of fantasy. And the most touching is the main character John Cook is a real person who was childhood best friend to the author, Hunter Blaine. John asked if he ever passed away would Hunter put him in a bad ass book so he could be immortalize. Hunter agreeded and kept his promise to John Cook. I extremely recommend this series to anyone who needs an adventure...."Here`s Jonny....enjoy!
Read more
Helpful
Report abuse

James Copeland
5.0 out of 5 stars John On Outstanding!!!
Reviewed in the United States on September 3, 2021
Verified Purchase
This is a very emotional and evocative book. It strikes many chords in a reader and is a wonderful continuation of the series.
As the series is also a tribute to Hunter's doppelganger best friend( his words, not mine), you can feel the love and respect given to one lost.
Hunter has outdone himself with the plot and twists and as much as I'd like to strangle him, we NEED him to continue writing. So maybe just mild torture.
Seriously though, Read this whole series for what it is. A rip roaring good time and tribute to a friend. It is snarky and well written and has loads of laughter to brighten the day after epic battles. Worth every minute of time and dollar spent.
Read more
Helpful
Report abuse

Cory Barbour
5.0 out of 5 stars Another great one!!!
Reviewed in the United States on August 28, 2021
Verified Purchase
Another great instalment in a series that has become one of my favorites! The depth of characters... And their flaws is something that you don't see in many authors, Hunter has earned his place next to legends such as David Gemmell and Jim Butcher in my book. When you add in why this was written....it takes it to a whole other level! Keep it up Hunter... And let's not stop at just the 13, k????
Read more
Helpful
Report abuse

Carl Skoll
5.0 out of 5 stars Crack the Sky will crack your heart.
Reviewed in the United States on September 14, 2021
Verified Purchase
As the chronical of John "Johns On", the plot thickens and becomes even more sinister. Even though I knew where some of this was going (the author ain't keeping it a secret) the writing will give you the feels for sure, which is not what I anticipated from a master of paranormal snarkasm, but Wow! This series continues to be a rollercoaster ride for sure, and I can't wait for the next loop!
Read more
Helpful
Report abuse

Kindle Customer
5.0 out of 5 stars Love the series
Reviewed in the United States on August 26, 2021
Verified Purchase
This is a good book, I usually say I had fun reading these but this one was a bit harder on the emotions, still a really good book. If i say too much I'll spoil things and that's not my way. If you read the others, read this one. If you haven't read the others, buy them, read them, and then read this one! John On!
Read more
Helpful
Report abuse
See all reviews

Well this got weird, fast.

Another character heavy installment of this roller-coaster ride of a series.

As per usual your normal tropes are smashed to pieces, stuck together with gaffer tape and reformed into something warped but beautiful.

Hunter has gone to town with a strong plot many laughs, a bucket of tears and some nostalgia which will make you want to reread the series again.

Strap in for the ride and John On!
Read more
Report abuse

Claire Baxter
5.0 out of 5 stars Why can't you give 5++ stars!?!?
Reviewed in the United Kingdom on September 4, 2021
Verified Purchase
This was an absolute doozy of a book! I laughed, I cried. I laughed a bit more. I cried a LOT more. Hunter, I love and hate your skill as an author in equal measure. John On! ❤️
Read more
Report abuse

Cynon
5.0 out of 5 stars John On
Reviewed in the United Kingdom on August 24, 2021
Verified Purchase
Another amazing book by Hunter
I have laughed And cried so much my wife made me finish the book outside which I humbly did after bitching for an hour thanks again Hunter Blaine
Read more
Report abuse

Kindle deb
5.0 out of 5 stars Fabulous
Reviewed in the United Kingdom on October 23, 2021
Verified Purchase
Love love these books and so hope they carry on. Their funny, witty comments out just enough to add to the story and not make it to silly. Keep it up Hunter not just for your friends but for all the ones who have lost loved ones xxxx
Read more
Report abuse

Marcelle Merritt
5.0 out of 5 stars Emotional rollercoaster
Reviewed in the United Kingdom on September 6, 2021
Verified Purchase
Another great chapter in John's life...what an emotional rollercoaster, it made me cry and laugh. I can't wait for the next instalment!
Read more
Report abuse
See all reviews
Back to top
Get to Know Us
Make Money with Us
Amazon Payment Products
Let Us Help You
EnglishChoose a language for shopping. United StatesChoose a country/region for shopping.
© 1996-2021, Amazon.com, Inc. or its affiliates