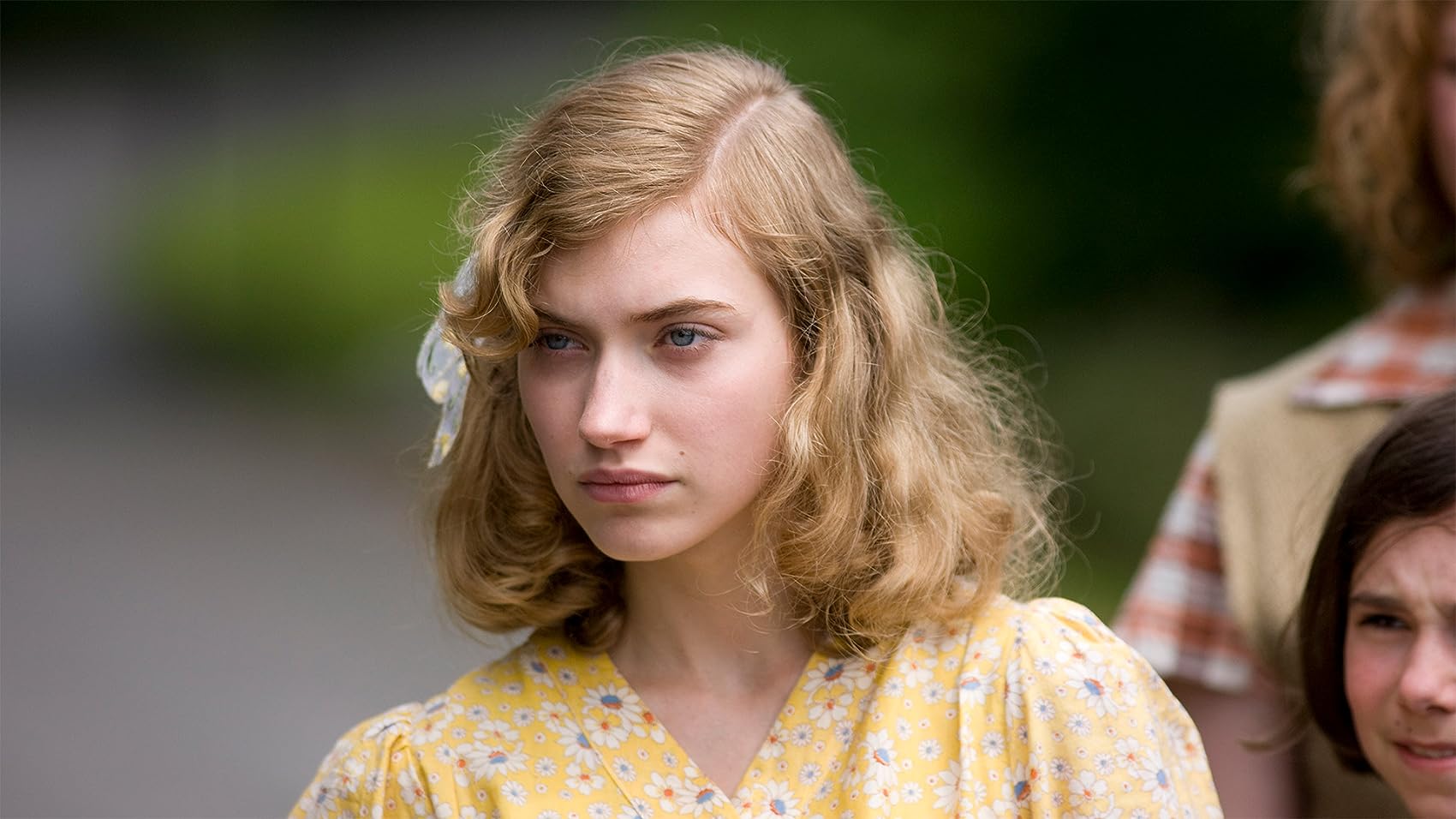 (276)6.71 h 44 min201113+
When a beautiful Spanish girl, Fiamma, appears at an idyllic British boarding school, the girls are immediately threatened by the outsider's perfect allure. Even Miss G, who loved being the most glamorous presence in her girls' lives, becomes obsessed with, threatened and tantalized by Fiamma.

SJMReviewed in the United States on May 19, 2019
5.0 out of 5 stars
I can't believe I haven't heard of this film before!
Verified purchase
This movie is 8 years old, and I've never heard a thing about it! How can that be? Luckily, I'd just happened to stumble across the title and description while browsing Showtime on Prime. Sitting down to watch, it pulled me in right from the very start and I was enthralled throughout. The word needs to get out about what a remarkable film this is! I absolutely loved everything about it! Brits have always fascinated me, as does that era (30s). The style of clothing, hair, makeup, social etiquette and norms were spot on. The story, the characters, the phenomenal cast and their acting, the beautiful cinematography - it's all just amazing. I recommended it to my 24 year old daughter and she fell in love with it too. Now I recommend it to everyone, but I suspect that most men won't like such a true chick-flick like this one. It's also one of the rare films you'll want to watch again.
6 people found this helpful

whatithinkisReviewed in the United States on July 31, 2021
1.0 out of 5 stars
Beautifully shot
Verified purchase
Directed and performed. Flawless except for the fact that this is a film about pedophilia and if the abusive teacher had been a man this would never have seen the light whatever device you use to watch.

It is exquisite but when it came time to rate I found it untenable to participate in the glorification of the sexual abuse of a young girl rendered helpless by alcohol. Raped.

Not okay no matter how beautiful.

Pen NameReviewed in the United States on March 4, 2021
5.0 out of 5 stars
Fascinating film - thoughtful, sad, and erotic in parts!
Verified purchase
Eva Green is perfectly cast as Miss G, in this film about a British boarding school back in what I'm guessing is the 1950's. I also loved Juno Temple as pretty blonde Di, who along with the rest of the girls, are all in love with the amazing Miss G. That is, until beautiful Fiamma (María Valverde) arrives from Spain. What makes this film so interesting is the prevailing loneliness that all of the girls feel, as if their families put them there to get rid of them. Even Fiamma's wealthy father seemingly wants nothing to do with her. Before it's over, it gets increasing sad and even tragic. When it was over, I felt sorry for pretty much everybody!

bronnieReviewed in the United States on October 14, 2019
5.0 out of 5 stars
a hidden gem!...
Verified purchase
a well done period piece. an air of aristocrats, jealously & intrigue — kinda surprise ending; a sign of the times? enthralling from start to finish...
2 people found this helpful

carolyn demarchiReviewed in the United States on November 2, 2017
5.0 out of 5 stars
Such a twist at the end.
Verified purchase
Great thought provoking movie, very unpredictable. Who would've guessed the outcome?
3 people found this helpful

D. RobertsReviewed in the United States on April 30, 2014
5.0 out of 5 stars
Bringing up the girls
Verified purchase
This movie is something like a cross between MEAN GIRLS & THE DEAD POET'S SOCIETY. Eva Green plays a mid-20th century physical education teacher of a very conservative British girl's school. Come to find out, she is an alumnus of the school herself and it appears the experience has warped her a bit. She is totally at home in the company of girls & women, but is a nervous wreck whenever she's around strange men. As one might expect, Sapphic love is her preference.

Along comes a gorgeous young student who is heads & shoulders above the rest of the girls both athletically & intellectually. The young teacher can't help but fall in love with her. In this respect, you could say that the film resembles a girl/girl version of LOLITA as well. Naturally, the other girls get frustrated with the situation, feeling that they are being left out of the attention of their favorite instructor.

There is the framework of the film; a story that details the pitfalls of a school that is overly strict and where the no-fun-rule is always in effect. Typically, this leads to more problems than what the approach is designed to solve.
Will it be the case here? Watch this movie & find out!!
12 people found this helpful

Only-A-ChildReviewed in the United States on January 18, 2013
5.0 out of 5 stars
Outstanding
Verified purchase
CAUTION: SPOILERS AHEAD!

One of the best films I have seen in years. "Cracks" (2009) is a blend of "The Prime of Miss Jean Brody" (1969), "Atonement" (2007), and Lillian Hellman's "The Children's Hour"; but ultimately it is unique enough to maintain considerable originality. There was more of a "Lord of the Flies" homage in the source novel, what with its more savage African setting, but if anything the film works better with that replaced by claustrophobic and cloistered interior sets. Jordan Scott has great acting for-the-camera directing skills. The principle casting is especially good with Maria Valverde excellent and Eva Green (much like Elizabeth Hartman) able to tap into her inherent shyness and bring a more powerful authenticity to her character. And Juno Temple (a ringer for a young Glenda Farrell if you watch a lot of 30's films) is quite simply a force to be reckoned with, something you already know if you have watched her in other films.

What follows is full of spoilers as I am trying to assist people in understanding the story. So if you have not watched I suggest you stop reading and come back for the rest after your first viewing. Then watch it again as like most really good films it withholds at lot of its pleasure for multiple viewings.

So here are a few thoughts from my twisted mind:

You only begin to understand what the screenwriter/director is trying to say when you realize that the story is being told entirely from Diana's (Juno Temple) point-of-view and the other characters are simply plot devices to illustrate Diana's coming of age story. Miss "G" (Eva Green) is another Miss Brodie (Maggie Smith) and Diana is another Sandy (Pamela Franklin). As in the 1969 film, the star pupil gets her back up when the teacher she worships finds someone else to be her student ideal.

A key to both films is Tennyson's "The Lady of Shalott", which was quoted in "The Prime of Miss Jean Brody". "When the Moon was overhead, Came two young lovers lately wed; "I am half sick of shadows," said The Lady of Shalott."

In the poem she is a magical being who lives alone on an island upstream from King Arthur's Camelot. Her purpose is to look at the world outside her castle window in a mirror, and to weave what she sees into a tapestry. She is forbidden by the magic to look at the outside world directly. Looking at the world in a mirror and depicting it in a work of art is an allegory for the life of a teacher viewing the world from an ivory tower and interpreting it for her young students.

In similar ways Miss Brodie and Miss "G" are wonderful teachers and most young girls would have benefited from membership in their groups, mostly because of the breaking of conventions and the encouragement to openly explore the possibilities life offers. But both have fatal flaws. Miss Brodie is judgmental and irresponsible, full of misguided ideals and grievances, and totally confident that the world is as simplistic as she wants it to be. Miss "G's" confidence, on the other hand, is a complete façade; hiding a brittle basket case who can only bloom in the protected niche of the school, despite her seeming openness to experiencing life.

Both are downbeat films but "Cracks" considerably less so. This is because while Sandy's depressing transformation into and betrayal of Miss Brodie was the principle dynamic, Diana ultimately wises up to the folly of what her teacher is about. And Diana's atonement is a very positive one.

Once you understand that Diana's growth is the principle dynamic, the rest of the story fits together rather smoothly. The fatal attraction of Miss "G" to Fiamma (Maria Valverde) is almost a Hitchcock McGuffin, in that it provides a lot of character motivation but is ultimately just a plot device.

Interestingly the climatic scene comes well before the end of the film. It is the scene where Diana is helping Fiamma put on makeup for their "Eve of St. Agnes" feast. The importance of the scene (and the reason they linger on Fiamma's eye contact) is that it is at this point that a part of Fiamma's spirit becomes a part of Diana, something which symbolically happened when Fiamma gave her the bottle several scenes earlier. And Diana takes both bottle and spirit with her when she leaves the island at the end. In "Jane Eyre" this same dynamic occurs between Jane and Helen; with the gentle spirit of Helen passing to Jane and ultimately being the transformative force in her life.

Although I love this climatic scene, my favorite scene comes a bit later when Diana is alone with the headmistress in her office. I think that I like it so well because for a first time director, Jordan Scott has an intuitive grasp of the limitations of sentimentality and she creates a scene which affects the viewer in a way they cannot help, and they cry. This can be wonderful but a director must carefully employ it because it will not work if the viewer picks up on "false" sentimentality. So unlike such scenes in many movies, Juno Temple (who has no lines in the scene) is not weeping, trying to get you to weep. Instead she is trying not to cry; and the scene is so much more powerful because of this restraint, the slick way the scene is edited, and the talent for nonverbal acting that Temple brings to the film.

The ending of "Cracks" is both moving and intriguing, in large part because of the slick editing. They cut between shots of the girls reading a note and shots of the exiled Miss "G" unpacking and staring at a photo of her team (after counting to be sure she only has five items on her nightstand). Then the audio reveals it is not Miss G's message but Diana's atonement note, at which time the editor cuts to a shot of Diana sitting on the ferry with the book, the bottle, and their map. The film goes out on a shot of Diana's face; as she is leaving the cloistered island to take the path in life that she believes Fiamma would have taken.

Then again what do I know? I'm only a child.
9 people found this helpful

GreeceLightningReviewed in the United States on August 24, 2019
5.0 out of 5 stars
Twisted!
Verified purchase
Great film, with a really twisted plot.
2 people found this helpful
See all reviews
Back to top
Get to Know Us
Make Money with Us
Amazon Payment Products
Let Us Help You
EnglishChoose a language for shopping. United StatesChoose a country/region for shopping.
© 1996-2021, Amazon.com, Inc. or its affiliates