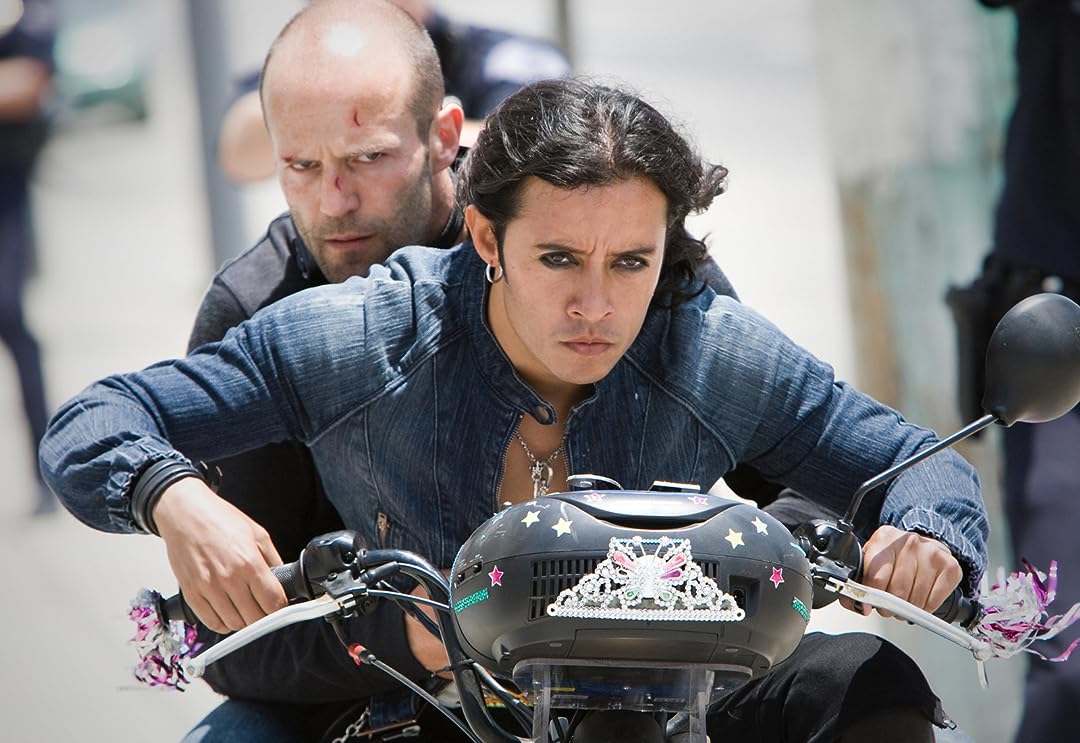 (2,091)
6.21 h 35 min2009X-RayR
In this high-octane sequel, hitman Chev Chelios (Statham) launches himself on an electrifying chase through Los Angeles in pursuit of the Chinese mobster who has stolen his nearly indestructible heart.

joel wingReviewed in the United States on October 11, 2020
3.0 out of 5 stars
Insane overthe top action film about a man chasing after his heart
Verified purchase
Crank 2 is an over the top action film featuring Jason Statham as Chev Chelios. At the start of the film Chev falls out of the sky, is literally scrapped off the cement, then his heart is removed to be given to a gangster, while the rest of his organs are to be harvested as well. He escapes but his problem is he has a temporary heart inside his chest which constantly needs to be re-charged. The movie is about Chev cutting his way through a slew of crooks and henchmen to get his heart back. It's a story full of extremes and jokes.

The outrageous nature of the film is shown when Chelios has to recharge his heart. One time he stops some low riders and asks them to put some jumper cables on his tongue to juice him up. He then runs down the street like he’s Superman. Another time he’s getting beaten by half a dozen cops but then when one of them tasers him he beats up the whole bunch. It's like an old B-movie gone wild. It's outrageous. It's sometimes unbelievable, and yet funny and enjoyable at the same time. You want to see what crazy thing they can come up with next.

The movie is full of guns, fisticuffs, sex and craziness. If you like over the top stories you'll like this.
C

D. LarsonReviewed in the United States on February 25, 2019
4.0 out of 5 stars
Ya gotta have heart!
Verified purchase
A wise sage once remarked that there’s two kinds of people in this world. People who think there’s two kinds, and people who don’t.

Similarly, there’s two kinds of movie viewers in this world. Those who think “Crank” and “Crank 2: High Voltage” are hysterically funny thrill rides with no intention of redeeming qualities beyond amusing us with sex, violence, ethnic stereotypes and insane stunts. And those who think these movies are just disgusting self-indulgent exercises in vulgarity and stupidity.

Put me in the first category. “Crank 2” is indeed a worthy successor to the ground-breaking “Crank”. A little more ramped up, a little bigger budget, a new and even sillier premise, more silicone-inflated mammaries on display. Where is Chev Chelio’s strawberry tart? How many gangsters can Chev take out in a strip club shootout? What was it in Johnny Vang’s cooler that disgusted even the hard as tempered steel nails Chev?

I’d really like to know the answer to that last question. But even without that answer, we’ve got outrageous jokes, fireworks, multiple incidences of gratuitous nudity, open-air racetrack sex, fantastic tattoos, a Godzilla fight, nipple self-amputation, Dwight Yoakum and David Carradine! As Poon Dong, Carradine doesn’t have a lot of lines but his delivery is great!

Amy Smart’s delivery is, ah, not. She’s really hardly in the same movie with Statham, intensity-wise. She occupies space and looks good, but compared to the chaos swirling around Jason and the rest, she’s a little meh. Not that it matters. This is Jason Statham in full loonie mode, and he’s the Stathamist Statham he can possibly be. Is he as good as in the “Transporter” movies?

No, the “Cranks” aren’t in that league. But he’s fun. Is “Crank 2: High Voltage” as good as “Crank”? No, it doesn’t get to have the Shock of the New that the first picture had. In “Crank”, he piled absurdity atop absurdity, stunt upon stunt, stacking the laughs and the “Did they really do that?” higher and higher until the whole teetering mess fell out of a helicopter. In the second outing, we do know what to expect. And that’s delivered in spades. I wonder what more could be done in a “Crank 3”. I’d like to find out.
One person found this helpful

Picky Movie BuffReviewed in the United States on September 30, 2018
1.0 out of 5 stars
...weird...very very weird...
Verified purchase
Had to happen sooner or later. A Jason Statham movie I did not like. Not the fault of the actors many of whom I enjoy watching in other movies, but the storyline was weird. As if they were trying to achieve a "Pulp Fiction"/"Sin City" avant-garde effect and at least for me it did not work. No sense of a plot, but rather a mishmash of quirky ideas off the top of the head of the director. The idea itself was bad. I can imagine people going to see it because of Jason and left the theater shaking their heads. Unbelievably they made a sequel and some people tried it yet again. Thank you Amazon for having it on Amazon Prime. I did not have to spend money to finally see it. Best to watch something else. Note to Jason Statham: I love your movies. Many fans do, but please oh please pick more wisely for future scripts. P.S. "Mega" was great!
4 people found this helpful

endusoneReviewed in the United States on January 19, 2018
2.0 out of 5 stars
Lightning stripper car crash gun fight meltdown
Verified purchase
I put this movie on in the background, figuring it wouldn't require my full attention. Don't get me wrong, I like Jason Statham, but I wasn't expecting an Oscar contender, if you know what I mean. Something maybe like The Transporter...some explosions, a car chase or two, done.

This movie is The Transporter turned up to 11...and hooked up to a 700 foot tall Van De Graff generator which has just been struck by lightning shooting out of Zeus' eyeballs while he is riding a 700hp lawn mower through Chernobyl during a full moon...on fast forward.

I've never seen anything like it. Imagine how many times you think a director could cut during a 10 second long action sequence. Now quadruple that and have a naked stripper spray it with lighter fluid, light it on fire, and jump a car over it.

This is Bevis and Butthead's favorite movie, but not in a good way. Imagine if Bevis and Butthead were real kids that you actually went to high school with and suddenly it wasn't so funny anymore and was actually kind of sad...this is the movie they watch over and over again.

Maybe this is making it sound like you should watch this movie, like watching a car crash. You shouldn't, though. It's not just a fun action movie, it's, "what the hell is this, is my TV broken?"

Giving this movie one star would be like yelling at a senior citizen for driving their car through the front of your house. Yes, they are horrible but you can't bring yourself to let loose with the tirade of profanity that the situation deserves because it's also kind of sad.
14 people found this helpful

Richard PengalaReviewed in the United States on September 20, 2021
3.0 out of 5 stars
A black comedy from hell
Verified purchase
Very imaginative over the top gratuitously violent piece of trash for low brow people hungry for escapism.... yet Mr. Statham & his girlfriend are worth watching for their oddly appealing good chemistry... and there are enough oddball offbeat individual performances to amuse and disgust us at the same time. Not for the squimish. It makes me long for a return to old style censorship of wanton sick graphic violence. The erotic scenes and multi ethnic nuts give comic relief with many quirky & funny cranky performances. Good production values and clever writing/directing.

mattReviewed in the United States on January 25, 2021
5.0 out of 5 stars
An inspired action comedy - better than the first one
Verified purchase
I would have watched as many Crank movies as they released - had they gone for 3+, as long as Jason Statham reprised his role. He's genius as Chev Chelios. This is coming from a person who - when I saw the first Crank trailer - thought it was the dumbest thing I'd ever seen. Glad I watched them because they are now among my favorite movies.
The frenetic action and refreshingly intense filmmaking of Nevaldine & Taylor make this film something special. I recommend it for fans of comedy or action genres.

Kindle CustomerReviewed in the United States on April 12, 2015
5.0 out of 5 stars
It's a COMEDY!!!
Verified purchase
It's impossible to believe that some of the viewers found this movie stupid. It's meant to be a COMEDY! If you pay attention to all the situations and scenes - they are absolutely hilarious (perhaps, with a dark sense of humor). This movie has a very witty plot for a comedy and great acting, pace, cutting, music, etc. If I am not mistaken, this is the first Action Comedy Mr. Statham has done - a very GOOD one. Reminds me of Arnie's action comedies of the 90-s. For a reference, there is a movie Shoot 'em Up (with Clive Owen and Monica Bellucci): clearly made as a comedy, but acted so very "serious" that even accelerates the comedy quality of the movie. I only wish that Jason Statham lifts up to his full comedy action hero potential and make more of similar spectacular films. Eagerly awaiting...
P.S. Do not forget to watch the closing titles - many bloopers embedded with them.
5 people found this helpful

Nick C.Reviewed in the United States on January 9, 2018
5.0 out of 5 stars
but this movie is just darned good fun to watch
Verified purchase
I'm sort of biased as I'm a huge Statham fan, but this movie is just darned good fun to watch. Obviously you check all realism at the door and just sit back and enjoy the show. The editing and such throughout is fantastic, the music is great, there are so many hilarious lines, and Statham of course just steals the show as always. I've seen this movie at least 15-20 times since 2009, and I always see something new (or maybe just forgot!) from prior watches. If you have 90 minutes of time to kill, you MUST watch this movie. I only hope there's a Crank 3, c'mon Mr. Statham you know you want to do it!! :D
2 people found this helpful
See all reviews
Back to top
Get to Know Us
Make Money with Us
Amazon Payment Products
Let Us Help You
EnglishChoose a language for shopping. United StatesChoose a country/region for shopping.
© 1996-2021, Amazon.com, Inc. or its affiliates