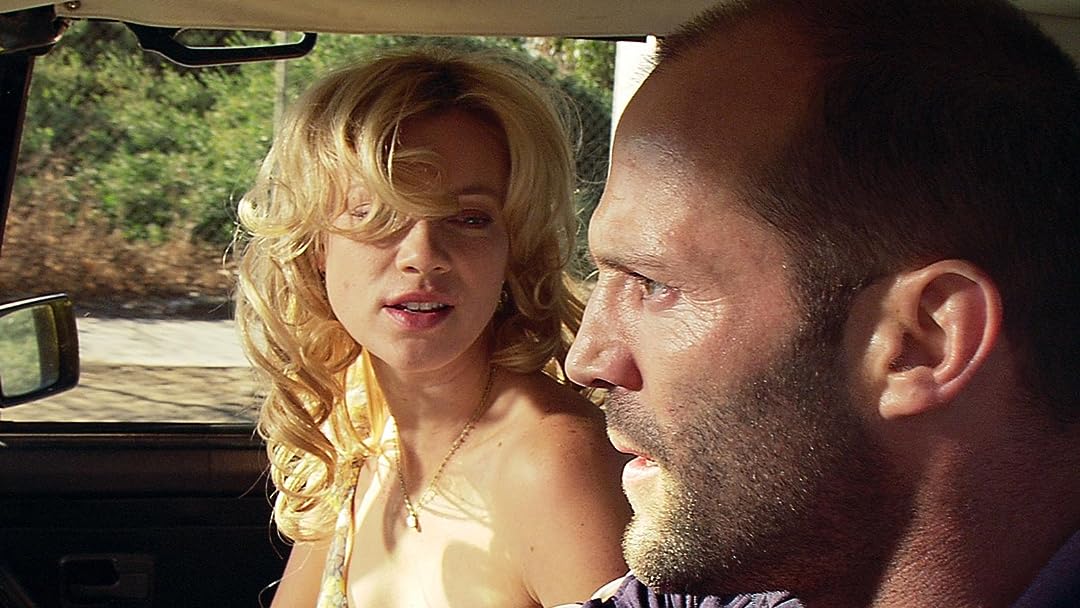 (4,213)
6.91 h 28 min2006X-RayHDRUHDR
An assassin is given a lethal dose of poison that will kill him in one hour unless he can keep his adrenaline pumping long enough to find an antidote or his killer, not necessarily in that order. Jason Statham and Amy Smart star in this frenetic thriller.

Watch with SHOWTIME
Start your subscription
Add to
Watchlist
By ordering or viewing, you agree to our Terms. Sold by Amazon.com Services LLC.
Write review

joel wingReviewed in the United States on September 23, 2021
3.0 out of 5 stars
Like a modern exploitation flick taht doesn't take itself seriously
Verified purchase
Crank is an over the top action comedy featuring Jason Statham which is like a modern exploitation flick. He’s been poisoned so he drives around Los Angeles beating up and threatening people until he finds a cure. The film exaggerates everything from Statham’s poisoning showing his heart beating heavily inside his chest to his friend Dwight Yoakam having an orgy when Statham calls him. It’s not meant to be taken seriously. It turns out to be a great ride. There’s guns, there’s women, there’s chases, etc. Its everything on the exploitation check list.
4 people found this helpful

walletboyniacReviewed in the United States on February 12, 2021
4.0 out of 5 stars
Headbanging to Achy Breaky Heart
Verified purchase
To be perfectly honest, I never found Crank to be as engaging as its sequel, Crank 2: High Voltage. A rare case of the follow-up being better than the original, and maybe that's tainted my score. Don't get me wrong, Crank is a great movie, but they do the hyper-stylized thing so much cooler in part 2 (as well as being an even more over-the-top movie). PLUS it has Bai Ling! I will say this much about this movie: Whoever did the music did a masterful job. Crank is loaded with iconic music cues. And they don't overdo it (if it's one thing that irks me with a soundtrack, it's when they cram in overbearing pop songs at every turn). This guy does it just right, with the rest being a great score by Paul Haslinger (once) of Tangerine Dream. There are some crazy stunts, all done practically. Make sure to check out part 2 (I am biased), it picks up right where this one leaves off.
3 people found this helpful

kookoonutsReviewed in the United States on June 7, 2022
2.0 out of 5 stars
Trigger Warning: Didn't Survive the Test of Time
Verified purchase
This movie is quirky, fast-paced, and in-your-face irreverent. Jason Statham is a god among men when it comes to action sequences, and the choreography and cinematography are phenomenal. I was looking forward to kicking back and being entertained, but a lot has happened in 16 years, and I was not prepared for the scene at roughly 50 minutes. Do not continue reading, unless you want a mid-movie spoiler.
**Spoiler Alert**
50 Minutes into the movie, Statham's character is running out of adrenaline while in an Asian market with his girlfriend. He tried to convince her to have sex with him right then and there to save his life, but she's not having it. She says no several times. He starts grabbing at her body, ripping her clothes, while she's yelling no and all of the onlookers are doing just that - looking on. Suddenly - in a way that only Hollywood magic can provoke - she changes her mind and her "no's" convert to moans and she gets into it, culminating into the entire crowd cheering them on.
**End Spoiler Alert**
I think this particular scene is a good representation of how society, as a whole, is still developing it's understanding of consent, and how it wasn't that long ago that it was publicly glorifying sexual abuse: if you're a real man like Statham, she'll end up liking it, right? I'm not criticizing the writers, directors, or actors. I'm simply stating that this movie is an example of what society found "entertaining" only 16 years ago, and 16 years was not that long ago.

Kindle CustomerReviewed in the United States on January 25, 2021
2.0 out of 5 stars
jason stratham,movies are good,but i don't like crank one or two
Verified purchase
this isn't what i expect of mr.stratham.
its unbecoming for a male actor that is in movies of war,you know when i view transporter i enjoyed it very much.all of his movies are very grand but these two.i hope that he does something else ,that makes his charaters look and feel nice.im sorry but i can't deal with thess movie.i did watch the whole movie.both of them.but i don't like it.thank you.for allow me to watch it.i don't mine paying to see these movies.but the charetor is out of place,look at all the ones he made and then look at these.you may understand what i am talking about.thanks.princessona/barbara
2 people found this helpful

J. MunyonReviewed in the United States on June 15, 2011
4.0 out of 5 stars
plenty good enough for what it is meant to deliver, just not quite 5 stars
Verified purchase
"Crank" with Jason Statham and Amy Smart is a film of action and decent FX where most of the main characters get killed. That said, Amy Smart is very attractive, and who knows if that was a stand in when we got to see some of her anatomy, but the glimpse albeit a short one added to the overall viewing of the DVD release. Of course you will need to forget what is possible and what is not possible as far as surviving horrific drugs, car chases, and gunplay, but that is what you expect when you sit down for this ride. Basically a hit man for the underworld gets revenge and then some, and has a lovely young blonde girlfriend who is willing to have sex in public in Chinatown. Obviously there is a sequel, "Crank 2, High Voltage." Rating the first release for delivering what it promised, I'll give it 4 stars. Dwight Yoakam stars as "Doc" and Valarie Rae Miller would have made my day if she was among the gratuitous eye candy that shared their assets. In the hoodlum's lair there were a few ladies who were open minded with their upper goodies, and this too seemed appropriate to this film. Other than that, I guess I'd have to say this is the genre of opportunity that Jason Statham was meant to star in. IMHO not quite as good as "Scarface" with Al Pacino, but that's sort of like saying a Chevrolet isn't a Ferrari.
3 people found this helpful

Mat Van GoghReviewed in the United States on November 5, 2009
4.0 out of 5 stars
A surprising movie
Verified purchase
This movie wont win any awards, but this is one of the coolest( and weirdest) films I've ever seen. it seems to be almost like a video game, but with real acting, action, drama, stunts, etc. Most of the time it never takes itself seriously and the film goes in and out of reality quite a bit. Its both smart and stupid( but in a good way)That being said, i think it is the most adrenaline charged film I've ever seen ( taking into consideration it only costs 12 million to make) it feel like it costs alot more.Great fun, funny dialogue and situations.
It also contains a spin on the film DOA and its remake.I wont go into anything more there.You would have have to see it for yourself

As far as the DVD goes, a decent amount of extras.The commentary track is one of a kind- it also contains a little picture-in-picture video in the bottom while u can watch the film around it and see how the film was made.I like this feature for the most part. The only problem with it is , while the content in the commentary is informative,feels more like a documentary on the film than a true commentary track where the commentators discuss things going on the screen at that very moment.Instead of putting this a separate entity on the DVD in the special features section, they made it as the commentary track that played in a small box while you watch the film.Either way, its well worth the price.I highly recommend this.
4 people found this helpful

Grant ReedReviewed in the United States on February 16, 2009
3.0 out of 5 stars
Straight action.
Verified purchase
I really can't say a lot about this movie, other than that. The movie is basically a roller-coaster ride. It starts out fast, continues fast, tries to throw drama in along the way, and finishes fast.

Chev Chelios is a hitman, and he was just killed. That provides most of the humor in the movie. There is a little humor when he "changes" personalities when he is around his girlfriend, or talking to her.

The plotline is both loose and tangled up. There is no mystery about who killed Chev, but there is an aspect that indicates he didn't act on his own, but no clues are presented and the answer is given at the end.

The ending makes little sense, but as I said, it's a roller coaster ride. I like the way one poster called her review Kill Bill meets Speed. I sort of agree, but both of those had a better, and more fluid, plot.

Overall, if you like grindhouse theatre, this movie is for you. If you love non-stop action, this is a pretty good movie. In those cases you'll like it, possibly even love it.

If you actually want a story, don't bother with Crank, you'll be disappointed.
One person found this helpful

Dogs &amp; Horses Reviewed in the United States on December 28, 2017
5.0 out of 5 stars
Much funnier than you expect
Verified purchase
I love this movie. It's funny and a non-stop adrenaline rush. The cast is a riot, delivering witty dialogue with dead on comic timing. I was amazed at how good Dwight Yoakum was as the Doc and Statham is droll, gorgeous and perfectly cast as Chelios. Just a fun , rainy day action movie.
9 people found this helpful
See all reviews
Back to top
Get to Know Us
Make Money with Us
Amazon Payment Products
Let Us Help You
EnglishChoose a language for shopping. United StatesChoose a country/region for shopping.
© 1996-2022, Amazon.com, Inc. or its affiliates