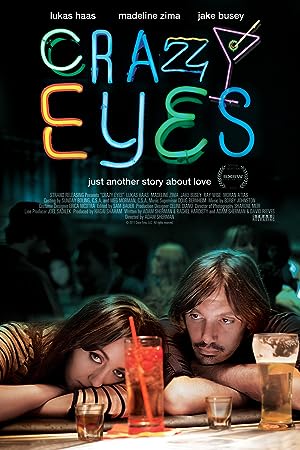 (17)4.01 h 35 min2012X-Ray18+
Zach (Lukas Haas, INCEPTION, MARS ATTACKS!) seems to be living the Hollywood bachelor dream - he's got a house in the hills, the phone numbers for dozens of beautiful women and a hard-partying lifestyle aided and abetted by his bartender pal, Dan (Jake Busey, ENEMY OF THE STATE, STARSHIP TROOPERS).

Amazon CustomerReviewed in the United States on October 18, 2012
4.0 out of 5 stars
Self-examination as catharsis
Verified purchase
This is a film that I would never view out of choice. As a personal acquaintance of the director, I decided to hit play and see where it went. It was truly painful to watch: Not for lack of quality but for abundance of honesty. Public self-examination is not entertainment. The film is not a celebration of profligacy, misogyny, or alchoholism, but a crystal clear view of self-loathing.
Imagine putting your private life on a 20' screen. As a former catholic, it reminds me of the sacrament of confession without the privacy of a confessional: its sole purpose to obtain penance. The truly self-absorbed individual has no need or desire to examine their self-absorption.
Like 'Barfly' or 'Lenny', the film compells the viewer to despise the protaganist for his lack of any saving grace. Both of these films were also painful for me to watch. But each in their own way examined the self-destruction of a suffering intellect. 'Crazy Eyes' is a microscopical window on the suffering intellect of the director.
Many of the harshest reviews of the film are economic, political, and gender whinings of the priveleged reviewers (Starbuck's latte award for the reviewers and exactly how does reviewing films contribute to the enlightenment of mankind). Could anyone possibly sympathize with the protagonist? Unlikely, and certainly not the hope of the director. True penance is no bullshit.
Can I recommend this film? If you found the two aforementioned films engrossing, then you might find 'Crazy Eyes' to be well worth viewing; but be forewarned that it is not conventional LA entertainment. Like witnessing any suffering, it makes you uncomfortable.

Crystal E. AngelesReviewed in the United States on June 9, 2020
5.0 out of 5 stars
Must see.
Verified purchase
Well written, directed and imagined. I truly felt the story as if I was there watching them go through it.

Woman with Big FeetReviewed in the United States on November 5, 2012
4.0 out of 5 stars
Good Examination of Alcoholics
Verified purchase
As a person who has been around many alcoholics and seen many stories about alcoholics, I do have to say that this movie is the best example of an alcoholic relationship that I have ever seen.

Zach is very wealthy, young entrepreneur that has made a ton of money and does not really have a life. The only life that Zach seems to have is drinking and having sex with women who only date him for his wealth. And along comes Crazy Eyes who Zach decides that he has to have sexually. Rebecca (Crazy Eyes) is determined that Zach will only be a friend and Zach is determined that Rebecca will be more.

What makes this movie interesting are the games that are played by Rebecca as she is determined to have Zach on her own terms. Becca believes that she is the better person because she is poorer than Zach, and as such she thinks she knows more about life than he does. Through the whole movie Becca criticizes and belittles Zach even though she does things that are just as bad, maybe even worse than Zach. In watching the movie, you never realize whether Becca is trying to convince Zach that she is a good person, or herself. Throughout the movie the watcher is forced to watch the most disturbing images of individuals throwing their lives away, it is a horror to watch but you are drawn to it.

Drunken bar fights, sex and endless betrayals of friends go on and on in an alternate universe that these drunks call lives. In the end, the movie is a very good study of people who are trying to be normal even though their addictions rule their every waking moment. This movie is a good study on why alcohol can be just as destructive as crack.

John F. BranchiReviewed in the United States on June 29, 2013
5.0 out of 5 stars
lukas is great.
Verified purchase
great , lukas gava a stellar performance. i have almost all of his movies. he is definately worth watching. he should of received an oscar nomination for alan and namoni.
One person found this helpful

Amazon CustomerReviewed in the United States on April 25, 2017
1.0 out of 5 stars
Lame writing and acting
Verified purchase
Flat, unlikeable, unlikely characters get drunk in LA. That's it. Clearly the director has an ax to grind with some alcoholic in LA. A boring, depressing waste of 90 minutes.

reothebeatReviewed in the United States on April 14, 2015
3.0 out of 5 stars
All the characters are pretty much greedy
Several mistakes reviews make with this movie is:

1. "it has a hero." None of the characters are likeable or heroes. No one is a victim either. All the characters are pretty much greedy, selfish, parasitic, mildly manipulative, self-absorbed, or unemphatic. Arguably, they all victimize themselves. It's tempting to think of Lukas Haas as the villain since he is the richest. But really he is oblivious and stupid, and not malicious.

2. "the story has a point" this film is really trying to paint a picture of what Haas and his world is like. There is no clear ending because there wasn't supposed to be one.

3. "this is a love story." rather than a "utopia" it is a "dystopia" of what love isn't. There isn't any real love between any of the characters... except maybe Haas' son.
One person found this helpful

I would give it 2 1/2 stars if I could.. but, not three. It's not the worst thing I've watched in awhile. Just don't expect much. I guess that's the point.. they are alcoholics.
One person found this helpful

Author/Reviewer Geri AhearnReviewed in the United States on July 11, 2012
5.0 out of 5 stars
"CHARMING, ENGAGING, DRAMATIC!"
Zach is currently living what he believes to be the 'Good Life.' He's living the Hollywood bachelor dream-come-true life, and has his own bartender pal right by his side. Top priority for Zach is Party Life with plenty to drink and lots of fun. Then, he meets a woman that he cannot have a relationship with, and the family drama begins, along with issues and challenges. Is he ready to grow-up and step into responsibility as an adult? This film is raw, honest, and entertaining. An Enjoyable love story with Great acting Performance. Highly Recommended!
5 people found this helpful
See all reviews
Back to top
Get to Know Us
Make Money with Us
Amazon Payment Products
Let Us Help You
EnglishChoose a language for shopping. United StatesChoose a country/region for shopping.
© 1996-2021, Amazon.com, Inc. or its affiliates