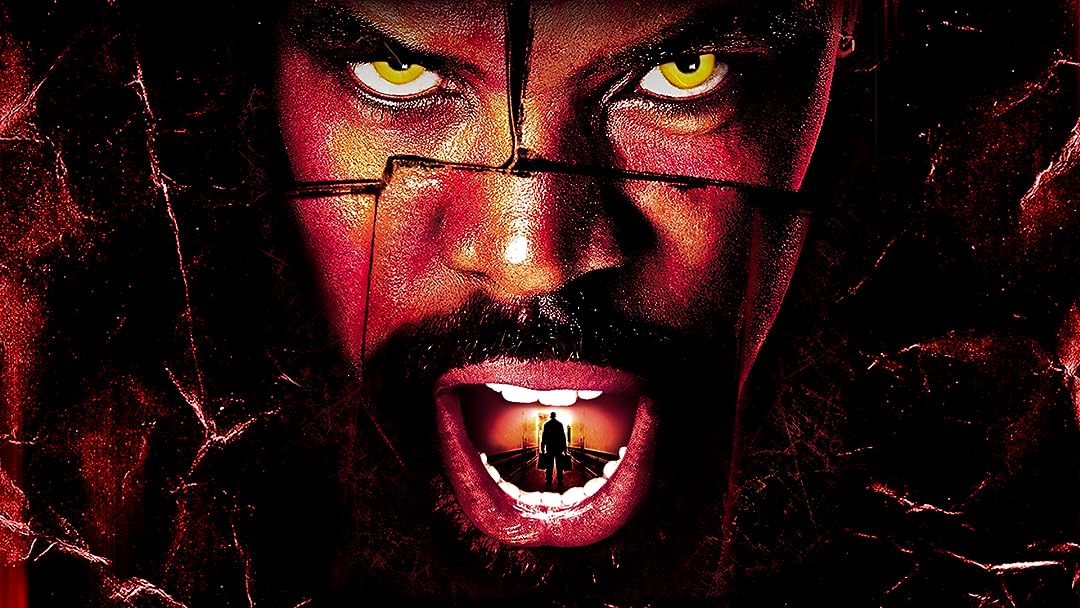 (117)5.91 h 54 min200216+
Ty Adams (Michael Beach) is a brilliant psychiatrist who loves to play God. Ambitious and arrogant, he believes he can cure anyone with the sheer power of his personality. But now, he's treating someone who will shake him to his very soul - a patient who calls himself Satan (Eriq LaSalle).

Logain UT AblarReviewed in the United States on April 26, 2020
2.0 out of 5 stars
Didn't stick the landing
Verified purchase
The first half of Crazy as Hell is good. I really liked it mostly because Enriq La Salle is the smoothest Satan I've seen. Really, DeNiro's Satan (Louis Cypher) is good but a bit rough. Pacino's Satan in Devil's Advocate is good and funny in a maniacal way. Viggo Mortensen's Satan in The Prophecy is awesome and a bit scary and Peter Stormare's Satan in Constantine is hilarious. But Enriq La Salle's Satan was just too smooth man, like, wow, Crazy as Hell should have featured more of him. Michael Beach (Ty Adams) is cool, I've seen him in a lot of films but his character here is boring, annoying and utterly predictable.

This brings me to the second half of the film which fell apart for me. The first half of the film it's written well enough to begin to anticipate situations that would affect Ty Adams in specific ways. The death of his wife and the suicide of his daughter are two plot details that aren't used nearly enough in the film. But there were others. Seeing Sinbad in this film was good because I haven't seen or heard of him in awhile. But the way the film progresses and the way Ty kept blowing him off each time Sinbad says he needs to talk to him made me suspect that Sinbad was God. Tell me that's not an example of art imitating life. People claim to be Christian but won't listen to the word to help them through difficult times. People that aren't spiritual won't accept help when they need it most. It would make sense especially when Ty mentioned to his boss that he talked to one of the guys putting up a camera (Sinbad) and his boss had no idea who Ty was talking about. As a matter of fact, Sinbad's character didn't interact with anyone else in the entire film if memory serves, only Ty. Not enough was done with this because Sinbad's dialogue at the end of the film to Ty was so weak and so ghetto that it was better off not being spoken. Basically nothing more than a rough "I tried to tell you." There could have been so much more there. There could have been so much more impact with the ending in general but it was so poorly written and shot that even though I understood it, it sucked compared to what it could have been.

For Ty to hold himself in such high regard, talking to Satan when he first enters the puzzle factory, it hinted at some really deep intellectual conversations about life, death, spirituality, the human condition etc, to come. But we don't get that in Crazy as Hell. The initial meeting of the two was good but it never really went anywhere afterward. Another missed opportunity because Ty admitted that he didn't believe in God. You'd think that Satan would have a field day with that even in simply conversation. Let's be real, this is SATAN we're talking about. He has the knowledge of eons at his fingertips. He wouldn't need theatrics and dance numbers to cause chaos (although Enriq killed it on the dance floor). Satan said one phrase in Spanish to the waitress working in commissary and that night her legs were wrapped around his head while she was screaming like there was no tomorrow. I really liked Enriq La Salle as Satan but in the second half of the film he just came off as a petty bully, not a master of the universe.

That's my problem with the film and the ending. The discussion of life, death, spirituality, human nature etc, are such that they can lead to many deep perspectives but the film foregoes this in the latter half to focus on cheap tricks. Ty goes to a BDSM bar, nothing comes of it. It was so inconsequential that it didn't even need to be in the film. Ty talks to the Spanish woman from commissary at the BDSM bar but does absolutely nothing with her except ask questions about Satan like a in-the-closet homosexual. Watching Satan have sex with the Spanish woman turned Ty on because he was caught wandering the puzzle factory's halls in his underwear with an erection afterward. He was even slack jawed, come on now, nothing was really done with that either. So much wasted potential. Pacino's monologue towards the end of Devil's Advocate is a perfect example of Satan done right at the when the protagonist (Keanu Reeves) finally realizes Pacino really IS Satan. There was nothing said by Satan in that scene that was wrong and Pacino delivered it masterfully. A clear indictment of the human race and the blatant, nonsensical contradictions of Christianity. Crazy As Hell never has that moment and that's just sad because I think Enriq La Salle could have really delivered if such a scene were written in the film.

3* Enriq La Salle is smooth, but the film ultimate ends up being disappointing.

Christopher H.Reviewed in the United States on April 15, 2020
3.0 out of 5 stars
I was expecting something more
Verified purchase
It was decent but, I had higher expectations. Not really psychological thriller. Just an egotistical Shrink who kept failing at every corner. Kinda reminds me of my mom before she lost her license to practice and her own company after getting hooked on her own patients meds then moved on to harder stuff. Sad really! She was good up until a certain point that she created and realized we already knew the "Real" her and what she had done to us kids and our Dad. She was a lying, manipulative thief and an adulterer. I did however learn a lot from her that benefitted me in almost every aspect. She put me in the psyche ward when I had Cancer because she thought I overdosed on all my meds but, I just dumped them out because I didn't like the way they made me feel and I stopped all treatments of Chemo too. I was 17 with a rare cancer that I beat on my my own terms and I was able too manipulate my way out of the psyche ward within less than a month. Transition takes time, so I slowly gave them what they wanted to see and hear. When I explained to her how I did it and the steps it took, the look on her face was priceless. She tried getting me put back in but, she failed miserably without any proof of my actions. Should have never been put in there in the 1st place but, she made me out to be a danger to myself and others. Sorry, you lost by underestimating me! That is the only mistake it takes for others too lose against me or anyone for that matter.
3 people found this helpful

Mr. CeeReviewed in the United States on June 6, 2019
5.0 out of 5 stars
Highly under rated.
Verified purchase
An excellent psychological film. The acting was superb and the twist ending totally unexpected. Eriq La Salle and Michael Beach, both excellent actors, and both sadly under used and under appreciated. Ronny Cox was also wonderful in his supporting role. One of those movies that makes one think about it, long after it was over.
5 people found this helpful

Eric D RidenourReviewed in the United States on May 13, 2020
5.0 out of 5 stars
It's Like that one Twilight Zone Episode....
Verified purchase
Would you take the tiniest chance (say 2%) that Hell is REAL? And that if you die in your sin you would end up there?

It is REAL & everyone that doesn't accept the loving salvation of Jesus Christ will end up there....
2 people found this helpful

joel wingReviewed in the United States on August 18, 2021
3.0 out of 5 stars
Eriq La Salle as the devil saved this movie
Verified purchase
I wasn’t impressed by the start of this movie which is about Michael Beach as a new hotshot psychiatrist going to work at a state facility for the mentally ill. Then Eriq La Salle showed up as the Devil. He was so laid back about his part I was interested in seeing where he would go. At first he’s a patient of Beach but then they have a battle of wills over the fate of the people at the institution. I also really liked the twisted ending. It really saved a mediocre beginning.

MichelleReviewed in the United States on May 23, 2020
5.0 out of 5 stars
This is going to be watched again in a few years, just to see what I missed.
Verified purchase
Although the storyline and crux of this movie is easily figured out, it is compelling and very well acted, organized, directed, developed and well, pretty much a whole package. I loved the characters, the development and interactions. Well written and screened. Thank you all for sharing your art with me.
2 people found this helpful

Richard JensenReviewed in the United States on April 22, 2020
4.0 out of 5 stars
Good acting and better than expected
Verified purchase
It's hard to say anything specific without spoilers, but this is a very well-acted (by some name actors) story. I didn't think that the ending was any surprise. In fact, it seemed inevitable early on in the film. But the story is so well-told that even if you see where it's leading it's a worthwhile exploration. This is better than much of what's on Prime.
One person found this helpful

CarrieReviewed in the United States on February 14, 2018
5.0 out of 5 stars
This movie is amazing.
Verified purchase
This movie is amazing. I am a Christian and my music minister recommended this to me. We talk about how being a “good person” can not getting you into heaven, and this movie portrayed that completely. The acting was hilarious. I laughed majority of the movie. The chilling music makes your skin crawl. I really enjoyed it.
4 people found this helpful
See all reviews
Back to top
Get to Know Us
Make Money with Us
Amazon Payment Products
Let Us Help You
EnglishChoose a language for shopping. United StatesChoose a country/region for shopping.
© 1996-2021, Amazon.com, Inc. or its affiliates