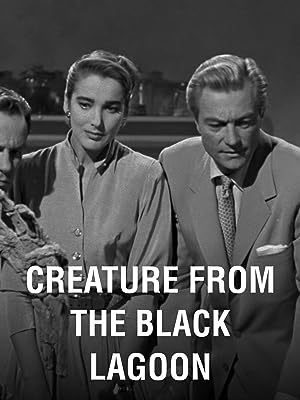 Creature From the Black Lagoon

(4,340)
7.01 h 19 min1954G
A scientific expedition searching for fossils along the Amazon River discover a prehistoric monster in the legendary Black Lagoon. The explorers capture the mysterious creature, but it breaks free and returns to kidnap a scientist’s beautiful lab assistant.

Carl P.Reviewed in the United States on August 29, 2018
1.0 out of 5 stars
DO NOT BUY THIS FOR REVENGE IN 3D. IT'S NOT
Verified purchase
Well done Universal. You've managed to piss off the vast majority of people who bought this bait and switch cash grab. We all know good and well that the team at 3D film Archive did not give you restored side by sides as a finished product. They sent you a digitally restored 3D blu ray master and instead of giving us that, you released a piece of garbage in side by side format. SIDE BY SIDE FORMAT?!?!?!?! Who in the hell ever did that to begin with and ever will again? What were you thinking? You just wanted all of us to pay another $30 dollars because you couldn't be bothered to come off an additional .50 cents for a blank 3D blu ray. I'm sending it back as defective. You have cleverly managed to side step false advertising but you certainly fooled us fans. No. You can't have my money. Release Revenge of the Creature in the format 3D Film Archive provided.

Bruce BertrandReviewed in the United States on August 29, 2018
2.0 out of 5 stars
Universal diminishes a meticulous 3D restoration with side-by-side format!
Verified purchase
After all the painstaking work 3D film Archive did to produce a 4K 3D master of "Revenge of the Creature", Universal chose to save a few pennies to avoid a third disk by using the single stream side-by-side 3D method, effectively cutting the resolution in half! It's probably safe to assume that other fans like myself would have been happy to pay that extra pittance toward Universal's corporate welfare for a third disk with the standard dual-stream 3D. Now, I think they should compensate us with a third properly formatted disk free of charge! I would like to give this an even lower rating except for the fact that so much good work went into the original restorations, which need to be recognized!
84 people found this helpful

L. R. FenstermakerReviewed in the United States on August 29, 2018
3.0 out of 5 stars
Botched 3D *UPDATE*
Verified purchase
The 3D for Revenge of the Creature isn't working on the new Legacy Collection, and the picture quality for the 2D presentation isn't on par with the other movies. I'm seeing many complaints online, so I know it's not just my setup. Very disappointing!

Note: I see another reviewer was successful in using a side-by-side setting. I also saw someone online had some success with a 3D button on his remote. I don't have a 3D button on my remote, and my settings for 3D are frozen with the disc in. I can set it to side-by-side when the disc is out, but once it goes in, it reverts to normal and won't allow changes.

Update: So I received my replacement disc. 3D is now watchable, but I've read online that the images appear to be different, one having some noise reduction applied and the other left alone. I took a look, and there does appear to be a difference. Perhaps this was done for some purpose though. What is absolutely clear is that the 2D version looks soft and nowhere near as detailed as the Creature Walks Among Us. I don't have any of the other releases for Revenge, but I've read that the French release looks much better, albeit with a 1.33:1 aspect ratio. This still seems like a bit of a botch job to me, but I did give it a couple of extra stars for having Revenge in playable 3D and the other two movies looking good in 2D.

The YellowReviewed in the United States on August 29, 2018
1.0 out of 5 stars
Authoring issue on Revenge of the Creature! WAIT FOR REPLACEMENT TO BE ISSUED
Verified purchase
This was arguably my most anticipated release of the year. Needless to say, I was really disappointed to discover that the folks over at Universal Home Entertainment botched this epic release due to, what is seemingly, a cost cutting decision. They made this a 2 disc set, putting the original on one disc, and Revenge and Walks Among Us on the other. In order to fit both films, and the 3D presentation on a single disc, it seems Universal chose to go with a lower res version of the 2D presentation for Revenge, and an inferior split screen presentation of the 3D version.

This is such a shame, too. The 3D master was done by the great 3-D Film Archive, and based on their previous work, I'm sure the release as they meant it to be would have been second to none.

For anyone on the fence about picking this up HOLD OFF ON A PURCHASE until universal chimes in about a replacement program. Mistakes happen, but again, this seems more like a cost saving technique to me. Hopefully we will get more clarification in the coming days.
58 people found this helpful

Luke H.Reviewed in the United States on August 29, 2018
5.0 out of 5 stars
Universal Corrected Their Mistake
Verified purchase
Update:
Universal did the right thing and issued replacement copies of the 2nd disc, which now include a proper MVC 3D encode of Revenge of the Creature. Maybe the SBS encode on the previous version was an honest mistake. Who knows? The movie does look a bit soft in some places, but apparently that's due to the original film, and not a result of disc authoring/compression. I can definitely recommend this set now that it contains the corrected disc and I hope that Universal will continue to release more 3D Blu-rays (both new and from their back catalog) in the future.

Original Review:
I don't think I've ever been so disappointed with a movie set before or so disgusted with the publisher. I'm going to have to think twice before I pre-order anything from Universal again.

Many people, like myself, already own the standalone release of Creature from the Black Lagoon on Blu-Ray, with a proper MVC encoded 3D version of the movie. The Legacy Collection contains a re-issue of that same disc along with a second disc that was touted as containing Revenge of the Creature + a 3D version of that film, and the third and final the Creature Walks Among Us film. If that seems like a lot of movie for one disc to you, you're not wrong. So much in fact that Universal couldn't fit a proper 3D version of Revenge of the Creature on it. Instead they put some low resolution split-screen garbage on the disc in lieu of a proper MVC 3D encode. If you're lucky then maybe your TV or Blu-Ray player can convert it into some blurry low-fi version of an actual 3D Blu-Ray movie. Worse still, it seems they used over-aggressive compression on the 2D version of Revenge of the Creature, in order make it fit, so neither version of the film is of acceptable quality. I might expect this sort of thing if I had ordered a movie set from Sri Lanka, but certainly not in a US release from Universal.

The 3D Film Archive (the best in the business) did a 4K 3D restoration of this movie for Universal. Many of us have been awaiting a proper 3D release of Revenge of the Creature for years, and were super excited for this release after finding out they had done the restoration. Sadly, this release is so botched it hasn't given us any chance to see the fruits of their labor. We still don't have a proper 3D release of release of Revenge of the Creature, and the only adequate disc in this collection is the one I already owned. What a disappointment!

Would it have killed Universal to make this a proper 3 disc collection in order to do it right instead of cutting so many corners? Actually, there are move collections with 3 times as many Blu-Ray discs for less than half of what I paid to pre-order this thing, so no, it wouldn't have.

It's sad to see Universal give such poor treatment to a "Legacy Collection" and sadder still to see such a breach of trust with customers and fans who already owned the first disc in the collection and were expecting something at least on par with that release for the other movies.

I'll gladly revise this review if Universal decide to do the right thing and give a proper MVC 3D encoded Blu-ray to people who purchased this, but I'm guessing this was not a mistake, just an ill-conceived cost-cutting measure. The ball is in their court now. We'll see what they do.
39 people found this helpful

Ran RanReviewed in the United States on December 8, 2018
5.0 out of 5 stars
Replacement has been received for Blu-ray 3D of Revenge of the creature, directly from Universal.
Verified purchase
These movies are fun to watch. Now that Universal has corrected the flaw in the Blu-ray 3D of REVENGE of the creature, everything is just awesome! Universal sent me the replacement disc over a month ago but, that shipment never made it to my house because it accidentally got returned to them. After that I figured I wouldn't be getting a replacement. However, after I told them what happened, they sent me another one! Surely they will eventually start selling the corrected versions on Amazon soon? I'm a very happy customer! it was Awesome of universal to fix the problem.
33 people found this helpful

EcformeReviewed in the United States on September 2, 2018
1.0 out of 5 stars
A major disappointment. Botched discs!
Verified purchase
Universal badly botched the authoring on the second disc. The restored 3D that was my reason for purchasing this set in the first place has been rendered as two side by side images. Neither film on the second disc is true 1080p. Very disappointing. I’m returning my set to Amazon. I hope Universal reauthors and represses this set. If not, I’ll make due with my old DVDs.
13 people found this helpful

SAM33Reviewed in the United States on August 31, 2018
1.0 out of 5 stars
A BIG Disappointment
Verified purchase
I am a huge Universal Monster fan and a major film collector with a dedicated home theatre. Also a big 3D enthusiast.
I have been waiting for this for literally over a year.

I know for a fact that a very fine restoration was done on REVENGE in 3D, but Universal decided to release it here in side by side rather than proper full resolution 3D.

AND, even if you don't have or like 3D, this means that the "flat" feature is in less-than-full 1080p resolution. It looks soft on larger TV's.

CREATURE is fine, just a re-issue of the previous 3D blu ray release, and WALKS AMONG US is OK, but most of us want this new set for REVENGE, and sadly I can't recommend this due to the mis-handling of that title.

Universal has put out one really excellent vintage 3Dblu ray (IT CAME FROM OUTER SPACE), but this is a very sad mistake.
11 people found this helpful
See all reviews
Back to top
Get to Know Us
Make Money with Us
Amazon Payment Products
Let Us Help You
EnglishChoose a language for shopping. United StatesChoose a country/region for shopping.
© 1996-2021, Amazon.com, Inc. or its affiliates