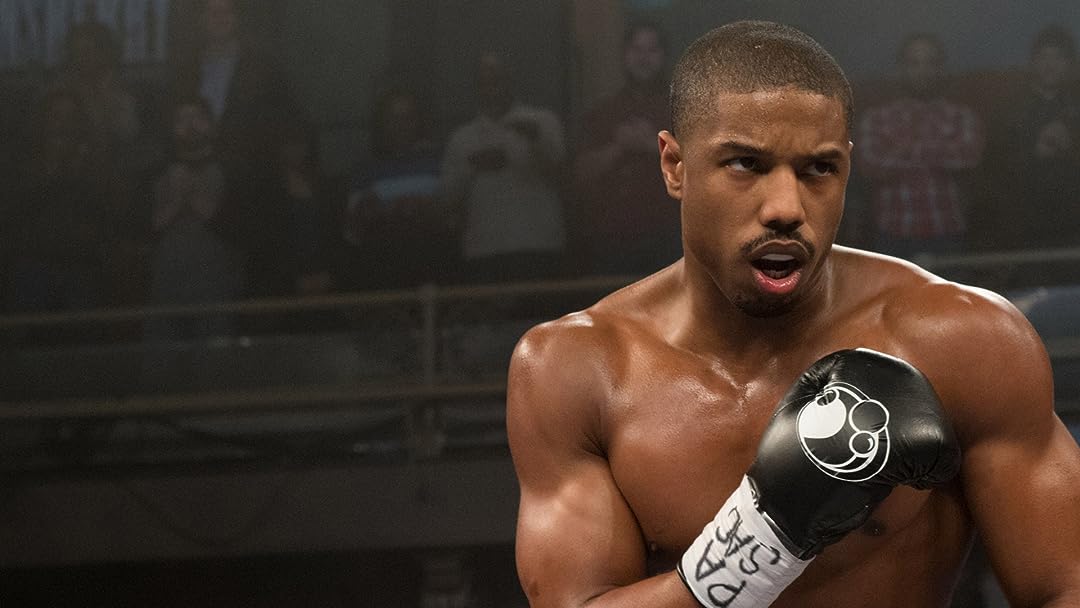 (29,156)7.62 h 13 min2015X-RayPG-13
Adonis Johnson never knew his famous father, world heavyweight champion Apollo Creed, who died before he was born. Still, there's no denying that boxing is in his blood, so Adonis heads to Philadelphia, the site of Apollo Creed's legendary match with a tough upstart named Rocky Balboa. Once in a City of Brotherly Love, Adonis tracks Rocky down and asks him to be his trainer.

Wathan48Reviewed in the United States on April 20, 2016
5.0 out of 5 stars
WOW!!!
Verified purchase
WOW, WOW, WOW!!! This is probably one of my favorite movies to come out within the last few years. For those that haven't seen the movie yet, I will refrain from being a spoiler.

I'm not going to lie, I've never been a huge Rocky fan. I think it has more to do with the age of the movie rather than substance, but I had seen enough to know what was going on in this movie.

Young Creed really resonated with me because like him, I've had to claw and scratch for everything in my life. This movie teaches you about perseverance, toughness, love, friendship, family and honor. By the end of the movie, you'll be moved to tears (even you big guy).

This movie is definitely not for small kids due to language and violence, but still a great movie.

BlisSwoleReviewed in the United States on November 18, 2018
5.0 out of 5 stars
CREEDS HIDDEN AGENDA
Verified purchase
Listen up, CREED is a great movie. You think it’s predictable? You think it’s formulamatic? I don’t think so BRO. This movie will subvert ya expectations. Believe me, I didn’t know going into this, that it would literally teach me how to be the best boxer within my squad. Watch this movie and you’ll be able to beat the heck out of that bully who keeps making you pay rent in your momma’s basement.

Real talk, Creed is a movie about fightin’. If you want watch this movie without fighting someone directly afterwards, then you gotta drop down and give me 500 push-ups. Cause CREED will pump you up and you’ll rage in the gym, like I do everyday.

10/10 watching this movie AS I WRITE THIS, BRO
45 people found this helpful

Al GreenReviewed in the United States on February 20, 2018
5.0 out of 5 stars
CREED IS KING!!
Verified purchase
Never had a desire to see this film. Shame on me. Its 3AM in the morning and I could not get to sleep so i clicked on it. God truly blessed this movie with all the right elements. Stallone wins you over by being, well by being Rocky. How can you not love him. The director Cooglar is a genius, period, end of story! Jordan plays the lead to perfection and Tessa Thompson adds just the right touch as his girlfriend. This film is truly a treat and will touch the heart of not only boxing fans but anyone who is a fan of life.
This is by far one of the best Rocky movies ever made.
BRAVO!!
45 people found this helpful

MattReviewed in the United States on October 4, 2017
5.0 out of 5 stars
Amazing Film Just WOW
Verified purchase
Phenominal film. I always stay away from boxing movies just like basketball movies but damn was I surprised. I love film and all the parts that go into making a GOOD film that viewers will intellectually enjoy. Stalone got the writing, directing, camera angles, pov motion shots, and the story line just so perfect while starring a Black Male as the lead without people calling this a "black" movie. This was fantastic execution. I applaud all involved and recommend this to anyone who wants to reach their goals. If you're lazy af then keep moving, this film will be lost on you.
34 people found this helpful

Ervin GriffinReviewed in the United States on January 2, 2019
4.0 out of 5 stars
Great Entry To The Rocky Franchise
Verified purchase
I actually got this as a gift for a co-worker. He's not a Rocky fan per se but I knew he liked the work of Ryan Coogler so I got him this and he LOVED it!

As for my thoughts on this, I was not crazy when I first heard of this film being made as I thought the previous entry "Rocky Balboa" was a great ending to Rocky's saga. But then I read what it was going to be about and it was about the Creed family so I was willing to give it a chance! So glad I did!

Not sure how I feel about having Adonis Creed being an illegitimate child of Apollo though. While I personally wouldn't have wrote it that way, this was only touched upon briefly (thank goodness)! It did focus on something that is a problem in America in general and the African-American community in particular and that is in the absence of fathers (though in Apollo's case, you can't help being dead as that is what happened to him in Rocky IV).

The way Adonis' struggles are shown was very well done. I also liked how they kept Rocky to a minimum though his role was very significant as well. The cast assembled for this film was near perfect and I do like how they bridged the gap between generations.

Overall, even if you aren't a Rocky fan, this is still a good movie to view! Boxing is the backdrop but the main focus in on the human spirit! Recommended!
13 people found this helpful

CariReviewed in the United States on June 4, 2017
5.0 out of 5 stars
Just like old times!
Verified purchase
What great fun! The Rocky series was something different for everyone that enjoyed it. Everyone has their own favorite title bout and many a conversation gets started over which was your favorite Rocky movie. This one held true, great show. "Now that's what I'm talkin' about" Priceless!
32 people found this helpful

Carlos and LindseyReviewed in the United States on December 3, 2016
5.0 out of 5 stars
Excellent no matter which audience you come from, and a step above for a continuation of the original series
Verified purchase
Packed with nostalgia, updated with contemporary social values and modern directing styles, acted superbly by everyone, beautiful action shots, excellent soundtrack, this film immerses you into the feeling one can only get when immersed in a Rocky film. It feels raw, and it feels real, but does not denigrate the sometimes ludicrous scenarios that took place in the previous films; it honors them. It's an homage for those who want it to be an homage, and yet it stands alone as an excellent film and story.

For me, it was as if we took the first Rocky film, and he training with Mickey, but we don't actually know there were five films in the 50s that follow Mickey's boxing career. You can introduce a whole new audience and generation to that FEELING, and that's amazing. Characterization is on par, storytelling is on par, and in its own way, it does rise above the source material, but maybe I feel that way because I didn't watch the source material until I was an adult, and I missed out on the childhood nostalgia of the films from my generation. In that way, it feels dated, so the way this is acted and shot it feels fresher. One shouldn't equate that with better. I don't feel it's divisive in that way, setting out to anger the original audience.

It's a an absolutely great film, regardless of which audience you come from. It will please everyone. In that, it may seem almost "bland" to some because it doesn't take risks in any one direction. However, I don't think that's what this project set out to do. I'm sure I don't make any sense, I'm just rambling. I don't really know what I'm talking about, but I really enjoyed this.
17 people found this helpful

Anna PerezReviewed in the United States on February 8, 2020
1.0 out of 5 stars
Sylvester Rules! Michael B Jordan? Just an angry man
Verified purchase
Painful to watch! And not because of the fighting. Michael B. Jordan as Adonis Creed has no heart. Not once did he do a single selfless act to allow the audience to want to route for him. His character never evolves....he remains angry, impulsive, prideful, self righteous, and entitled.
He throws Mary Ann Creed's love and support back in her face and never reconciles with her...she, however, proves to be selfless to the end when she encourages him to create his own legacy and gives him Apollo's boxing shorts.
He imposes himself on Rocky to train him by using his relationship with Apollo to make Rocky feel "obligated".....Adonis literally tells Rocky that he "owes" him. Adonis later denies Rocky the right to live out what little time he has left to live on his own terms and forces Rocky to go through chemotherapy and all of the misery that goes with it......yeah, what a tool.
If that wasn't enough to be thoroughly disgusted by Michael B Jordan's character, he starts a fight, literally knocks out, his girlfriend's music promotor (because he didn't like being called "Baby Creed") right before she was to go on stage. He never thinks about anybody but himself in the moment.
I was really looking forward to watching what I thought would be an uplifting story (reminiscent of the spirit of Rocky) at the end of my workweek with my kids, instead I found myself routing for Pretty Ricky Conley to win the fight.
5 people found this helpful
See all reviews
Back to top
Get to Know Us
Make Money with Us
Amazon Payment Products
Let Us Help You
EnglishChoose a language for shopping. United StatesChoose a country/region for shopping.
© 1996-2021, Amazon.com, Inc. or its affiliates