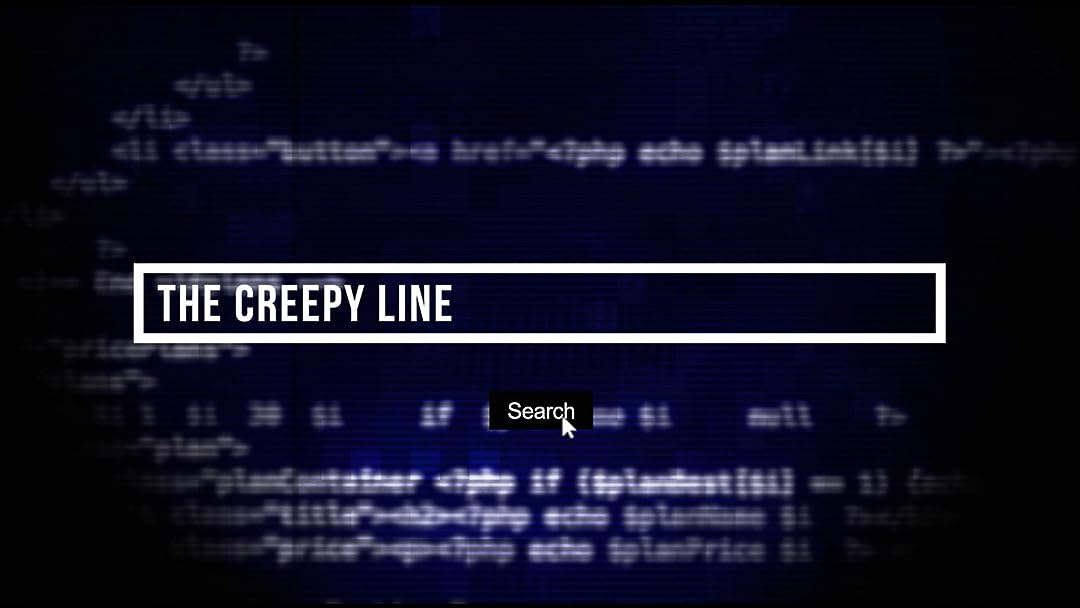 (521)
6.91 h 20 min20187+
The Creepy Line reveals the stunning degree to which society is manipulated by Google and Facebook and blows the lid off the remarkably subtle - hence powerful - manner in which they do it. Offering first-hand accounts, scientific experiments and detailed analysis, the film examines what is at risk when these tech titans have free reign to utilize the public's most private and personal data.

JorgeReviewed in the United States on November 24, 2018
1.0 out of 5 stars
How Ironic...
Verified purchase
A "documentary" exposing what tech companies aren't telling us by filmmakers funded by the same conservative organization behind the documentary 'Clinton Cash' - please note that I am using 'documentary' and 'exposing' while stifling the urge to giggle uncontrollably. Now I'm not denying that some modicum of information in either of these <cough> documentaries may be true but, for pities sake! Did not those same conservative nominate a pillager who was also made rich by foreign investments? I think this quote says it all:

Fitness CelebrityReviewed in the United States on October 5, 2018
5.0 out of 5 stars
You're not paying for Google and Facebook -- YOU'RE the product.
This film, which I saw at a screening before its general release on Amazon, is very scary but eye-opening and engrossing. At about 78 minutes long, it's a solid investment of your time to learn just how much leverage, control, and influence these two massive platforms have over you.

For all of us, it's tough to admit how much we're slaves to our devices and all these "free services." Privacy and cyber-security advocates have been warning about it for years, and I know I'm not the only one who scoffed and said I knew what I was doing. Really, though, I just didn't know what THEY were doing. "The Creepy Line" picks up from there.

Google started with a great idea -- to build the best search engine. Then they realized how much more money they could make by leveraging that search engine. And leveraging again, and so forth. They've "disrupted" many different businesses right out of existence. But hey! It's FREE!!!

Facebook started as a way to meet girls. A simple way to connect friends and introduce mutual friends and expand your social horizons. But the only way ideas like this make money is by "monetizing eyeballs" and building up a more detailed profile of people to offer to advertisers. MySpace and many others were based on the same idea.

I spent many years in the digital news business. And I can tell you that the holy grail for publishers is selling "behavioral targeting" to their advertisers. It's why you see ads on news sites for those products you were JUST looking at on Amazon moments ago. All of the information Facebook and Google are collecting about you, every bit of it, is so they can add you to their own behavioral target groups that they sell to advertisers. That is what has made the largest fortunes on the planet.

The Creepy Line tells one shocking story of how Facebook experimented on a sample of its users, deliberately filling their newsfeeds with depressing, bad news. They did this just to see what it would do to those users. Would they post that they were depressed? Would they shop for products to make them happier? And, most crucially to Facebook, would they reduce the amount of time they spent on... Facebook? It's dark, cynical stuff. And it was ALL done just to figure out how to sell you to advertisers.

Somewhere along the line, both these companies decided to go down an even scarier, creepier path. Now, they want to influence how you think, who you vote for, what opinions will be placed in front of you. What news they will "up-rank" to show you.

I don't believe in government regulation of private companies, and The Creepy Line doesn't advocate this. I certainly don't want the government infringing on free speech. But Google in particular is so deeply entwined in our lives at every level that I am now conscious of, and deeply resent.

So, my advice is to watch this film. Don't use Google's search engine. Don't use Chrome. Don't sign in to their services. Don't trust them with the details of your digital life, and delete what you can. (To their credit, Google makes this easy, but I'm still not sure if I've really deleted it, or am just being conned into thinking it has been).

Google's power and their arrogance is based on everyone using their search engine, their browser, their email, their phones, their tablets, their apps. They monitor every bit of it. If all of that were still just to show me more relevant ads, I could perhaps get past it. But to see how much more ambitious they are than just that makes me worry. A lot.

TopspinReviewed in the United States on October 28, 2018
1.0 out of 5 stars
People living in glass houses shouldn't throw stones
Verified purchase
The film makers use the same techniques in the film that they criticize Google and Facebook for using. They take good research and twist it to their own benefit. About halfway through the film it becomes obvious what they are trying to do and why they are doing it. They might at least be honest in the opening so people don't have to waste their time.
94 people found this helpful

AnonymiceReviewed in the United States on October 25, 2018
3.0 out of 5 stars
Good Info for the Clueless but Biased, not in a Good Way
Verified purchase
Conservative/libertarian bias but some valid points, until they thinly unveil their agenda (and they didn't mention the huge personal data sale from Facebook to a right wing PAC, before the 2016 election, oh no, then it would have really been a doc!). None of this is news and if you use Google (there are non-logging alternatives like DuckDuckGo), Chrome, allow cookies and tracking everywhere, Android phones without caution, or you only get your news from Facebook or Google, then you deserve what you get. People have to start taking their own privacy seriously and not just staring into Facebook on their phones all day. Least of all getting news from there. This film was mostly about Google, and at first seems a doc on them and their rise. Little about Facebook and nothing about any right wing breaches that have been advantageous. All sides a guilty of trying to use these historically great political tools. Good points at the end about accountability, how we are for sale, and the need for some controls (conservatives advocating more gov? But that's how things are these days.)
69 people found this helpful

David McKenzie JrReviewed in the United States on October 6, 2018
5.0 out of 5 stars
Exposing the metadata monopolies.
Verified purchase
Excellent documentary detailing the scope Google and Facebook have in controlling how we find information, how we use information and how we share information. This is a learning experience on how powerful an information algorithm can be in shaping the world and how it can be disguised into fooling people into a confirmation bias. Everything from buying a toaster to political elections can and will be manipulated using technology right now in today's world. This movie is a must watch. These information monopolies must be split up. Regulations will only give the government this power. The scope of the information collected is way too broad to have under one roof.
99 people found this helpful

MPGReviewed in the United States on October 6, 2018
5.0 out of 5 stars
Very informative
Verified purchase
It was an extremely well written and very informative documentary of an extremely frightening issue. What makes it worse is that we give consent for facebook and Google to do this. I highly recommend that everyone watch this and to wake up to what's going on.
91 people found this helpful

Arameh AvanesianReviewed in the United States on November 5, 2018
1.0 out of 5 stars
Super biased and typical fear mongering. No solutions, too mant logical fallacies.
Verified purchase
Such irony.....this whole documentary is biased. If you read a book, that book will have a huge impact on your opinions and beliefs. That is the point! If you use google to research, what you type in the search bar matters. The power is at your fingertips. Never settle on information from one source. If you watch the news, listen to the radio, or read a newspaper, they all serve the same purpose. They are designed for people to draw the conclusions that they (source of info) want you to. Most importantly, the people that fear technology are never willing to learn or be accountable. You can search annonymously, you can clear cookies and browsing history. You can choose what you search instead of going with suggested searches.
55 people found this helpful

DolemiteReviewed in the United States on November 15, 2018
5.0 out of 5 stars
"King Makers", manipulation, and unchecked power.
Verified purchase
The movie wasn't about conservative vs liberal at all.. They frame this on a world stage outside of just American politics; it's about "king makers", the fact that these companies have even intertwined themselves into government data systems, and the unchecked power they have.

People who say this is conservative propaganda missed the part where Dr. Robert Epstein, Senior Research Psychologist at the American Institute for Behavioral Research, a major contributor in this movie, a democrat who states that he voted for Hillary Clinton, suggesting that manipulation may have helped put Trump in office. Jordan Peterson, the other major contributor, identifies very openly as a "classic liberal"; just because some of his views don't always line up with the PC culture does not mean he is a conservative or republican.
52 people found this helpful
See all reviews
Back to top
Get to Know Us
Make Money with Us
Amazon Payment Products
Let Us Help You
EnglishChoose a language for shopping. United StatesChoose a country/region for shopping.
© 1996-2022, Amazon.com, Inc. or its affiliates