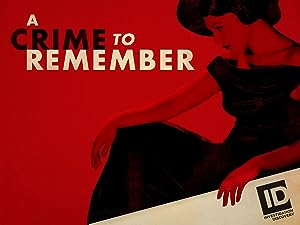 A Crime to Remember

(106)8.32013TV-14
Fashions may change but murder never goes out of style. A Crime To Remember showcases the most compelling crimes of yesteryear, when secrets festered, passions ran wild and cops had nothing but shoe-leather and gut instinct to catch a killer.

idiot's delightReviewed in the United States on April 25, 2014
4.0 out of 5 stars
Revisiting news breaking crimes of the 1950s and 60s
Verified purchase
The episodes of this series were headlines of crimes 50/60 years ago.
Time Bomb, 1955, a Seattle bound plane explodes over Colorado
Judge, Jury, Executioner, 1955, Florida judge and his wife disappear, and blood splatters are found outside their house.
Career Girl Murders, 1963, two young women are viciously murdered in their upper East-Side NYC apartment
A New Kind of Monster, 1967, Eastern Michigan State female students are being disappearing and found murdered
Go Ask Alice, 1965, two children disappear from their Queens, NY apartment, and later found strangled
Who Killed Mr. Woodward, 1955, One of New York City's social elite, William Woodward is killed by his wife, but everyone is wondering if it was intentional.

This series is one of the better productions of Investigation Discovery, using actors to retell the events leading up to the crimes committed.

The saddest one for me, was Who Killed Mr. Woodward, the story of a social climbing adventurer, who married into New York high society and is snubbed by the mother-in-law. The husband is intrigued at first, but as Ann tries to fit in the social circle, the husband treats her badly. Even their children would (but not mentioned in the episode) come to tragic conclusions.

M. JamesReviewed in the United States on November 13, 2015
5.0 out of 5 stars
Fantastric and meticulous, each episode is a true work of art.
Verified purchase
This is an amazing series. Like Dateline but the stories are from 40 or 50 years ago. This series does a GREAT job in reproducing the distant time period. I haven't caught a mistake yet and I'm pretty eagle-eyed. It's hard to imagine we all lived like that once without being in constant communication via smart phone or computer or tablet. It seemed normal at the time and we were much happier NOT knowing every single horrific detail of every single event happening around the world. And people weren't constantly sharing their every boring thought and emotion with everyone either. And crimes were much harder to solve! But they did it (usually). See life before the Miranda Warning. And to the producers of this series - kudos! You do incredible work.

V. KleinmanReviewed in the United States on July 5, 2016
5.0 out of 5 stars
One of the best series of shows I have seen. You will get hooked!
Verified purchase
I absolutely love this show. They show pictures of the actual people involved in the crime... and the actors and actresses look almost identical to the real life people. This series is remarkable in which each episode tells of a true crime - from the ashtrays to the clothing being worn, to the cars being driven and especially how the police and the newspaper reporters worked right next to the detectives while they snapped photographs. Everything in this show has been spot on. Try one show and you will be drawn in like you were there.... and you will be hooked!

ReaderReviewed in the United States on February 10, 2016
5.0 out of 5 stars
THE BEST show of this genre I've ever seen!
Verified purchase
I watch a ton of these true-crime shows & this one is, by far, THE BEST I've ever seen. The acting is excellent, the narration appropriate (not overly-dramatic, like some of these shows), & the stories are fascinating. Sometimes, with many of these shows, I find myself falling asleep or my mind drifting away from the boring way in which the story is presented. Definitely not with this show. The stories unfold like a movie or an episode of a great series, with the plot building until the very end. Another thing I really like about this show is the way they show you what the actual characters looked like, at the very end. They also do a fantastic job with costumes & set-design. I can't wait until the next season comes out!

ChrisReviewed in the United States on February 20, 2014
5.0 out of 5 stars
Beyond ready for Season 2!
Verified purchase
I'll admit, I watched the trailor for this series before deciding to purchase it. I have found with 99% of true crime shows that their reenactments can almost take away from a story. So when I watched the trailor, what I actually got was the first 2 minutes of the first episode and when it took me back to the purchase options I jumped at the chance! You feel time warped into the era of when the crime happened, and has you feeling more emotionally involved. I was doing more research on the true crimes portrayed on this series than I have after watching anything else. You won't regret this, I highly recommend it to anyone who loves true crime series!
2 people found this helpful

CocoxoReviewed in the United States on March 13, 2017
5.0 out of 5 stars
Mad Men meets True Crime
Verified purchase
This is the murderino version of Mad Men. (A murderino is a true crime obsessive fyi.) Anyway, A Crime to Remember is has a super high production value and the whole vibe is so gorgeous and nostalgic. In Season 1, Go Ask Alice is the best episode by far and has the feel of a feature length movie. Love it.
One person found this helpful

B.B.Reviewed in the United States on March 21, 2016
5.0 out of 5 stars
Quality story telling
Verified purchase
Every episode of A Crime to Remember is presented as if someone who was around back then is telling the story. It is much better acted/filmed than other I.D. shows. Now don't get me wrong, I love my trashy I.D. shows as well (Deadly Women, I'm looking at you), but this is enjoyable at another level and just feels really well done.

PenneilmomReviewed in the United States on November 12, 2016
5.0 out of 5 stars
A great period true crime series!
Verified purchase
I love this series! The period feel to it is perfect and they also evaluate the cases with new perspectives now that the sensationalism has gone away. Well done, ID!
See all reviews
Back to top
Get to Know Us
Make Money with Us
Amazon Payment Products
Let Us Help You
EnglishChoose a language for shopping. United StatesChoose a country/region for shopping.
© 1996-2021, Amazon.com, Inc. or its affiliates