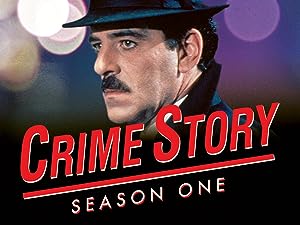 (39)
8.31987NR
In 1960s Chicago, Lt. Mike Torello and the members of his Major Crime Unit carry on a near-epic battle against organized crime figures such as Ray Luca.

armlabesReviewed in the United States on March 27, 2012
1.0 out of 5 stars
A little forewarning...
Verified purchase
There are a number of DVD versions of Crime Story to choose from. This review (or non-review) refers specifically to the version produced overseas entitled Crime Story Series One released by Boulevard Entertainment. The DVD's are advertised as "NTSC Region 0. Will play worldwide." on Amazon and on the box itself. As I am in the U.S. where NTSC is still the standard, I decided to do a bit of research to find out about Region 0 discs. In theory, anyway, an NTSC Region 0 DVD should indeed work in any Region 1 NTSC player. How this plays out (or doesn't, if you'll excuse the poor humor), though, is what this warning is about.

I own both a Panasonic DMR-EZ17, and more recently, a Panasonic DMP-BDT210 Blu-ray player. These discs will not work in either player. Both give simple message "Cannot play." I gave Panasonic a call on this and the best that they could offer is that the manuals do not specifically state that Region 0 discs will play. While I didn't find this all that helpful, it certainly does let Panasonic off the hook, as they are not obligated to try to find out why a disc which they have not claimed will work, won't. (It should probably also be noted that the BDT210, which is an outstanding blu-ray player, hasn't had a single issue with any region free blu-ray discs, of which I own quite a few.) I also emailed Boulevard Entertainment on this problem, but as of this date, have not received a response of any kind.

Interestingly, the discs work just fine on my computer. Unfortunately, playback on a small computer screen is not why I purchased the set. In short, I suppose that what I want to say is that an advertisement which says that a disc will work worldwide (which I presumed to mean in any region locked player) does not necessarily mean that it will. The set will go back to the retailer. I hope to save any would be purchasers a bit of time and pain (though your own results, as they say, may differ).

I'm also interested in any thoughts (or info) which anyone may have on what I might've missed in determining to purchasing this item. Thanks much.

santa cruz womanReviewed in the United States on April 20, 2019
5.0 out of 5 stars
lie down with cobras get up with bites
able i was a year out of hs in 63 and the cars bring back fond memothe beautiful images deserve the best. the vivid neon made me feel as if i were in vegasries. the mix of grim drama and bizarre humor in the characters of frank and luca's wife work well. i was going to m buy the dvd but reviews on the first mentioned poor pic quality and the 50 one was reviewed as missing much of the music. the background music, very well chosen is a big part of the appeal so best buy the prime offering which had it. joseph wise,man is especially good as the old crime lord.

David HallmonReviewed in the United States on February 18, 2019
5.0 out of 5 stars
Don’t cross Mike Torello! He’ll kill anyone you have ever loved. Your mother, your father, your dog!
How is this gritty cop show set in 1960s Chicago not on everyone’s top cop/crime/drama shows of all time is beyond me. It also has one of the best pilots ever. It could be a stand alone movie all itself. I’m so glad this show has fo ally made it to Prime. It’s been 20 years since I’ve seen it live and it has had a lasting impression on me since then. I just finished the pilot and will enjoy the next month as I make my way through the rest of this amazing series. Michael Mann’s finest.

JJReviewed in the United States on March 25, 2016
5.0 out of 5 stars
Good FBI show.
This one of the great FBI stories! The characters are really believe able and right to the time period. A little on the bloody and physical order. I really like this show. I watched on Network when it came out, I have rented the DVD/'s twice and now I am going to watch it again on Streaming. This is rated a PG14 show.
5 people found this helpful

Rock HoundReviewed in the United States on March 15, 2021
5.0 out of 5 stars
EACH BROADCAST SHINES--MICHAEL MANN STILL GREAT WITH 'ALI' FLICK
THE FIRST SEASON -- THIS ONE -- IS WELL-PLOTTED AND ULTRA-VIOLENT FOR 1986-7 TELL-A-VISIOB
NEXT SEASON VERGES ON SURREALISM AT TIMES
TOGETHER, THIS CRIMME SERIES DELIVERS A
KNOCK-OUT MOST EPISODES
JUST AS DOES 'ALI' WITH WILL SMITH AND A FEW ACTORS
STILL ACTING SINCE THEIR CRIME STORY DAYS
See all reviews
Back to top
Get to Know Us
Make Money with Us
Amazon Payment Products
Let Us Help You
EnglishChoose a language for shopping. United StatesChoose a country/region for shopping.
© 1996-2022, Amazon.com, Inc. or its affiliates