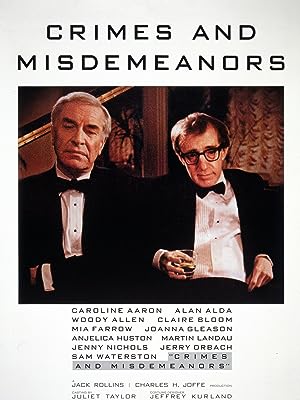 Dr. Robert F. KnollReviewed in the United States on June 26, 2014
5.0 out of 5 stars
Vintage Woody: God, Are You Out There?
Verified purchase
If you had the opportunity to rid yourself of an extremely annoying person who threatens your entire comfortable existence and emerge scot free, would you take it? Would you film a positive spin on a pompous ass of a media maven if that was the only way to secure much needed funding to finish your own heartfelt documentary about a philosopher's quest for meaning in life? Woody Allen poses such engrossing questions in his pitch black comedy of upper middle class manners, "Crimes and Misdemeanors", his 25 year old masterpiece now available for the first time in a limited Twilight Time Blu-ray.
Woody has been nominated 16 times for screenplay Oscars, and has won three: for "Annie Hall"(1977), "Hannah and Her Sisters"(1986) and "Midnight in Paris"(2011). Even in such celebrated company, "Crimes" stands out as the most penetrating and well knit of his New York based films as he explores the moral choices that define who his characters are and the course of their lives.
While parallel story lines follow an extremely successful ophthalmologist (Martin Landau, in an Oscar nominated performance which is arguably his best) and a perennial failure of a documentary filmmaker (Woody himself, earning Best Director and Best Screenplay nominations) and their various romantic, sexual and familial relationships, no less than God himself figures prominently in the dialogue.
Dr. Judah Rosenthal (Landau) finds his perfect seeming life upended by the demands of his mistress (Anjelica Huston), who morphs into a stalker when he tries to terminate their two year long affair. Driven to desperation because Dolores knows about his financial shenanigans ("Moving funds around isn't stealing") as well, he plots with his hard edged brother (Jerry Orbach), to arrange a contract killing. Before and after the killing, Judah grapples with his conscience and the possibility of getting caught. In one of several soulful conversations with his life long friend Ben (Sam Waterston), a rabbi on the verge of blindness, Judah proclaims that "God is a luxury I can't afford." In his fevered imagination, he interrogates his family members, especially his socialist aunt, at a long ago seder, raising profound moral and religious questions. His father espouses his belief in God, even over truth and expresses his governing credo: "the eyes of God are on us always." Judah, however, is determined to put aside the guilt associated with the murder he orchestrated and continue with his life as if nothing had ever happened.
Cliff, the documentary filmmaker, finds his job has been cancelled when the media mogul sees footage linking him to Mussolini; his ice princess of a wife, Wendy Stern (Joanna Gleason), who hasn't slept with him in the year since the anniversary of Hitler's birthday, has "found someone" as she says to her brother, the media mogul (Alan Alda) and the film producer (Mia Farrow, when the mutual flame burned hot) with whom Cliff has fallen in love, rejects him for the media mogul. The philosophy professor, whose search for meaning in what he fears is a cold and indifferent universe has been life-affirming, leaves a suicide note, saying simply, "I went out the window."
What's left? Well, since this is a Woody Allen movie, there are always old movies, such as the ones that Cliff watches with his niece and those he watches with the film producer, in a room surrounded with film stock and
canisters. Expert use is made of clips from Hitchcock's "Mr. and Mrs. Smith"(1941), with the line "I've given you the best years of my life" echoing Dolores' complaint to Judah and "This Gun for Hire" (1942), in which a squeamish character objects to the mention of cat gut as a murder weapon.
Old music also permeates the soundtrack of "Crimes"; Cole Porter and Irving Berlin hold sway alongside J.S.Bach and Franz Schubert.
There is so much to enjoy in "Crimes", not the least of which is the evocative and perfectly lit cinematography of Sven Nykvist, the longtime medium of Ingmar Bergman, Woody's primal inspiration since the days of "Love and Death"(1975).
"Crimes" is a perfect finale to a decade which began with "Manhattan"(1979) and embraced "The Purple Rose of Cairo"(1985), "Hannah and her Sisters" and "Radio Days"(1987). Savor the best video incarnation of "Crimes and Misdemeanors". Appreciate its brilliance. Just don't expect a laughfest, although the one liner, "the last time I was inside a woman, it was the Statue of Liberty", might cause you to choke on your popcorn, or Milkduds.

sugarloafReviewed in the United States on May 12, 2019
5.0 out of 5 stars
Masterful
Verified purchase
This is one of my favorite films. Woody Allan delves into darker themes here and weaves together two seemingly separate stories (and separate genres) that ultimately come together in a rewarding, yet surprising climactic scene.
7 people found this helpful

Amazon CustomerReviewed in the United States on April 28, 2015
5.0 out of 5 stars
What is your purpose in life?
Verified purchase
This is a movie about the basic fact of life: what will you make of it. It skillfully weaves a number of different stories on the topic, including some short pieces like the family dinner conversation. It repeats the common positions, and reminds us what they are. It does not answer the deep questions, that is not possible, except to the extent it raises them. I think it is a great movie.
13 people found this helpful

KGReviewed in the United States on July 1, 2010
5.0 out of 5 stars
A brilliant film about the nature of guilt and judgement
Verified purchase
Deeply moving, deeply though-provoking, brilliantly acted and occasionally very funny. A disturbing, dark film about human nature that still manages to leave room for a glimmer of hope within it's chilling bleakness.

Martin Landau is amazing, but all of the cast make significant contributions.

One of the few films I can watch over and over, with no loss of its power. Every time I watch it I end up pondering my own sense of morality, my questions about whether there is truly justice in the world, and the extent to which good people do bad things. And yet, along with all those heavy ideas, this is also entertaining, witty, and occasionally very tense story-telling of the first order.

For me it's second only to 'Annie Hall' amongst Allen's huge body of work, and stands as one of the few truly great films of the 1980s.
14 people found this helpful

Wing J. FlanaganReviewed in the United States on September 15, 2002
5.0 out of 5 stars
Woody Allen's finest serious film
Verified purchase
In Crimes and Misdemeanors, Woody Allen recalls the work of the great European directors (especially Bergman's soul-searching preoccupation with matters of faith). Two stories unfold in parallel: that of a successful ophthalmologist (played by Martin Landau), whose predicament with an extra-marital affair causes him to do the unthinkable; and a the serio-comic flirtations of a small-time documentary film-maker (played by Allen himself) contemplating his own extramarital romp with a production assistant (Mia Farrow).
Landau's character, Judah Rosenthal, afraid of ruination, calls upon his brother (Law and Order's Jerry Orbach) to make his little indiscretion "disappear". She disappears, all right - into oblivion, the victim of a hit-man Orbach's character met through his years in the restaurant business.
Allen's character, by far much lighter and more innocent, is trying to finance a documentary on an upbeat Holocaust survivor and Philosophy professor by condescending to make a television biography of his shallow, egotistical brother-in-law, a famous sit-com producer (Alan Alda).
What these two stories have in common is a deepening ethical dilemma posed by the ambiguity of moral standards in the absence of religious faith. Although raised in a traditionally religious Jewish household, Judah is not, himself, a believer - at least, until the guilt of his mistress' murder presses down upon him almost unbearably. Then he begins to fantasize that he will be caught and punished, if only because the seeing eye of God is everywhere, and He will make certain of it. Similarly, Allen's character is driven to the point of crisis not only by his failure to snag his own mistress, but by the suicide of the professor whose life seemed the very model of spiritual triumph in the face of adversity.
What emerges from the convergence of these two stories is a great envy and baleful respect for those who can have faith. Faith is a gift, as one character points out, like musical talent. It is the ability to walk in darkness, oblivious to the probable truth that there is only chaos in the Universe, and be contented in that ignorance.
The DVD lacks a director's commentary or any other nice features, but it is handsomely produced, with the work of cinematographer Sven Nykvist (long-time collaborator of Igmar Bergman) beautifully showcased. Anjelica Houston and Sam Waterston lend excellent support as Judah's mistress and a rabbi patient who is gradually losing his sight.
For those viewers who enjoy philosophical depth in films, and who eschew easy, predigested answers, this film is most certainly a must-see.
20 people found this helpful

serendipityReviewed in the United States on January 21, 2014
5.0 out of 5 stars
Exploration of how people can live with themselves after doing something very mean or evil to someone or groups of people.
Verified purchase
The name of this movie is a take off on Dostoyevsky's "crime and punishment" . In dostoyevsky's novel, the murderer feels so guilty, he feels the need to confess and finally does. This movie points out that this is fiction.
I asked a friend how come people could spend time being religious and then doing terrible things. He recommended this movie which explains it. I grew up watching movies having happy endings. This movie challenges this.
This is a timeless movie. It follows the same story as "match point".
The movie also shows that people get away unpunished for their crimes.
4 people found this helpful

CeltieReviewed in the United States on May 16, 2013
5.0 out of 5 stars
GUILTY!!!
Verified purchase
This movie is pure Woody Allen. If you appreciate Woody's humor and gift for writing...you will love this film. And, like the villian...he gets away with it. I had the VHS tape from years ago but wanted to update my Woody Allen library, this seller allowed me to buy it for a truly affordable price-and with quick delivery, it made it all possible for me to watch it again (only with better quality.)

I must say, my husband is not a Woody Allen fan and yet, he has watched this movie twice, so far with me. Try it, buy it ... you will like it!!
4 people found this helpful

Angie VallsReviewed in the United States on April 23, 2021
1.0 out of 5 stars
No lies or hidden apps!
Verified purchase
I am a fan of Woody Allen’s movies and I especially wanted this movie Crimes and Misdemeanors but although I paid an incredible amount for this movie (70 dls) I am going to return it because it does not have close captions-only in French and Spanish and I am hard at hearing-what a disappointment!!
See all reviews
Back to top
Get to Know Us
Make Money with Us
Amazon Payment Products
Let Us Help You
EnglishChoose a language for shopping. United StatesChoose a country/region for shopping.
© 1996-2021, Amazon.com, Inc. or its affiliates