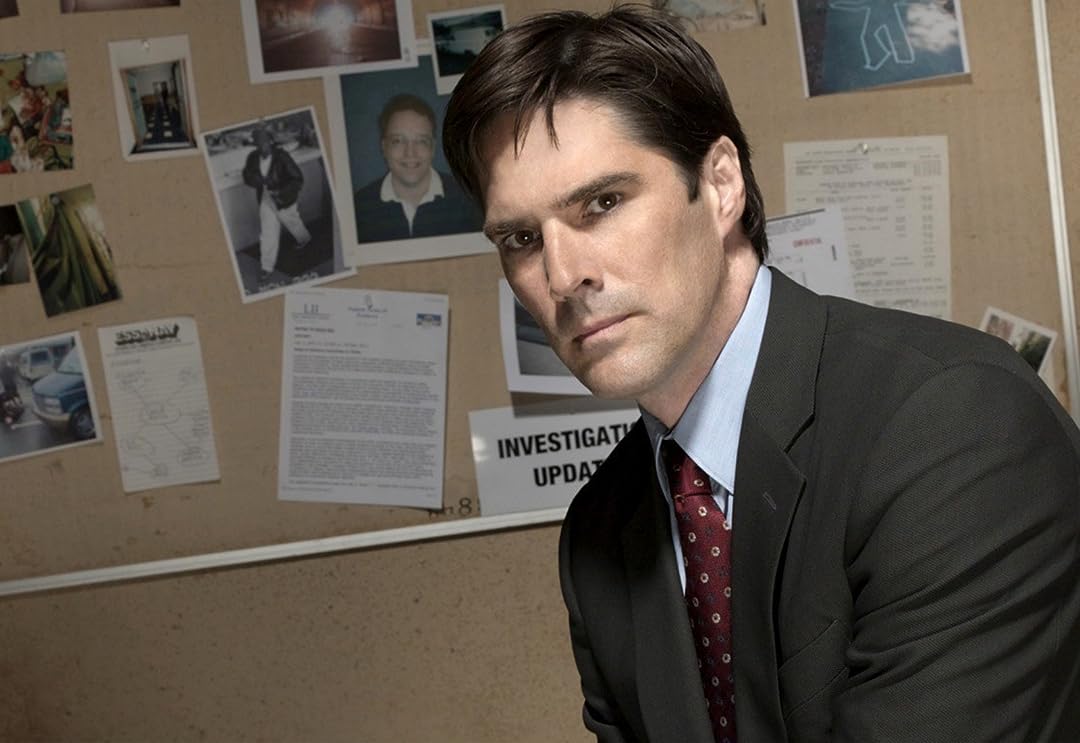 (1,889)8.02010X-RayNR
Season 5 delves deeper into the personal lives of the BAU team and also brings back many of the show's most feared killers.

EinsatzReviewed in the United States on July 22, 2021
4.0 out of 5 stars
“…a pariah even among demons…”
Verified purchase
I could have forgone episode 18, the pilot for the short-lived Criminal Minds: Suspect Behavior series. Also, dragging out C. Thomas Howell’s role over several (too-many) episodes was annoying, as well as the tedious backstory with Supervisory Special Agent Erin Strauss (Jayne Atkinson), my least favorite character who serves no useful purpose other than being irritating. This was not my favorite season.
Report abuse

PJReviewed in the United States on February 28, 2021
2.0 out of 5 stars
Problem
Verified purchase
Seanson 5. Disc 5 freezes with no picture. Sad...I pay money for this and seems to me that no matter what disc I buy the dvd has one disc that skips. 🤔🤔 can't get the video to load, here's a picture tho
One person found this helpful
Report abuse

Msbutterflywarrior23Reviewed in the United States on August 25, 2019
5.0 out of 5 stars
I love how it has subtitles great show
Verified purchase
I love this show so much and I’m
so sad to hear that it is going to be ending soon! I usually watch it on the ion channel because I don’t have cable. I would watch it especially when I would come home from my dialysis treatments tired. I love all of the episodes and especially the cast of characters in particular Morgan, Garcia and Spencer’s.
2 people found this helpful
Report abuse

D. MillerReviewed in the United States on June 17, 2012
5.0 out of 5 stars
Love the show!
Verified purchase
For those who don't know, CM is about FBI profilers. They try to catch serial killers, pedophiles, arsonists and the like through the use of psychology, history, victimology, geography and other "soft" sciences as opposed to the CSI shows that use the "hard" sciences like chemistry, botany, biology and physics. The shows look at various mental disorders and give us examples of real serial killers that shared those traits. The plots are interesting because we see a crime and our heroes are called in by local police to assist. They are three steps behind the killer. They do their thing, analyzing everything about the victim, not just the body, but details of their lives; the abduction site; the site where the killer dumped the body; and other details, and now they're only 2 steps behind. There's a lot of exposition where they talk out what they are doing and what it means. The ending is the typical confrontation with the killer. Sometimes they are captured, sometimes they die, frequently in gruesome and ironic ways, and a few times they escape.

This is the fifth season, so we know quite a bit about the private lives of the characters by now. It's a quirky cast and I think you'll like them. Most of the time you can watch an episode without needing to know any backstory on the characters, but that is not true for the start of this season. In the first season the team leader, Hodge, was married with a son on the way. Over the next season or two his job began to interfere with their marriage and they divorced. At the end of 4 and continuing into 5 there's a serial killer that goes after Hodge's family. Although each of the episodes works a case, there are segments of each that go back to that plot line. Episode 100, fittingly titled "100," is the culmination of that plot. You won't understand this episode if you don't know something of the backstory.

The downside of this product for me is that there aren't enough extras. Maybe the writers and directors are just really good, but there aren't many deleted scenes. The series isn't geared around special effects, but when they blow up a building we do get a short clip on it. There was a good explanation of the storyline I just mentioned on "100" but that's a rarity. The writers consult with some of the founding members of this group. I'd love to have more short interviews with the writers and the consultants on how they came up with the "unsubs" (unknown subjects).

Despite this I gave a 5-star rating because I love the show. The main cast is exceptional and the casting people come up with some wonderful guests like Tim Curry and Corbin Bernson. I recommend starting with season 1. On NetFlix it's only available on discs. It's on Hulu but it's much more expensive. The price here was a great bargin, I received the order quickly, and I didn't have any problems with the discs. I own them, and this is a series worth rewatching, especially in a weekend marathon, and if I get tired of them I can resell them, which you can't do with Hulu or NetFlix.

AshleyReviewed in the United States on May 21, 2020
5.0 out of 5 stars
Love the show but Disappointed
Verified purchase
5 stars cause I love the show

1 star cause I ordered new from amazon directly and when I got it I opened it and half the disc looked used and had marks on it that won’t come off. I’m hoping it will still play if not I’m screwed. I ordered 3 seasons and all of them have marks on them. They are not scratches but a foggy mark that won’t come off.
Report abuse

RavenReviewed in the United States on December 9, 2012
5.0 out of 5 stars
If you're a collector, WATCH OUT!!!
Verified purchase
For reasons beyond my understanding, there are 2 packaging versions of season 5 out there: the one with the multiple slim DVD cases inside a cardboard cover (just like all the other seasons) and then there's the multiple DVDs in a single DVD case.

The latter is what I received, and needless to say, I'm pissed. It matches none of the other seasons in my collection, AND it doesn't even match the product photo on this page!!!

I realize other people have also complained about this, but I feel like you should know this if you're a collector before you buy this season. I've noticed this problem with another series as well, but I feel like Amazon should at least give people the option of choosing which version to purchase.

That said, this is one of my favorite shows and I can't say anything bad about it.
4 people found this helpful
Report abuse

TimReviewed in the United States on July 18, 2017
4.0 out of 5 stars
Enjoyable
Verified purchase
Definitely enjoyable to watch. Thomas Gibson continues to impress as Agent Hotchner. Everyone is decent, except Garcia. Most the stories are pretty good, if not figured out and closed a bit to fast, but I get it, it's a TV show. The ones that do get stretched out are to personal. If they could do something like True Detective, that would be cool, but maybe that isn't realistic for this format. Glad I added this show to my watch list.
One person found this helpful
Report abuse

JeanneeReviewed in the United States on May 14, 2014
4.0 out of 5 stars
Crime-fighting with a caveat
Verified purchase
I like how they use there intellect to interpret the clues and figure out the criminal! However, my biggest complaint with 'Minds' is that it falls into the bottomless abyss of many modern-day shows (not just crime shows) in which the good guys have to have heavy-duty wounds and///or brokenness and non-supportive partners and///or no outside lives (so what's going to happen when they retire?!) ... if you can fast-forward through that, and avoid the Erin Strauss politics, this is a very fine show!
Report abuse
See all reviews
Back to top
Get to Know Us
Make Money with Us
Amazon Payment Products
Let Us Help You
EnglishChoose a language for shopping. United StatesChoose a country/region for shopping.
© 1996-2021, Amazon.com, Inc. or its affiliates