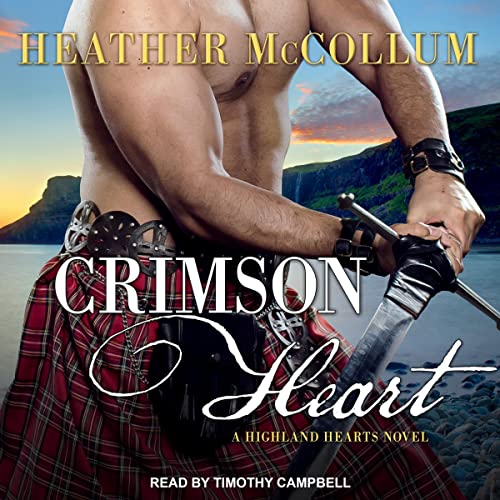 Elena has spent her entire life hiding her family name while walking the thin line between lady and servant in a Protestant household. Keeping the secret of her lineage has been a success for years, but now, with a new, fiercely Catholic queen on the throne, Elena's Protestant caretaker is being targeted. And when Bloody Mary discovers Elena's true identity, she must not only flee to Scotland for her freedom, but also for her life.

Highland warrior Searc Munro has secrets of his own. In a family of healers, his own dark, killing magic must never be known. But when his father's life is threatened, Searc unleashes his lethal power to save him. With his clan's suspicious glances and whispers plaguing him, he sets off alone, only to find another use for his magic in saving a beautiful lass being attacked in the forest.

Teaming up as exiles, Elena and Searc head toward Edinburg to find refuge. Yet, with a series of ritual killings haunting the city and a traitor attempting to assassinate Scotland's regent, suspicion turns to Searc. As word of another British heir reaches the country, the two must find a way to trust each other, despite their secrets, before it's too late.

Barb H.
5.0 out of 5 stars Great Story!
Reviewed in the United States 🇺🇸 on January 16, 2023
Verified Purchase
Prepare to stay up late. They meet under adverse condition, she is up a tree with her bow, fighting off a threatening group of thieves. He has left his home because of an incident which convinces him he is not wanted. They are both hiding secrets about themselves. However, the attraction and the fact that a Highland Warrior would never abandon a woman, especially not one so prone to accident, clothing in rags and oh, so beautiful.
Read more
Helpful
Report abuse

Talllone!
5.0 out of 5 stars Hang on I am fanning myself!!
Reviewed in the United States 🇺🇸 on January 30, 2023
Verified Purchase
Heather McCollum your Amazing writer. I had nights I could not get to sleep so I stayed up all night and well worth it.
Read more
Helpful
Report abuse

easy interface. relaxing.
5.0 out of 5 stars Wonderful read
Reviewed in the United States 🇺🇸 on January 15, 2023
Verified Purchase
Interest in all things Scotland made me choose this book. I am so very glad I did. I love a good love story with a happily ever after ending, and this certainly fits the bill. Strongly recommended for those of similar tastes. I enjoyed it immensely.
Read more
Helpful
Report abuse

jadaggs
5.0 out of 5 stars A lovely story.
Reviewed in the United States 🇺🇸 on October 2, 2022
Verified Purchase
Could hardly put this book down. Characters so appealing and funn of sass. You will very much enjoy this one. So romantic and lusty.
Read more
Helpful
Report abuse

Anissa
5.0 out of 5 stars Love this series
Reviewed in the United States 🇺🇸 on June 26, 2014
Verified Purchase
I was so excited to read about Searc in this novel. We first meet Searc in Captured Hearts as a young man. Now he is full grown and a lovable HUNK! He has powers like his mother but where hers are a healing blue magic his is a life stealing red magic. He feels he is a demon and leaves the clan. On his travels he meets up with a beautiful lady named Elena. Elena has quite the parentage. She is also on the run from Bloody Mary of England. Searc agrees to protect her and see her too safety. She at first sees his magic in action and thinks he is evil but as she gets to know him realizes that he is actually a kind, loving and very protective. Without giving too much more away, they both work together to solve a mystery, young girls are being kidnapped and murder with ritualistic markings. They befriend the Queen regent of Scotland, Mary of Guisse and end up falling in love. When Searc's parents show up they let him know they and the clan love and accept him the way he is and He decides to go back to his clan (and takes Elena with him).

I love the way Heather takes the history of this time and fits her characters in nicely. It as if Elena really did exist (survived) and had been living in the Highlands the whole time. The background is accurate and just fun to read. I couldn't put this book down, but I can never put any of her books down and I end up rereading all her novels. When the previous characters (of her other novels) make appearances it is like a some family reunion or get together. I love knowing (or keeping up with) all the previous characters and their children. She adds a few new characters and you end up hoping they get their own story. Judith of the Davidson clan sound quite interesting. Either way the love these characters share and the adventures Heather gives them are very enjoyable. You will not be disappointed reading her novels.

PS Dragonflies are starting to be my favorite by the way!!
Read more
One person found this helpful
Helpful
Report abuse

Fluffy
5.0 out of 5 stars Crimson Heart (A Highland Hearts Novel)
Reviewed in the United States 🇺🇸 on August 5, 2014
Verified Purchase
The last book in the series is without doubt a very entertaining story. It has very succinctly closed all gaps, answered all questions and erased all doubts. Everything was neatly tied up with a little bow, thank goodness! Although, I have to give Ms. McCollum credit for she kept you wanting more and more. Now it's done and the series is over, which saddens me to no end! I really wanted more concerning Kincaid, Meg's and Caden's eldest son. With any luck, maybe the series has future potential after all! That would suit me just fine! (Hint, hint to Ms. McCollum!)

This story is filled with raw emotion, real fear, passion, evil, good, lust, and such self doubt and self loathing in Searc, due to his magic. Thankfully he meets Elena, saves her butt and sets out to deliver her to her cousin. Took awhile for trust to develop between the two, but once there, they became inseparable and undefeatable. To see the love blossoming across the pages between them was fascinating and heartwarming. The strength and love between them was unmatched. There is plenty of humor and old characters toward the end to finalize their stories, and hopefully have the peace they all craved.

Lots of intrigue and secrets abound in this story. Regent Queen Mary, mother to future Queen Mary of Scott's, is quite the character! She keeps Searc and Elena jumping thru hoops.....and you can tell she enjoys every minute of it! Too funny. There are all kinds of other fascinating characters, some you'll like, some you'll question their motives and some you will outright loath. If you should deceide to read the series, I would recommend you do so in order. Happy reading! Cheers!🍻
Read more
5 people found this helpful
Helpful
Report abuse

C. S.
4.0 out of 5 stars Exciting, Scary, Deep Love, Mystery, Traitors, Magic, And More. Books are Miss Marked
Reviewed in the United States 🇺🇸 on July 8, 2019
Verified Purchase
Books are out of sequence. Look below. A solid book for the series of mystic healers. I have enjoyed all of the books so far. This one was different in many ways. All of the books have romance, a little sex but, not much build up in the steamy department. I like a really sexy build up and these books just don't quite get there for me. There is some humor and some very tense moments. The characters from the previous books continue through out the story. Loved seeing Cheo. I would have liked reading more about him. It is best to read all of the books in order. The mystic parts are fascinating. It is fairly predicable and enjoyable. The characters are well described along with the setting. I liked all of the characters except the villains of course and I enjoyed Queen Mary very much. Exciting and scary ending put a really nice finish to the story. I'm sure there is another book coming soon :) I highly recommend the entire series especially if you like a bit of magic,
The author has this series way out of sequence. Read in this order:
#1 Highland Heart
#2 Captured Heart
#3 Tangled Hearts
#4 Untamed Hearts
#5 Crimson Heart
Read more
2 people found this helpful
Helpful
Report abuse
See all reviews

Kindle Customer
5.0 out of 5 stars Great read
Reviewed in the United Kingdom 🇬🇧 on May 16, 2017
Verified Purchase
One of the best of the series! A good laugh, fun and a murder mystery, too! Always great to know what the characters for the other books have gotten up to!
Read more
Report abuse

wilko
5.0 out of 5 stars Love it
Reviewed in the United Kingdom 🇬🇧 on May 16, 2018
Verified Purchase
Great read couldn't put it down
Read more
Report abuse

Pamella
4.0 out of 5 stars Much better than expected
Reviewed in Canada 🇨🇦 on January 19, 2023
Verified Purchase
Thinking it.would be a light read but it was actually very entertaining and well written. I will definitely read more.of her books.
Read more
Report abuse
See all reviews