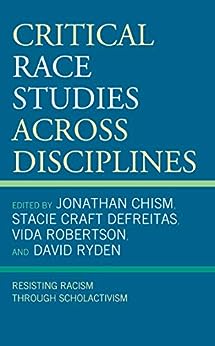 This book argues that critical race theory (CRT)—which originated within Legal Studies during the 1970s—has permeated multiple academic disciplines and informs the ethical commitments of scholars in diverse fields of study. Critical Race Studies Across Disciplines includes essays by scholars of African American studies from various disciplines, who directly and indirectly incorporate CRT through signaling a commitment to scholar-activism or scholactivism. Scholactivists hope to understand the roots of anti-Black racism and to actively oppose all forms of oppression. Drawing on CRT, the volume counters the colorblind rhetoric of those who dismiss the notion of systemic racism, discount racial inequities, and disregard racial justice advocates as malcontents fanning the flames of racial dissension. The contributors of this collection challenge racism centering the stories, perspectives, and counter-narratives of African American soldiers, teachers, students, writers, psychologists, and theologians who continually defy and resist oppression in myriad ways.

Critical Race Studies Across Disciplines further bolsters the academic and practical utility of critical race theory in understanding the real-world implications of systemic oppression throughout the world. Scholars and the public will be drawn to the compelling arguments for and evidence of CRT's essential role of 'scholactivism' in redressing racial inequities ingrained in every aspect of life in the U. S. and beyond. This book is a 'must read' and 'must do.'

Critical Race Studies Across Disciplines: Resisting Racism through Scholactivism is an invaluable text that advances a complex analysis of what drives the persistence of US racial injustice. It builds upon long-standing critical theories and real-lived accountsthat emerge from and inform the evolution of African American culture in its communal quest for social justice. Chism et al have love-crafted an anthology that merits becoming a landmark in the burgeoning field of critical race theory. What other normative accounts of history in various academic disciplines discount and disregard, this text lays bare for all to see and comprehend. In so doing, it counters and corrects the colorblind rhetoric, racial inequities, and racial dissension that make up the study of these yet to be united states of America.

Jonathan Chism is assistant professor of history and a fellow of the Center for Critical Race Studies at the University of Houston-Downtown.

Stacie Craft DeFreitas is a licensed psychologist, an associate professor of psychology, the Interim Associate Dean of the College of Humanities and Social Sciences, and a fellow of the Center for Critical Race Studies at the University of Houston-Downtown.

Vida Robertson is associate professor of English and humanities and serves as the Director of the Center for Critical Race Studies at the University of Houston-Downtown.

David Ryden is professor of history, Interim Dean of the College of Humanities and Social Sciences, and a fellow of the Center for Critical Race Studies at the University of Houston-Downtown.

Amazon Customer
5.0 out of 5 stars Great Primer on the Interdisciplinary Focus of CRT
Reviewed in the United States on June 26, 2021
Verified Purchase
Chism’s reflection on scholactivism is essential to understanding critical race theory from the religious / theological perspective and how this is lived out in light of Black Theology. Black Theology needs the addition of the tools of CRT to make real impact in a world that requires religious practitioners who reject Church dogma and doctrine as the essence of spirituality to instead embrace prophetic activism as praxis for faith in action in response to a racist world.
Read more
Helpful
Report abuse

Jacqui vat
1.0 out of 5 stars Hypocritical
Reviewed in the United States on March 14, 2022
The author writes about CRT and the affect of racism in America. He was scheduled for a podcast to discuss CRT and promote his book but, being that we are white people in a rural area, he drove past our studio, as we watched him, and decided not to show or call to cancel. Superficiality at it's best.
Read more
Helpful
Report abuse
See all reviews
Report an issue
Does this item contain inappropriate content?
Report
Do you believe that this item violates a copyright?
Report
Does this item contain quality or formatting issues?
Report