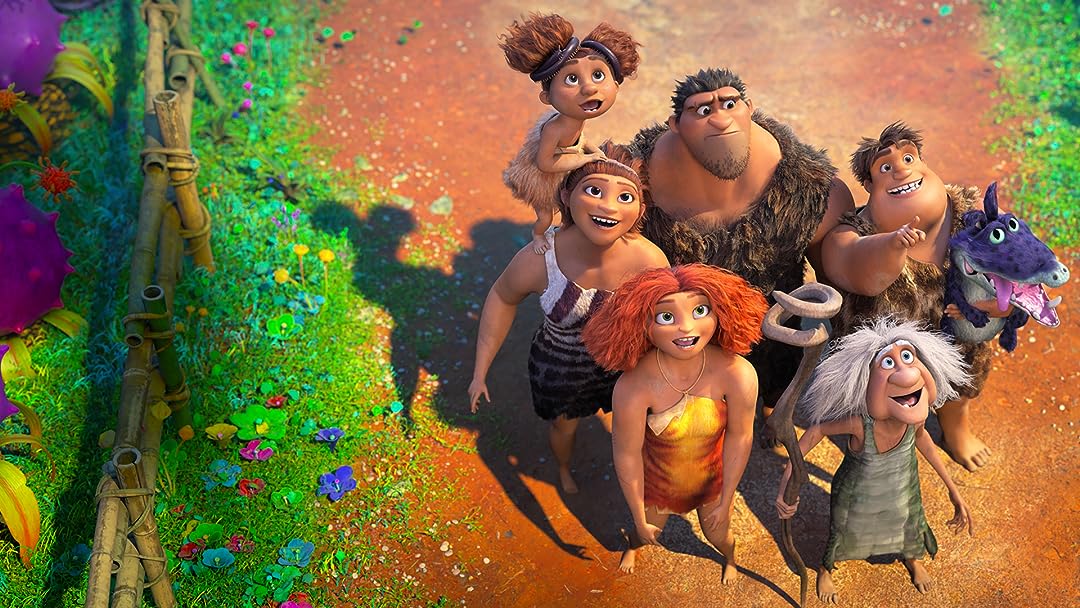 The Croods: A New Age

(55,340)
6.91 h 35 min2020X-RayUHDPG
In search of a new home, the Croods encounter the more sophisticated Betterman family. A new threat forces the two families to set aside their differences to avoid extinction.

HavehopeReviewed in the United States on January 31, 2021
2.0 out of 5 stars
Meh, super bizarre story line
Verified purchase
Spoiler alerts in this review: The first Croods movie was cute, funny, and the story line made more sense. A prehistoric family who's forced to leave the safety of their cave and while searching for a new home learn to overcome fears. Now in part 2 they meet another more evolved family named the Bettermans who do everything, well, better. The Bettermans have a teenage daughter which causes some tension for Eep and Guy and eventually the two families are at odds. Then the story just gets bizarre! The men get captured by a colony of punching monkeys who are themselves being terrorized by a giant "monster" and plan to sacrifice the men to appease the monster. The women go searching for the men while fighting each other over their differences. They face obstacles such as land sharks and wolf spiders. Grandma tells them all about her Thunder Sisters tribe and encourages the ladies to work together. Grandma's hair which is really an animal named wigasus flies away in search of the men. Who comes up with this stuff? Just as the guys are about to be sacrificed... you guessed it, the women burst in and save the day! But as warriors riding their wolf spiders of course! In the end the monster gets a hold of one of Eep's little toes. Now her entire body is the size of the monster's finger tip yet somehow the monster is holding onto her one little toe to prevent himself from falling to his death? Really?
I am so disappointed because this movie had potential to be so much better! It was a complete waste of money. If you're interested in watching it just wait until it's free or at least really cheap. On top of it being bad I had a lot of problems getting it to even play. I kept getting errors from Amazon and had to try many times before it finally worked. If I had to sum it all up in one word- disappointing.
8 people found this helpful

DiReviewed in the United States on December 19, 2020
2.0 out of 5 stars
Sequel not living up to the first
Verified purchase
We did laugh several times, but also kept saying ‘this is so bad.’ The animation was ages away from the first film and the lighting was terrible. Who notices the lighting in an animation...no one unless it’s terrible.
Overall it was back and forth between 2 and 3 stars and the kids gave it 2.
13 people found this helpful

Marjorie E. ThomasReviewed in the United States on June 9, 2016
5.0 out of 5 stars
Fun for the whole family
Verified purchase
I received this as a free copy on a site can't remember which one. all I had to do was sign up and find it then push the button and it came on my amazon account then I just chose my IPhone Kindle. the Croods is about a family that was lost year ago in the wild they had children and live like caveman they hunt, play, joke around, had rules the children pay attention to their father and mother but like all kids they rebel at some point, I have watch this movie at least three time before I order it.

Yes I would recommend this Movie

BoBsMomReviewed in the United States on December 20, 2020
1.0 out of 5 stars
Nowhere near as good as the first
Verified purchase
We loved the first movie. It was funny/fun for the whole family even with older kids.
This movie was almost painful to watch. The first half was very slow and boring. The second half had more action in it, but a lot of it was just plain stupid jokes. I think we laughed once. It had none of the witty humor of the first one.

Most of the family quit halfway through. I finished it only because we paid $20 for it. I wouldn't recommend this for anyone over 5 and/or at least wait for it to be available for free on Netflix or similar.

Ed GilesReviewed in the United States on June 17, 2020
4.0 out of 5 stars
Laughter Therapy
Verified purchase
I'm not kidding, laughter produces a lot of healing in this world. It's just not measurable like "I took 2 aspirin 2 hours ago and my headache is still killing me" sort of thing. We took the grandchildren to see it when they were small and when Grandson entered "the stomach that walks like a man" phase of adolescence, DH really enjoyed quoting the heroine "What are LEFT OVERS?" whenever skinnny dgs ate enough to fuel a percheron. Watch it even if you don't have littles to enjoy it with.
7 people found this helpful

Jimmie G.Reviewed in the United States on June 5, 2021
4.0 out of 5 stars
That price tag though!
Verified purchase
We paid full price to watch this during the pandemic which is fine considering we own it BUT the kids love it and have watched it 100 times in two days. The story picks up where the croods leave off in the first movie. They don’t end either movie on a cliffhanger which is good for younger viewers but I love how both movies have elements for everyone to appreciate babies love the animation kids love the physical humor, adults love the family elements and there is even more mature audience vibes too. This sequel has social lessons and is about intricacies of relationships with love interests and families but also with women empowerment and friendship. They took an approach on morals that was not typical and it paid off.
2 people found this helpful

Karen (Amazon Customer)Reviewed in the United States on September 16, 2016
5.0 out of 5 stars
Great family movie
Verified purchase
My grandson is only 2 and LOVES this movie! I actually think it is pretty good also! The Croods, about a cavemen family who rarely venture out of their dark cave for fear of dying horrible, prehistoric deaths, has a tight script, inspired voice performances and some unexpectedly tender moments.
Eep, the teenage daughter of Grug, her paternal warden who lives his life in constant fear of the unknown and has taught the rest of his family to live a routine, reclusive life that only involves emerging from the darkness every few days to hunt down a giant egg to eat. The rebellious daughter who longs for freedom.
The story picks up once the family meets Guy, a slender young man with a more advanced brain capable of coming up with solutions for common everyday caveman problems (shoes, umbrellas, stilts, fire, etc) and he warns them that, yes, their entire valley is about to get swallowed up by earthquakes and lava. From there, poor Guy is basically, for lack of a better term, thumped on the head and forced to lead them to a higher plateau. The fun here though is Grug's hatred of Guy's intellect and Eep's methods of courting a boy - which mostly involve accidentally pummeling him. Also, through the lens of Guy, we're able to see just how hilariously inept The Croods are at just about everything.

There is a lot of physical humor in The Croods, but - shockingly - none of it involves bodily functions! There's slapstick galore, and a ton of hyperkinetic action-y chase sequences, but they all come together nicely. In fact, one of the most entertaining sequences in the movie happens within the first five minutes when the Croods head out and try to track down breakfast. You'll still find a lot of animated movie staples in this one; the idiot, the sassy granny, the cute animal sidekick.
15 people found this helpful

NanzReviewed in the United States on March 21, 2022
2.0 out of 5 stars
Very weak sequel to a very good and heartwarming first part.
Verified purchase
The Croods is one of my favorites: very good storyline, good music, lots of laughs. I was hoping this sequel would live up to it, but sadly, it failed. Sandy already spoke in the first movie, but apparently, the makers of this sequel forget it. And what's this all about the grandma being a matriarch of an all-women warrior clan and that they didn't have "boy problems"? Again, it doesn't line up to the first part of the story where grandma talked about being in love with a guy but her dad traded her instead to Olga's dad. Also, Crood made fire by himself in the cave; Guy made fire by himself. But in part 2, Guy says "it no longer takes two people to make fire". Weird storyline (grandma's hair is a flying thingy which wasn't the case before, Eep has a peanut toenail which didn't fall off when a giant ape monster was hanging on to it. It is definitely not as fun as the first one.
See all reviews
Back to top
Get to Know Us
Make Money with Us
Amazon Payment Products
Let Us Help You
EnglishChoose a language for shopping. United StatesChoose a country/region for shopping.
© 1996-2022, Amazon.com, Inc. or its affiliates