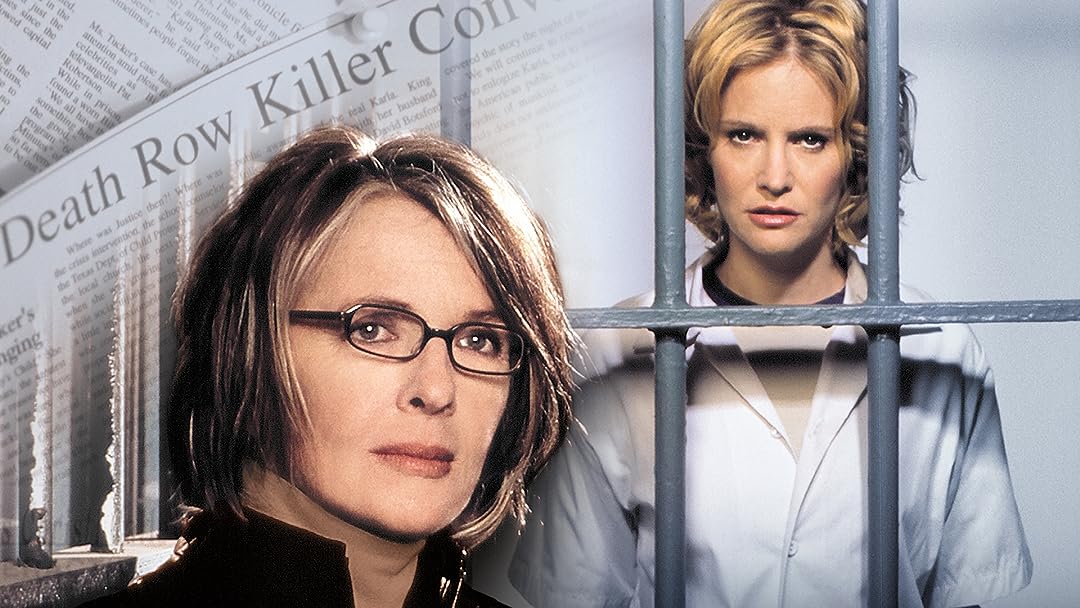 (50)
1 h 31 min200216+
Based on the book "Crossed Over: A Murder/A Memoir," this is the true story of the deep and healing friendship between a grieving mother, Beverly Lowry (Diane Keaton), and death row inmate, Karla Faye Tucker (Jennifer Jason Leigh).

SkrzReviewed in the United States on June 19, 2019
1.0 out of 5 stars
Not the truth
Verified purchase
This movie has so many things wrong with it, not worth your time and offensive to Texas.
First of the story of the murder was wrong she did many of the blows herself with the pick-axe to both victims the woman victim did not die as easy as they make out she begged for her to stop and for her life during her attack.
They show in this movie that all the guards in the prison walk around in cowboy hats that don't even fit right...totally false prison guards are not allowed to were anything but uniform caps in our prisons.
And Here in Texas if we wear cowboy hats at all the men take them off indoors always as a custom anyways,
they make out like everyone in Texas are a butch of stupid hicks and hillbilly's
Justice is justice she killed two people so the punishment fits the crime.

MelReviewed in the United States on November 29, 2021
1.0 out of 5 stars
What a bad message sending to people
Verified purchase
The two main characters had nothing in common. This is a typical story of a criminal turning religious after she gets caught and put in prison. The criminal never cared about people when she was burtally killing them and watching them die a slow painful death, but when she gets caught she becomes this reliegious person who starts caring all of the sudden about people because she knows there is no way out. It is a story of glorified criminal. She didin't have to suffer when they gave her lethal injection but she killed people and watched them suffer a slow painful death.

Lisa MillwoodReviewed in the United States on September 2, 2017
3.0 out of 5 stars
Okay, Nothing special
Verified purchase
The movie was done pretty well and was close to accurate. It's a movie so not everything can be included. The timelines seem a bit lost. The woman was on death row for about 14 years. She was married to the prison "minister" for three years before her execution. The movie really makes it seem like the time was much shorter. This murderer was allowed to live longer than her two victims. She didn't deserve mercy. She made the choices. No, her childhood was not good, but there are MANY children that go through horrific childhoods and don't kill someone.

Anyways, back to the movie. It was okay, but Diane Keaton is incapable of acting out "anger". She tries to hard, which in turn makes it seem fake and forced (as it is). She overdoes it in all movies that she does. She does much better in movies where there is not a wide range of emotions for her to exhibit.
3 people found this helpful

Eli B.Reviewed in the United States on November 21, 2017
4.0 out of 5 stars
Watch with an open mind and heart!
Verified purchase
At first, this movie seems pointless at it's best and Diane Keaton's character seemed like a damn fool. As it went along, I began to see the message of this story which was extremely touching. From my point of view (without giving too much away), I believe Beverly (Diane Keaton) friendship with a murderer (Karla Faye Tucker) helped her gain closure in losing her son through the forgiveness she felt for Karla.
Since the killer of Beverly's son was never found, I think she was able to heal through the power of forgiveness through this prison inmate. She and Karla began to build an unusual bond and in the end she was able to see Karla as a person rather than just a murderer. In a way, she was able to relate her son who was also a troubled youth to Karla. In return, Karla (Jennifer Jason Leigh) was able to finally forgive herself for what she had done and was able to find herself worthy enough to receive salvation from God.
2 people found this helpful

Dr. SparklesReviewed in the United States on September 25, 2011
3.0 out of 5 stars
LACKED GRIT FOR DEATH ROW DRAMA
Verified purchase
I love Jennifer Jason Leigh, this is mostly why I purchased this movie although I had not heard of it before. Diane Keaton plays a writer, Beverly, who is going through depression and overwhelming grief fueled by the loss of her teenage son. Jennifer Jason Leigh is Karla Faye Tucker, a woman placed on death row for murder. Beverly starts visiting Karla in prison after more or less "tracking" her through newspaper articles, etc. They are clearly two different people and it seems at first the entire thing is not going to work out. However, as they start talking and listening to each other, the relationship grows and they find commonalities, understanding of differences and sympathy for each other. Visiting Karla becomes sort of a therapy for Diane Keaton as she finds Karla to "get her" and understand her in ways others have failed. Karla also finds a friend in Beverly who eventually tries to appeal for Karla's pardon from certain death. At first I thought I was going to hate the Karla Faye Tucker character - I thought she would be miserable and hard and remorseless. The opposite was actually true. The movie shows Karla Faye Tucker on the path to becoming someone better even though she knows she will never leave prison and will ultimately die. There are points in the movie when you think the friendship will end, but the bond is strong and the two women find forgiveness in each others faults. Part of Diane Keaton's Beverly character wants to save Karla Faye Tucker to sort of repair what she feels was failure towards her son. In other words, if she couldn't save her troubled son, she was going to have a chance by trying to save Karla. Things don't work out all rosy, but there is definitely closure and you realize just how worthwhile the relationship between the women had been. I liked this movie, but it wasn't a favorite for me. Maybe the passion was all wrong or I was expecting something different from Jennifer Jason Leigh, or maybe Diane Keaton just seemed to be playing the same sort of role as usual. When the movie referred to Karla Faye Tucker as a "killer" or something like that, I was expecting a movie about a serial killer with a disturbing core who went on a drug induced rampage. To me, this movie really did not capture that, it almost made Karla Faye look like a bystander who, confused by her drug consumption, did a horrible act. The committment to the character was not enough conviction to really explain to the audience who Karla Faye Tucker was and exactly what she did. We do get glimpses of Diane Keaton reading over details of the case, but she doesn't really share much with us. She just decides to stop seeing Karla for a little while which doesn't last. I found it hard to believe that Karla's life in prison was that "peachy". She falls in love with a pastor who ends up marrying her and seems to have a ton of leeway for someone on death row. I guess I wanted more grit, especially from one of my most favorite actresses. It's okay, you can watch it, but I suggest if this subject interests you to read more about it.
5 people found this helpful

Laurel-Rain SnowReviewed in the United States on November 23, 2008
5.0 out of 5 stars
When Lost Souls Collide...
Verified purchase
When writer Beverly Lowry suffers a crushing depression following the tragic hit-and-run death of her son, she turns inward. In the aftermath, however, even as she sustains herself by enshrining her lost son by never touching or removing his possessions, she slowly begins to enlarge her world, bit by bit, as she studies news articles about a death-row inmate whose story intrigues her.

Meeting for the first time and separated by the plexiglass divider, the two women appear to be divided also by their values, goals, needs and life experiences. How can two such women find common ground? But unexpectedly, a bond develops - at first tentatively - as Beverly continues to visit Karla Faye Tucker and learns her story. Probing the psyche of a drug-addicted woman driven by the overwhelming need of that desire somehow shines a light for Beverly on the darkness of the human condition, a place she has become familiar with in the months following her son's death.

Then Beverly finds a purpose, as she seeks to gain some kind of clemency for the inmate. She makes appeals to all the authorities, hoping to commute the sentence to life imprisonment rather than death.

Throughout their quest for redemption, the two women share and grow and help each other heal, even as the outcome for a change in Karla Faye's sentence seems unlikely.

Based on a true story,[[ASIN:B001DF6816 Crossed Over]] is an unforgettable movie.

chrisReviewed in the United States on June 26, 2018
4.0 out of 5 stars
The story is compelling and the acting is very good
Verified purchase
I had no idea what this movie was about when I started watching. I was drawn to the name of the title, and the fact that it had Diane Keaton, and I think she's a reputable actress. I was drawn in immediately by the story line, and I found myself trying to understand why a woman would do what this woman (Keaton's character) did. I think the truth is, people grieve in different ways, and unless you have experienced the loss of a child, you could not begin to comprehend how that loss could impact you. It did make sense to me, and I watched the entire movie. It's not your typical feel good movie, so maybe that is why so many gave it a low rating. It is a thought-provoking movie and makes you think about death and how the loss of a child can affect a person.