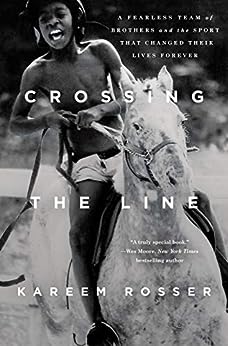 Crossing the Line: A Fearless Team of Brothers and the Sport That Changed Their Lives Forever Kindle Edition

"A marvelous addition to the literature of inspirational sports stories." - Booklist (Starred Review)

"Crossing the Line will not just leave you with hope, but also ideas on how to make that hope transferable” - New York Times bestselling author Wes Moore

An inspiring memoir of defying the odds from Kareem Rosser, captain of the first all-black squad to win the National Interscholastic Polo championship.

Born and raised in West Philadelphia, Kareem thought he and his siblings would always be stuck in “The Bottom”, a community and neighborhood devastated by poverty and violence. Riding their bicycles through Philly’s Fairmount Park, Kareem’s brothers discover a barn full of horses. Noticing the brothers’ fascination with her misfit animals, Lezlie Hiner, founder of The Work to Ride stables, offers them their escape: an after school job in exchange for riding lessons.

What starts as an accidental discovery turns into a love for horseback riding that leads the Rossers to discovering their passion for polo. Pursuing the sport with determination and discipline, Kareem earns his place among the typically exclusive players in college, becoming part of the first all-Black national interscholastic polo championship team—all while struggling to keep his family together.

Crossing the Line: A Fearless Team of Brothers and the Sport That Changed Their Lives Forever is the story of bonds of brotherhood, family loyalty, the transformative connection between man and horse, and forging a better future that comes from overcoming impossible odds.

* Featured on CBS's This Morning Saturday and NBC's Today Show *

"A marvelous addition to the literature of inspirational sports stories. It's an occasionally heartbreaking but ultimately uplifting coming-of-age story about the bonds of brotherhood and the unique healing powers capable of being generated between humans and horses." - Booklist (Starred Review)

"Vulnerability is exactly what gives Crossing the Line its strength; Rosser not holding anything back is the key quality that makes this first-time author’s words worth your time... if anybody should be considered the face of American polo, it’s Kareem Rosser." - InsideHook

"[A] poetically spun tale of championship...Rosser's aspirational tale, though full of sorrow and hardship, is one that readers will cheer." - Kirkus

“Of all the stories around Polo that I have experienced in my career, this is by far the most inspiring." - Nacho Figueras

"Crossing the Line is truly a special book. It will not just leave you with hope, but also ideas on how to make that hope transferable. Kareem's remarkable story is one that should be read and understood by all.” - Wes Moore, Rhodes Scholar, Former White House Fellow, and New York Times bestselling author of The Other Wes Moore

Kareem Rosser is from Philadelphia, PA. He received a BA in economics from Colorado State University (CSU). While at CSU, he led his collegiate polo team to a national polo championship. At the same time, he was honored as the Intercollegiate polo player of the year. After graduation, Kareem began working as a financial analyst at an asset management firm. Also, he serves as the Executive Director of a non-profit fundraising arm called Friends of Work to Ride. --This text refers to the paperback edition.

Amazon Customer
5.0 out of 5 stars Amazing Story; Polo Saved Lives
Reviewed in the United States on February 22, 2021
Kareem’s story is one of perseverance and persistence. He’s overcome so much. Blessings.
Images in this review

Yvonne
5.0 out of 5 stars An excellent story of perseverance, dedication and support.
Reviewed in the United States 🇺🇸 on November 9, 2022
Verified Purchase
I thoroughly enjoyed this story. Kareem Rosser's journey from a West Philadelphia young boy to successful polo player was inspirational. Our community members read his book; we were able to join a Zoom event and listen to his presentation. This was definitely a special treat.
Read more
Helpful
Report abuse

Northeaster
4.0 out of 5 stars Perspective
Reviewed in the United States 🇺🇸 on September 24, 2022
Verified Purchase
It gave me a good perspective on black inner city kids and the sport of polo.
Read more
Helpful
Report abuse

EJ
5.0 out of 5 stars excellent
Reviewed in the United States 🇺🇸 on September 29, 2022
Verified Purchase
This is a very interesting recounting of the author's childhood and teenage years told in a interesting and straightforward manner. The author comes across as a lovely intelligent insightful person.
Read more
Helpful
Report abuse

Shelly M.
5.0 out of 5 stars our book club selection
Reviewed in the United States 🇺🇸 on August 20, 2022
Verified Purchase
Wow, this book was so good. I was never sure how the ending would go, so it kept me going. The writing was very good and I felt strongly about every main character. Beautiful, yet painful. An important story to help readers learn about polo, horses, and family life in a dangerous, urban setting. Lezlie is an Angel on Earth.
Read more
One person found this helpful
Helpful
Report abuse

bettym
5.0 out of 5 stars Great read!
Reviewed in the United States 🇺🇸 on August 24, 2022
Verified Purchase
Loved this book! I got it because I met one of the people in the book but what a great inspirational story.
Really a great easy read

tanya
5.0 out of 5 stars Incredible, inspiring, MUST-READ
Reviewed in the United States 🇺🇸 on February 18, 2021
Verified Purchase
Crossing the Line is an absolutely incredible memoir of perseverance, devotion, and love. It was an absolute honor to be able to read Kareem's story, and to share in the hardships and heartbreaks, glory and successes of his life within the pages of this book. I cannot recommend this book enough to not only polo fans, and horse lovers, but to EVERYONE. I am not typically a fan of non-fiction, but this book touched me in ways I can't quite put into words. It was a page-turner, and a tear-jerker, and it opened my eyes to a version of a world I never really truly understood. I have been impressed and have loved the concept of the Work to Ride program since I heard of it, but I'm filled with wonder at the power it has to help kids escape The Bottom in Philadelphia, and how much importance it brings to the lives of underprivileged youth in Philadelphia. It is an incredible program that I hope gets more attention after this book.
Read more
6 people found this helpful
Helpful
Report abuse

JZ
5.0 out of 5 stars Believe in the steel of the heart, as much as it’s emotion.
Reviewed in the United States 🇺🇸 on March 16, 2022
Verified Purchase
“Triumph of the spirit” is an often hackneyed phrase. This book keeps to the true definition. What an incredible story, man, triumph. I picked it up because of elements I felt connected to. I stayed because Kareem tells the story cleanly, allowing the reader to fully engage; allowing the emotions to speak for themselves. It’s hard to believe it’s a debut effort. Read it, give it to family and friends. In these difficult times, our spirits need a bit of triumph.
Read more
One person found this helpful
Helpful
Report abuse
See all reviews
Report an issue
Does this item contain inappropriate content?
Report
Do you believe that this item violates a copyright?
Report
Does this item contain quality or formatting issues?
Report