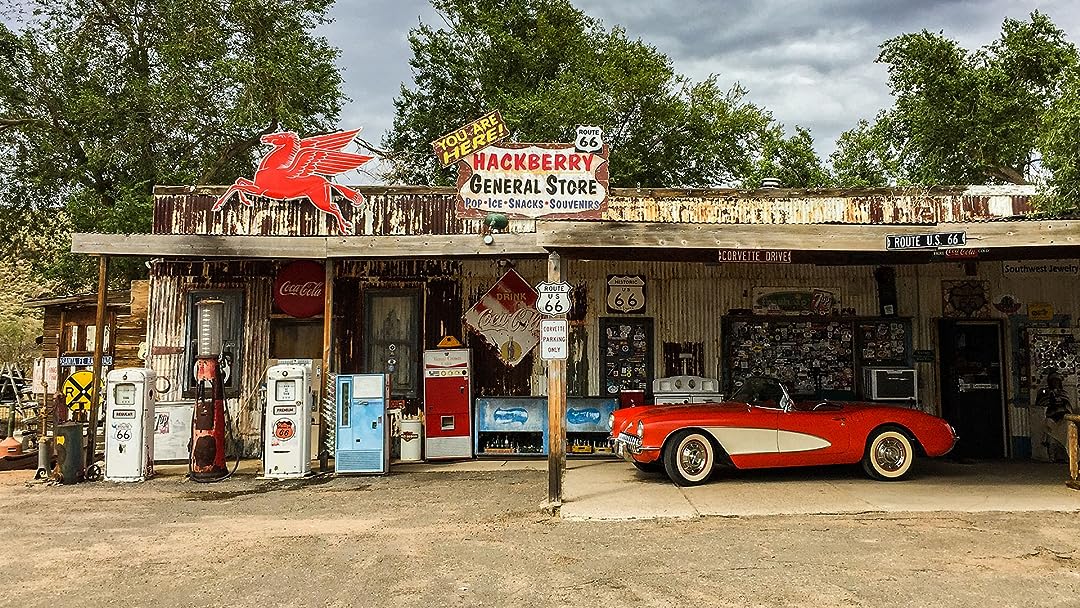 Season 1
(10)
2007ALL
It began in the 1920's with the vision of a paved highway that connected Chicago with Los Angeles and the West, rolling through 2,400 miles, 8 states and 3 time zones while tying together the Great American Southwest. Discover Route 66, the Mother Road, with noted author Michael Wallis, the road of dreamers and ramblers, drifters, and writers, of no-tell motels and salty truck stops.

Charles CastelReviewed in the United States on August 21, 2020
4.0 out of 5 stars
Warm and nostalgic at expense of historical substance
This is a light and enjoyable look at Route 66. The series includes 12 episodes, 4 of which filmed in the early 90s, another 4 in 2002, at the time of the 75th anniversary of the Mother road, and another 4 in about 2007 around the time of the 80th anniversary. I get the sense this show was made to be broadcast as a syndicated show on TV stations along Route 66 and whatever additional markets would be interested in showing this. NO doubt there are DVDs of this show for sale at the myriad Route 66 museums along the road. According to the end credits the show was produced in cooperation with the historic route 66 historical societies of each of the 8 states the highway traversed.

As a result, this is a very homey and nostalgic series. What I enjoyed most were the trips across Route 66 in the early 90s and early 00s and seeing how the road and various towns, businesses and tourist attractions had changed over that timespan. Some of the characters profiled were interesting though I didn’t find all of them of interest, but such is life.

Episode 10 is my favorite episode because it touched on the darker side of Route 66—the accidents caused by uneven grade, the Dust Bowl families using the road to get to the so called promised land of California during the Depression, the checkpoints California set up at the border ostensibly for Agricultural inspection, but really to discourage the “Okies” and “Arkies” from entering the state. I wished there had been more history and less nostalgia in this series. It would have made for a more substantive viewing experience for me. Among topics I would like to have seen explored:

1-What was traveling Route 66 in its hey day like for African Americans? Did certain businesses we see in the series not serve African Americans prior to the end of Jim Crow? Were any of the towns on the route “Sundown towns”, that is, towns where Blacks were expected to clear out by sunset?
2-How did the highway vary in its design/engineering? Were there divided 4 lane stretches? If so, in what areas? I would like to have heard more about how rough Route 66 was in New Mexico and Arizona before certain stretches finally received pavement.
3-The series mentions when the final stretch of interstate replaced 66 in Williams Arizona, but how long did it take for 66 to be replaced by interstate? What state was first to do so? I remember in 1975 my dad driving me and my sister down to Kansas on I-55 in Illinois and certain parts of 55 gave way to 66 which was much different in feel than I-55. It would have been interesting to hear from those who traveled on these hybrid 66/interstates and their feelings as the old Mother Road was slowly being replaced.
4-Finally the series emphasizes how nostalgic Route 66 makes its travelers feel and the interstates are constantly derided as Concrete slabs. Fair enough. But it seems many drivers abandoned 66 for the interstates. What are the conditions that led to this? Maybe most drivers didn’t really care for 66 and preferred the speed and convenience of the interstate?

Nevertheless, I enjoyed the series for what it is: a warm nostalgic and folksy meditation on Route 66 and how it represents the best of Americana. I certainly now want to get out to Oklahoma City, rent a car and drive west and see the sights Route 66 has to offer in the Great plains and high dessert. Hopefully someone someday will either write a book or film a documentary about the full history of Route 66 rather than evoke the nostalgia of the Mother Road. If someone reading this user review knows of one, feel free to tell me in a comment/reply to this review.

L. C. LewisReviewed in the United States on June 14, 2018
5.0 out of 5 stars
Fun on Route 66 - hosted by renowned author and Route 66 expert, Michael Wallis!
Famous Route 66 author Michael Wallis hosts and narrates this series, it highlights many of the attractions on the old highway. We watched the series to prep for a road trip vacation on Route 66, knowing the history of towns & attractions made our vacation a lot more fun for the kids and for us! If you love Americana, history, travel, kitsch, nostalgia & Route 66, don't miss these programs.
5 people found this helpful

MidgeReviewed in the United States on September 24, 2021
5.0 out of 5 stars
This show made me happy!
In just 4 episodes, this show will make you want to travel Rt 66, the Mother Road. Soon to be a cult classic, Cruising Route 66 will forever change your views of American road travel. route 66 is a Phoenix that is about to rise from the ash.

Steve DReviewed in the United States on August 14, 2020
1.0 out of 5 stars
Boring!
Not very well done. I turned it off after a few minutes. If I heard him say "mother road" again I was going to get the TV brick out. There are better done accounts than this....just about any.
2 people found this helpful

JC HobbesReviewed in the United States on August 19, 2020
5.0 out of 5 stars
Aweome scenery!
While release date says 2006, actual filming occurred in early or mid 80's through early 90's. This is most obvious by the vehicles. The studio footage was recorded much later, as evidenced by Michaels graying mustache and hair :) Really enjoyed this series.
One person found this helpful

Mom2ScottReviewed in the United States on January 31, 2019
5.0 out of 5 stars
Great info!
Watched the whole season and loved it, very informative!
3 people found this helpful

TaffyReviewed in the United States on November 23, 2018
5.0 out of 5 stars
Very informative and entertaining
My boy and I watched the whole season and loved it! We may end up moving to Albuquerque, NM just to live on route 66
One person found this helpful
See all reviews
Back to top
Get to Know Us
Make Money with Us
Amazon Payment Products
Let Us Help You
EnglishChoose a language for shopping. United StatesChoose a country/region for shopping.
© 1996-2022, Amazon.com, Inc. or its affiliates