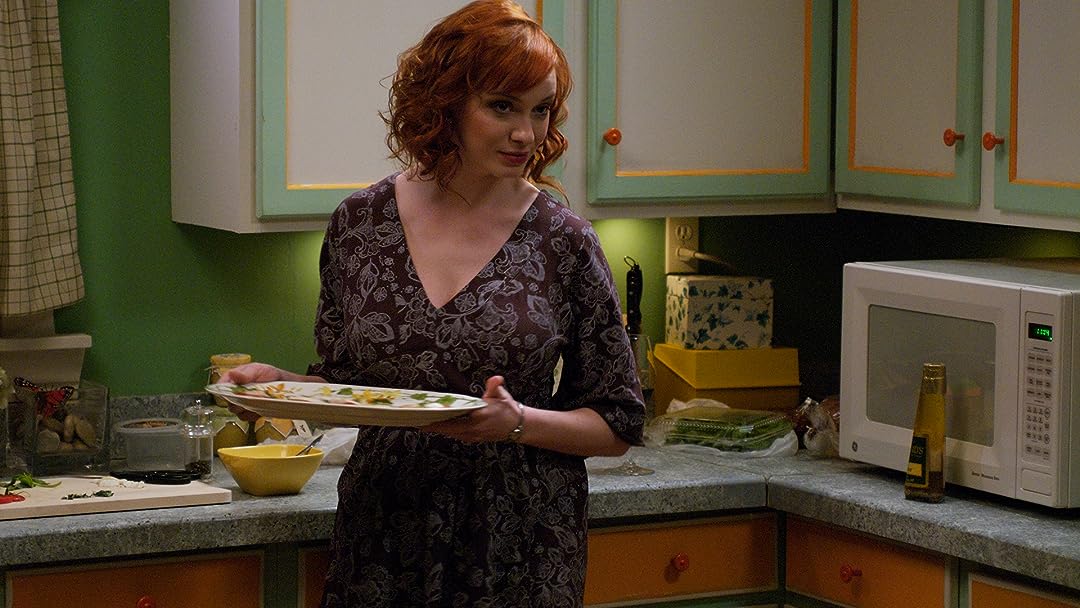 Jack E. LevicReviewed in the United States on June 22, 2012
5.0 out of 5 stars
EXPLORING RELATIONSHIPS IN LA CUCINA
Verified purchase
LA CUCINA is a delightful surprise. This little gem of a film is simple in its concept but rather profound. The film is mainly set in two kitchens as two sets of people explore relationships and feelings.

MADMEN's Christina Hendricks shines as Lily, an independent-minded career woman who has missed out on true love. Portuguese actor Joaquin de Almeida is her much older boyfriend Michael stopping by for a simple salad after a hard day. The two are an obvious match and the "salad" turns into a feast as Michael decides to do some cooking. There is an art to cooking in parts of Europe that makes a meal an explosion of color, tastes and emotion.

Upstairs, very pregnant Shelly has had an disagreement with her husband over the dinner she has made and she visits her neighbor Jude for some support and advice. Jude is the Queen of La Cucina as she makes decadently deligious pastries as she speaks earnestly to Shelly. Sweet, innocent Shelly has a kind and loving husband but insecurities and a secret are overwhelming her.

Shelly thinks that Jude has an ideal relationship with her lesbian partner since obviously women understand each other and their needs. Men just can't fully relate to women. Unfortunatley, Jude knows "perfect" relationship is not so ideal and baking seems to be her outlet for frustration.

The film starts slowly scenes of cooking. It doesn't begin to engage the viewer until the dialogue begins. The marveously insightful and well-written dialogue propels this film into something very special. The writing is crisp and compelling. It's the genuine and thought-provoking dialogue that makes LA CUCINA so special. The setting is simple and the action is minimal. It's a group of people getting to know each other better on a hot summer night.

It's clear that Lily and Michael are genuinely attracted to each other and they begin asking each other questions and each answers honestly. It's the kind of dialogue that all couples should have. They explore each other in an honest and realistic discussion about their past and their dreams. Lily doesn't always like what she hears but she is moved by Michael's honesty and sincerity. But Lily listens to Michael and respects his honesty. This man is genuine with his feelings and his words.

In the other kitchen, Shelly blames her mood and insecurities on "hormones" from her pregnancy. Jude is the enlightened one in this movie and sees deeper. Guys, there is one thing to learn from this film. If your wife tries to bake something that kind of resembles a lasagna, it might not be a wise idea to suggest giving her a break by ordering a pizza. It's a classic slice of life as conflicts arise from common misunderstandings. The husband thinks he is helping and the wife feels unappreciated. Tensions in relationships are often fueled by a simple yet burning lack of communication.

The story is about relationships and La Cucina is beautiful in its simplicity. LA CUCINA gives us spiritual food for thought. The kitchen is the life of a home. Enjoy the beauty of life.

LauraReviewed in the United States on January 20, 2019
5.0 out of 5 stars
slow moving plot
Verified purchase
Fairly good movie. A Great performance by Oz Perkins. The plot is slow moving but explores many different topics regarding relationships.

MarkReviewed in the United States on January 6, 2017
4.0 out of 5 stars
Four Stars
Verified purchase
Great conversations and insight.
One person found this helpful

stargazerReviewed in the United States on December 7, 2009
5.0 out of 5 stars
Great movie & the food looks fantastic!
I saw this on Showtime & I can't wait to get my copy! It's a great little movie that explores relationships with no limits! I heard it won a lot of film festivals! I absolutely recommend it! The acting is fantastic!
7 people found this helpful

stargazerReviewed in the United States on January 8, 2010
5.0 out of 5 stars
Great with food & a lover or your girlfriends
Food, relationships & wine! What's not to like! A no holds barred film about relationships that will inspire conversations with your friends and your lover! Loved it and will watch Again!
One person found this helpful

FriendReviewed in the United States on February 6, 2012
5.0 out of 5 stars
Lovely
Beautifully shot, well done. The dialogue was well-written, realistic and relatable. Pop open a bottle of red wine and enjoy.
One person found this helpful

Deborah G. HanifanReviewed in the United States on December 8, 2009
5.0 out of 5 stars
La Cucina
I saw this on tv the other day! I LOVE IT!!! It is a must see and must have in my book. I cannot wait for this to come out. They did such an amazing job making this movie! I want more!!!! I cannot wait till I get mine!
6 people found this helpful
See all reviews
Back to top
Get to Know Us
Make Money with Us
Amazon Payment Products
Let Us Help You
EnglishChoose a language for shopping. United StatesChoose a country/region for shopping.
© 1996-2022, Amazon.com, Inc. or its affiliates