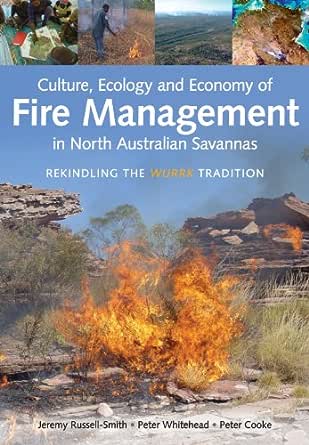 Flip to back Flip to front
Audible Sample Playing... Paused   You are listening to a sample of the Audible narration for this Kindle book.
Learn more
ISBN-13: 978-0643094024
ISBN-10: 0643094024
Why is ISBN important?
ISBN
This bar-code number lets you verify that you're getting exactly the right version or edition of a book. The 13-digit and 10-digit formats both work.

This engaging volume explores the management of fire in one of the world’s most flammable landscapes: Australia’s tropical savannas, where on average 18% of the landscape is burned annually. Impacts have been particularly severe in the Arnhem Land Plateau, a centre of plant and animal diversity on Indigenous land.

Culture, Ecology and Economy of Fire Management in North Australian Savannas documents a remarkable collaboration between Arnhem Land’s traditional landowners and the scientific community to arrest a potentially catastrophic fire-driven decline in the natural and cultural assets of the region – not by excluding fire, but by using it better through restoration of Indigenous control over burning.

This multi-disciplinary treatment encompasses the history of fire use in the savannas, the post-settlement changes that altered fire patterns, the personal histories of a small number of people who lived most of their lives on the plateau and, critically, their deep knowledge of fire and how to apply it to care for country. Uniquely, it shows how such knowledge and commitment can be deployed in conjunction with rigorous formal scientific analysis, advanced technology, new cross-cultural institutions and the emerging carbon economy to build partnerships for controlling fire at scales that were, until this demonstration, thought beyond effective intervention.

The Amazon Book Review
Book recommendations, author interviews, editors' picks, and more. Read it now.
Create your FREE Amazon Business account to save up to 10% with Business-only prices and free shipping. Register today

"The book takes a multidisciplinary approach to fire management in northern Australia... One issue that the book addresses specifically is taht the Australian approach to fire management has been shaped by experiences in the more populated areas of the nation, and in the urban-wildland interface. The savannas are sparsely populated, so some of this experience must be altered or discarded to enhance the cultural and ecological treasures of the north." (Natural Hazards Observer) --This text refers to the paperback edition.

Jeremy Russell-Smith is a consultant ecologist with 25 years’ experience in northern Australia. He coordinates fire research programs for the Tropical Savannas CRC and works on other natural resource management projects in South-East Asia. He has an abiding interest in the ecology, biogeography and management of monsoon rainforests and sandstone heaths. He often works with Indigenous people on landscape and resource management issues.

Peter Cooke Peter Cooke has worked in the Northern Territory as forester, journalist, program manager with the Northern Land Council and a number of other roles. He presently works as Chief Executive Officer of Wardekken Land Management Limited, an Indigenous corporation that plays a major role in management of the Arnhem Land escarpment.
--This text refers to the paperback edition.