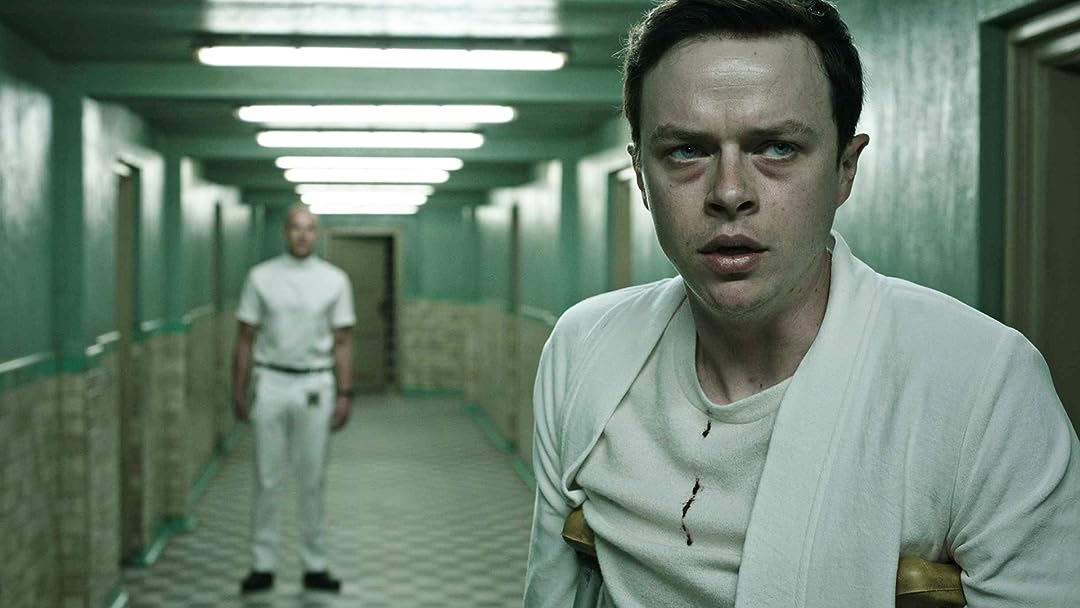 A Cure for Wellness

(2,454)
6.42017X-RayR
From the visionary director of The Ring, comes this psychological thriller about an ambitious young executive who is sent to retrieve his company's CEO from a remote and mysterious "wellness center." When he begins to unravel the retreat’s terrifying secrets, his sanity is tested, as he finds himself diagnosed with the same curious illness that keeps all the guests here longing for the cure.

John's Horror CornerReviewed in the United States on June 5, 2018
5.0 out of 5 stars
The Road to Wellville (1994) meets Shutter Island (2010) with a dash of Frankenstein (1931) in this strange genre-splicing film.
Verified purchase
MY CALL: Incredibly strange yet surprisingly rather coherent given its moral-testing lunacy and wispily mixed themes, this visually stunning and sanity-challenging film is worth the time of any adventurous film-goer with a strong stomach and a penchant for the unusual.

Director Gore Verbinksi (The Ring, The Pirates of the Caribbean 1-3) brings his facility for scale and cinematography to this GORGEOUS film that injects a horrific story into The Road to Wellville (1994) interspersed with Shutter Island (2010).

From its very offset we are awash with very different tones and themes. We meet a slick, ambitious young Wall Street executive who is charged by the robotically cold corporate board to venture to a sanitarium in the Swiss Alps to return the company’s perhaps insane CEO. Not 15 minutes into the film and we have corporate scandals and hints that a Frankensteinian dichotomy exists between the “villagers” and the hilltop castle-like wellness facility in a region of the world remote from modern comforts—as if spinning an admixture of present day with Mary Shelley’s historic period.

Our young exec Lockhart (Dane Dehaan; Chronicle, Valerian and the City of a Thousand Planets) discovers a Utopian treatment center with sunny Tai Chi and badminton on the lawn enjoyed by smiling patients in immaculate white robes and none with a negative word to say. So idealistic is it, that the patients seem to participate equally with the staff in hiding something as Lockhart learns more of the historic hydrotherapy facility’s dark past.

As Lockhart, Dane Dehaan is as sinister as he is charming, but more tightly wound; an excellent counterpart to Jason Isaac’s Dr. Volmer (The OA, Event Horizon) very similar performance as the charismatic facility director Dr. Volmer, who is of ever more calm disposition. As Lockhart loses control, Volmer is always there to grasp more. Not unlike Shutter Island (2010), Lockhart’s investigation soon finds himself a patient of the facility, with numerous delusions of his present echoing the haunting pains of his past.

Things get pretty weird and we end up somewhere I absolutely didn’t expect through the use of elderly full frontal nudity, complicated historical clues revolving around incest and deformed babies, a very strange masturbation scene, reality-questioning hypotheses (or hallucinations) of parasitosis and their VERY invasive means of application, rumors of science-based longevity, an unusual application of electric eels in an off-putting coming-of-age scene, and an extremely uncomfortable father-daughter moment that will likely offend many viewers. Yes, this film includes numerous perverse themes. But, no, I don’t find it exploitative. Given the cavalier inclusion of the aforementioned components, the film was approached rather tactfully. Although it is more than a bit jarring when an actress (regardless of her adulthood in reality) playing an early teenage girl (Mia Goth; Nymphomaniac Vol. II, the 2018 remake of 1977’s Suspiria) is the subject of nudity and sexual assault. So… yeah… ummm… don’t watch this with your mother or your kids.

Despite being incredibly eerie and on (frequent) occasion uncomfortable, this is truly an outstanding film.

Adam BaehrReviewed in the United States on May 29, 2020
5.0 out of 5 stars
The Evil Within 1.5!!!
Verified purchase
Wow. I loved this movie. I feel it’s like an interim dream of Sebastian Castellanos from The Evil Within series. Gore Verbinski did a phenomenal job. I’m three years late to the party, but better late then never. The story is about a Wall Street stockbroker who is tasked with retrieving the CEO from a resort in the Swiss Alps; upon entering everything starts to unravel. The acting was great with Dane DeHaan being the main protagonist. He did very good; especially since the only movie I know from him prior was The Amazing Spider-Man. The other star was the antagonist Jason Isaacs as the doctor. The action was well articulated with a few standout scenes; nothing like Predator lol. I must mention there were at least two cringe scenes that made me be like whoa. The cinematography is what really was the cherry on top; beautifully shot scenes and angles. The movie is a psychological/ suspense movie and leans heavy on its tropes, but with a great twist that many may see coming, but one surprise threw me for a loop. I normally don’t mention this, but the musical score was what created some of the cryptic layers of the film superbly. I highly recommend watching this film.
2 people found this helpful

AReviewed in the United States on September 16, 2017
4.0 out of 5 stars
Weird Mix
Verified purchase
It's hard to know what to say about this film. It is achingly beautiful, and horrifying on so many levels, many of which were levels I had no wish to be horrified on. I'd give trigger warnings, but I wouldn't know where to start. I don't know how to star-rate the movie because, except for a bit of improbable reveal, the story is as innovative as it is gruesome.

The cinematography is outstanding. Just exquisite, as are the actors. And the film allusions are adept modernizations of classic horror, which, if you like that stuff, and I do, are sweet Easter eggs. But I think there may be too much something for everyone. In any event, I recommend watching this at least once because I think it has some important things to say about modern corporate culture, family relationships, and the pitfalls of the natural wellness industry; however, more than once may be too much for some, thanks to an improbable mix of gothic sensibilities and torture porn. I saw it in the theater, then bought it on blu-ray.
10 people found this helpful

I don't see any reason for the bad reviews. I was sucked right in, glued to the screen, and the 2.5 hours went by much too fast. Plus the cinematography was awesome. It is BS any reviewer who says they saw the ending coming. No way.

Totally worth the rental fee. The only bad thing is I rented the movie, and I should have bought it. Amazon should give us an option to purchase the movie, after our rental expires, for the purchase price minus the rental fee. I would buy more movies if they did.
44 people found this helpful

Fred AdelmanReviewed in the United States on November 18, 2017
5.0 out of 5 stars
A thinking man's horror film.
Verified purchase
Gore Verbinski is an Academy Award-winning director (for RANGO) that has made some good films (THE RING remake) and some really awful films (THE LONE RANGER). I did not expect him to make a surreal film such as this. This film, even a little long at 2 1/2 hours demands repeated viewings because it has so much going on, there is no way you can catch everything. There are things that happen in the background that come to the forefront later in the film and nearly every frame of film contains scenes of water or fire (or both). I have watched this film three times so far and have picked-up on something new on every viewing. This film may not be everyone's cup of tea, but personally, I love it. This is a thinking man's film with great photography, a twisty screenplay and scenes that will make you squirm (beware of eels!). Definitely one of my favorite films of 2017.
7 people found this helpful

The Tally HoReviewed in the United States on September 9, 2018
4.0 out of 5 stars
Review without Spoilers - Pros & Cons
Verified purchase
A Cure for Wellness is a 2016 psychological horror film directed by Gore Verbinski, written by Justin Haythe, and starring Dane DeHaan, Jason Isaacs, and Mia Goth. Here are the pros & cons as I see it, I hope this helps.
Pros:
1. Overall interesting cinematography.
2. Some interesting scenes.
3. Plot is descent.
4. Mia Goth does a good job with her part.
Cons:
1. Computer special effects of accident scene is horrible and could have been simply for better effect.
2. Fight scenes are overdone and unrealistic.
3. Story is fairly predictable.
4. Editing could have been better.
3 people found this helpful

mrfReviewed in the United States on December 30, 2019
2.0 out of 5 stars
So Conflicted (possible spoiler)
Verified purchase
I wanted to enjoy this, I remember it being pitched and seeing the trailer and thinking it would be a cool movie, and it starts out that way. It's beautifully shot, the cinematography is amazing. The story is conflicted, and I feel like the writers wanted to make three different movies or three different endings but instead included it all into one movie. The movie felt overly long as well, the fact there are two false endings did not help this feeling. The way the movie does climax for the ending seemed at odds with how the movie started.
2 people found this helpful

ProvivalistReviewed in the United States on May 21, 2020
4.0 out of 5 stars
Beautiful and weird movie...
Verified purchase
This is from the guy who brought you The Ring, which is why I watched it. I really loved the setup and the first two thirds. Very weird, very interesting, I at no point had a strong sense of where it was going, in a good way. Verbinski takes his time in building atmosphere and deepening the mystery. The reveal is both unexpected and, well, a mixed bag, half interesting and half more than a little disappointing, but the movie's other pleasures--the reasonably sophisticated body horror stuff, the beautiful set and production design, the impressive weirdness--compensated nicely. Watch it!
See all reviews
Back to top
Get to Know Us
Make Money with Us
Amazon Payment Products
Let Us Help You
EnglishChoose a language for shopping. United StatesChoose a country/region for shopping.
© 1996-2022, Amazon.com, Inc. or its affiliates