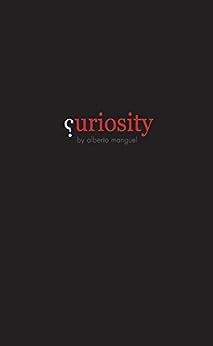 Alberto Manguel is a Canadian writer, translator, editor, and critic. Born in Buenos Aires, he has since resided in Israel, Argentina, Europe, the South Pacific, and Canada. He now lives in New York. --This text refers to the paperback edition.

‘Curiosity is a meditation on what is important … it is best taken as if part of a long, fascinating conversation with an individual whose erudition and humanity leave one largely content to listen while nursing one’s own, parallel apprehensions.’ - Stoddard Martin, Jewish Chronicle
(Stoddard Martin Jewish Chronicle 2016-07-01) --This text refers to the paperback edition.

4.3 out of 5 stars
4.3 out of 5
24 global ratings
How are ratings calculated?
To calculate the overall star rating and percentage breakdown by star, we don’t use a simple average. Instead, our system considers things like how recent a review is and if the reviewer bought the item on Amazon. It also analyzes reviews to verify trustworthiness.
Top reviews

Charlus
4.0 out of 5 stars Curioser and Curioser
Reviewed in the United States on March 14, 2015
Verified Purchase
This is an odd book. Ostensibly about curiosity, Manguel uses this concept as a springboard for whatever takes his fancy, presumably organized by themes that make the title of each of the chapters.

On top of this nominal framework, the whole enterprise is diffused through the prism of Dante's Commedia. Why? Apparently Manguel becomes obsessed with various books at different points in his life, and discovering the riches of Dante later in life, he is currently immersed thinking through that great work, and by extension, so are we.

His tangents are often fascinating, sometimes less so, often seemingly tethered by the merest thread to the topic on hand. A chapter on the representation of thought by writing veers off into the Inca way of representing thought by a series of knots organized by shape and color known as quipu. A chapter on How Do We Question concentrates on various medieval commentators on the Talmud.

This book doesn't rigorously explore the concept of curiosity so much as embody its workings in the author.The reader travels along with him on his intellectual and often literary explorations, sometimes leading to open vistas, sometimes down a cul-de-sac. This is a frequently enlightening, usually entertaining journey, so long as there isn't any place you are in a hurry to get to.

N.B. I've been assured no cats were killed in the writing of this book.
Read more
47 people found this helpful
Helpful
Report abuse

Alexander P. Waugh Jr.
5.0 out of 5 stars Dante and much more
Reviewed in the United States on May 19, 2016
Verified Purchase
Although the core of the book is Manguel's interpretation of Dante's Commedia, the author ranges over a variety of wider topics which he eventually relates to Dante. He relates his life experience to the larger questions raised by Dante. For me, it was the sort of book that articulates more clearly thoughts floating around in my less organized thoughts. At the same time, it expands on them and provides a firm basis for further thoughts. An excellent read!
Read more
4 people found this helpful
Helpful
Report abuse

Katherina
5.0 out of 5 stars Five Stars
Reviewed in the United States on April 22, 2016
Verified Purchase
Knowledge acquirement through the centuries before your eyes!!!
Read more
Helpful
Report abuse

Roman
5.0 out of 5 stars Very nice book
Reviewed in Germany on July 21, 2015
Verified Purchase
The book is sometimes a hard read as the author jumps around in Dante's divine comedy. The ideas he writes about on what it is that drives the human mind (curiosity) and how he puts Dante in perspective with earlier and later literature is just marvelous.
Read more
Report abuse

Klara
5.0 out of 5 stars I Like this
Reviewed in Canada on June 8, 2018
Verified Purchase
Thank you! I Like this book
Read more
Report abuse

Nameless
5.0 out of 5 stars Five Stars
Reviewed in Canada on April 18, 2016
Verified Purchase
The dumb bells were exactly as advertised and exactly what I wanted. Thank you.
Read more
Report abuse
See all reviews