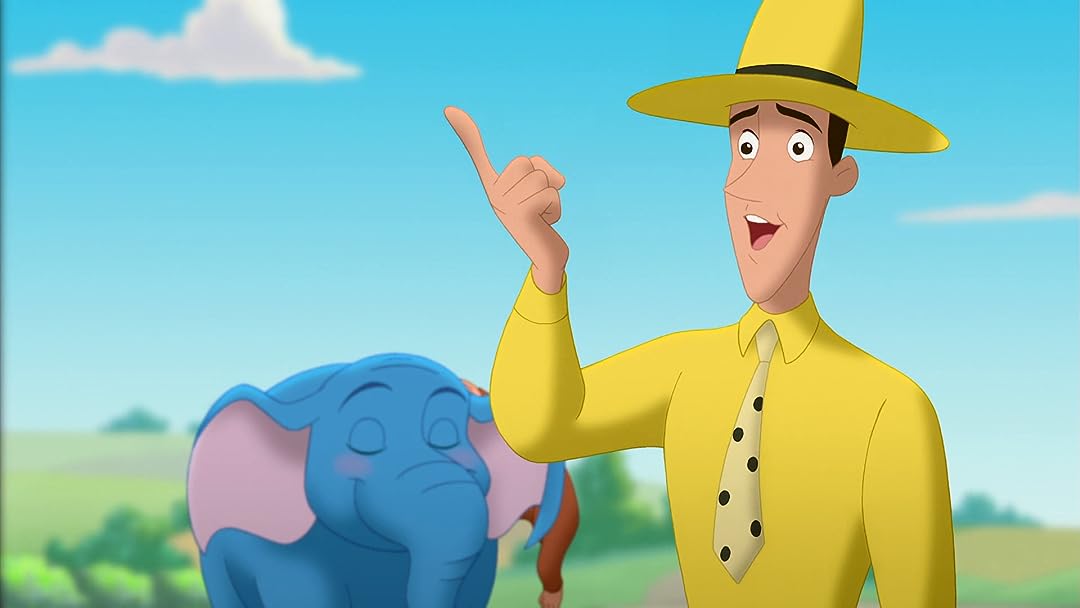 (1,402)
5.51 h 20 min2009X-RayG
Curious George is back in an all-new feature-length movie! Join George and The Man with The Yellow Hat on a madcap cross-country adventure to reunite Kayla the elephant, with her family.

researchhoundReviewed in the United States on April 22, 2022
4.0 out of 5 stars
Reverts to Good Guys/Bad Guys format
Verified purchase
Our grandson loves the Curious George TV shows and movies. This one is okay but does resort to having a villain in it, something the others manage to avoid. Still, it is better than much of the kid oriented videos out there.
If you want a better one, try the Boo-Fest Halloween movie. Clever songs and a much better story. Our grandson would watch it back to back if we let him.
All in all, the CG tv shows and movies are enjoyable to watch, even for us adults. Perhaps that’s because Ron Howard and Brian Grazier are producers.

CEReviewed in the United States on August 24, 2015
5.0 out of 5 stars
Entertaining with some pretty funny parts in the movie! Kids loved it!
Verified purchase
I bought this and Curious George 3 at the same time because they both aired on PBS last week. My oldest just started school so he had to miss them and this was a "reward" for making it through his first ever week of school. I had only promised him the 3rd movie, but it seemed so strange to have the 1st and 3rd movies without the 2nd one, so this made it into the cart as well. It was a good thing, too! The kids ended up liking this one better than Curious George 3. Although both movies are entertaining, this one has a part where George is teased by the "bad guy" and George ends up getting what he wants... basically because he's a monkey. For some reason, the kids LOVE that part. They laugh like crazy and ask how George did it.

The "bad guy" isn't really a bad guy but more of a guy that you just REALLY don't like because he does everything bad and uses inaccurate or incomplete information to make a bad decision.

It was a little weird seeing Ted put work ahead of George, though, and although the story line was trying to teach kids about the importance of loved ones, etc., I don't know if my kids completely understood the reasoning of why Ted was even preoccupied with work to begin with. (My kids are pretty young.) The journey was fun and entertaining, though, which is what I was expecting from the movie. There really wasn't anything scary in it for the kids (although I was very surprised at the scene with Ted chasing after the train... the kids seemed to expect a happy result so they weren't shocked in the least)... and obviously you don't have to worry about bad words or inappropriate scenes. So... good movie overall.

Kasey K.Reviewed in the United States on October 17, 2011
5.0 out of 5 stars
Great movie, don't waste your time with the 1-star reviews
Verified purchase
This is a really good kid's movie.
In the first movie, The Man With The Yellow hat's voice is done by Will Ferrell, and in this one it is done by the same voice as the PBS series. I think it is better that that way for the sake of continuity.
As for the Man's behavior, isn't it only appropriate that he is stressed out over his current work situation and the fact that his monkey wandered off with an elephant on a train headed for California? Kids see us (adults) handle life's stress and can relate to how George feels as he has to deal with the Man's stress. I don't think he lashes out at George or "freaks" out any more then the average, NORMAL, adult.
My three-year-old has watched this movie over a hundred times and has never once asked me about what kidnapping or murder is, but when he does, I will respond with the truth, since these things do happen in real life, why not deal with it when the source is a harmless movie?
In response to the "talentless band" who preforms the music for this movie, I think they are great. The songs are appropriate for the feeling of each scene and are really very good. So they aren't "mainstream" but they are good.
Over all, I think this is a wonderful movie for any child who enjoys the PBS series.
4 people found this helpful

KristyReviewed in the United States on December 13, 2021
5.0 out of 5 stars
Yes buy!
Verified purchase
Love this movie 🥰(my kids too) 🤪omg that part where hes on the phone w the operator in a bunch of languages and cant get thru 😄 yes buy this movie ! Shipping was amazing😃 express🙃👍👍🤜🤛

Adriana MartinezReviewed in the United States on November 29, 2012
5.0 out of 5 stars
IT'S GEORGE!!!
Verified purchase
I would like to say I LOVE this movie and i probably did the first 10 times i HAD to watch it but now i try to hide the DVD. I bought this movie for my 2yr old and it was an instant hit her previouse favorite movie (Dispicable Me) went back on the shelf and now she will not watch anything else but "geoge". What I really loved about the DVD is that I'm trying to teach only spanish to my daughter and this video has the spanish track so it was perfect for me. She has watched this movie so much that the disk is already scratched so I will be ordering a new one soon. It's the perfect little story, she loves George, Kayla and all their "travesuras" (Mischief) I would definitely recomend this DVD to anyone looking to entertain their little ones. Just a word of caution my daughter loves to imitate George so she goes around the house acting like a monkey! lol ENJOY!!

Jeff the aeroEReviewed in the United States on April 7, 2016
5.0 out of 5 stars
Pretty good for my kid and me!
Verified purchase
I have a 18mo that has only watched Daniel Tiger, and he loved this movie. We watched it in about 4-5 shifts/days where he would watch and play, or sit on my lap and watch, or watch when I needed a moment to clean up/make dinner.

As a kids show, it's one that I was able to follow and get into, though I wouldn't have watched it on my own. From this I would say it's a good recommendation for kids of most ages, (and for their parents ;)).
2 people found this helpful

Jazz's MommyReviewed in the United States on December 3, 2014
4.0 out of 5 stars
Pretty good, with one problem
Verified purchase
I liked the first one better, and the Halloween one is my daughter's favorite. This one is still really good. Fun and the animation is smother than the regular tv show. However, I have to agree with one of the other mom's reviews I saw after I purchased this. There is a scene towards the beginning that uses the word "murder." Now, it's a short scene and they don't talk about it much, but it is said once and repeated. Basically, a detective gets mad at the Man in the Yellow Hat (did anyone else know his name was Ted?) and asks if Murder would just not be a big deal and then Ted says "Murder?!" It's hard to describe if you don't know what's going on but it's one of those things where if you didn't have kids you probably wouldn't even pick up on it and think it's completely g rated, but then when you have kids you realize, "oh, my child is going to either repeat the word or start asking what it means" and then you wonder why they even put that line in there for such an innocent film? It's a line that could have been take out and was not necessary at all because nothing even remotely close to a murder or death in general is in the movie at all. Overall still a good movie, but they just shouldn't have put that line in the movie.
5 people found this helpful
See all reviews
Back to top
Get to Know Us
Make Money with Us
Amazon Payment Products
Let Us Help You
EnglishChoose a language for shopping. United StatesChoose a country/region for shopping.
© 1996-2022, Amazon.com, Inc. or its affiliates