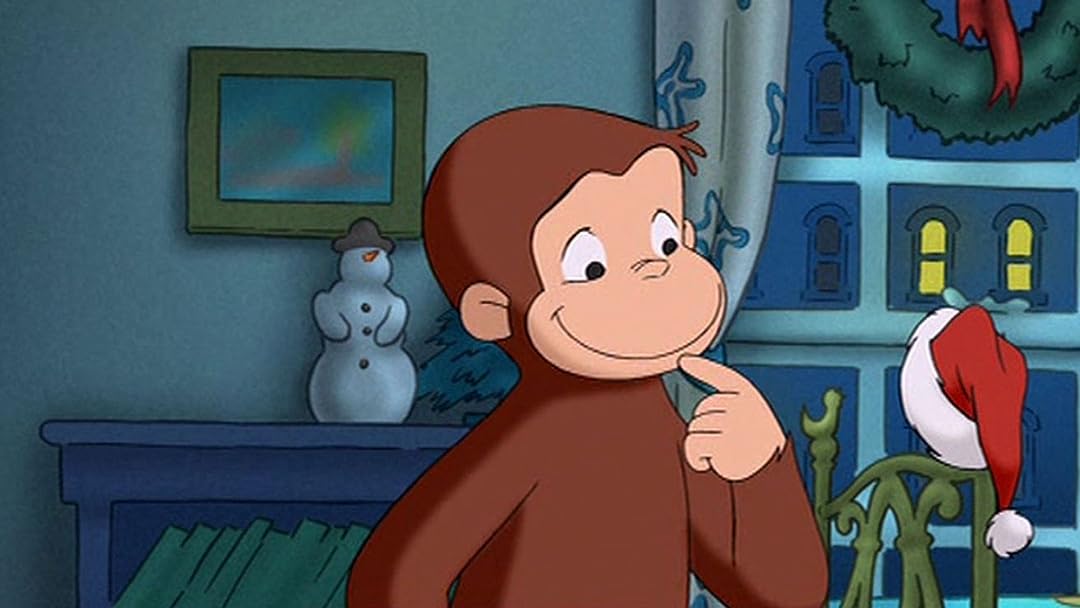 (1,665)
6.358min2009X-RayALL
George and The Man In The Yellow Hat are having a merry time counting down to Christmas. But neither can decide what to give each other. Will they find the answers before Christmas morning?

w4shepReviewed in the United States on January 7, 2020
5.0 out of 5 stars
Curious George is a Kid Classic!
Verified purchase
What child doesn’t like the precocious and cute monkey, Curious George? Mine sure do!
As a father, I like that these books haven’t been updated, reimagined, or edited to remove the politically incorrect parts. Like in his first book. It’s ok that George sometimes gets thrown in jail for his bad behavior (teaches kids to be responsible for their own actions) and that he occasionally has an after dinner smoke with a pipe before bed. Wait... what?? Well maybe that part could be altered to a bubble pipe. My kids did notice that one and I did tell them it was a bubble pipe and George was just learning and that’s why his “bubbles” looked like black smoke. But again, that’s not in this book.
Here is a charming tale of George making a Christmas list that initially confounds the man in the Yellow Hat. Disappointing George in the process.
SPOILERS:
That is until the Man in the Yellow Hat thinks like a monkey and finally “gets” what is in George’s very clever list. Now I won’t ruin the ending, but it is sweet and lets George know that he is loved by his new family.

KayReviewed in the United States on October 16, 2019
5.0 out of 5 stars
Really sweet movie and we watch it all year
Verified purchase
I absolutely love watching this with my 2 year old! He has a speech delay so it’s actually quite similar to the theme of the story- where he can’t understand his monkey. But at the end he realizes he understands him better than anyone else could! Brings tears to my eyes! My son also love reinacting when the Christmas trees fall at the field. The only thing I don’t like is the ending which is a little creepy with the “ghost of Christmas past” type character. But I’m sensitive to stuff so no one else would probably notice
2 people found this helpful

E. HoffmanReviewed in the United States on April 16, 2013
5.0 out of 5 stars
Merry Christmas George
Verified purchase
I am so sick of the programming on Disney Channel teaching my boy that if you want to get down from a tree you need a giant piece of celery to slide down. We try and give our child other things to do, but the reality is that sometimes it is just more appropriate to let him watch some TV...if you can stand the agenda of the people making the programs.

Then we ran across Curious George and were relieved. No agendas, no politically correct subject matter, no illogical logic. The first time we watched one it was like taking your shoes off after a long walk on a summer day...aaahhhh.

To top it off, each DVD only costs around $10. I ended up buying 10 different titles and have been happy with every one...thus I will copy and paste this review on each one of them.

This is one happy dad who loves that annoying monkey.
5 people found this helpful

ArleenReviewed in the United States on February 3, 2011
4.0 out of 5 stars
Don't spend the extra money for the "Bonus Holiday CD"
Verified purchase
This isn't the most creative Curious George story, but what's not to like about Christmas and a monkey? There are no bonus episodes or extras on the disc, though, so the DVD ends up being a little pricey for 58 minutes of George.

The twelve days of Christmas
We wish you a merry Christmas
Deck the halls
Hark! The herald angels sing
Joy to the world
Jingle bells
Silent Night
Here we come a-wassailing
O come, all ye faithful

Windows Media Player identifies the disc as "A Very Gilly Christmas" by Saturday Night Live but, alas, that is incorrect.

Pick up the DVD used and you'll be just fine.
5 people found this helpful

BriggieReviewed in the United States on September 28, 2020
5.0 out of 5 stars
Great price
Verified purchase
Adding to my 5 year old grandsons DVD collection. He love Curious George. i prefer digital, but he just loves holding the box, looking at it, opening it so i got it for him.
2 people found this helpful

M. KellyReviewed in the United States on December 25, 2020
5.0 out of 5 stars
Family Tradition
Verified purchase
This is a family favorite. My kids grew up on George, and we used to watch this every day on the last day of school before winter break. Now that they’re tweens/teens, we’ve had a bit of nostalgia, and had a hankering to watch it again. They were so happy with their early Christmas present on the last day of school. Cocoa and George were the perfect afternoon.
One person found this helpful

PaceReviewed in the United States on December 28, 2012
4.0 out of 5 stars
Cute movie with decent message
Verified purchase
I had been looking for a Christmas movie for my daughter to enjoy, that wasn't all about Santa and presents, this one mostly fits the bill. Santa isn't heavily featured (I actually don't remember a single Santa reference), though the main plot is about presents. The man with the yellow hat is trying to figure out what George wants for Christmas is wondering if George would have been happier living with someone else. But, he is less worried about the THINGS, and more worried about his relationship with George. Also, in the side stories many of the characters make their presents, putting a lot of thought, effort and creativity into the process. A good message I think, to avoid materialism and focus on something that you know would mean a lot to someone.

The songs are cute, and everything blends in well with the Curious George television series.
3 people found this helpful

Jeremy McMillianReviewed in the United States on November 18, 2020
1.0 out of 5 stars
Not the original....
Verified purchase
We are SO disappointed in the remake of this movie! Curious George Christmas used to be a favorite in our home. Now, it's filled with Santa and has lost its spark as a Christmas movie.
One person found this helpful
See all reviews
Back to top
Get to Know Us
Make Money with Us
Amazon Payment Products
Let Us Help You
EnglishChoose a language for shopping. United StatesChoose a country/region for shopping.
© 1996-2022, Amazon.com, Inc. or its affiliates