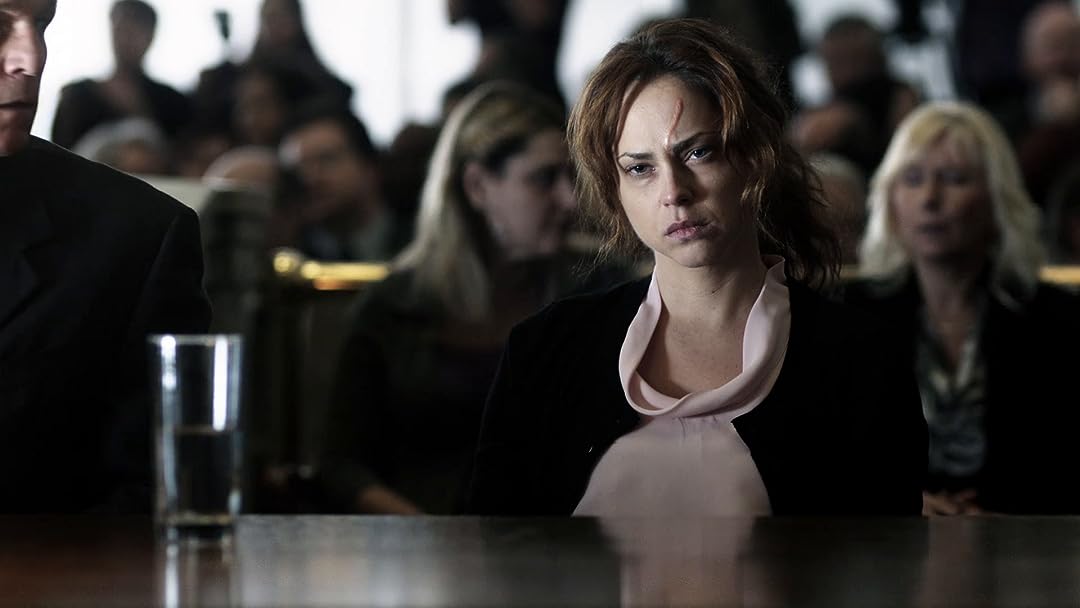 (2,560)
5.61 h 35 min2013X-RayR
Following her mother's mysterious death, a woman begins to suspect that the talking, red-haired doll her visiting niece has been playing with may be the key to the ensuing bloodshed and chaos.

BackToGoodReviewed in the United States on November 18, 2018
4.0 out of 5 stars
Surprisingly good!
Verified purchase
As a huge fan of horror movies and the slasher sub-genre in particular, I honestly never cared about the Chucky/Child's Play franchise. The idea of a killer doll just didn't appeal to me. But having watched the Annabelle movies in the Conjuring franchise recently, I've come to see that creepy dolls can be frightening as much as full grown intimidating men. I only half paid attention to the early movies of the Chucky franchise and I know that as time moved on, they got really silly and cheesy, but this soft reboot CURSE OF CHUCKY (2013) is a keeper!

Curse of Chucky plays it dead serious throughout it's runtime, while sprinkling in some witty dialogue and relatable human characters and situations, thus investing the viewer in the experience. The suspense and pacing is very well done. The acting good, especially by star Fiona Dourif (daughter of Brad, the voice of Chucky and who also played his human counterpart Charles Lee Ray in the original 1987 film) as Nica, a disabled yet sporty young woman. The young actress playing her niece Alice is really good too, a charming kid that not self-consciously annoying like a lot of movie and TV kids characters. Nica and Alice make me root for them. The other actors playing Nica's older sister and brother-in-law (Alice's parents), Alice's nanny, and the priest are solid as well.

My favorite element of this update is how there's an strong undercurrent of paranoia from Nica's viewpoint. Is she losing it? Or is it really the Chucky doll committing these criminal acts? The writing does a commendable job having the characters act and react the way normal people would, thus why they are all relatable. My favorite scene was the suspenseful dinner sequence. Very well shot and edited. And once the movie gets going, it never lets up. One of the better horror movies I've seen in a while.

AvmechReviewed in the United States on November 23, 2021
3.0 out of 5 stars
Nowhere near as good as the next one, Cult of Chucky.
Verified purchase
Over 2,200 reviews? For this?!
I missed this one somehow and bought Cult of Chucky first. I gotta say, Cult is brilliant with its mix of horror gore humor and insanity. With references to One Flew Over The Cuckoo's Nest... Even the music score references other horror films (The Shining, Suspiria, Dany Elfman's unmistakable carnival from hell). Not to mention the fact that while being straight up gorgeous, even without makeup, Fiona Douriff turns in a flawless natural acting job that helps to makes it all somewhat believable.
But to the film in question, The Curse Of... was this really written and directed by the same guy?!
We're talking night and day here.
No character development what so ever. Nica is the only one I was rooting for where as I was just impatiently waiting for the other bland characters to "get it," my only interest was how and which one in what order.
I also have to say, much as it pains me, that Fiona turns in a really bad overacted performance... but, then again, she had almost no good material to draw from.
And the living Chucky flash backs could not hide Brad Douriff's advanced age.
As a horror fan and a Chucky fan I felt let down, I give it 3 stars because I'm a fan, but if I were an "outsider" this would barely be a 1.

megReviewed in the United States on October 3, 2017
5.0 out of 5 stars
I liked this movie
Verified purchase
I read some of the negative reviews and I was a little surprised at these so called die hard child's play fans. They said that a lot of this movie wasn't realistic well if you actually saw the other movies you would know that none of the murder scenes where realistic.. tha's just how the child's play movies where and apparently are. Now I would never go as far as to say that is was as good as the first few Chucky movies ( that would be almost iligal) but I did think it was a good addition to the franchise. I liked getting the a back story on Charles Lee ray. I do recommend this movie and am happy that I have it in my collection
7 people found this helpful

PlanetHellReviewed in the United States on October 25, 2013
5.0 out of 5 stars
Terrifying, errie, disturbing-the best Child's Play film since 2, if not 1...
Verified purchase
In a time where evil dolls just aren't cool anymore, studios have "Curse Of Chucky" going directly to dvd. But this film is far superior to at least 3 of the series sequels, if not all of them.

This movie begins with "Chucky" being sent to what would seem to be a random location/family. Of course, bodies pile up. Something that really works is Chucky's "friend til the end" being a girl, and that out of a whole suitcase of random dolls, she likes him the best. But they don't play the rehash card-she isn't right there, being ridiculed and blamed for everything...

Chucky's "Curse" isn't revealed quite as much as one would hope, but how he ended up in that toystore is explained in full, and just how crazy he was b4 becoming a killer doll is also explained. This is his connection to this family.

By all means, it is scary, suspenseful, and disturbing, like the films were prior to "Bride." I liked Bride, but it was a little silly at times, and "Seed" was just stupid. This isn't like them at all, even though SPOILER ALERT! "Tiffany" does show up and while it's a small role, it really brought the movie full circle, and allowed everything to make sense while not being plaqued by "Seed".

If I have to rate this in the series, it's definitely better than the terrible "Seed," as well as the rather poorly made "Child's Play 3," and despite the fun it's still better than "Bride." I'd compare this to the levels of horror "Child's Play 2" had, and honestly, it's just as if not more creepy due to the use of modern tech. And when I say modern tech, I mean better animatronics. This should've been released to theatres. I look forward to another film if it's half as good as this one.

Any fan of Child's Play must see this, even if you hated the last three (3, Bride, Seed) or loved them all (besides Seed, maybe). This is what Child's Play is meant to be.
16 people found this helpful

Paula D. ThomasReviewed in the United States on December 16, 2013
5.0 out of 5 stars
The Killings Continue - Innocent people are blamed. Bad Bad Chucky
Verified purchase
Fiora Dourif, the daughter of Brad Dourif, the voice of Chucky, did an excellent job protraying a paraplegic. If I didn't know better I would have thought she really was paralyzed. Hopefully we will see her in even more movies - outstanding acting by her and A. Martinez, even though his part was relatively small. Chucky sure has gone through some facial changes since Child's Play 3. Even with the scars and stitches, he has an even more menacing look. I would like to know why the Play Pal company keeps putting this doll back together? I don't get that. Of course, Chucky keeps getting away with a lot more killings and innocent people who are trying to stop him get blamed for them, tried, and convicted to an insane asylum. I liked it after Fiora got sentenced in court and the Chucky doll was on the evidence table,she wheeled by it in her wheelchair and taunted Chucky that she was still alive. Then she gave a little evil laugh. I also enjoyed her taunting Chucky about his failure in never being able to kill Andy. Chucky got real PO'd about that. There is a surprise on the DVD after all the credits have run (unrated version) that picks up on action 6 months after the mayhem in this movie but I won't spill the beans. Needless to say, I anticipate this will not be the last we see of Chucky, Andy, and maybe not even Fiora.
3 people found this helpful

PankReviewed in the United States on March 13, 2021
5.0 out of 5 stars
Creepy and Fun to watch
Verified purchase
There is excellent directing in this movie. The suspense is great throughout the whole film, and you will never be bored. This Chucky is genuinely creepy, and has less comedy than the previous films, but he is still the Chucky we know and love. Death scenes are all fun and gory. The main protagonist is very likable and you want to see her make it.

Rebekah PlantzReviewed in the United States on March 18, 2014
2.0 out of 5 stars
Disappointing.
Verified purchase
I was so excited when I discovered that another (real) Chucky movie was coming out that I pre ordered it. When I finally got around to watching it I have to say that I was more than a little disappointed. The movie had some very annoying characters (which I was rooting for to die) and they totally ruined Chucky with special effects. The animation made him look so fake that it took away from all the scariness of the Chucky I remember. While I did like the ending (the very end), overall I just wasn't feeling the movie. If they would have left Chucky alone and not used special effects the movie would have been so much better; even with the annoying characters.
7 people found this helpful

Jeffrey J. SmithReviewed in the United States on September 27, 2013
5.0 out of 5 stars
Movie review, not for bluray... (sorry I am being one of those people)
Verified purchase
Watched this to nights ago. Was excellent, back on par as to how they should have been. Definitely watch after credits, nice little surprise. The whole time I was wondering where this movie was taking place, after the 3rd, 4th, 5th. I kept wondering the whole time, SPOILER-ish it does take place after seed of chucky. This was such a fantastic film, made me jump a few times, which hasn't happened lately at all during a horror/thriller/suspense type movie. I'm still not sure how much I like CGI (at times) Chucky, but it was a great direct to video movie, you get a little more back story on Charles lee ray also. Check it out if you are a fan of the series. It does have a few goofy moments, but whats a chucky movie without them, as long as they are kept in line.
2 people found this helpful
See all reviews
Back to top
Get to Know Us
Make Money with Us
Amazon Payment Products
Let Us Help You
EnglishChoose a language for shopping. United StatesChoose a country/region for shopping.
© 1996-2022, Amazon.com, Inc. or its affiliates