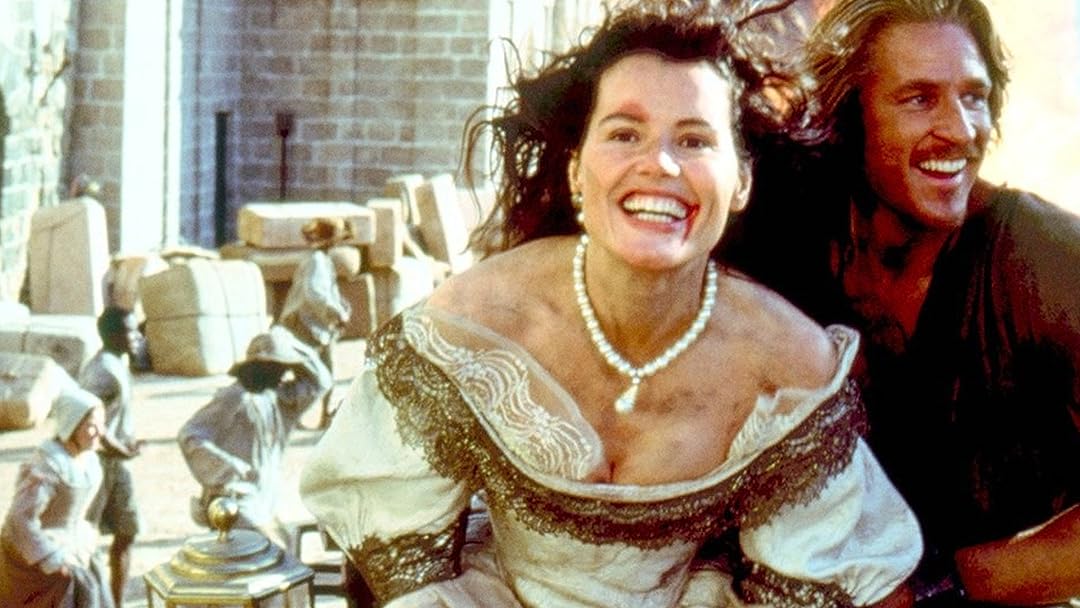 BelladoniReviewed in the United States on April 28, 2019
5.0 out of 5 stars
Sassy pirate queen. Non-stop action entertainment w/ sumptuous period costuming/sets.
Verified purchase
This is a wonderful film if you want pure escapist, fun action entertainment instead of the dour dystopian movies so common lately. It’s puzzling how such a great, entertaining movie could get so much bad press. After reading the negative reviews I had to counter their attacks because Geena Davis, who plays Morgan, ROCKS as the charismatic pirate queen, Morgan--an empowered woman in a man’s world whose quick whit immediately puts the rogues she encounters in their place right from the get-go where, in the opening scene she informs the Lieutenant she just slept with who holds her at gun point threatening to turn her in for government bounty that, “Oh, by the way, that won’t work (showing him the round slugs she emptied from his gun). See, I took your balls.” Then, with a glance at her pet monkey she snaps her fingers, he jumps onto her shoulder, and she’s off galloping along the beach en route to save her father. She’s gorgeous, full of sass, and sooo much more entertaining than the slurring, somewhat effete drunken character of Jack Sparrow. It’s easy to see that a great deal of thought, detail and finance was put into creating a believable, authentic, sumptuous period film set in the 17th century with exquisite period costuming and sets, elegant horse-drawn carriages and authentic-looking pirate ships with all the riggings. In addition, the pacing is great, with non-stop action in pristine Carribean-like settings (although it was actually filmed in Malta and Thailand). I read that Geena Davis did her own stunts, which is astonishing given how demanding they were. Her character is similar to the female action character Laura Croft, but warmer, more playful and with a much more interesting wardrobe! Kudos to Geena Davis and to a thoroughly entertaining film that didn’t get the acclaim it deserved.
23 people found this helpful

P. E. SmithReviewed in the United States on May 4, 2019
4.0 out of 5 stars
Much better in WIDE SCREEN format
Verified purchase
Not certain as to why this film gets such poor ratings overall but this format is small on our 60" plasma TV.
So the film buried Corolco and went horribly over budget but this was the Pirates of the Caribbean of it's day.
Did you know that Disney bought up all the props from this film and that many of them appear in the Pirates of the Caribbean Movies? Captain Dog Browns skull handled Spanish Flintlock Pistols become Barbossa's Pistols and Morgans Belt Buckle from the "I want to show you something" scene is Will Turners Baldric Buckle in the hanging scene of Jack Sparrow and later is seen being worn by Jacks Father Captain Teague...etc...
Language can be a little stilted in some scenes but the music, settings and content over all were better than any other "pirate" film of the day.

Joe RayborneReviewed in the United States on June 14, 2020
5.0 out of 5 stars
The best Ultimate incredible well-made pirate film for the 90s
Verified purchase
Cutthroat Island was a very well written directed edited cinematography acting storyline and everything will go into 1 with the most incredible action ever done Geena Davis was the most superb incredible fantastic actress it pulled out the part so well it made me and people convinced that she was really a pirate with the rest of the top cast it will put together really perform their part in a believable realistic film Cutthroat Island where's an is the best pirate film of the 90s compared to Pirates of the Caribbean GIF mm next to Muppet Treasure Island Cutthroat Island gave a realistic story about Pirates and how they lived in those days I was very impressed I'd watch the movie over a hundred times and I still enjoy watching the movie over a hundred times I still enjoy the movie Geena Davis pulled it off made it so realistic it was very impressive with the cast and crew they did a job that would be on what I can never see hey taxi pirate honoring her father's will she took the crew out to find the treasure and that Adventure was amazing with plenty of action strong storyline very well put together however I wish they came out with Cutthroat Island 2 that I still enjoy watching Cutthroat Island great job Geena Davis thank you cats and crew for a job well done you have my 10 Stars the best pirate film that the 90s very well put together thank you for your entertainment keep making more pirate movies
6 people found this helpful

Roberta G.Reviewed in the United States on July 16, 2017
5.0 out of 5 stars
Eat your measly black guts out, Jack Sparrow! Morgan (Geena Davis) makes a GREAT pirate captain.
Verified purchase
OK, wandered over to Amazon Prime when Netflix went down and decided to give this a try. Sure, there are a few problems, but this is the perfect movie for a lazy weekend afternoon. It’s a simple typical pirate story line and the dialog does tend to get corny and drag at times, but picks up. The score is appropriately nautical although at times a trifle overpowering. Lots of realistic fights scenes and fantastic explosions. The first major chase with the carriage is FUN, involving lots of leaping, somersaults and running across buildings, interspersed with punches, kicks and sword play. Langella is wonderful as the evil uncle and who doesn’t adore Shayna? The ending is superb: “Bad Dog.” BOOM! My one pet peeve as a biologist: when Langella squeezes a spider to death, gobs of red blood drip down his fingers. Spiders don’t have red blood – it is hemolymph, which is pale blue to blue/green.
12 people found this helpful

HansReviewed in the United States on December 5, 2018
5.0 out of 5 stars
Best pirate movie ever!! NO CGI.... Explosions galore. Epic movie.
Verified purchase
The best pirate movie ever. Im watching it with my daughter and wide now. Movie plays great. Shipped fast. Great price.

By far my favorite movie. Bad publicity, bankrupcy, a mafia loan, and public disdain for females in action roles in 1994 made this movie fail at the box office.

Every scene is action packed with great swordfighting and decent acting. If you read pirate novels as a kid this book is a pleasnat reality of the fictitious life of pirates we all dream we are, without all the CGI and over the top unbelievable costumes and scenarios of Pirates of the Caribbean.

Great movie. A classic "fight club" style movie. One day it will get its due.

Lochlan LongstriderReviewed in the United States on September 27, 2016
4.0 out of 5 stars
Bring on the special features ye, stingy scallywags
Verified purchase
I have wanted to see this for a long time as I missed it when it first came out and avoid watching it when I catch it half-way through on TV. I enjoyed it despite all of the negative reviews it has gathered over the years. Frank Langella steals the show as the villain. My only complaint is the lack of special features. Not even a dialog track with the director... just a trailer. Geena Davis appears to do many of her own stunts and is quite the athlete. Now I understand how she actually thought she could compete in the Olympics in archery.
9 people found this helpful

Susan Z. SwanReviewed in the United States on October 24, 2015
4.0 out of 5 stars
Geena swashbuckles her way into a classic pirate film.
Verified purchase
While this may not be on the list of best films ever, it is so much fun! I'm a fan of classic swashbuckling, from Doug Fairbanks to Errol Flynn and beyond, and certainly see Geena Davis as a worthy member of that swashbuckling society. The plot is no more ridiculous than any other great pirate film. It has some expected elements (the monkey, the jolly roger, an attack on Port Royale) and it adds a few creative elements of its own, such as the three-part map. The romantic angle works with Matthew Modine and Frank Langella is an superb villain. This movie had a reputation for being one of the biggest flops ever, but that was less about the film and more about poor money management by the production and direction team. If you like pirate movies and empowered women, you'll definitely want to give Cutthroat Island a whirl.
6 people found this helpful

Emily MacReviewed in the United States on August 25, 2021
4.0 out of 5 stars
All-time favorite pirate movie...but terrible print
Verified purchase
This is one of the most underrated movies of my lifetime. Definitely one of the best pirate movies ever made, one of the most genuinely awesome female lead roles of all time, and gloriously campy. Unfortunately, this is a terrible print of the movie and I'm pretty sure I could get a better version from the Walmart $5 bin. Spend the money to get a nice print, not this garbage.
See all reviews
Back to top
Get to Know Us
Make Money with Us
Amazon Payment Products
Let Us Help You
EnglishChoose a language for shopping. United StatesChoose a country/region for shopping.
© 1996-2021, Amazon.com, Inc. or its affiliates