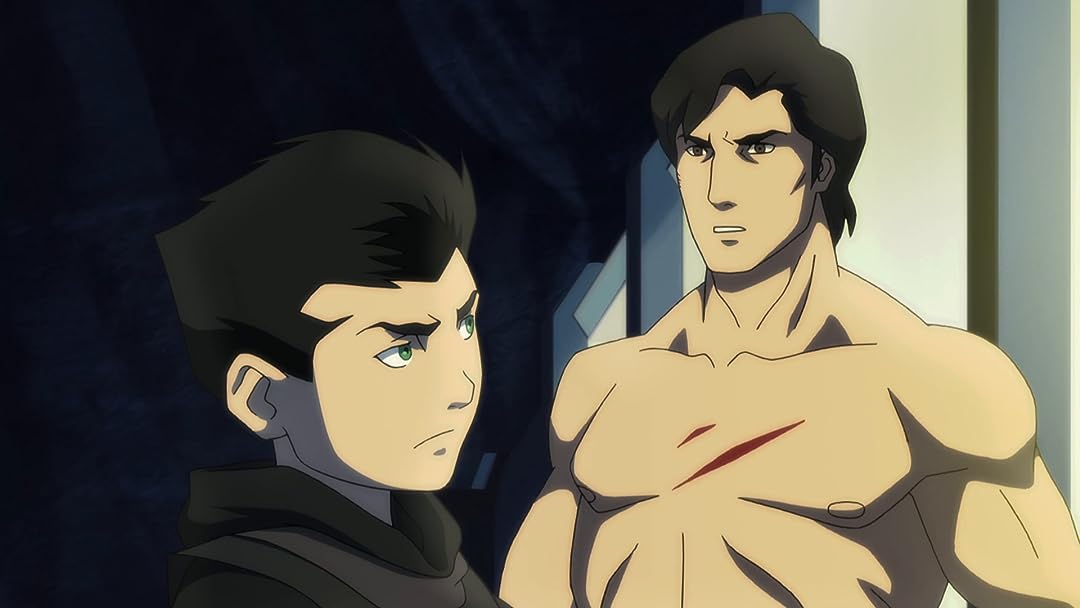 bbmReviewed in the United States on September 7, 2015
3.0 out of 5 stars
Good, but takes some compassion for the Son
Verified purchase
It was ok, as DCU movies go. I tried to keep in mind how a young person in the Damian mindset might be because, I initially got tired of him quickly. Reminded me of Jason Todd, who was irritating. Once I got to thinking of how Damian might have been looking at the world, I grew less tired of him.
The movie overall was good, but, Damian was made out to be more of a stud and stronger than he should've; especially compared to Nightwing, and stronger than he should've been when fighting the big thugs.
I would recommend it, though. I now am interested in the future development of Damian, since in the end, he seemed to understand the lessons Batman was trying to teach him.

hoarselordReviewed in the United States on May 13, 2014
5.0 out of 5 stars
Interesting movie, Batman's voice and the ending is ishy
Verified purchase
The movie was fun, a bit short like many animated Batman features, and lacked complexity of some of the other films. It definitely was not on par in terms of style, content, complexity or overall artistry with The Dark Knight Returns, Doom, JL: Crisis on Two Earths, or the Green Lantern Animated Series.

I agree with many other reviewers that the voice actor was the wrong choice for Batman and that the iconic Kevin Conroy voice is the best. This voice actor's voice has an Adam Westish goofy twinge, old man warble to it. I'm not saying it's a bad voice, just not the correct choice for the dark knight Batman.

Spoiler below:
Regarding the story, I didn't like the backstory that Batman was a rohypnol victim who was sort of date raped. That was stupid. Also, what is the motivation of Talia to 'rebuild the empire'. Where does she get the money to do it if her 3 fortresses are destroyed and their mining operations also? Does she offer a ninja assassin work study program / unpaid internship program or does she simply rohypnol them as well? And if they are working for free, do they also build their own beds and farm their own vegan buffet offerings? I think she'd have been better off marrying Bruce Wayne and then withholding sex until Batman buys her an army. Sorry if that sounds like I'm saying something bad about women, I'm not: keep in mind she's a woman without scruples anyway, but as Batman is a flawed hero (driven by vengeance he can never quench because he blames the city for producing criminal elements that killed his parents), maybe it would work as a story. As participants in a constantly-mutating, modern living myth, I think Batman fans can handle complexity of a Batman with controversial and questionable living arrangements, especially given we love the Dark Knight and his flaws.

TomReviewed in the United States on September 13, 2016
4.0 out of 5 stars
Damian Wayne: Best Robin Ever
Verified purchase
A solid retelling of the introduction of Damian Wayne as the new Robin. Damian is probably my favorite Robin of all time, and I felt this was a faithful translation of his character to another medium. It is a tad more violent than I'd expected, which is in keeping with the backstory of Damian, but I would hesitate to sit down and watch this with younger kids as I think it earned its PG-13 rating. For older viewers though, it comes across as faithful to the source material and not a watered down version meant for kids.
7 people found this helpful

Kindle Customer CoryReviewed in the United States on May 21, 2014
3.0 out of 5 stars
Probably should be about 2.5 stars at best
Verified purchase
The visual design looked good. Very similar or the same as that for Justice League: War and Young Justice. It did drift a bit too much into the anime style when it came to some of the combat scenes. That's an awful lot of power coming from the punches and kicks of a 10 year old. Somehow he's able to smack around large grown men who had similar if not the same training he had.

The voice acting was good and most of the character designs were excellent. The only ones I didn't like were for Ras Al Ghul and the Man-Bat. Man-Bat does not have batty "angel wings". His arms become giant bat wings. Plus he should be a scary kind of "werewolf" figure. Something they did very well in the old Batman: The Animated Series. I wasn't crazy about what they did with Killer Croc but it did fit somewhat with the plot of the story and wasn't as crazy as what they've done with him in some of the comics.

The story was okay. It is very violent and a tad bloody, even for a PG-13 rating.

The main problems I had with this video has to do with Batman's son being a 10 year old bad ass who doesn't have super powers but sure looks like it in this movie. There's no other way he could do a lot of what he does. While the character looked and sounded good Deathstroke should not have been in this film if they were going to punk his character they way they did here. Usually the character gets pumped up too much when it comes to fighting and strategy. It's pretty much completely opposite in this one. Given how most of the League of Assassins is portrayed maybe Deathstroke is a badass in their group, because other than Damien, Ras and Talia they all seem to be idiot henchmen and not super ninja style assassins.

If you have no history with Deathstroke (or Man-Bat) this movie will probably be a lot more enjoyable for you. It's not horrible, but disappointing given what DC animation has done in the recent past.

VictoryLapReviewed in the United States on May 9, 2014
3.0 out of 5 stars
Fight scences were too much of a stretch
Verified purchase
First, let me say that I'm a huge fan of several Batman and JLA animated movies, and I'm more than willing to let some things slide when it comes to fight scenes or traveling certain distances, or escape maneuvers. However, when I watch multiple scenes and am consistently thinking: "C'mon really!??", it distracts me from the other positive attributes of the movie such as: the voicing, art work, and sound design (i.e. special effect sounds, background music, etc..).

Instead of bashing this movie for the weak storyline and leaps of reality, I'll leave it at this:
If you're a Batman fan boy like myself, rent it because you know you're going to anyway since we've all been waiting about a year for another DC movie, but don't expect a 4 or 5-star movie; remember, it's up to us to support DC through the good and the bad movies.

If you're not yet a Batman fan boy, then please rent/buy the following movies first; I don't recommend you watch DCU: Son of Batman first, as it is not a good representation of the franchise itself.

DCU, going forward, please invest more heavily in screen-testing these movies with a much broader audience; I was gasping through half of the opening scenes....
4 people found this helpful

NizReviewed in the United States on January 16, 2016
2.0 out of 5 stars
Deathstroke was written completely out of character....
Verified purchase
This movie should've been awesome. After all, it has Batman, the League of Assassins, AND Deathstroke. How could it go wrong? First off, Slade Wilson was written completely out of character. This Deathstroke is just a thug. No code, no pride in trying to be the best, nothing that makes Deathstroke such a cool villain. They should've just made some new character instead of ruining Deathstroke. Second, the absurdity of the story. Gun toting ninjas vs sword toting ninjas using arrow firing Gatling guns, etc. I could go on, but you get the picture. If you love Batman, than by all means, watch this movie. Just don't expect anything good.
One person found this helpful

moreprimelandReviewed in the United States on May 11, 2014
5.0 out of 5 stars
Fairly decent, enjoyed more than I thought I would....
Verified purchase
Especially based on many of the reviews here. :)

First, I've never been a Talia fan or even cared about the Damian storyline, but I did enjoy Jason O'Mara as Batman in the first movie---yeah, he's not Kevin Conroy...but I like him------ so I wanted to give this movie a shot....I thought it was fairly decent...not the best Batman animated movie for sure, but without having read the comic I believe the story regarding Damian was fairly well told....
The best parts for me....really enjoyed the voice actors, I enjoyed Bats, Nightwing, Damian and Alfred for sure and the animation was good.
The worst.... well, it was a very short film, could've been a bit longer and gone more in depth with the story, characters, etc.
All in all, I'm okay that I added this Batman to my the rest of my Batman animation collection.

Lee J. EdenReviewed in the United States on May 15, 2014
2.0 out of 5 stars
Hard to watch
Verified purchase
Animation was decent, but the plot and characterizations are terrible. Alfred and Nightwing were pretty good representations but Batman was uninteresting, Talia and the League of Shadows are laughable, and Deathstroke... I can't even begin to describe how they effectively turned an awesome character into a second string stooge with aspirations of power. It's embarrassing.

I think I should have realized what I was in for when someone blocked automatic fire from multiple opponents. Automatic fire. Oh, and did I mention that the guys with the guns were standing in a circle around the dude with the sword? Yeah, that's pretty much the tone through the entire movie.

What happened to DC and their animation quality? Usually they had great animation AND writing.
One person found this helpful
See all reviews
Back to top
Get to Know Us
Make Money with Us
Amazon Payment Products
Let Us Help You
EnglishChoose a language for shopping. United StatesChoose a country/region for shopping.
© 1996-2022, Amazon.com, Inc. or its affiliates