You've subscribed to Montana Daddies! We will preorder your items within 24 hours of when they become available. When new books are released, we'll charge your default payment method for the lowest price available during the pre-order period.
Update your device or payment method, cancel individual pre-orders or your subscription at
Your Memberships & Subscriptions
There was an error. We were unable to process your subscription due to an error. Please refresh and try again. 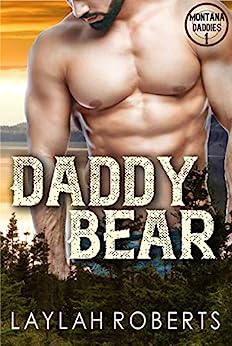 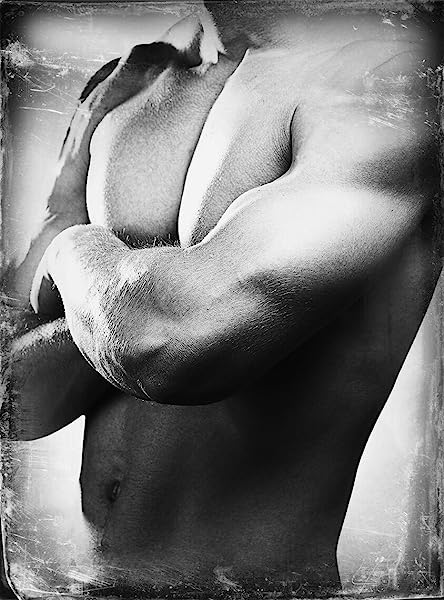 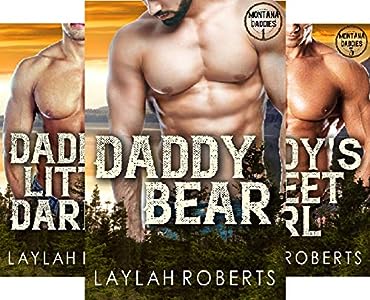 4.5 out of 5 stars
4.5 out of 5
362 global ratings
How are ratings calculated?
To calculate the overall star rating and percentage breakdown by star, we don’t use a simple average. Instead, our system considers things like how recent a review is and if the reviewer bought the item on Amazon. It also analyzes reviews to verify trustworthiness.
Top reviews

HonestlyVala
5.0 out of 5 stars Daddy Bear and little girl!
Reviewed in the United States on January 26, 2020
Verified Purchase
Ellie is a woman who, after living her entire life basically in servitude to her parents, finally has enough and decides to make it out on her own! Great plan, poor execution. She winds up getting hurt during a snow storm and rescued by a hulk of a man named Bear. Since they are stuck together for awhile and she's hurt, Bear let's his daddy instincts come out to play and Ellie decides that, while stuck together, she may as well make the most of it and goes along with it. One thing leads to another, they fall in love, drama ensues because neither is brave enough to admit it, the whole 9 yards.
This book has a happily ever after, and is pretty blunt about who is going to be the male main character of the next book in the series. I really enjoyed this, it was pretty cute, kinda steamy, and the grammar didn't make me want to claw my eyes out. If you're into ddlg, spanking, or romance books, this might be a good pick for you. No butt stuff outside of the spanking(s), no hardcore or even light BDSM, it was really just a very sweet read about a lost woman and the man who could guide her back to happiness and I liked it a lot.
Read more
9 people found this helpful
Helpful
Report abuse

RatherBeReading
4.0 out of 5 stars Every submissive should have a Daddy Bear!
Reviewed in the United States on February 11, 2020
Verified Purchase
So gooood! Although there's insta-love in this, it was necessary for the plot development. Bear just happened to be the right person to find Ellie, at the right time, and have the time to devote to her care and well being. He was her reward after everything she'd been through, and she was his, too. The problem I had with the story is when Bear dropped her off and left her without checking on her. He needed a lot more 'confident Dom' attitude. It shouldn't have been Clint that found Ellie later, miserable and lonely. But Bear made up for his mistake in the end. Such a good story! Very caring and loving HEA. Highly recommend. Could've used a few more details on what she ended up doing about the rest of her life too. I can't see her just sitting home waiting for him everyday. ; D
Read more
2 people found this helpful
Helpful
Report abuse

Beverly Ann McCall
4.0 out of 5 stars Daddy Bear Finds His Little Girl
Reviewed in the United States on November 30, 2020
Verified Purchase
Laylah Roberts did a great job in penning this appealing age play romance;. This is the fist book in this series, Montana Daddies; thus, she introduces other key characters and familiarizes the reader to life at Sanctuary Ranch. In this book, we meet two vulnerable protagonists--Eleanor Margaret (Ellie) Bantler and Bear (Jeremiah) MaCall. I enjoyed the way Roberts reveals the true nature of these two characters. Her plot line is basically a character-driven one and as such we witness how these two go from perfect strangers to a loving couple. Roberts masterfully incorporates literary devices, such as dialog, point of view and descriptive language, to smoothly move her plot forward. The dialog is well developed and the banter between Ellie and Bear is witty and humorous. The dual point of view provides insight to Bear and Ellie. The descriptive language creates vivid scenes. Her descriptions of Ellie's migraines were realistic. As a migraine sufferer I could relate to them. All of these literary devices contribute to pulling the reader into the story. This age play romance is a worthy read and I recommend it. Happy Reading.
Read more
One person found this helpful
Helpful
Report abuse

Carmen Alicea
5.0 out of 5 stars Amazing Read
Reviewed in the United States on July 19, 2019
Verified Purchase
This is a very cute introduction to Daddy Dom for me and I was very impressed with the way the author wrote this story.

Ellie is lonely and heart broken. She feels lost, like she can’t trust anyone. Then she’s rescued and taken care of by Bear.

Bear shows her that he accepts all of her especially her little. He wants to protect and take care of Ellie. He gives her the strength to become the woman she’s always wanted to be. He gives her an open and honest relationship with a man that loves her completely.

This is a very beautiful story and you can really feel how important Ellie and Bear are to each other.

Mary Webber
5.0 out of 5 stars Good Read
Reviewed in the United States on September 7, 2020
Verified Purchase
Loved the romance, the characters, the storyline. I've read a lot of MM Daddy/Little books and the spankings were more arousing for the little. It was the one thing in this story that I had a small problem with - the spankings were painful for the FMC, not sexual or arousing in any way shape or form. It was hard for me to read that. I was fine with the daddy dom and the little girl needing him - but the sobbing, crying in pain, her asking him to stop and then the belt spanking almost had me putting the book down. The lack of sexual arousing made the punishment more demeaning. In any case - that was the only negative I had - I really liked the rest of the story and have purchased the rest of the series (bks 1-8). Oh - there were sexy times, steamy, but not over the top erotic as some daddy/little books tend to be.
Read more
One person found this helpful
Helpful
Report abuse

Erica the stylist
3.0 out of 5 stars Very steamy
Reviewed in the United States on January 7, 2020
Verified Purchase
So here's why I gave it 3 stars.... Warning! May contain spoilers!!!!!

So I loved the basic premise of this book. Bear finding and rescuing Ellie and them basically falling in love. My problem with it was the whole Daddy Dom thing. I've never heard of that before and it was kind of hard to get used to. I didn't even know that was a thing. Im sure some people are going to love that kind of kink but it seemed super pervy pedophile ish. Also there's one thing that kinda bugged me too. It never says how old Best is but insinuates he's WAY older than her. Which again seems overly pedophile ish. Like I said though I liked the book over all just some of it was hard to read.....
Read more
One person found this helpful
Helpful
Report abuse

Trouble
5.0 out of 5 stars "Montana Daddies" is a DDlg lover's ice cream with sprinkles
Reviewed in the United States on August 2, 2019
Verified Purchase
I really like this series of books. The characters all have their unique personalities which are not always shiny and new. The flaws make the stories "pop" and take a boring narrative to the wonderful writing you have here. I love the DDlg aspect of the stories and the should I/shouldn't I dilemmas the characters face. It gives you a warm fuzzy with the HEA with no cliffhanger.

I highly recommend this author and this book!
Read more
One person found this helpful
Helpful
Report abuse

Ann E.
5.0 out of 5 stars Oh yes Daddy!!
Reviewed in the United States on September 27, 2019
Verified Purchase
Daddy Bear has all the good feels you want! You will love the push and pull between the main characters. The author also brings in other characters that will hopefully have their own story down the road, and she does it seamlessly. I am writing this review after having read the second book in the series also, and I can confidently say, you are going to love this series!!!
Read more
2 people found this helpful
Helpful
Report abuse
See all reviews

sue cridge
5.0 out of 5 stars Sleepless night.
Reviewed in the United Kingdom on July 3, 2019
Verified Purchase
What can I say? Fantastic I couldn't put it down, so sometime after 2am I must have fallen asleep kindle in hand and still wearing my glasses... Well that's how I awoke on the morning. It so blooming addictive, and I so fell in love with the characters ,so adorable . Thank you.💗💜💗💜
Read more
3 people found this helpful
Report abuse

Mel
5.0 out of 5 stars An 11/10 must buy read. Then buy more by Laylah
Reviewed in the United Kingdom on September 4, 2019
Verified Purchase
I can't go wrong buying any book by Laylah, and I've bought 23 in the last month! This book was a Daddy, romance, nurturing, protecting, possessive, kink, DELIGHT!!! (Watch out for the bear name reveal). I can see its going to get re-read often. I'm dying to get the 3rd book now, I'm adding Laylah to my list of authors 'bought unseen' list, I'm that certain it'll be an emotionally compelling read, re-read many times over.
Read more
Report abuse

BOOKWORM1304
3.0 out of 5 stars DADDY BEAR
Reviewed in the United Kingdom on July 28, 2020
Verified Purchase
My first Daddy book and it was okay, he certainly sounded delicious, some of it I wasn't sure on but otherwise a nice read even though a bit short
Read more
Report abuse

WildWelshWoman
5.0 out of 5 stars Great book
Reviewed in the United Kingdom on August 16, 2020
Verified Purchase
Why Amazon insist on 20 words for a review via kindle, I don't know. Especially when I just want to say that I really enjoyed this book.
Read more
Report abuse