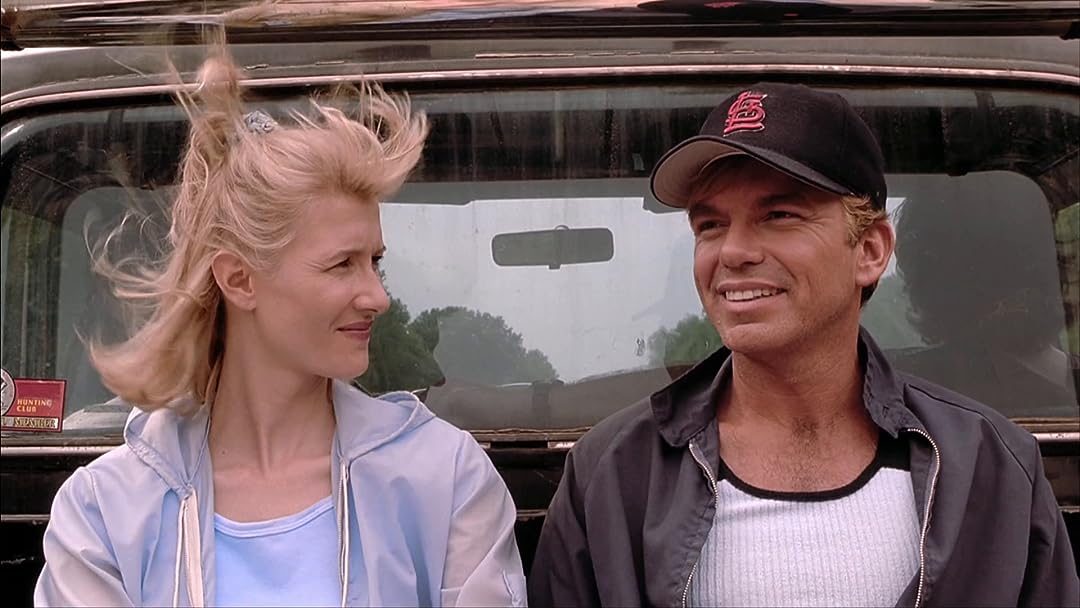 (421)
5.61 h 41 min2001R
When a poor Arkansas family's uncle is charged with murder, a struggling musician and his wife, her mother, her sister, and his father rally to the aid of the jailed uncle.

H. ChartonReviewed in the United States on August 18, 2022
4.0 out of 5 stars
I liked it, and extra star for John Prine
Verified purchase
This movie is well paced, has good jokes, funny cast. Billy Bob is great except for his absurdly fake looking hair- which he features in most of his movies. I find this extremely distracting. Deduct one star. It's like there is a boom mic in every one of his shots. The cast all around is fantastic. And the highlight is John Prine being featured. And make sure to listen to the song at the end.

AudioampbuilderReviewed in the United States on February 26, 2011
5.0 out of 5 stars
For Billy Bob,Laura Dern, and John Prine fans
Verified purchase
It's too bad movies like this fly under the Oscar radar. It is advised for aspiring writers to write about what they know. It would not be right for, say, a-save-your- -confederate-money-boys type to write/direct a movie about decaying urban hip hop types. We do have such movies, and they make a lot of money, too.

Many of us who collect movies, zero in on the stars that consistently produce bona fide literary pieces, like this one ~ coupled with superlative cinematographic artistry-and excellent sound track, I must add. Brilliant choice: to include John Prine in this movie. He is a master at striking chords with a broad spectrum of 'real people'. John actually not only has written a hit one can still hear played on one's "Local Raydio" ( still in 2011 ). John said in his fabulous DVD with Iris DeMent, that the song he wrote for Billy's movie is "loosely based" on the characters....wellllll! ( smile ) John captured the gist of this movie triumphantly.

It is said that True Art is that which accurately reflects its era. "Daddy and Them" is a sterling masterpiece of this genre. This dysfunctional family, replete with room temerature I.Q's, manages to be both laughable and poignant at the same time. We see the boys take their "list" to the liquor store, where they stock up with some five carboard boxes full of liquor bottles. Yet drunkeness is not really portrayed, or that is, our faces rubbed in it~ except for the 'accident scene', which will stick with you forever also. The story remains focused on the stunning, magnificently endearing performance of Billy playing "Claude", and Laura Dern playing his wife, Ruby. They are both insanely jealous of each other's "lovers of the past", and this dynamic repeatedly explodes in a kind of comical roller coaster ride ~ interspersed with a mighty powerful tug at your heart, and moistening of your eyes, whorl-pool tenderness in the form of this interminable, unbridled passion they have for one another.

I have to compliment the casting as flawless. There is a vivid character,Tommy, played by Walton Goggins. ( appeared in Robert Duvall's masterpiece, "The Apostle" ) In this movie he plays a hyperactive, high functioning developmentally challenged pip squeak who charges Jim Varney with "attempted murder". Jim Varney we recall, played the annoying "Earnest" , and sadly has passed away - movie dedicated to him. Jim plays a totally different character, playing the jailbird type wonderfully. Jim Varney, playing Uncle Hazel, is "legally defended" by the winners of the mismatched couple of the decade (...by who IS that?...Jamie Lee Curtis ! and Ben Affleck! )...which ought to cause anyone charged with a serious crime, defended by these attorneys, to break out in a cold sweat.

And who will ever forget Andy Griffith's portrayal of "Daddy"? There is a scene with a fellow ~ beautifully cast, as so typical of a sweet southern boy, whose wife had shot him and left him in a wheel chair. His name is James Michael Andrew. James' conversation with Andy Griffith outside the courtroom will stick with you forever, just as Walton Goggins' acting job will.

It seems the 'little vignettes', like these are so critical to a successful movie. Another critical role is played by Brenda Blethyn, the 'foreigner from England' who adds no small amusement as the 'psychologist who married our jailbird', Jim Varney. It is she who takes it upon herself to point out that no one in the family actually makes a statement, and gets a relevant reply. They all just talk past each other. John Prine plays a pivotal role that just might keep this family from flying apart at the seams.."In Spite of Their-selves"....MAYBE . That's all I can say.I trust I whetted your appetite.

This is definitely one for your permanent collection. I will never part with this one, just as I wouldn't part with Billy Bob in "The Man Who Wasn't There". Another of Billy's masterpieces totally overlooked by the gliteratti of Hollywood.

Stanley C. SargentReviewed in the United States on June 15, 2012
5.0 out of 5 stars
"Down Home" Real, as Only Billy Bob Thornton Can Express It
Verified purchase
I just discovered this gem, and it's a wonderful surprise. I find Billy Bob Thornton brilliant when he plays nut-cases who, we eventually discover, have good hearts; a fine example is his role in "Bad Santa." There's a truth and a reality he achieves that is both hilarious and tragic at the same time.

Just about everyone in this film is off his/her rocker, country stupid, intolerable, and so like a few people I encountered while growing up in Dayton, Ohio; this group (mainly one family) just talks dirtier than the people I ran into there. The characters here are exaggerations of the seemingly self-destructive and self-hating people love to embarrass each other, fight, drink and scream a lot. They are so obnoxious and messed-up that they are loveable ... from a distance. Yet deep down they are family and actually care about each other.

The language is filthy and the topics of discussion (accusations, admissions, etc.) are often very low-down and gritty, so this isn't a film for kids. It reminds me of why I left Southwestern Ohio once I graduated high school and headed for California where the people were very different, at least on the surface. It's nostalgic for me to see the stereotypes I was so happy to leave behind and, in this case, funny as hell.

I highly recommend this film! Everyone from Andy Griffith to "Ernest" is in this film, as well as Billy Bob, Laura Dern, Jaimie Lee Curtis, Ben Afleck and other beloved character actors. It reminds me of the great screwball comedies of the 1930s and '40s updated to an "R" rating for adult content (not a lot of nudity or violence, just classless sex talk and ridiculously funny situations).
6 people found this helpful

bdReviewed in the United States on January 21, 2022
2.0 out of 5 stars
I really wanted to like it
Verified purchase
I only became aware of this film from a John Prine video. He’s in the cast, and was asked to write a song which plays during the end credits. The song, “In Spite of ourselves”, is the highlight of the movie. Every character is quirky, and you have to be careful with quirky, or you end up with ‘just weird with no reason for it, and now you’re just unappealing’…with this great cast, I was thinking that it can’t be as bad as some of the reviews. It was worse.
3 people found this helpful

bearlydadReviewed in the United States on September 5, 2011
4.0 out of 5 stars
Daddy & Them
Verified purchase
Having been a long-time fan of Billy Bob Thornton's movies & John Prine's music, I was excited when I heard that they played brothers in this movie, & HAD to have it!
It's about a family so dysfunctional, they make the Bundys & Simpsons look like the Cleavers (Leave it to Beaver). Andy Griffith, in a departure from his usual 'good ol' boy' roles, plays the father with a severe communication problem, which is passed down to his boys.
Laura Dern is adorable as Billy Bob's wife, trying to keep their marriage afloat, despite the fact that her sister happens to be her hubby's ex-girlfriend.
Jim Varney makes his last screen appearance as the uncle, in jail, who brings the family together in an attempt to bail him out.
Several other rcognizable actors & actresses have smaller roles in this movie, & though it's a bit awkward at times, it's an entertaining ride that leads to a decent ending.
3 people found this helpful

Charlotte Morse CooperReviewed in the United States on February 5, 2022
5.0 out of 5 stars
Funny
Verified purchase
Just a funny movie.

Amazon CustomerReviewed in the United States on May 5, 2021
4.0 out of 5 stars
Funny entertainment!
Verified purchase
Funny! Simply very entertaining!

Barbara KlotzReviewed in the United States on September 24, 2022
1.0 out of 5 stars
would not play in DVD player...
Verified purchase
would not play in DVD player... appears to be a DVD-R copied disc... read side of disc was blue and disc said "DVD-R RECORDABLE"
See all reviews
Back to top
Get to Know Us
Make Money with Us
Amazon Payment Products
Let Us Help You
EnglishChoose a language for shopping. United StatesChoose a country/region for shopping.
© 1996-2022, Amazon.com, Inc. or its affiliates