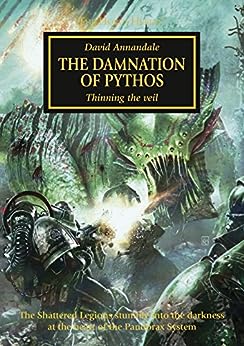 The Damnation of Pythos (The Horus Heresy Book 30) Kindle Edition

by David Annandale (Author) Format: Kindle Edition
Book 30 of 54: The Horus Heresy
See all formats and editions
Sorry, there was a problem loading this page. Try again.

In the aftermath of the Dropsite Massacre at Isstvan V, a battered and bloodied force of Iron Hands, Raven Guard and Salamanders regroups on a seemingly insignificant death world. Fending off attacks from all manner of monstrous creatures, the fractious allies find hope in the form of human refugees fleeing from the growing war, and cast adrift upon the tides of the warp. But even as the Space Marines carve out a sanctuary for them in the jungles of Pythos, a darkness gathers that threatens to consume them all.

Read it because
Following the fate of some of the few survivors of Isstvan as they become embroiled in a daemonic plot, this book gives a unique insight into the fate of the wider Imperium should the Warmaster’s plans succeed.

David Annandale is the author of the Yarrick series, consisting of the novella Chains of Golgotha and the novel Imperial Creed, as well as the Horus Heresy novel The Damnation of Pythos. For the Space Marine Battles series he has written The Death of Antagonis and Overfiend. He is a prolific writer of short fiction, including the novella Mephiston: Lord of Death and numerous short stories set in the Horus Heresy and Warhammer 40,000 universes. David lectures at a Canadian university, on subjects ranging from English literature to horror films and video games. --This text refers to an out of print or unavailable edition of this title.

4.2 out of 5 stars
4.2 out of 5
255 global ratings
How are ratings calculated?
To calculate the overall star rating and percentage breakdown by star, we don’t use a simple average. Instead, our system considers things like how recent a review is and if the reviewer bought the item on Amazon. It also analyzes reviews to verify trustworthiness.
Top reviews

Max
4.0 out of 5 stars An underappreciated close look at the 10th Legion
Reviewed in the United States on April 12, 2019
Verified Purchase
I found myself itching for another Heresy read after taking a hiatus for the past year or so. The amount of books in the series is quite impressive and some find ourselves growing weary of the set up for the end game at Terra. I almost skipped this entry based on the review but I am very glad I didn't. This entry is a first of the series following the legion of the Iron Hands, and Annadale does a great job writing a Legion in crisis. Without their primarch, the marines are wracked by constant doubt and lost amid the growing storms of the warp. Though this novel may not make much progress in the way of the overall Heresy storyline and the inevitable conclusion, it is still very worthwhile for those looking at learning more about the mentality and ways of the Iron Hands, a legion who knows their primarch is gone and struggling to find a way forward.
Read more
One person found this helpful
Helpful
Report abuse

R. Marcus Atihsamy
2.0 out of 5 stars Superfluos
Reviewed in the United States on January 10, 2015
Verified Purchase
Gentle reader, are you familiar with the writing convention wherein the author will build up tension in a series of long, descriptive sentences? Where details and exposition are layered on, setting up a scene in which it is clear something pivotal is about to happen? The words pile up and the reader is primed for a big reveal. Then, the author will break from the previous loquaciousness of prose displayed thus far and punnctuate the action as with the following device.

When used sparingly, this can be very effective in entertaining the reader. When this technique is employed so often that it feels like it's appearing every other page, it wears a bit thin.

It doesn't help that this is a completely superfluous story that hardly merits inclusion in the Horus Heresy. It could have been a passable short story, but as a novel, this work flounders.

anniehill3333
5.0 out of 5 stars The essence of grimdark
Reviewed in the United States on July 27, 2021
Verified Purchase
Mesmerizing, dark, brooding, terrifying. Atticus and Galba are unforgettable characters, as are the Legion serfs who serve with little glory but with the greatest courage and honor.
Read more
Helpful
Report abuse

Reese Martin
5.0 out of 5 stars A Solid HH Installment!
Reviewed in the United States on June 6, 2019
Verified Purchase
I agree with other positive reviews of this HH installment. This is a solid offering and quite enjoyable to read. It is not deserving of the negative criticism! I recommend!
Read more
Helpful
Report abuse

Curry L.
2.0 out of 5 stars Okay, but better as a space marines battles novel.
Reviewed in the United States on April 22, 2015
Verified Purchase
This would have been an okay novel if it was not linked to the Horus Heresy, like the space marine battles series. The pacing is very slow and unfortunately it was a fairly predictable ending and none of the plot twists were really twists. The constant battles were there to build tension but in the end became tedious. If you are looking for something that adds to the HH then you can skip it.
Read more
4 people found this helpful
Helpful
Report abuse
See all reviews

Frances Lynch
3.0 out of 5 stars Rough to say the least
Reviewed in the United Kingdom on October 2, 2017
Verified Purchase
I was attempted to not purchase this novel due to the very bad reviews but I couldn't have a incomplete Horus Heresy collection so I bought it anyway. The characters in the book are very good and the plot holds up..well until half way into the book. What lets the book down is the below average descriptions of the everything when compared to the others books and the fact that characters change their minds and views on things they have held dear in seconds it is a complete change of character. All I can say at least I have read it and its out of the way now.
Read more
One person found this helpful
Report abuse

Ben Davies
4.0 out of 5 stars Another good edition to the Horus series
Reviewed in the United Kingdom on September 12, 2018
Verified Purchase
Another good story from black Library, though I felt it was stretched out far too long as it could have been wrapped up in fewer chapters. More detail is given about the individual chapters and their personal quirks and ideas on what they were created to do! To save mankind? It can be interpreted many ways! When the story eventually gets going it is a pulse beating fight for survival and a very much, ‘I told you so’ ending. Another recommended book
Read more
One person found this helpful
Report abuse

Ross Holmes
5.0 out of 5 stars Brilliant story.
Reviewed in the United Kingdom on January 12, 2020
Verified Purchase
I was wary of this book due to the bad reviews but after reading the book I have no idea what they're on about. I found the story very intriguing and though It doesn't progress the Horus Heresy plot it's refreshing to hear about the broken legions of the drop site massacre. If you're put off by reviews read it and make your own mind up.
Read more
2 people found this helpful
Report abuse

Amazon Customer
2.0 out of 5 stars A really difficult read
Reviewed in the United Kingdom on July 15, 2019
Verified Purchase
Unfortunately I found this book gruelling to read and felt the story added little to the horus herasy. Which is a shame as I was wanted to learn more about the iron hands chapter.

I felt that the characters were poorly developed and the book just didn't flow.
This has been the first book from the series that I didn't enjoy.
This is just my opinion if your reading the series you should still make your own mind up on the book but for me it wasn't a good read.
Read more
Report abuse

Andrew J. Grant
3.0 out of 5 stars A filler book that never really caught my attention
Reviewed in the United Kingdom on September 22, 2017
Verified Purchase
A bit disappointed with this very much "filler" book. I won't spoil the contents but I was reading through the book just waiting for something meaningful to happen and it never really did although the very end does highlight the regressing nature of the Imperium that has already begun before in the 31st millenium.

Worth reading if you are a collectionist like me but not really for the story in particular.
Read more
Report abuse
See all reviews